Smokers will be stopped from lighting up on the streets of North Sydney in NSW in the coming months after a vote was passed at council last week.

“I think this is a historic day for North Sydney,” Mayor Jilly Gibson said.

“It is about nonsmokers claiming back the streets. There are a few smokers unhappy about it but they will get used to it. Cr Gibson said a few smokers who like to smoke on the streets are unhappy about the ban but they will get used to it. Picture: AAP

“Society is changing and tolerance* towards passive smoking* is lowering all the time.”

The ban has overwhelming support from the public with a survey showing 80 per cent of people in favour.

A total of 18 per cent did not support it stating “smokers need somewhere to go” and the “government shouldn’t be regulating* behaviour”.

Cr Gibson has championed* the idea for several years and eventually would like the entire council to have smoke-free streets.

“That’s my ultimate mission,” she said.

“I don’t think it’s impossible at all.” “Smokers not only have more heart attacks, strokes and angina* than nonsmokers, but also at a younger age,” Ms Doyle said.

Ms Doyle said the organisation is now making a submission to City of Melbourne council in Victoria to increase the footprint of its CBD smoking ban. Smoking is currently banned in some Melbourne laneways and other areas.

It is also making a submission to Hobart City Council in Tasmania, which has now committed to expanding the area of its partial CBD smoking ban by April 2020.

Several other councils around the country have a range of outdoor smoking bans in place. Mosman Council, for instance, which borders North Sydney, has banned smoking at all beaches and parks. In 2012 in South Australia, Adelaide City Council banned smoking in Rundle Mall, its main shopping street, and adjoining laneways. 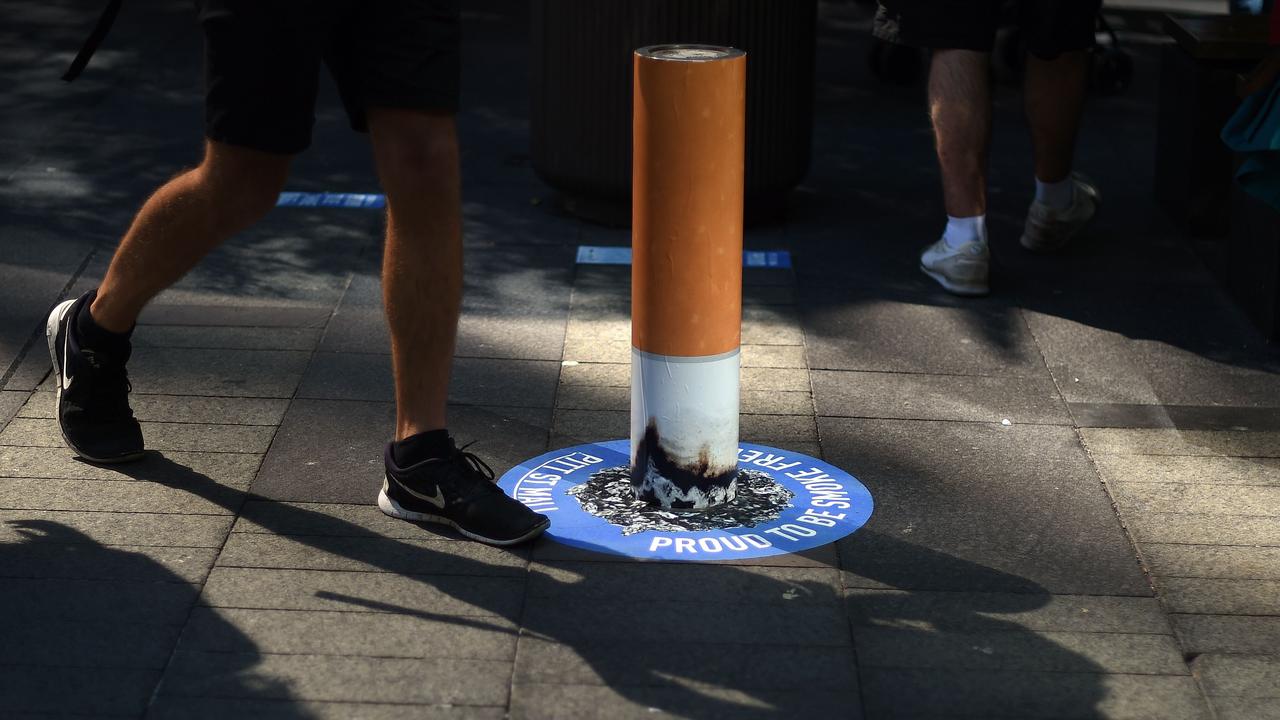 In Australia in 2017-18, just under one in seven (13.8 per cent) or 2.6 million adults smoked daily, with an additional 1.4 per cent smoking some days, according to the Australian Bureau of Statistics’ National Health Survey from 2017-18. These statistics have stayed relatively stable for several years.

CLASSROOM ACTIVITIES
1. Graph and interpret the numbers
Create two pie graphs about the data contained in this article:

b) a pie graph that shows the percentage of people surveyed who support the smoking ban in North Sydney versus those who do not support the ban.

Take a good look at the two graphs and see if you can make any connections between the information. Write a one sentence statement about something you notice.

2. Extension
Design a public announcement poster that could be displayed in North Sydney informing the public of the changes. Make your design simple and clear, including just the details that you think are most important for people to know.

VCOP ACTIVITY
Up in a Puff of Smoke
We all know that smoking is bad for us. But you don’t have to be the smoker to be affected. Write about a time that smoking caused a problem for you. Think about where you were. Was anyone else with you? How did it make you feel? Could you escape the smoke or were you stuck near it?

Finish by sharing how the ban would affect you? If you are not in Sydney, do you want other areas to also pick up the ban?

HAVE YOUR SAY: Would you like more outdoor smoking bans near you?
No one-word answers. Use full sentences to explain your thinking. No comments will be published until approved by editors.