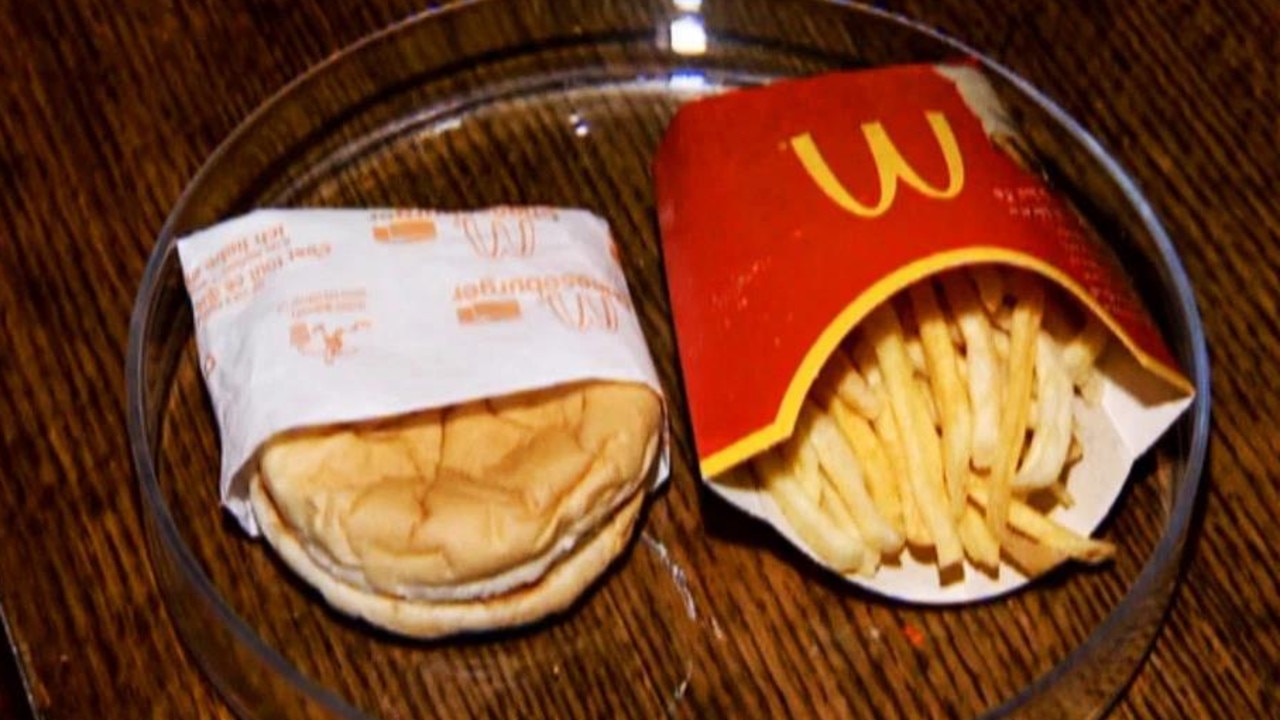 The McDonald's burger and fries, which just had their 10th birthday, with no sign of mould or decay. Picture: Central European News

A McDonald’s fan has kept a burger and fries in a glass cabinet for 10 years – and it still looks fine to eat.

The so-called “indestructible*” McDonald’s meal has no sign of mould or decay.

Back in 2009, McDonald’s closed down all three of its restaurants in Iceland.

One man decided to buy the country’s final hamburger and fries – so the meal could live on after the chain’s closure.

“I had heard that McDonald’s never decompose* so I just wanted to see if it was true or not,” Hjortur Smarason said.

It’s now been exactly 10 years since Smarason made his purchase, and the meal barely looks older. 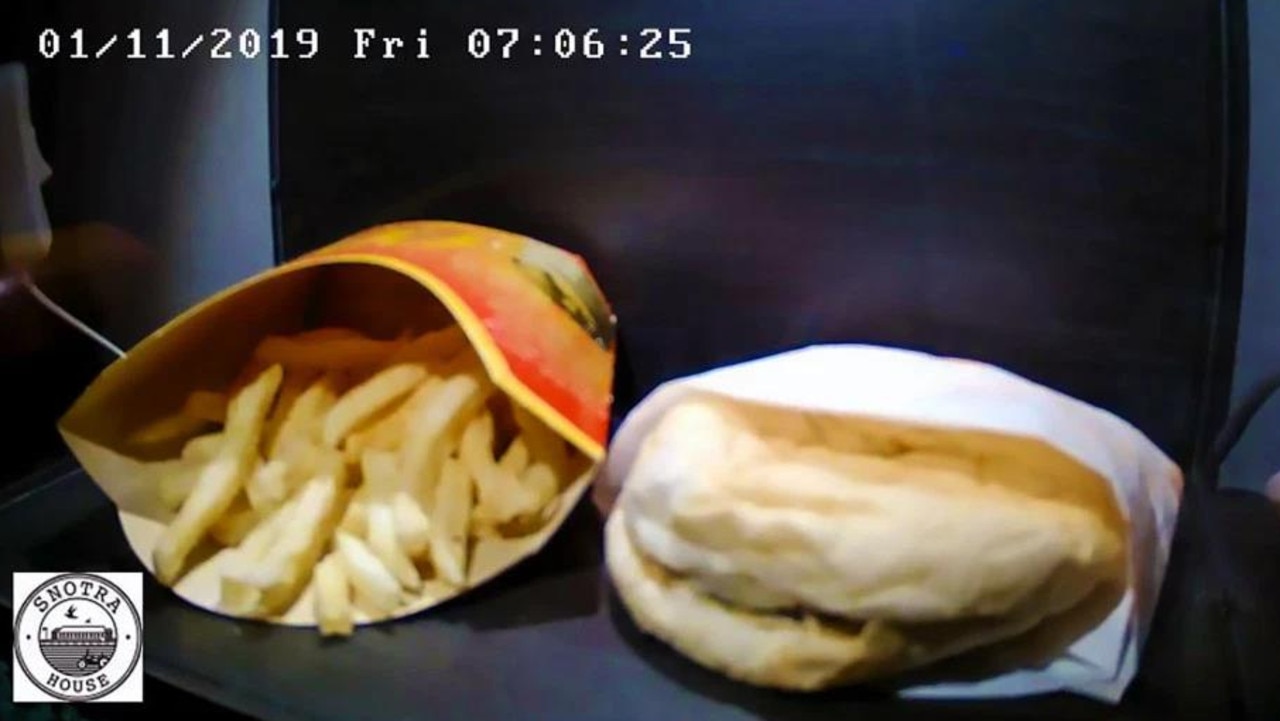 The burger and fries on November 1, 2019, 10 years after they were cooked. Picture: Central European News

The not-so-happy meal is housed in a glass cabinet in Snotra House, a hostel* in southern Iceland.

“It’s a fun thing, of course, but it makes you think about what you are eating.

“There is no mould, it’s only the paper wrapping that looks old.” A McDonald’s cheeseburger the day it was cooked.

The hostel says that people visit from around the world to see the burger.

And a livestream of the meal receives up to 400,000 hits every single day. Tourists visit the burger and fries at the hostel. Picture: Twitter

The meal hasn’t always been kept in a glass cabinet, however.

At first, Smarason stored the burger and fries in a plastic bag in his garage.

After three years, he donated the meal to the National Museum of Iceland – and noticed barely any change in its appearance.

The museum decided that they weren’t equipped to preserve the food and returned it to its original owner.

“I think he was wrong because this hamburger preserves itself,” Smarason said.

The meal was then kept at a different hostel in Reykjavik, Iceland’s capital city, before being moved to its current home.

WHY HAS THE MEAL LASTED SO LONG?
Like lots of processed food products, many McDonald’s foods include added chemicals to the ingredients to make them last longer.

This saves McDonald’s money and means you can get your meals for cheaper than you would otherwise.

These chemicals are called preservatives, which McDonald’s said it adds “only when absolutely necessary, to ensure the food is safe to eat”.

“They will be used, for example, to prevent our bread and cheese from going mouldy and our pickles from spoiling,” McDonald’s explained. 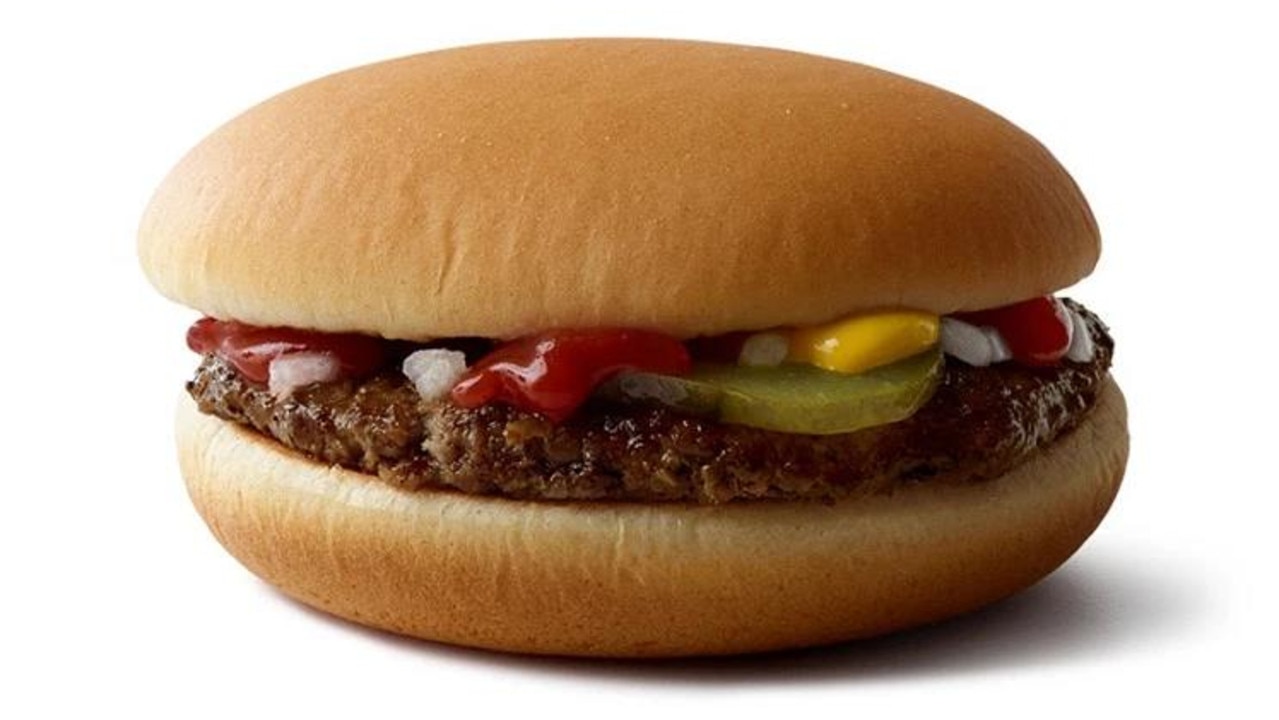 A promotional image of a McDonald’s burger. Picture: supplied McDonald’s in the US announced in September 2018 its seven classic burgers sold in US outlets were artificial-preservative-free, with reformulated* buns and sauces.

The pickle was still to be made with an artificial preservative, but customers could ask to remove it.

“In Australia, we’re taking steps to remove artificial colours, flavours and preservatives from our menu wherever possible,” a McDonald’s Australia spokeswoman said in September 2018.

Ingredients for all menu items are available on the McDonald’s Australia website. According to the ingredient lists, Big Mac and cheeseburgers have preservatives in the bun, pickle and cheese and in the Big Mac sauce.

CLASSROOM ACTIVITIES
1. Exhibit blurb
Imagine that this ‘meal’ has stood the test of time and lasted another 1000 years in its glass container. Long after we have all died and probably long after fast-food chains such as McDonald’s cease to exist.

Schoolchildren in 3019 are visiting a museum and looking at this exhibit. Your job is to write an explanation of this exhibit. You need to explain what the food is, where, when and by whom it was purchased, why it has been kept, why its lack of decomposition is significant, and its possible impacts on our health. Make sure you explain what type of establishment McDonald’s was and why it was popular.

2. Extension
Going beyond the text
Would it have decomposed more or less if it was not contained in a plastic bag or glass box?

How would another fast-food restaurant’s burger or a homemade hamburger decompose?

What do the preservatives do to the food?

Do McDonald’s burgers in Australia have preservatives?

You may have wondered about one of these things or had questions of your own. Write a research question for you to investigate. Under your question write a detailed plan of how you will go about answering your question. Will you need to conduct an experiment? (If so, write a plan for your experiment.) Will you need to research further information? (If so, write down where you think you can get this information from – make sure your information comes from a reliable source or you may get misinformation.)

You do not need to carry out the research or experiment (you can if you have time and are able to), just write a plan for how you would find your answers.

VCOP ACTIVITY
Space Burger
Mr Smarason has managed to buy one of the first test burgers, which is in fact designed to be indestructible so that it could be served in space! The company wanted to ensure that all the items still had the authentic McDonald’s taste and look to them, no matter when and where they were served. The chain had been testing the menu in its Icelandic store due to the extreme weather conditions the country endures.

McDonald’s now has to move fast on a proposal to convince NASA that they should be allowed to open up its first space store — on the International Space Station – before competitors jump on board too. Other stores in other space locations could open in the future.

McDonald’s have said it will be a small step for a burger, but a giant leap for french fries.

Help McDonald’s write the proposal to NASA convincing them that the astronauts should not miss out on the opportunity to buy takeaway after a long day’s work.

When you have finished, write a job description advertising the limited position of working at the new space location. Would you want to apply?

HAVE YOUR SAY: Does it matter to you whether or not your food contains preservatives?
No one-word answers. Use full sentences to explain your thinking. No comments will be published until approved by editors.