Human bodies are changing and experts are blaming modern life, including hours on screens Modern life could be causing big changes to our bodies as we spend more time on screens and less time doing things humans used to do.

Modern life could be causing big changes to our bodies. Not all the possible changes are desirable and some of them are alarming.

From crooked teeth to spiky skull growths to narrower elbows — here are some of the weirdest ways humans’ bodies are changing, as reported by the BBC.

CROOKED TEETH
The way we eat has changed drastically* in the past 200 years.

Our food was once tough and chewy but much of today’s food is soft and processed. And scientists believe this change of diet means our teeth are going crooked.

That’s because chewing helps our teeth grow straight through childhood. Modern foods mean we’re not forced to work our jaws as hard as we grow up.

“In post-industrial* populations, we’re much more likely to suffer from dental problems — dental crowding, crooked teeth, etc,” said expert Dr Noreen von Cramon-Taubadel, from The State University of New York at Buffalo, in the US.

“Having a slightly more biomechanically* tough diet, particularly in children, might be useful for counteracting* some of the imbalance between the way that our teeth grow and develop and push through.” 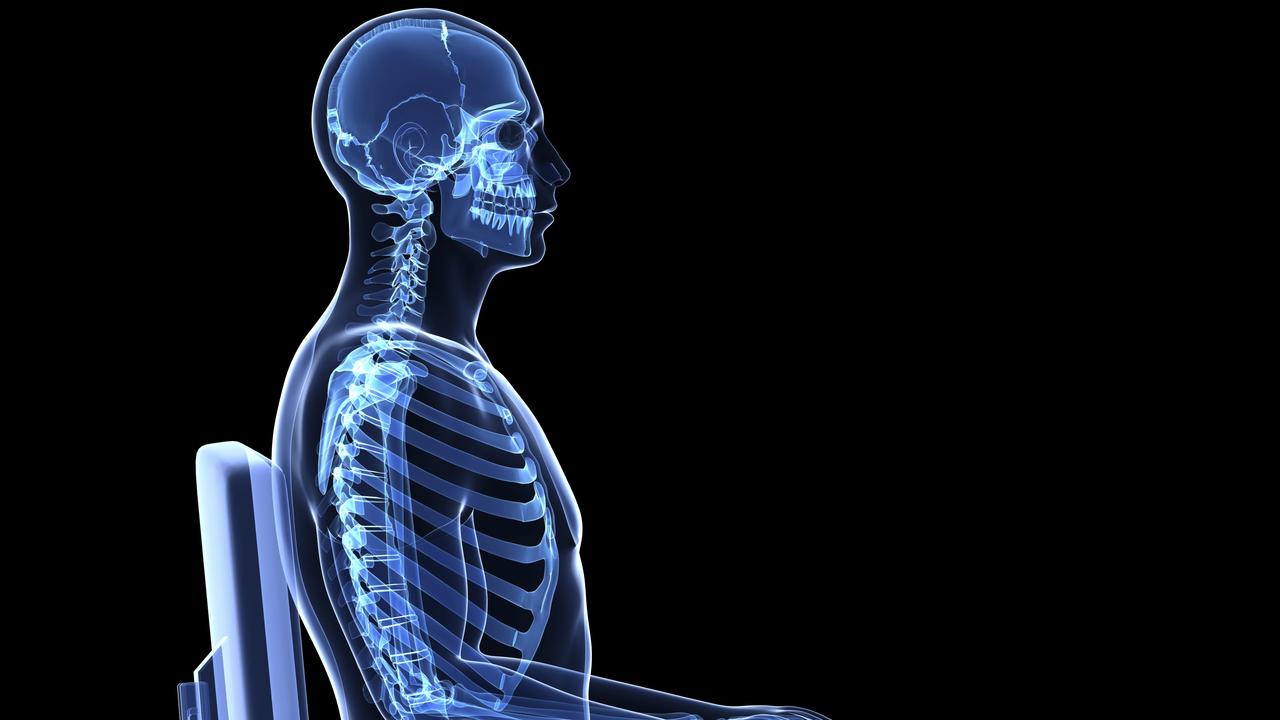 This drawing shows what a human skeleton looks like when a person is sitting up straight. Unfortunately, we rarely sit like this when we’re on devices, bending our upper backs and pushing our heads down and forward.

These lumps, which were extremely rare 100 years ago, jut out from the lower back of the skull, just above the neck.

They’re caused by our obsession with smartphones and other devices, which has us staring at screens for hours every day.

That means we’re craning* our necks a lot more than we used to, forcing the body to compensate. 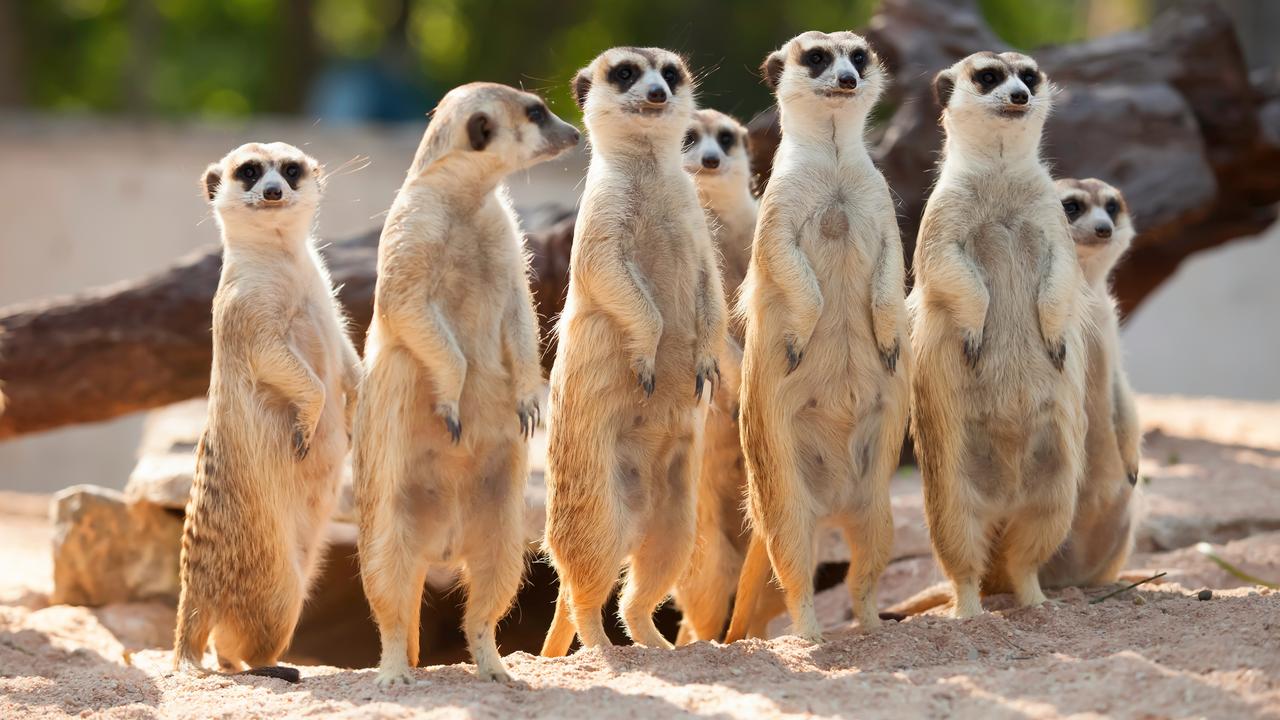 This meerkat family does not use technology and have beautiful posture without spiky growths on their skulls. Picture: iStock

“I have been a clinician* for 20 years, and only in the last decade, increasingly I have been discovering that my patients have this growth on the skull,” said David Shahar, a health scientist at the University of The Sunshine Coast, Queensland.

The lump is a build up of bone where the neck muscles meet the head.

It grows to help our neck support the weight of our heads as we stare out our gadgets.

If you have one, you can likely feel it with your fingers. On bald people, it may even be visible from behind. NARROW ELBOWS
Our skeletons are becoming more fragile due to our sedentary* lifestyles. Bones grow and toughen up as we use them but modern humans walk and stand less than ever before.

In Germany, scientists at the University of Potsdam uncovered an unusual consequence* of our lazy lifestyles.

They found that our elbows are shrinking at a rapid rate — largely because we don’t walk enough. German children studied by the team had smaller elbows the less they walked during the average week.

The change is due to the shrinkage of our skeletons as a whole because we’re sitting down far too much.

SENSITIVE FINGERS
Typing text messages, scrolling web pages, and checking email on our smartphones or tablets could be changing humanity’s sense of touch.

According to one 2014 study, our thumbs and fingers are becoming more sensitive than ever before.

That’s because we’re scrolling, tapping and swiping with our digits* hundreds, maybe thousands of times a day, permanently warping* the way our brain and fingers interact.

Experts at the University of Zurich in Switzerland tracked the brain activity of 37 phone addicts.

Twenty-six volunteers had a touchscreen gadget, such as an iPhone, while 11 preferred retro* keyboard-based mobile phones. Retro phones, such as those in this 2009 photo, often had buttons instead of touch screens. The phone on the left was an early touchscreen and the phone on the right has buttons.

Those who used touchscreens showed more brain activity when their fingertips were touched than those who didn’t, suggesting their fingers were more sensitive.

COMMONSENSE SOLUTIONS
If you like the idea of an “old-fashioned” body, with straighter teeth, sturdy bones, no spiky bits sticking out of your skull, fingers with a regular level of sensitivity and good posture, there are several things everyone can try that are generally good for your health. 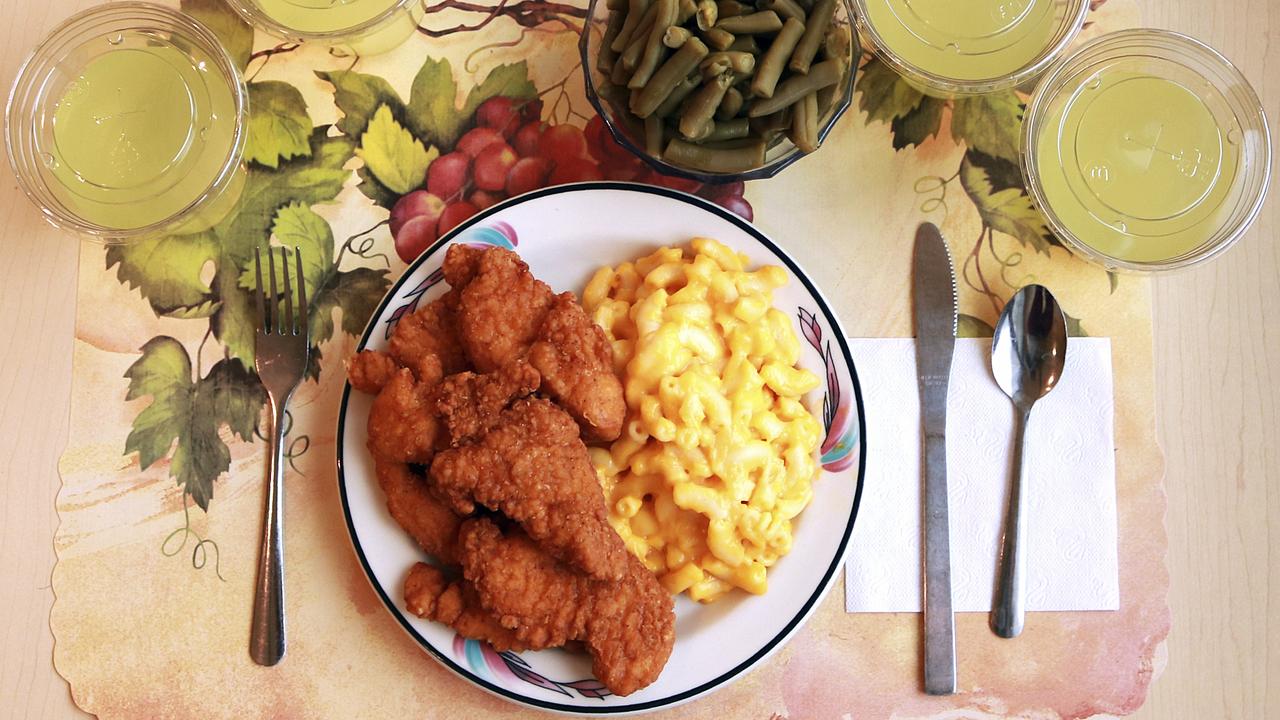 This meal is seen by health experts as an “ultra-processed” lunch including macaroni cheese, chicken tenders, squishy green beans and diet lemonade, none of which requires much chewing. Picture: AP

Limit the time you spend on screens.

When you are on a screen, sit up straight, have the screen at eye level and check your posture frequently to make sure you’re not craning your neck and head forward towards the screen.

Take frequent breaks from your screen.

Get out and move your body as often and for as long as you can.

This story appeared in the New York Post and was republished here with permission.

Screentime can be green time

How much screen time is too much?

Get off that screen for just one day

CLASSROOM ACTIVITIES
1. Skeletal Changes
Draw a diagram of a skeleton and label it, outlining the changes that have been taking place due to the modern lifestyle.

2. Extension
Looking at how our lifestyles have changed and how we live today, what other health issues may we be facing in the future, especially the younger generation as they grow up?

After reading the article, with a partner, highlight all the openers you can find in blue. Discuss if they are powerful and varied openers or not. Why do you think the journalist has used a mix of simple and power openers? Would you change any, and why?

HAVE YOUR SAY: Do you ever get a sore neck or shoulders from using a screen? What could you change about your modern life to keep you healthy?
No one-word answers. Use full sentences to explain your thinking. No comments will be published until approved by editors.