Health authorities issue warnings to avoid foraged fungi, which can be lethal 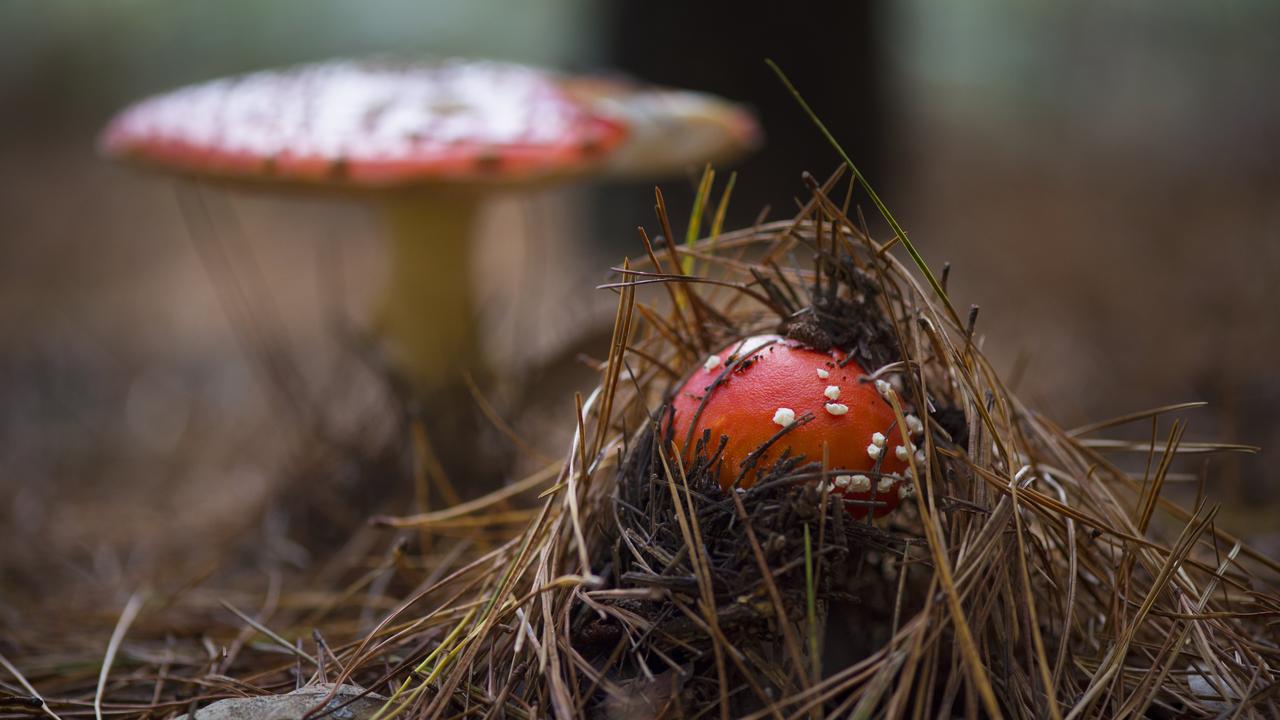 Toadstools that look like they’re out of a fairy garden in a pine forest in Victoria. Picture: Zoe Phillips

At least eight people have been admitted to hospital after eating poisonous wild mushrooms, prompting warnings from health experts to stay away from foraged* fungi*.

The NSW Poisons Information Centre said five of the eight poisoning cases, which were in NSW, were the result of intentionally* eating mushrooms picked from paddocks.

“If not properly identified, mushrooms picked in the wild can make you very ill and could be lethal*, so people should only eat shop-bought mushrooms,” Genevieve Adamo, the co-head of the poisons centre said in a statement.

“Cooking or boiling wild mushrooms does not make them safe to eat.” 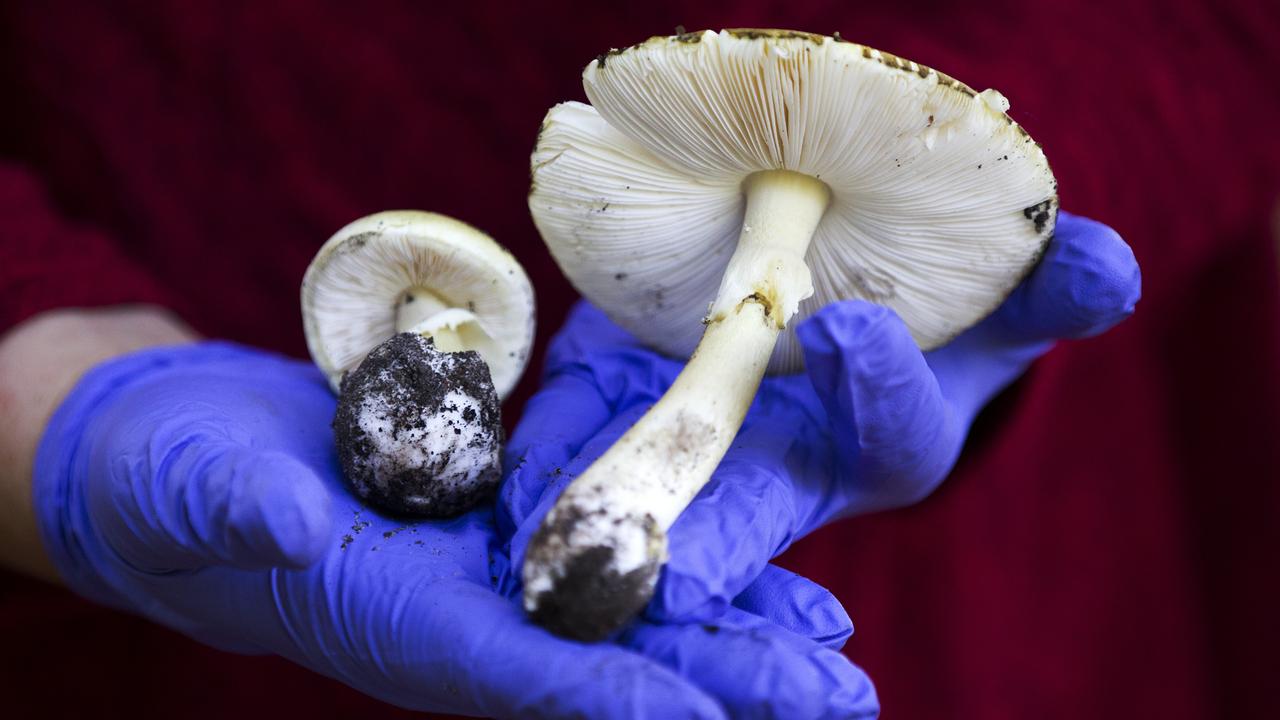 Young (left) and fully grown (right) death cap mushrooms. These are so poisonous they can cause death. Picture: Sarah Matray

There are thousands of mushroom varieties in Australia and only a small fraction of them have even been described.

It’s very difficult for most people to tell the difference between edible* and poisonous varieties. 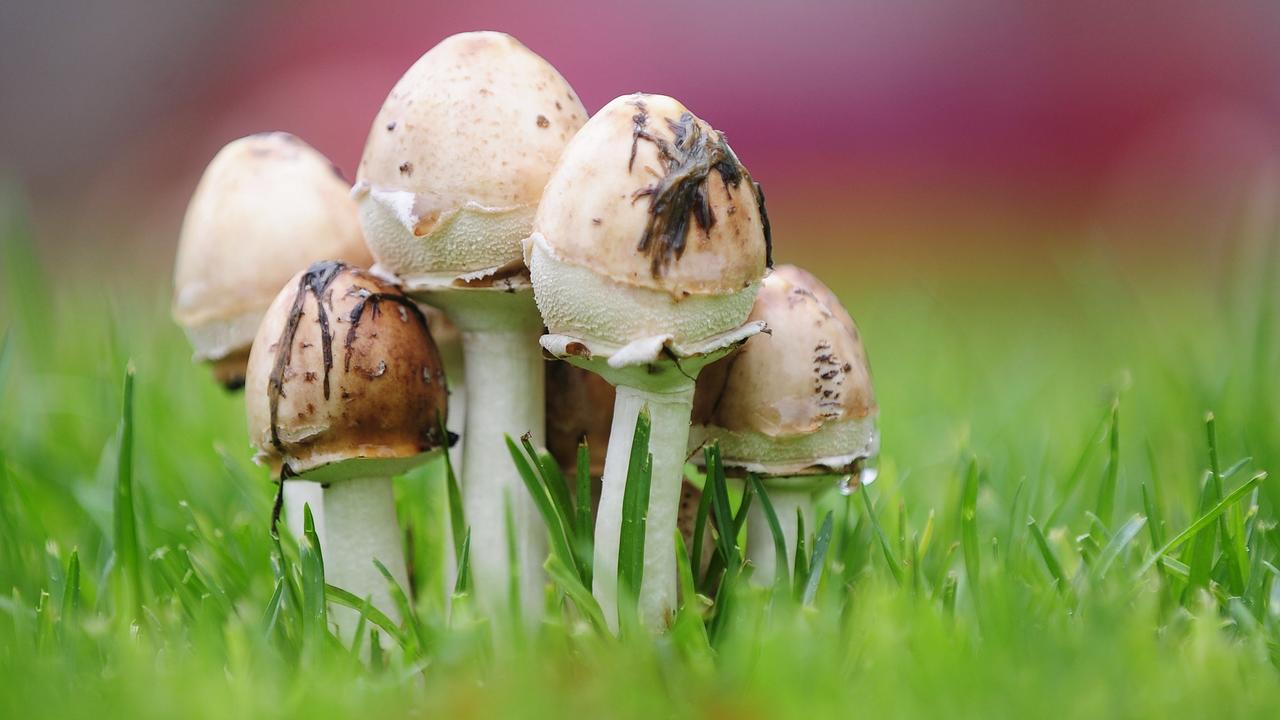 These fungi appeared in a park in Alice Springs, NT, after rain.

In 2018, the NSW poisons centre received 218 calls about wild mushroom exposure* and 70 people were admitted to hospital with poisoning.

Almost 40 calls were made this past week alone with eight people being admitted to hospital. The National Food Safety Information Council has warned against picking and eating wild mushrooms anywhere, as poisonous mushrooms weren’t limited to NSW.

The council also issued a particular warning about one extremely poisonous variety.

“While this latest spate* of wild mushroom poisonings wasn’t from death cap mushrooms, be aware that the poison in one death cap mushroom, if eaten, is enough to kill a healthy adult,” council chair Cathy Moir said in a statement. “Death cap mushrooms can appear any time of year but are more common during autumn a week or two after good rains”.

Death cap mushrooms have been found in Canberra, in and around Melbourne, in northern Tasmania and in Adelaide, Ms Moir said.

MUSHROOM SAFETY
There is no home test that can help you tell the difference between safe and poisonous fungi and mushrooms.

Only eat mushrooms from a shop or other trusted source.

Poisoning symptoms include abdominal or tummy pain, vomiting and diarrhoea.

If you think you or someone else has eaten a poisonous mushroom, call the national poisons advice number from anywhere in Australia 24 hours a day.

Do not wait for symptoms to start.

CLASSROOM ACTIVITIES
1. Write a Jingle
Given that 5 of the 8 cases of poisoning from mushrooms were from people eating mushrooms found in paddocks, people are forgetting the safety advice ‘not to eat mushrooms grown in the wild as you can’t be sure they are safe’.

Sometimes an effective way to get safety messages across is have a catchy jingle that people can refer to. An example is ‘Stop, look and listen before you cross the road’, which has been used to teach children to cross the road safely.

Create a short, catchy jingle that reminds people not to eat mushrooms found in the wild. Your jingle should be short but contain enough information to let people know why they must be careful. It should also be easy to remember and catchy so that it sticks in your head. You could use a tune you already know to accompany your jingle or create your own.

When you are ready, perform your jingle to your class.

2. Extension
What is a mushroom?

Research the common features of mushrooms.

Create a Fact File for someone to be able to identify if a particular plant is a mushroom. (NOTE: this will not allow them to safely identify if a mushroom is poisonous or edible)

Include the following information: what mushrooms generally look like (note there are many varieties which may have varied visual appearances), where/when they grow, how they reproduce, and a safety message about eating them. Also include a labelled diagram showing the common features.

VCOP ACTIVITY
Make a poison’s hotline poster with detailed labelling of the symptoms that may occur due to poisoning and who to call.

Add a clear safety warning about the dangers and causes of poisoning.

With posters like this, the wording needs to be really clear and well written so people don’t get confused. Use your VCOP skills to make sure everyone understands what you are trying to say.

HAVE YOUR SAY: Fungi are fascinating to look at, as long as you don’t touch. Have you ever seen interesting fungi? Describe what you saw.
No one-word answers. Use full sentences to explain your thinking. No comments will be shown until approved by editors.