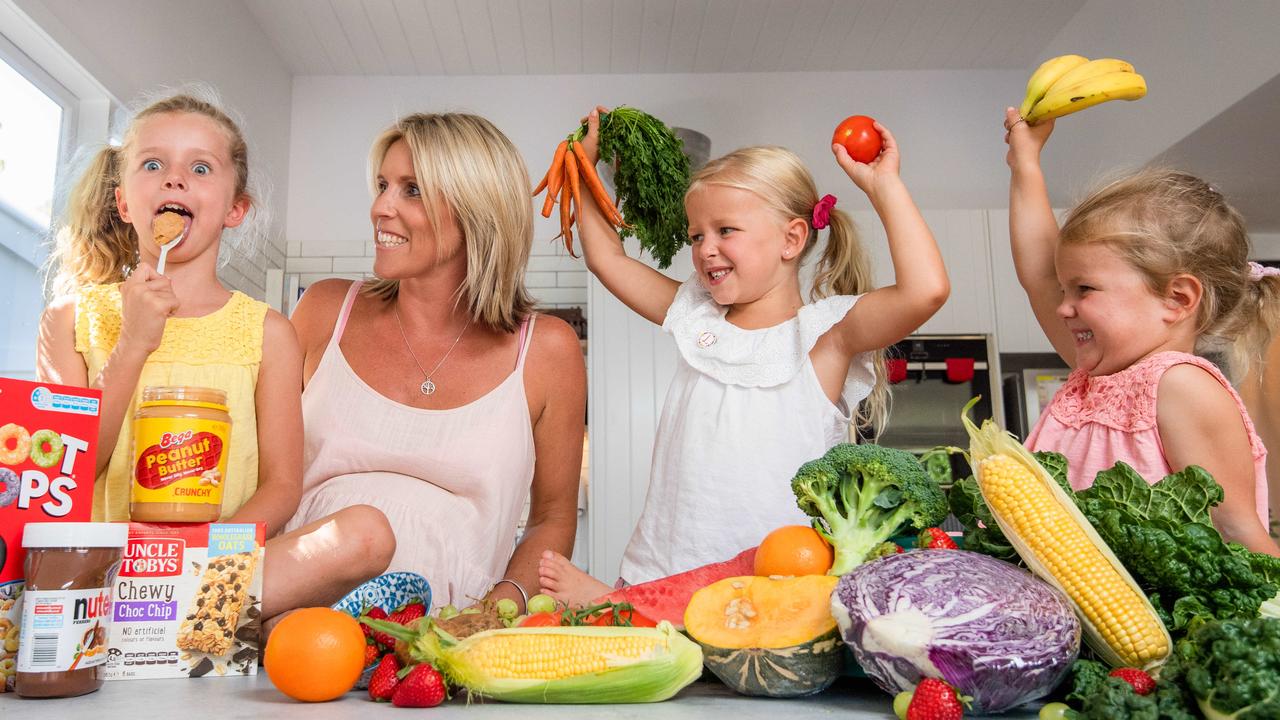 Lucy, mum Lisa, Mila and Josie with fruit, vegetables and other foods. A new report recommends giving fruit and vegies a five-star rating to get us to eat more of them. Picture: Jason Edwards

Australians need fruit and vegetables labelled with a five-star health rating to encourage us to eat more of them.

That’s one of the recommendations* from a major review into the government Health Star Rating system.

It could mean supermarkets would need to display posters explaining fresh fruit and vegetables were five-star items or have fruit stickers displaying the star-rating icon.

Health Star Rating aims to give consumers* information about the nutritional* value and assigns* the food a rating from 0.5 to 5 stars. Not all foods carry a rating as it is voluntary for food producers.

In addition to adding fruit and vegetables to the star-rating system, the review recommends assessing sugar and sodium* content and dairy products differently, which would mean a reduction in the number of stars currently given to hundreds of products, such as Vegemite, breakfast cereals like Nutri-Grain and Milo, muesli bars and sugary yoghurts.

Plain water would receive a five-star rating, flavoured waters 4.5, 100 per cent fruit and vegetable juices between 2.5 and 4 stars, diet drinks no more than 3.5 stars and sugary soft drinks between 0.5 and 2 stars. These products currently have a high rating, but some could lose stars under a revised system. Picture: Nathan Edwards

There is no recommendation for the system to become compulsory but sets targets for 70 per cent of products to be included within four years, up from 30.5 per cent in Australia currently.

The report is the result of public forums* and submissions from people or companies with an interest in how the Health Star Rating system is structured, such as health professionals and food producers.

“It is a tool families can use to make healthier choices by comparing similar foods,” she said. Currently, the Health Star System only includes packaged food and is meant to help us compare similar foods. You can see some of the star ratings in blue on the packaging.

Executive Manager of the Obesity Policy Coalition Jane Martin said the system should be made compulsory.

“This shouldn’t be opt out* and we saw mandatory* country of origin labelling introduced within a year successfully,” Ms Martin said, referring to the national compulsory food labelling system introduced on July 1 last year.

“The reality is it is being used as a marketing* tool and often products in the same category with the same manufacturer are either including or not including star rating if it suits their purposes.”

“What we need is to put this effort and money into making fresh fruit and vegetables more accessible* financially* for consumers and showing them what to do with it,” Ms Zaslavsky said. Aria, mum Tara and Melody with some vegies. Some people believe giving fresh produce a five-star rating will make us eat more of them. Others believe we should concentrate on making fresh produce affordable. Picture: David Swift.

The final report into the Health Star Rating review will be released in May.

FOODS THAT COULD LOSE STARS

FOODS THAT COULD GAIN STARS

Call to ban lollies at checkouts

Call for salad and water to replace cola and fries

After reading about the government’s new Health Star Rating plans, write at least 2 foods that may fit into each of the columns starting from unhealthy (0.5) to healthy (5). There are some suggestions in the article, but you will also need to add some of your own based on the information in the article

2. Extension
Use a copy of your school canteen menu (your teacher could give to you or could get off your school website) to rate some of the food options according to this new Health Star Rating system. Rate your canteen menu overall as a number of stars.

HAVE YOUR SAY: Do we need star ratings for fruit and vegetables?
No one-word answers. Use full sentences to explain your thinking.