Mr Ogg, 33, survived severe smoke inhalation* and burns to 95 per cent of his body in a house fire in December 2018. He became the first to benefit from the new technique.

Surgeon John Greenwood got sick of seeing burns patients with limited options. So he developed a skin farm — otherwise known as the composite cultured skin (CCS) technology — in the skin engineering* laboratory at the Royal Adelaide Hospital in South Australia.

Professor Dr Greenwood was a South Australian of the Year in 2016 and was a key surgeon treating the Bali bombing victims in 2002, many of whom were badly burned.

Dr Greenwood treated Mr Ogg by removing his deep burns, then taking a graft* from his scalp to grow 26 large CCS flaps of skin over five weeks, each 25cm by 25cm and 1mm deep. Burns surgeon Dr John Greenwood with a sheet of composite cultured skin in a container at the Royal Adelaide Hospital. Picture: Tom Huntley

In mid-January, the first batches of the CCS were ready and Mr Ogg began undergoing the surgeries to completely close his burn wounds.

They eventually covered 50 per cent of his body. The remainder was treated by traditional grafts, in which healthy skin is taken from one part of the body and moved to replace injured skin. The hands of burn patient and survivor Glenn Ogg on Friday, June 21. With world-first transplants of composite cultured skin, Mr Ogg has made an incredible recovery in just six months. Picture: AAP

“Not only did Glenn benefit enormously from this new technology, his initial treatment included another cutting-edge technique known as biodegradable temporising matrix (BTM) … also developed here in Adelaide,” he said.

“(That) works by not only ‘holding’ the burn wounds in a healthy condition, but improving them, for the five weeks it takes to grow CCS and was pivotal* in the early survival and progress of the healing of Glenn’s wounds.

“Every aspect of how these two technologies works together has seen Glenn not only survive, but make a remarkable recovery in less than six months.” 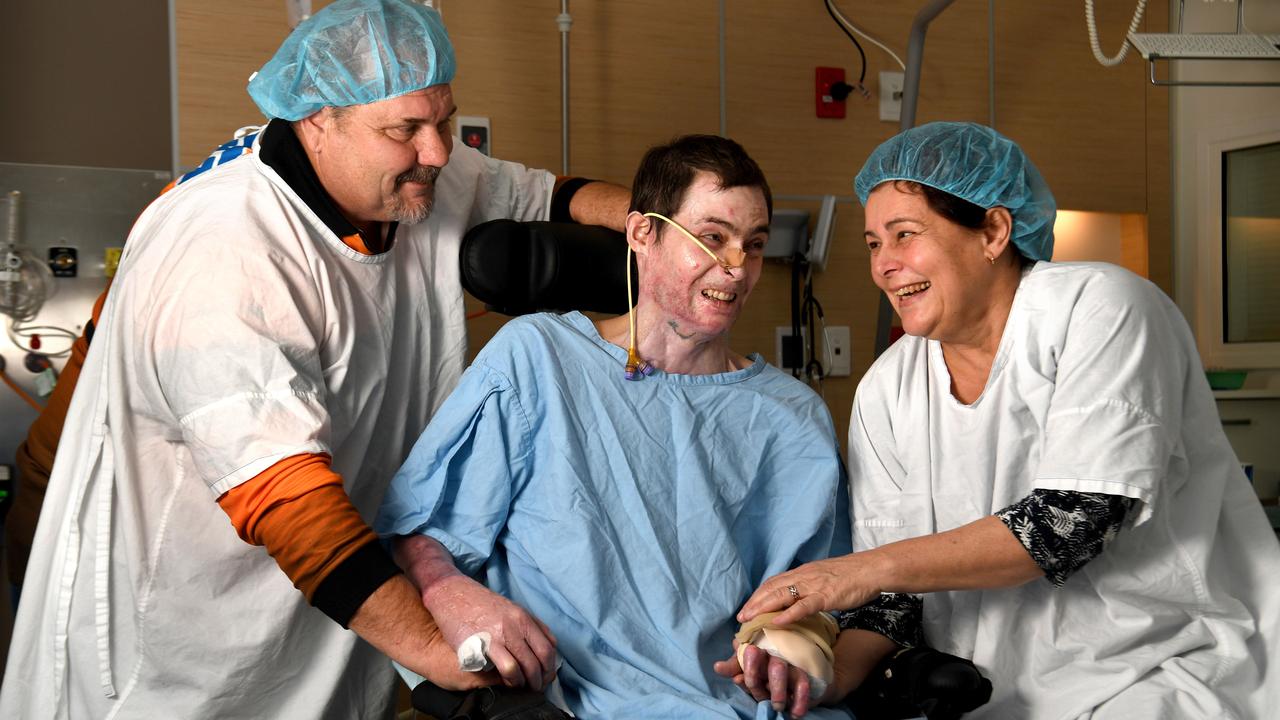 In a comparable case reported in the UK, a patient spent more than 40 days in the ICU, and left hospital after a year still unable to walk.

Dr Greenwood noted in many similar cases patients do not survive and, when they do, they usually depend on a ventilator for months, and often experience severe kidney failure from their injuries.

Mr Ogg has spent six months in the RAH and will likely be transferred to a rehabilitation centre later this month. Further trials of CCS have been approved.

CLASSROOM ACTIVITIES
1. Sentence stems
Complete these sentences to show your understanding and thinking about the news article.

2. Extension
There are some tricky medical words included in this article. Choose 3 that haven’t already been defined in the glossary:

HAVE YOUR SAY: What sort of inventor would you like to be? Would you like to invent some sort of technology? A medical solution? A food? Something fun?
No one-word answers. Use full sentences to explain your thinking. No comments will be published until approved by editors.