Prime Minister Scott Morrison has tested positive to Covid-19 and will isolate for seven days with his family at home in Sydney. Picture: NCA NewsWire/Gary Ramage

Prime Minister Scott Morrison has tested positive to Covid-19 and is experiencing “flu-like symptoms”, but will continue to work from isolation.

Mr Morrison released a statement late on Tuesday night confirming he had contracted* the virus and would be “recovering over the next week.”

“I had tested myself daily since Sunday, including this morning, with all tests returning a negative result,” he said. “I took a further test this evening after developing a fever late today.”

Mr Morrison said the further test was “inconclusive*,” so he took a PCR test which returned a positive result late on Tuesday.

“I am continuing to follow health guidelines and am isolating at home in Sydney,” he said.

“Jenny and the girls have thankfully tested negative but will isolate for seven days at home as close contacts.” Before testing positive to Covid-19, Prime Minister Scott Morrison met with the national security committee of cabinet on Ukraine and the Australian floods, then attended an outdoor press conference at Parliament House in Canberra. Picture: NCA NewsWire /Gary Ramage

After the Prime Minister officially confirmed via Facebook that he had contracted Covid, fellow Liberal Party members sent “get well” wishes.

Deputy Leader Josh Frydenberg kept his wishes brief, saying, “Rest up, PM!” among thousands of others in the comment thread.

Another female colleague, MP Gladys Lui told the PM to “rest well” and said “hope your Covid is mild like mine”. Prior to receiving a positive PCR result, Prime Minister Scott Morrison met with Defence Minister Peter Dutton and others at Parliament House in Canberra, but under current Covid health orders Mr Dutton is not automatically required to isolate. Picture: NCA NewsWire/Gary Ramage

Mr Morrison said he would continue his responsibilities as Prime Minister while isolating, including virtually chairing meetings of the National Security and Expenditure* Review Committees of Cabinet.

“(The government will be) focusing on our emergency response to the devastating floods in Queensland and NSW, and ensuring we stand with each and every one of the affected communities both now and as the waters eventually recede*,” he said.

“I will also be focused on our urgent response to the tragedy unfolding in (Ukraine) and Russia’s senseless aggression, staying in regular contact with our security and intelligence officials and our international partners, as well as working with the Treasurer to finalise the Budget.” 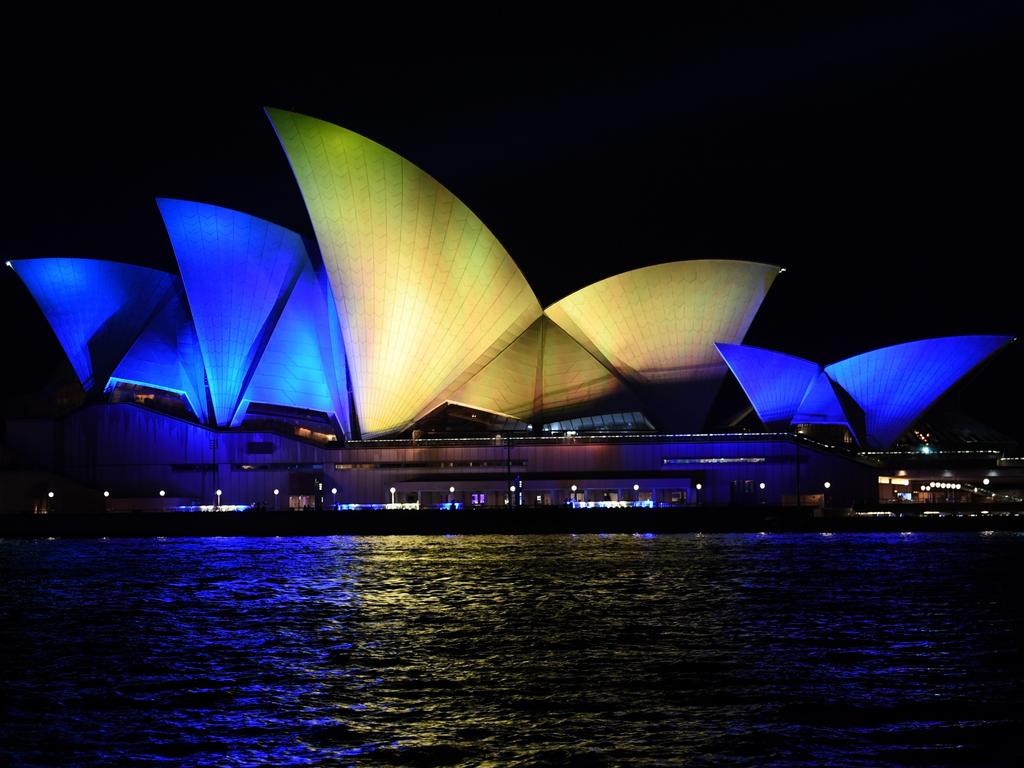 Mr Morrison had said the illumination of the Sydney Opera House was “intended to send a very strong message from one of the world’s most iconic buildings that Australia stands with Ukraine”. Picture: James D. Morgan/Getty Images

Mr Morrison had been due to attend the Sydney Opera House with NSW Premier Dominic Perrottet on Tuesday night when the building was lit up in the blue and yellow of the Ukrainian flag, but pulled out of the event at the last minute.

Earlier in the day, Mr Morrison had said the illumination was “intended to send a very strong message from one of the world’s most iconic buildings that Australia stands with Ukraine”.

His only public appearance that day was a press conference held outdoors at Parliament House in Canberra.

It is not yet known if any of Mr Morrison’s staff or government colleagues are required to isolate as only household members or people who interacted closely with a Covid-19 positive person for a long period of time are considered close contacts under current Covid-19 rules. 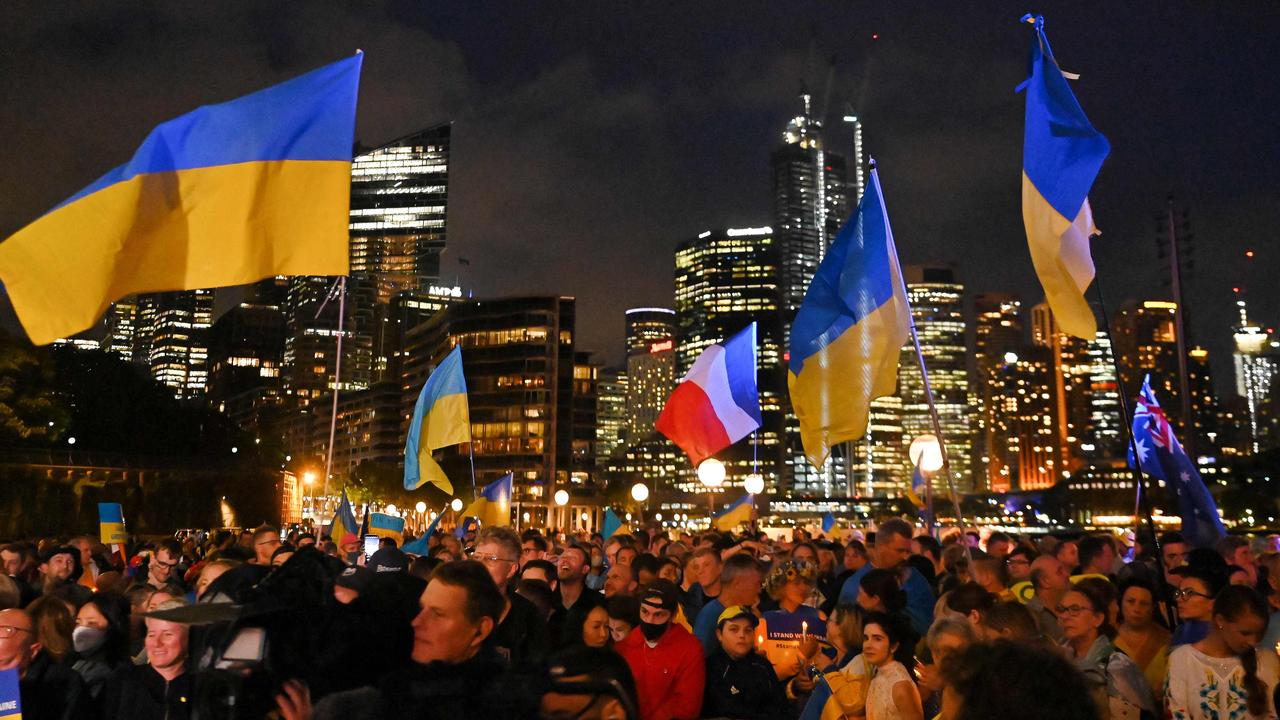 Mr Morrison had been due to attend the Sydney Opera House event in support of Ukraine on Tuesday night. Outside, members of the Australian-Ukrainian community and supporters participated in a peaceful protest against Russia’s invasion. Picture: Steven Saphore/AFP

Queen Elizabeth II has meanwhile resumed royal duties after she was forced to cancel engagements due to Covid. Her Majesty held two virtual audiences on Tuesday, Buckingham Palace said.

There had been concern for the 95-year-old monarch’s health since she tested positive on February 20, overshadowing* the start of her record-breaking 70th year on the throne.

But a palace statement indicated she was now well enough to hold engagements, hosting the new ambassadors* of Andorra and Chad from her home at Windsor Castle. It was back to business for Britain’s Queen Elizabeth II, as she appeared via video link from Windsor Castle on Tuesday to receive Andorra and Chad’s new ambassadors to the United Kingdom. Picture: Victoria Jones/POOL/AFP

The Queen became the first monarch in British history to reign for 70 years on February 6, and public celebrations are planned to mark her remarkable Platinum Jubilee* in early June.

Why kids are better at fighting Covid

Keeping the world safe from Covid

Design a special “get well” card for either Scott Morrison or the Queen. The artwork on your card and the written message must use information from the story to encourage them to be well enough to carry out their jobs.

Imagine that you had to take Scott Morrison’s place as Prime Minister while he has Covid. Write diary entries covering two days of your time in the job.

Everyone is sending well wishes to our Prime Minister hoping for a speedy recovery, and the Queen has now returned to royal duties after contracting Covid as well.

Think of a time when you have been sick or unhappy. How did you feel? What made you feel better?

Now, think of someone you know who might be sick or unhappy for some reason (it could be a friend, relative, teacher or one of the people mentioned in this article). Make a card or use the one you designed in the activity above – it is time to write a heartfelt message inside. Use empathetic language relating back to when you were unwell.

See if you can include some tips for how to feel better. Maybe some special food, a game, or activity they could do.

Include instructions and materials they might need in case they can’t leave the house.

Make sure your instructions are clear and sequential so they can easily follow them.