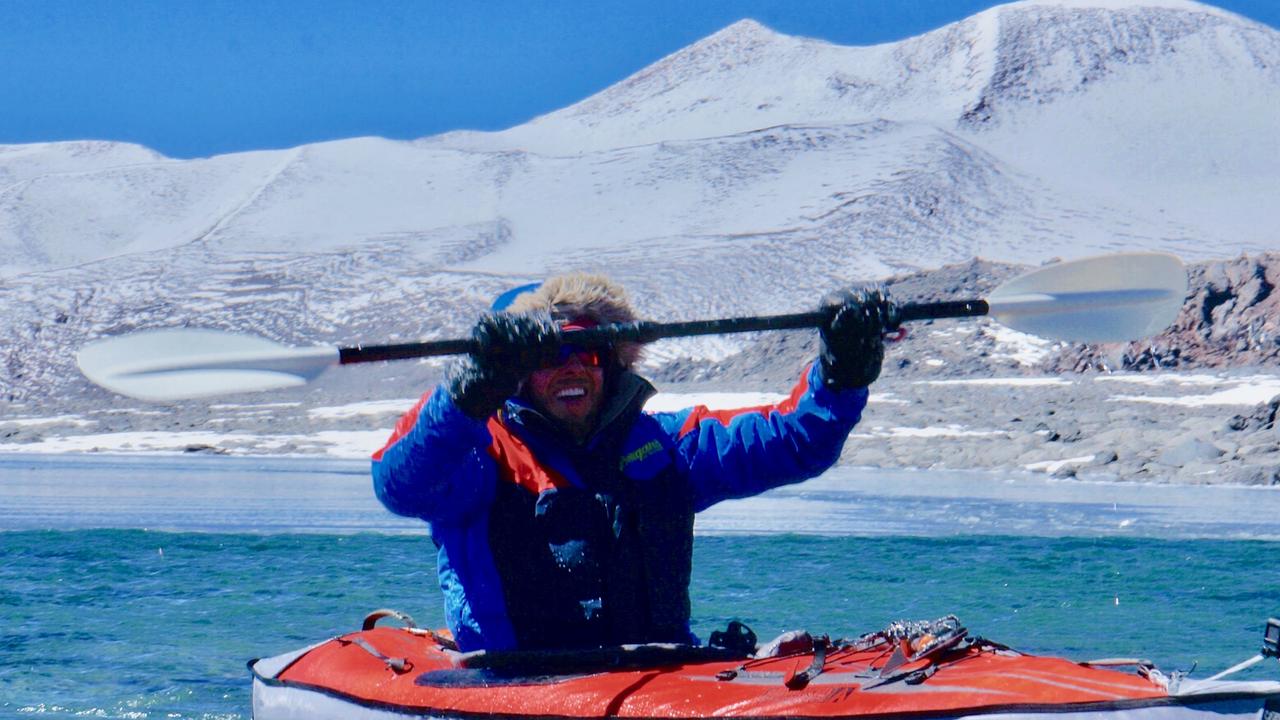 Australian Dan Bull has broken a world record for kayaking at high altitude.

An Australian man has paddled 2.5km in an inflatable* kayak on an icy lake 5707m above sea level to claim a new world record.

Dan Bull had planned to swim in the world’s highest lake at Ojos Del Salado on the border of Argentina and Chile in his Speedos, but had to change his plans when he arrived to find the lake was frozen over.

He had carried a folding, 20kg kayak, in case he was unable to swim. But it wasn’t easy to claim the world record for the Highest Kayak on Earth. The water was -1C and he had to use an ice pick to create a lane to paddle through the water with air temperatures at -15C.

“I knew if I had rolled out of the kayak it would have been deadly,” he said.

“I was out there for 45 minutes, I used an ice axe to actually pull myself along the ice to break the surface.”

The Guiness Book of World Records has confirmed Bull’s achievement, which he completed without an oxygen mask.

Amazingly, it is his second world record after becoming the youngest person to climb the highest mountain and volanco on every continent*.

Bull, who trained for months for his swim, was initially* “crushed” that the lake at 6400m above sea level had frozen over.

He found a slightly lower lake, which had a thin layer of ice, and was able to find a way through on March 7 this year. 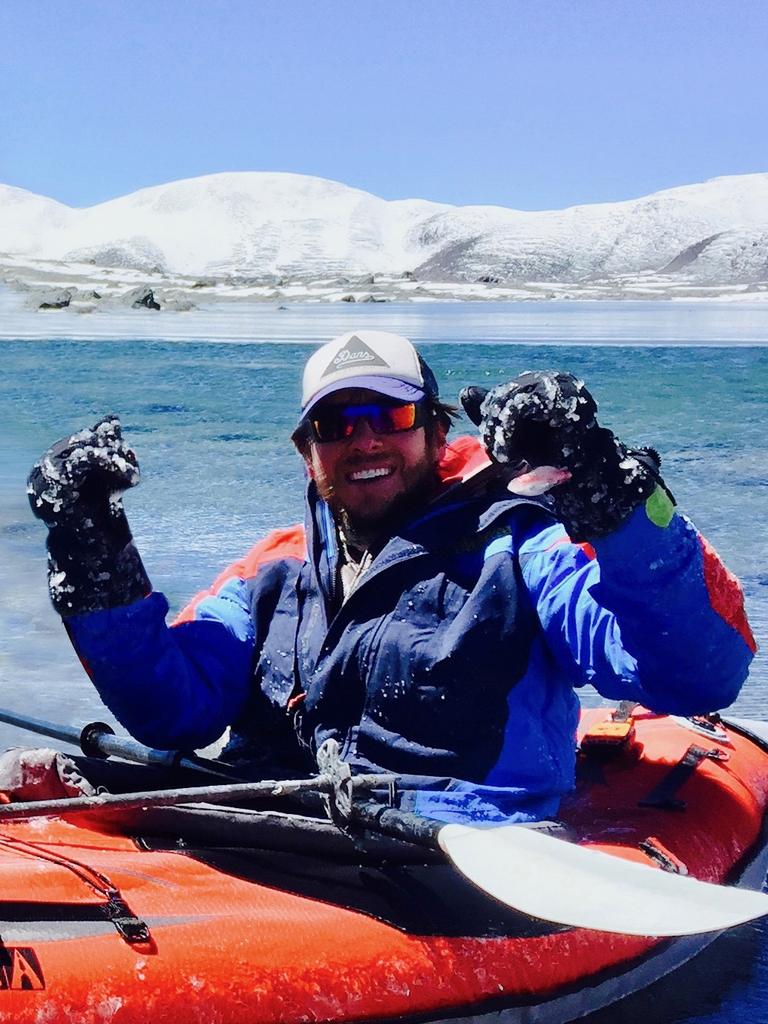 View from his kayak.

“In the face of all that adversity* to turn that around, I’m more proud of that than if I had have achieved the original plan,” he said.

Bull now has back pain, requiring medical attention, as a result of his trek, carrying up to 30kg of gear, including the kayak. But he said he was grateful for his support team of three Chilean climbers whom he had met on a previous climb in the Andes.

They took photographs of his journey and were shouting support in Spanish.

Bull decided to cut short his adventure because he was worried about them “almost freezing” on the shore.

They managed to recover the kayak and bring it back to base camp.

“I always try to only leave footprints and just take memories,” Bull said. 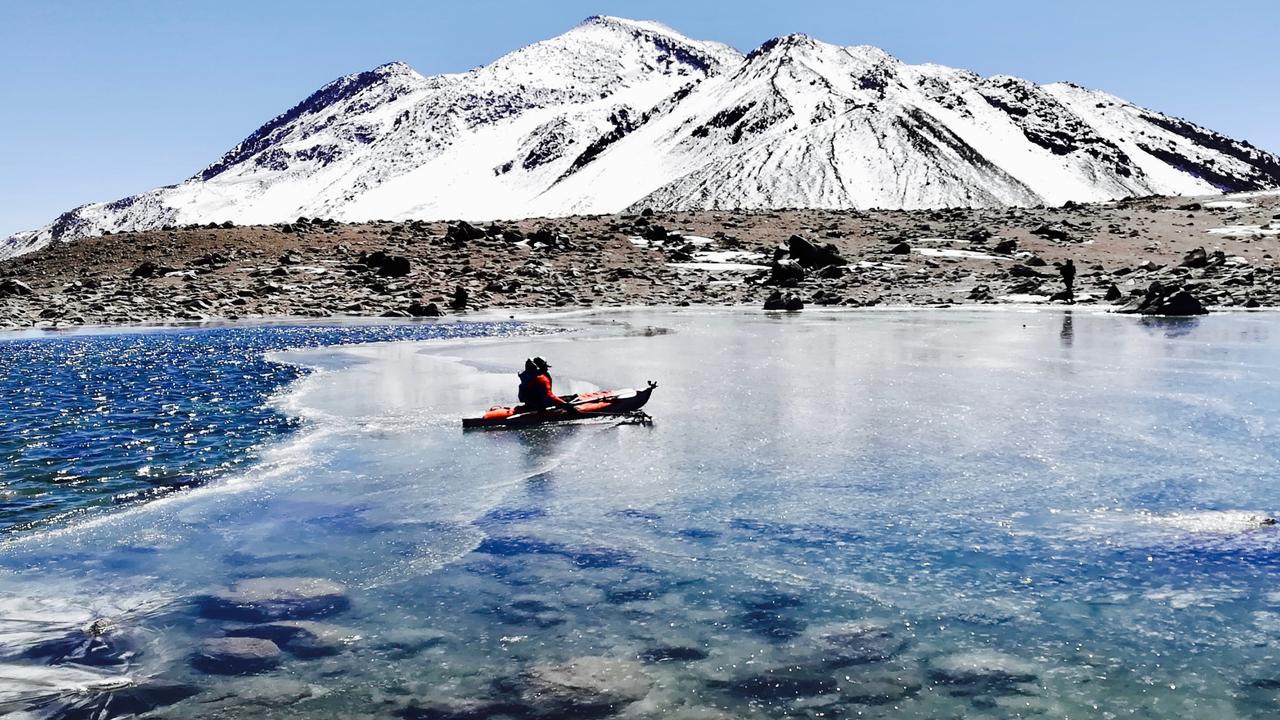 The view was stunning from the 5707m high lake.

HIGH ALTITUDE AND THE HUMAN BODY

Altitudes* above 1500m start to affect humans and the way our bodies work.

Humans cannot live in very high altitudes above 5500—6000m because there is less oxygen to breathe.

This can cause illnesses such as altitude sickness which cause headaches, vomiting, inability to sleep and reduced performance and co-ordination.

In severe cases, fluid can build up within the lungs, brain or both, which can be deadly.

First aid options include descending* immediately, medication and the use of oxygen masks and tanks.

Climbers and people who live on high mountains can get used to the altitude, but it takes a long time.

Above 8000m, the human body cannot make the required changes and will eventually die. Because several of the world’s tallest mountains are this high, climbers usually take oxygen tanks and only stay at the peaks or higher levels for a few hours.

Pilots, astronauts and other people who travel quickly to high altitudes need to be in a space suit, pressure suit or inside a pressurised* airplane, so the air is still the same as on the ground.

Amazing Australians in the 2019 Guinness Book of World Records

inflatable: capable of being filled with air

adversity: a difficult or unpleasant situation

altitudes: distances above the ground

1. What sort of kayak did Dan Bull use and how much did it weigh?

2. Which record had he planned on breaking?

3. How cold was the air temperature during his paddle?

4. How did he manage to kayak through the ice?

5. Where did he break the record?

1. Dan Bull has earned a new entry into the Guinness Book of World Records. Use the information in the article to write a speech for an awards night where he receives a certificate for his latest world record. Pretend you are introducing Mr Bull before he receives his certificate. Include who, what, where, when, how and why in your speech. You may include any other information you think is relevant. Your speech should go for at least 1 minute. (Not as easy as it sounds). When you are happy with your speech present it to your class with expression.

2. Extension: Although you most likely have not met Dan Bull, what personality traits or characteristics do you think he must possess to be able to achieve these world records?

Make a list of the characteristics and why you think he has this trait.

Goal driven – he has worked towards and trained for these world records.

You could present this in a table/chart.

HAVE YOUR SAY: Name a world record you would like to break?