Victoria has had a spike* in new COVID-19 cases in recent days, sparking concerns about how that could impact Australia’s economic* recovery and delay the lifting of travel restrictions.

And the AFL’s planned Monday announcement of the fixture* for rounds six and seven was delayed after Essendon player Conor McKenna’s positive tests for COVID-19 on Friday and Saturday. Sunday’s match between Essendon and Melbourne was postponed*.

STATES REVIEWING PLANS
Queensland is reviewing when to reopen its borders after Victoria recorded nearly 100 new COVID-19 cases in the five days to Sunday.

Victoria recorded 16 new cases in the 24 hours to Monday morning. There were 44 recorded infections over the weekend — and only five from overseas travellers returning to the country — with the state government reimposing* restrictions on family gatherings, and postponing plans to increase the number of customers in restaurants and cafes from 20 to 50 from Monday. Victorian Premier Daniel Andrews announces planned relaxing of some restrictions has been postponed due to a rise in new COVID-19 cases at a media conference on Saturday June 20. Picture: AAP

The rise in Victorian cases — in contrast with other states, which have recorded few if any new infections in the past week — comes as the World Health ­Organisation warns the pandemic is entering a “new and dangerous phase” as people tire of lockdowns.

Queensland recorded no new cases on Sunday, while NSW recorded five despite 13,640 tests. All were recently returned international travellers in hotel quarantine. There was one case recorded in Perth.

West Australian Premier Mark McGowan also cited* Victoria as a reason why his state’s border closure could be extended. “Obviously what’s happened in Victoria has made us consider carefully what we do. I don’t want to get into the situation Victoria is in,” he said.

AUSTRALIA ‘ONE COMMONWEALTH’
But the Federal government is still urging states to reopen their borders to help the nation’s economic recovery and struggling tourism and hospitality* businesses.

Finance Minister Mathias Cormann said Australia was “one commonwealth”. “You don’t see that there is any issue in NSW as a result of localised* outbreaks in Victoria,” he said. “There is no border between Victoria and NSW today and there has never been.”

TIMELY REMINDER
Deputy Chief Medical Officer Nick Coatsworth said the rapid increases in cases in Victoria was a “timely* reminder” that the community was “not immune” to the virus.

“This is a timely reminder that, as all Australians, there are restrictions on how we live that we have really done well in pursuing*, but those will continue while we remain not immune to COVID-19, while there is not a vaccine or an effective treatment and while cases continue to increase around the world,” Dr Coatsworth said.

“Importantly as well, for those states where restrictions are lifting, that doesn’t imply* a lifting of our personal behaviour standards that we have become so used to.” 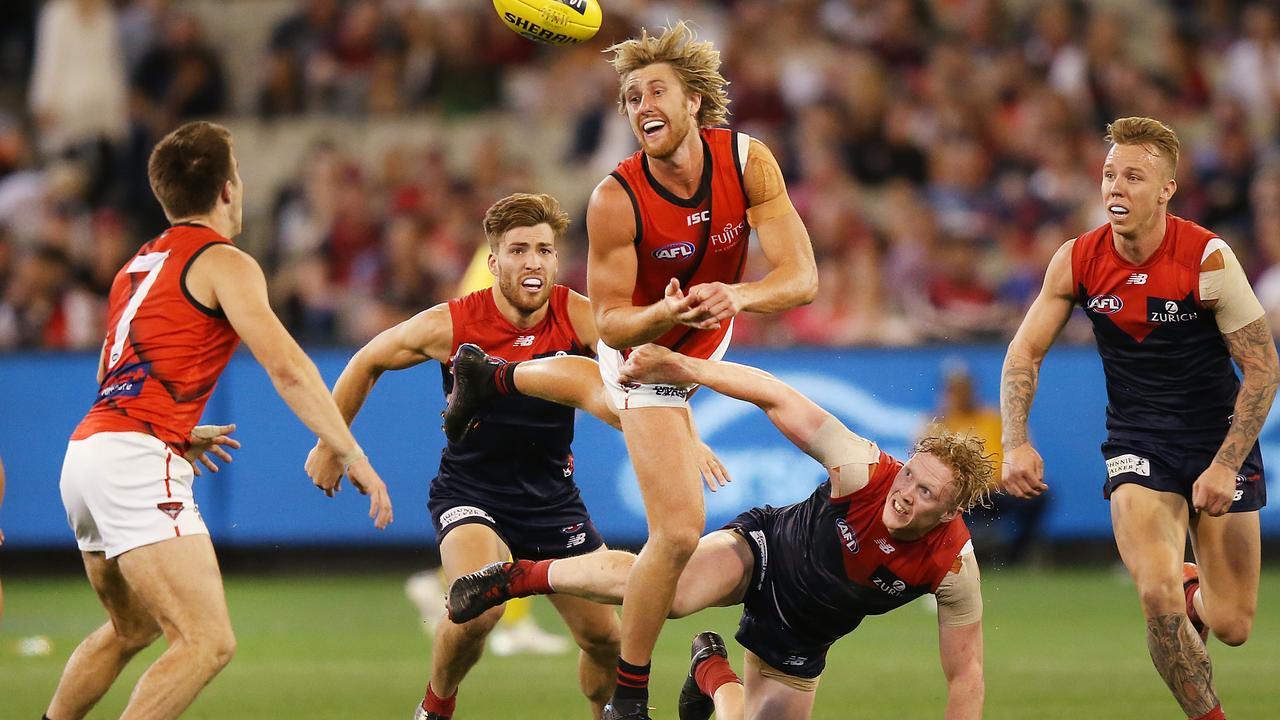 Dyson Heppell of the Bombers handballs to Zach Merrett of the Bombers in the round three AFL match between Melbourne and Essendon at the MCG on April 05, 2019. The game planned for Sunday between these teams was postponed. Picture: Getty Images

BOMBERS IN ISOLATION
The AFL has declared Essendon would play on Saturday night against Carlton as long as 22 players and four emergencies were available.

Bombers players and the club’s football department staff are in isolation until further tests this week after team member Conor McKenna’s positive test for COVID-19.

Eight players, including defenders Michael Hurley, Cale Hooker and Adam Saad, are considered most at risk of contracting the coronavirus as they took part in an indoor weights session with McKenna when he was asymptomatic* on Friday.

The league is now investigating playing more games in Darwin, Canberra and Tasmania, as well as using a hub* in Perth as concerns grow about the situation in Victoria. The season may now extend into November.

But the league believes it has measures in place to minimise the risk of the virus infecting a whole team and is confident the season is not under threat.

Footballers are tested twice a week for COVID-19, which includes the day before a full-contact training session and matches. More than 13,000 tests have been completed by the AFL.

On other days players train in small groups.

At some stage later this season, both Essendon and Melbourne will have to squeeze in an extra match to make up for Sunday’s postponed game.

Search for solutions to COVID-19 problems

CLASSROOM ACTIVITIES
1. Have your say
State/territory borders have become a big talking point throughout the COVID-19 pandemic with some states and territories closing borders and not allowing travel from nonresidents and/or imposing a 14-day quarantine period for anyone who enters their state. The Federal government has been putting pressure on these states to reopen the borders and allow people to travel freely within Australia. State and territory leaders and health officials have some concerns about this.

Draw up a two-columned chart and label the columns FOR and AGAINST.

In the corresponding column list reason why state governments should (FOR) open up their borders and why they shouldn’t (AGAINST).

After analysing both sides of the argument, write a paragraph outlining your opinion of whether the state/territory borders should be opened.

2. Extension
This article highlights the fact that we are not over the COVID-19 pandemic yet. The excellent work by health officials, governments and each and every one of us has so far contained the spread to small numbers in Australia. However, we cannot become relaxed yet. The latest spike in Victoria has given us a timely reminder to continue our efforts to beat this virus.

Help your family and friends to continue to follow the social distancing and hygiene protocols especially over the upcoming school holidays when they might otherwise become more relaxed. Write a song or jingle to remind everyone of the importance of social distancing, good hygiene and the restrictions they must follow in your locality. Try and make your song catchy (and maybe funny) so that people remember it and are not daunted by having these restrictions for longer. Although it is a serious concern, we want to keep people upbeat about having these inconveniences so they don’t forget them.

HAVE YOUR SAY: Should all or some state and territory borders be open?
No one-word answers. Use full sentences to explain your thinking. No comments will be published until approved by editors.