ONE of Australia’s best known sayings* can be traced all the way to the Victorian city of Shepparton.

Telling a furphy has long been Aussie slang for telling a fib or tall story.

The origin* of the saying can be tracked back to Furphy Engineering, famous for its water carts once used extensively* in Europe and the Middle East to carry water to the troops* during World War I.

Adam Furphy, managing director of J. Furphy & Sons, said the drivers of the carts were notorious* sources of information and gossip for the men as they moved from camp to camp.

“As could be expected, not all of their news was reliable leading the word ‘Furphy’ to become a synonym* for suspect information or rumour,” Mr Furphy said.

The business turned 150-years-old in 2014 with most of its staff having worked there for between 20 and 30 years.

Mr Furphy is the fifth generation Furphy to lead the family business, which is still based in Shepparton. 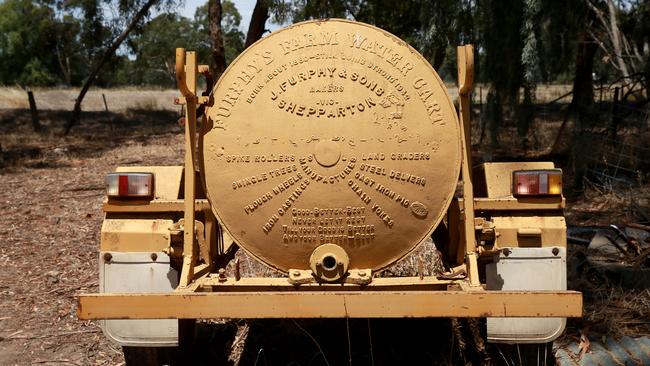 “Our family has been here a long, long time and we’ve benefited, I think, really heavily from the kind of positives that Shepparton brings,” Mr Furphy said.

“Obviously we’ve got the beautiful sunshine, water and history of growing things but we’ve just got a bunch of people who have stuck their head down and got into it.

“I see some great times ahead for Shepparton.” Buckley’s chance: no chance. This refers to the convict William Buckley who escaped into the Victoria bush in 1803. People thought he has no chance but he survived for 30 years, living with indigenous people.

Come a gutser: to have an accident or fail.

Fair dinkum: genuine and true. It comes from a now-extinct part of the English language in England, where dinkum meant hard and fair work.

Mad as a cut snake: angry, crazy or eccentric.

London to a brick: to be absolutely sure.

Fit as a mallee bull: Very strong and healthy. A mallee bull lives in dry, harsh mallee country and any animal that survives would have to be tough and fit.

origin: where something comes from

notorious: famous for a specific thing

synonym: a word that means the same as another

Answer these questions about the article:

1. What are some other words that mean the same as ‘a Furphy’?

2. Explain how ‘telling a Furphy’ became an expression.

3. What are two things that we know about the Furphy family business?

4. Do you think that the troops would have been upset about the water cart drivers “telling Furphys”? Why or why not?

5. What is Mr Furphy’s opinion about Shepparton?

Can you think of a time when you might have stretched the truth a little and told a Furphy? Come clean by writing down what really happened and what you said happened!

There are lots of other unusual sayings that we use, often without quite knowing how or where they originated.

Choose one of these sayings and then answer the four questions about it.

— To let the cat out of the bag

— To give someone the cold shoulder

— To let your hair down

— To bite the bullet

— To butter someone up

1. As far as you know, what does the saying mean?

2. How do you think this saying might have started?

3. What does the saying actually mean?

4. How did the saying start?

Write a paragraph that includes the saying you chose above, showing that you know how to use it correctly.

Play this game with a partner. Write down three definitions for an unusual word along the lines of “furphy”

The aim is that one definition will be correct, whilst the other two definitions will be a furphy! The challenge is to create realistic definitions that will trick your partner into believing that an incorrect definition is correct.

Use a dictionary to get the correct definition! (You might also need to go online to investigate)

Some examples of words you could use are: