The 12 Olympians and the story of Zeus, the King of all the Gods A statue of the Zeus, who was the King of the Greek Gods. .

At the centre of Greek Mythology is the group of powerful Gods who were said to live on Mt Olympus, the highest mountain in Greece.

Known as the Olympians, they gained control in a 10-year-long war of Gods, in which Zeus led his siblings to victory over the previous generation of ruling Gods, the Titans*.

From their perch, they ruled every aspect of human life. Olympian Gods and Goddesses looked like men and women (though they could change themselves into animals and other things) and were — as many myths described — vulnerable to human feelings, weaknesses and passions.

When things had to be decided about wars, punishments or everyday life, this council of 12 met on Mt Olympus to discuss them.

The Olympians all kept a home on Mt Olympus but Poseidon preferred his palace under the sea.

2. Hera: the Queen of the Gods and Goddess of women and marriage

3. Aphrodite: Goddess of beauty and love

4. Apollo: God of prophecy, music and poetry and knowledge

7. Athena: Goddess of wisdom and defence

8. Demeter: Goddess of agriculture and grain

Other Gods and Goddesses sometimes included in the roster of Olympians are:

Hades: God of the underworld

Hestia: Goddess of home and family 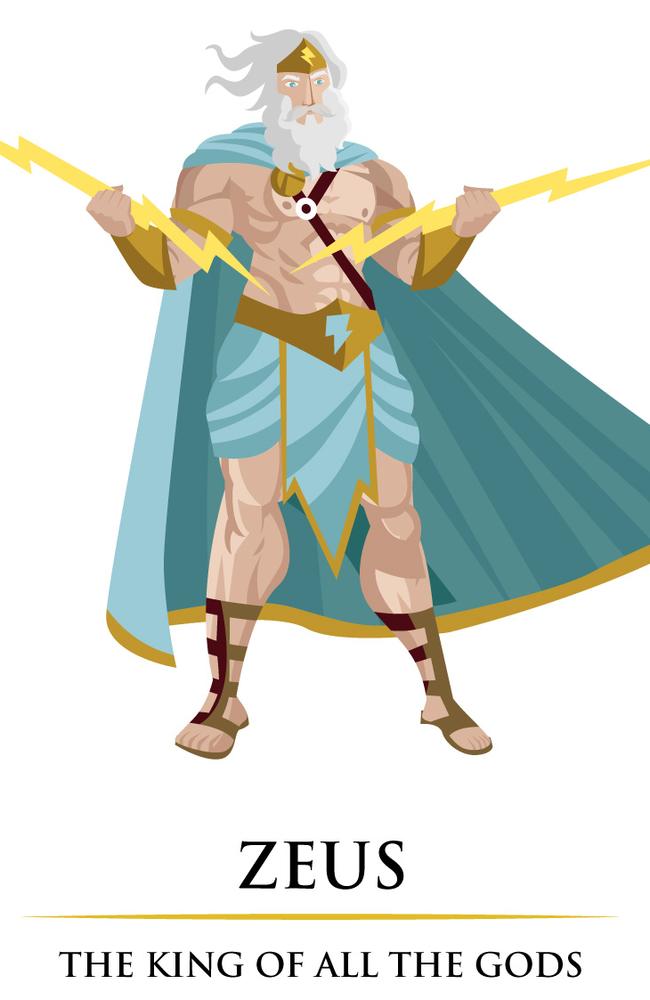 Artwork of Zeus the Greek god

ZEUS: KING OF THE GODS
Often referred to as the “Father of Gods and men”, Zeus was a Sky God who controlled lightning, thunder and storms.

Zeus was the king of Mount Olympus, the home of Greek Gods, where he ruled the world and imposed his will on to Gods and humans.

Zeus was thought of as wise and fair, but his decisions were hard to predict at times and he could be easily angered. When he was in a bad mood, he was said to throw lightning bolts and cause violent storms that caused destruction* on Earth.

Zeus fell in love very easily and had many relationships, but he would severely punish anybody who attempted to fall in love with his wife Hera.

He is often described as a big, strong man with long, curly, hair. He was usually drawn with a beard and carried his trusty thunderbolt at all times.

Zeus was lucky to survive his birth.

His father, Cronus, King of the Titans, upon learning that one of his children was destined* to take his throne, swallowed his children as soon as they were born. But Rhea, his wife, saved the infant Zeus by substituting a stone wrapped in baby clothes for Cronus to swallow. She hid Zeus in a cave on the island of Crete. After Zeus grew to manhood he led a battle against the Titans and succeeded in forcing Cronus off the throne.

NOTE: For more information on the other Olympian Gods, please see the story Greek Gods of Mt Olympus.

HAVE YOUR SAY: If you could choose to be one of the 12 Olympians, who would you choose to be?
No one-word answers. Use full sentences to explain your thinking. No comments will show until approved by editors.