Narcissus was so in love with his own image and became distressed that he could not possess it.

There are many famous stories in Greek Mythology. Some describe villains who committed crimes of pure evil while others are stories that have a moral to them that humans continue
to learn from today. Pandora’s curiosity made her famous.

PANDORA
Pandora was the first mortal* woman in Greek Mythology. But this is not what made her famous — it was her curiosity and how it brought evil to mankind.

Pandora’s story starts with a trickster named Prometheus, who stole fire from the Gods and gave it to the humans. This angered the King of the Gods, Zeus.

He decided to punish humans for receiving the fire by instructing the blacksmith God Hephaistos to create the first woman, Pandora, from clay and gift her with all the negative parts of life to fall on the human race — tiresome work, illness, war, plagues and death.

One of the other gifts the Gods gave Pandora was a jar full of all the evils and diseases that existed in the world.

With the jar in hand, Pandora was given in marriage to Epimetheus, Prometheus’ brother, who accepted the gift from the Gods despite his brother’s warnings to never take a gift from Zeus.

One day — out of curiosity — Pandora lifted the lid of the jar and instantly released all the evils and diseases into the world. Shocked by what had happened, she quickly tried to put the lid back, managing to merely trap “Hope” inside it.

And that is why we say hope is the last thing that dies in people. An artwork of Narcissus staring at his own reflection.

NARCISSUS
Narcissus was a hunter in Greek Mythology. He was the son of the River God Cephissus and the nymph Liriope. He was an extremely handsome young man and many fell in love with him.

But he didn’t respect those in love with him. He used to sneer at them and felt they were not special enough to be his lover.

One day while Narcissus was hunting in the woods, the nymph* Echo spotted him and immediately fell for him.

When Narcissus sensed that someone was following him, Echo revealed herself and tried to hug him. But he pushed her away.

In despair, Echo roamed around the woods for the rest of her life and wilted away until all that remained of her was an echo sound.

Nemesis, the Goddess of retribution and revenge, learned what had happened and decided to punish Narcissus.

She led him to a pool where Narcissus saw his own reflection in the water and he fell in love with it. When he realised he could not have his reflection, he fell into a deep depression and killed himself. Arachne was a weaver who was turned into a spider.

ARACHNE
Arachne was a weaver* who challenged the Goddess Athena and was transformed into a spider. There are three versions of the myth.

One version has it that she was a shepherd’s daughter who was particularly skilled at weaving. Boasting about her skill, she angered Athena, who appeared and challenged her to a contest. Athena wove* four scenes in which the Gods punished those humans that considered themselves equal to Gods while Arachne wove scenes in which Gods abused humans. Arachne’s work was clearly better than Athena’s, which enraged the Goddess even more. Athena threw a potion on to Arachne, transforming her into a spider and condemning* her to weave forever more.

In a different version, at the challenge, Athena wove a scene from the well-known contest between herself and Poseidon over who would become the patron saint of Athens. Arachne wove a picture of Zeus’ advances to various human women. Athena realised how skilled Arachne was, but wanted to teach her to be more humble and respect the Gods. Touching Arachne’s forehead, the woman was filled with shame and killed herself. Athena brought her back to life and turned her into a spider, in order to let her weave for eternity*.

In the final version of the myth, Zeus was the judge in the contest between Arachne and Athena, and whoever lost would not be allowed to touch a spindle or the loom* again. Athena won in this version, and Arachne was devastated that she could no longer weave. Out of pity, Athena transformed her into a spider, so she could continue weaving without having to break her oath. 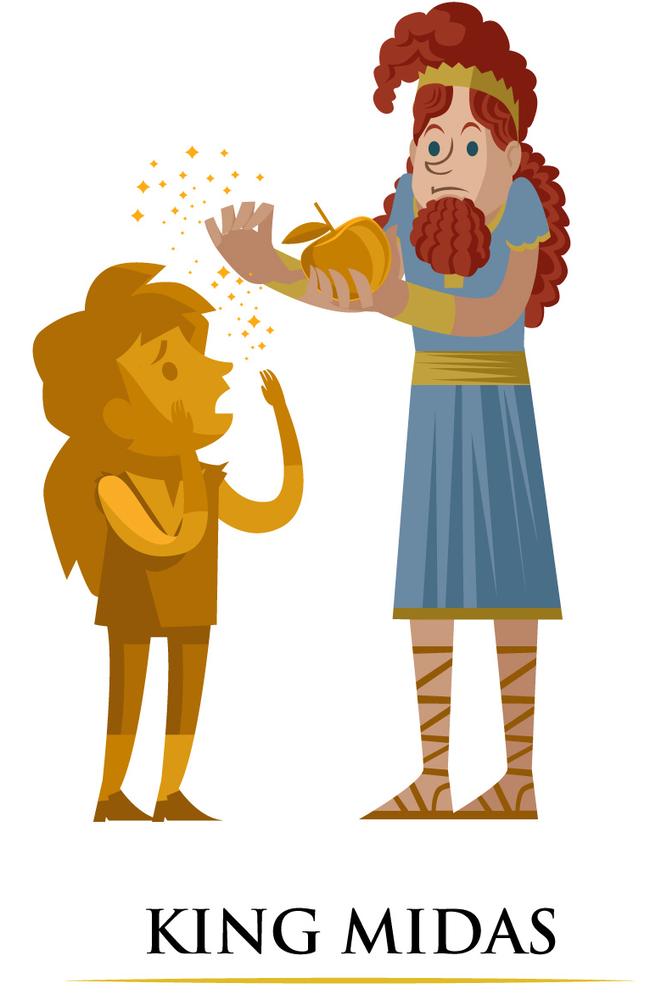 King Midas’s story starts when he helped a friend of the God of Wine.

KING MIDAS
Midas was the adopted son of King Gordias and Cybele and grew up to King of Phrygia.

His story starts after he helped a penniless Silenus, who was a good friend of the God of Wine, Dionysus, and looked after him in his palace for 10 days feeding and entertaining him.

On the 11th day, King Midas returned Silenus to Dionysus, who was so grateful he granted King Midas one wish.

The King asked for the power to turn everything he touched into gold.

With his wish granted, Midas went away and started trying his new powers. He first turned some twigs into gold, then stones and corn and apples.

But once he got home, he realised his wish had become a curse. He couldn’t eat or drink because all his food and drinks turned to gold the minute he touched them.

He had no choice but to return to Dionysus and ask for the wish to be reversed.

The memory of this story lives on with the saying: “Having the Midas touch”, which means you can make riches out of anything you touch or are involved in. 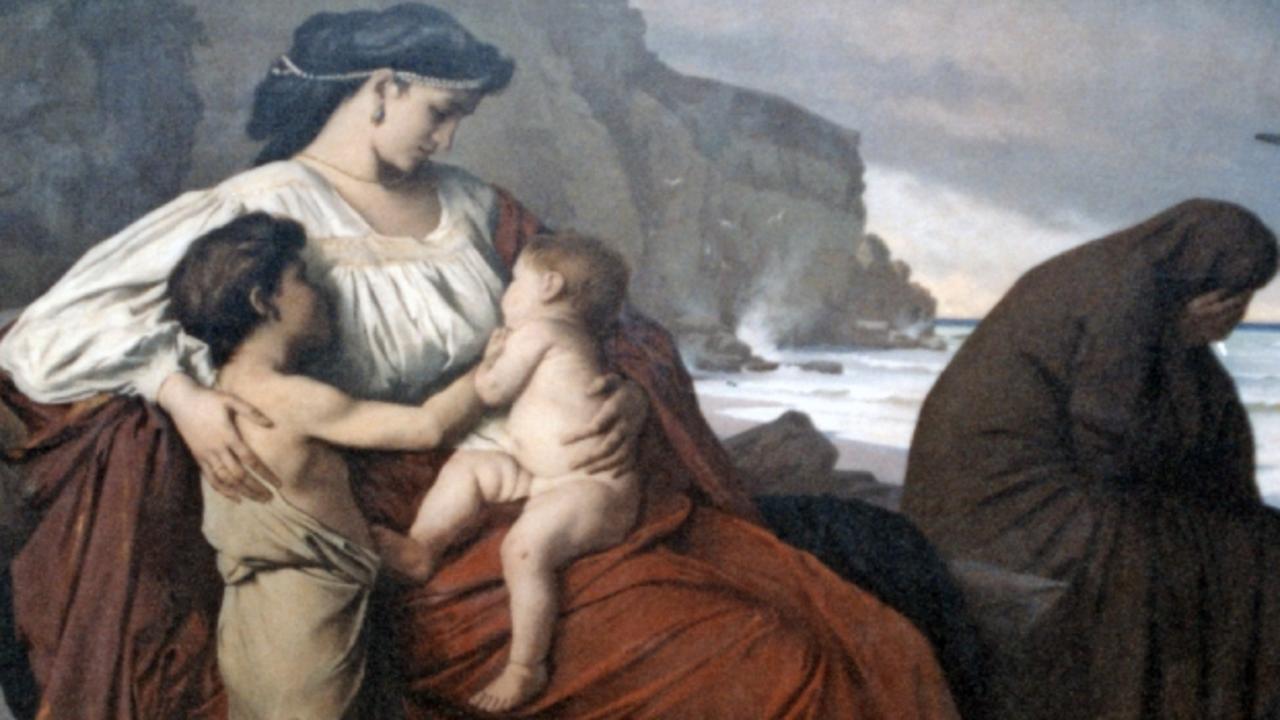 Medea fell in love with Jason and told him she would help him in his quest.

MEDEA
Medea was the daughter of King Aeetes of Colchis and wife of the mythical hero Jason.

Medea met her husband when Jason and the Argonauts arrived in Colchis to claim the famous Golden Fleece from the king. She fell in love with him and told him she would help him in his quest, under the condition that he would take her with him.

After returning the Golden Fleece to the King, Jason and Medea went to live on the island of Corinth and had several children.

Although the myth has different endings, the best known is that Jason abandoned his wife to marry the king’s daughter so they could stay on the island.

Medea became enraged and sent a dress and a coronet* covered in poison, causing the deaths of both Glauce and her father. She then killed all her children, and fled to Athens on a golden chariot sent by her grandfather, the God Helios.

Afterwards, she went to Thebes where she healed Heracles from a curse that Hera had inflicted on him.

In modern times, this story is referred to with medical experts using the term the “Medea Complex” to describe a negative relationship between a mother and child.

HAVE YOUR SAY: Tell us what you believe the moral of the Pandora’s Box story is.
No one-word answers. Use full sentences to explain your thinking. No comments will show until approved by editors.