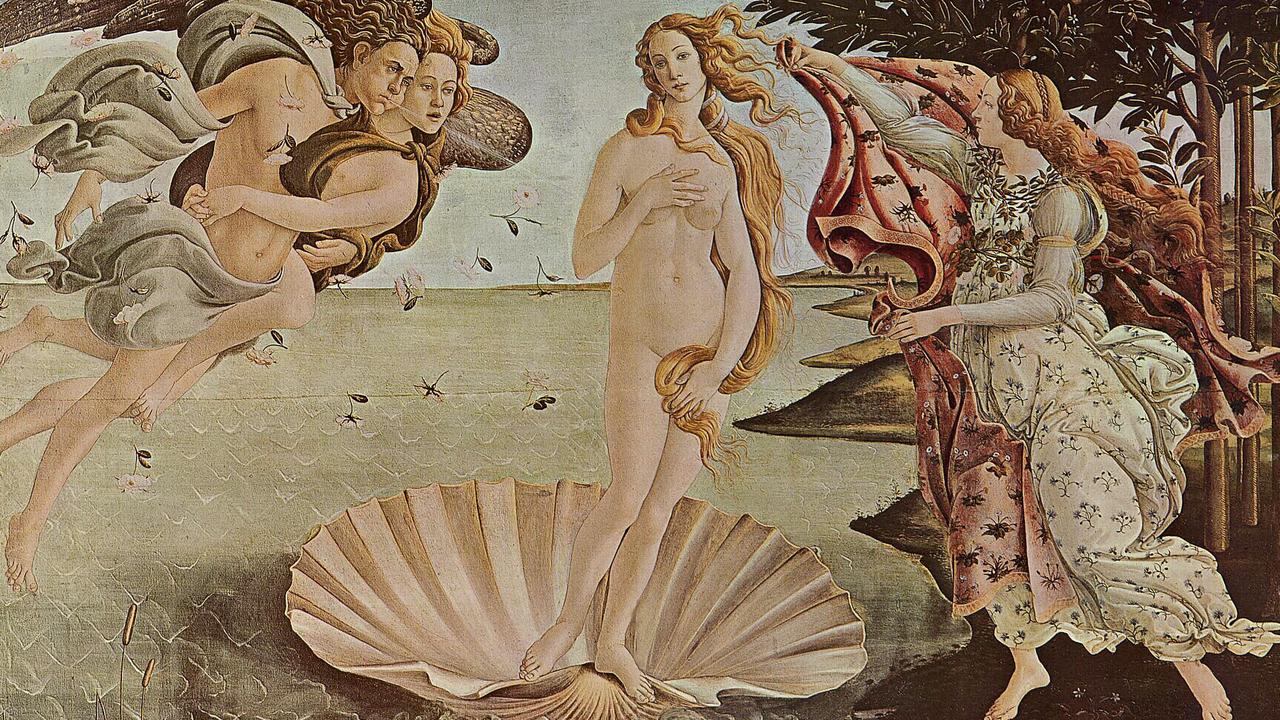 Artwork of Aphrodite, the Goddess of Love. The painting is called Botticelli’s Birth Of Venus and refers to her Roman name.

There were five Goddesses among the Olympians who lived on Mt Olympus.

Here we learn what motivated them and how they helped ruled the ancient world. Aphrodite was the most beautiful of all the Goddesses.

Her role was to rule over the love between the Gods, between humans and between Gods and humans.

There are two stories about how she was born. The first, according to Hesiod’s poem Theogony, was that she was born from the foam in the waters of Paphos, on the island of Cyprus.

However, according to Homer, in The Iliad, Aphrodite may instead be the daughter of Zeus and Dione. With many Greek Myths handed down verbally*, it is hard to know which is right.

Her beauty was so unique that it was feared many Gods would fight each other for her hand in marriage and cause a war. To avoid this, Zeus married Aphrodite to the God Hephaistos, who wasn’t seen as a threat because of his ugly appearance and deformity.

When the Trojan prince Paris was asked to judge which of three Olympian Goddesses was the most beautiful, he chose Aphrodite over Hera and Athena, despite the latter* two trying to bribe him with power and victory in battle.

Aphrodite won because she offered Paris the love of the most beautiful woman in the world.

This was Helen of Sparta, who became infamous as Helen of Troy when Paris eloped* with her, causing the Trojan War.

During the war, Hera and Athena were enemies of Troy while Aphrodite was loyal to Paris and the Trojans.

One of Aphrodite’s sacred animals is the swan and she used a swan-drawn car to glide easily through the air.

Aphrodite’s image is often used in artwork and she is famously noted as the model for the well-known sculpture Venus de Milo (Venus was her name in Roman mythology).

Other artwork often show her surrounded by flowers and vegetation, indicating her fertility. 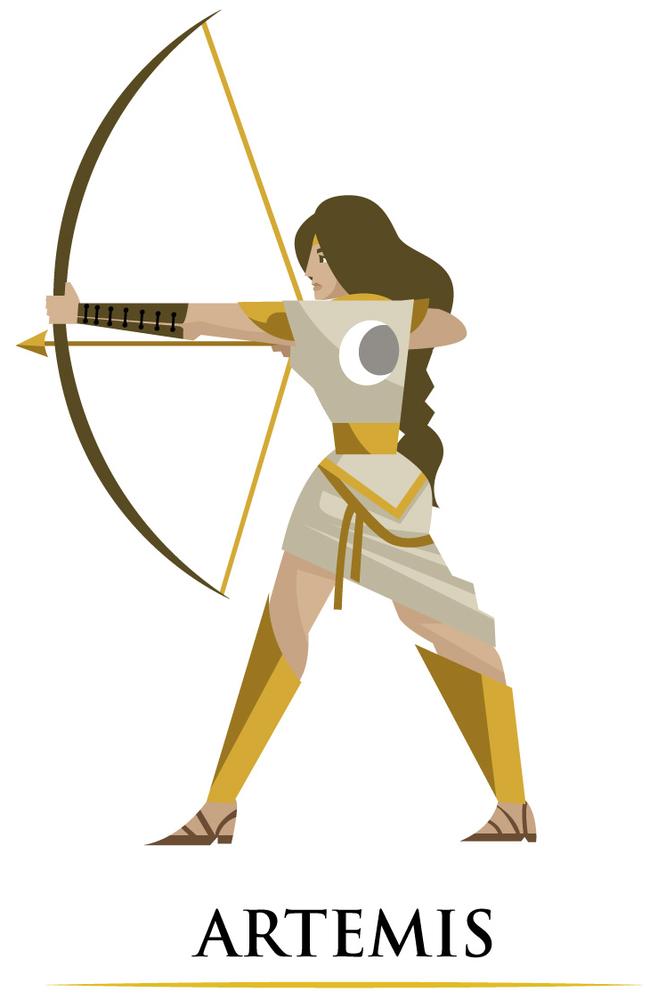 Artemis was the Goddess of the hunt and known for ruling over wild animals.

2. ARTEMIS: Goddess of the Hunt
Artemis is one of the most respected of the Gods and Goddesses from Mt Olympus.

She was the Goddess of the hunt but also known for ruling over wild animals, wilderness and childbirth and was a protector of young children.

She was important to women by helping them in childbirth and she was capable of healing women of disease.

Artemis spent most of her time roaming the forests with her nymphs*.

In literature and art, she was depicted as a huntress carrying a bow and arrows made by the God Hephaistos and the one-eyed giant Cyclops. It was said she could bring sudden death with her arrows.

It was her hunting companion, Orion, that won her heart. It is believed Orion was accidentally killed either by Artemis herself or by Gaia, the ancient Goddess of the Earth.

Artemis had a mean side. She would get very angry whenever her wishes were not followed, especially if anyone hurt the animals that were sacred* to her. She punished Agamemnon, for example, when he killed a stag in her sacred grove.

The Temple of Artemis was built at Ephesus (now in Turkey) in honour of Artemis. It was very grand and twice the size of the Parthenon in Athens. It came to be regarded as one of the “Seven Wonders of the Ancient World”. It was destroyed by fire but rebuilt and then later destroyed by a Christian mob. All that remains today are the foundations and just one column. 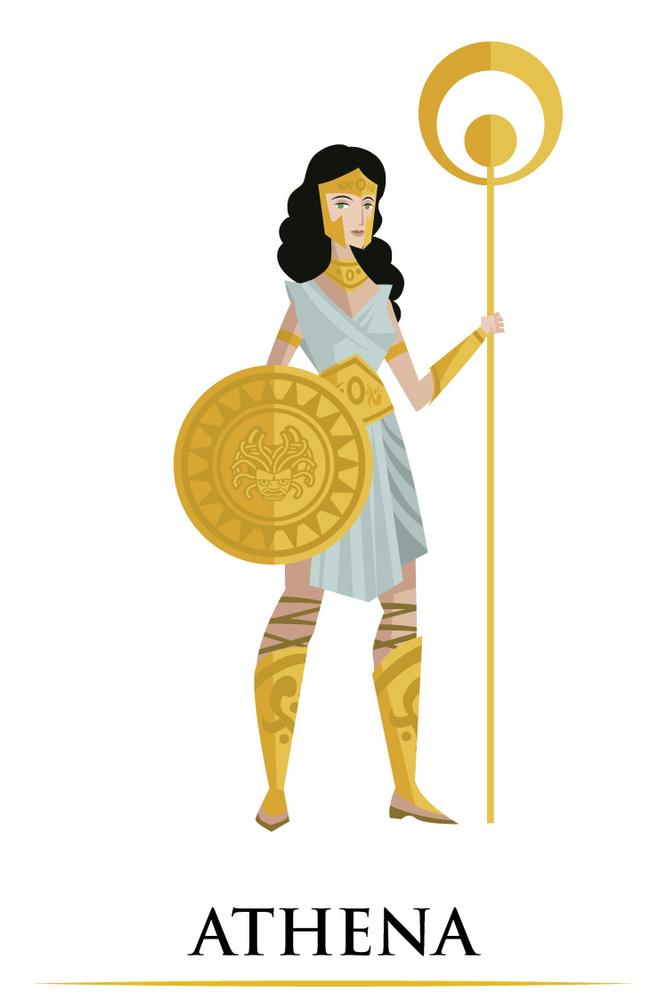 3. ATHENA: Goddess of wisdom and war, crafts and arts
When Athena was born in a most unusual way, she was born ready for war.

She was said to have been created from Zeus after he experienced an enormous headache and she sprang fully grown and in armour from his forehead. Greek Mythology states she has no mother.

She was Zeus’s favourite child and he trusted her to use his goatskin shield and his thunderbolt.

Athena is often remembered as a friend to many heroes and she helped Perseus, Jason, Cadmus, Odysseus and Heracles in their quests.

According to Homer’s The Iliad, Athena was a fierce and ruthless* warrior but also angry and unforgiving.

She once turned the weaver Arachne into a spider after the mortal woman insulted Athena and the Olympian Gods.

Athena gave birth to Ericthonius, son of Hephaistos. He was half man and half serpent. One famous myth describes Athena putting the infant in a chest and giving it to others to watch over, forbidding them to open it. When they did, she drove them mad as punishment.

Athena was also a patron* of the arts and crafts, especially when it came to spinning and weaving. She invented the flute but never played it.

One famous Greek story involves both Athena and Poseidon, the God of the Sea, wanting to be named patron of Athens. To prove she was up to the job, Athena made an olive tree spring up on the fortress of Athens, the Acropolis.

Poseidon tried to beat her by striking the ground with his trident (a three-pronged fork) which caused a spring of water to gush out. But as he was God of the Sea, the water was salty and Athena’s gift to the Athenians was considered to be more useful. She was then named patron Goddess of Athens.

Her most important festival was the Panathenaea, which was celebrated annually at Athens. 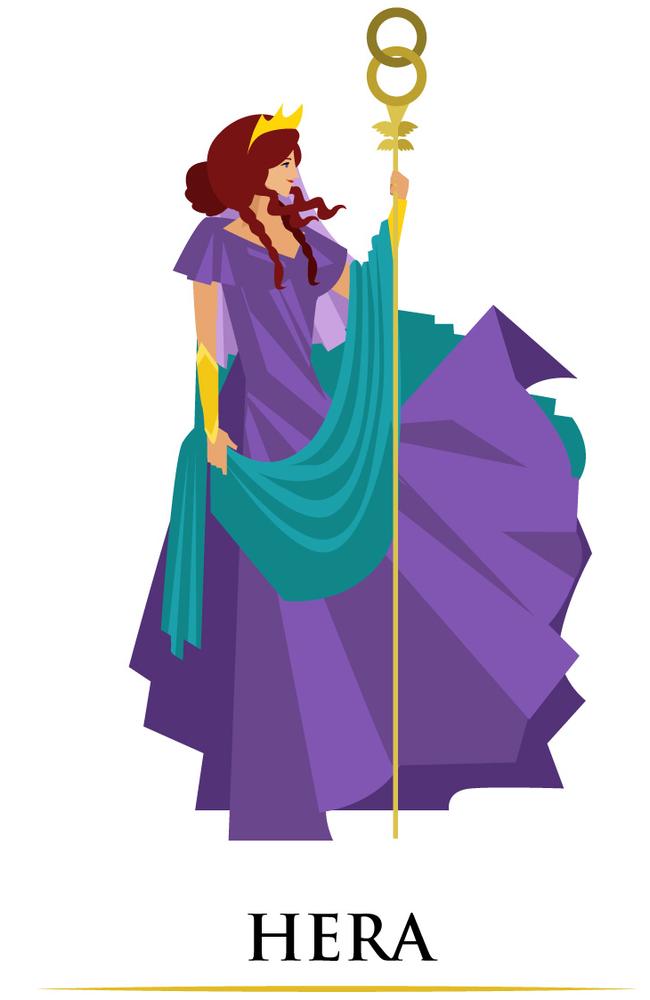 Hera, Queen of the Gods and Goddesses

She was the protector of women and ruled over marriages and births.

She is often shown in artworks as being very majestic* and crowned with the polos — a high cylindrical crown worn by many of the great Goddesses.

Even before her marriage to Zeus, she ruled over the heavens and the Earth. This is one reason why she was also referred to as “The Queen of Heaven”.

Though she may have been physically attractive she also had a passion for taking revenge on those who did her wrong, which was an unattractive characteristic.

Hera was a jealous wife, and she fought with Zeus frequently over his love for other women and the children they had together.

Hera turned the nymph Callisto into a bear because Zeus fell in love with her.

Hera also hated the great hero Heracles since he was the son of her husband Zeus and a mortal woman. When he was still an infant, she sent snakes to attack him in his crib.

Zeus was afraid of her.

Hera was worshipped* in all parts of Greece and temples were built for her at Argos and Salmos. 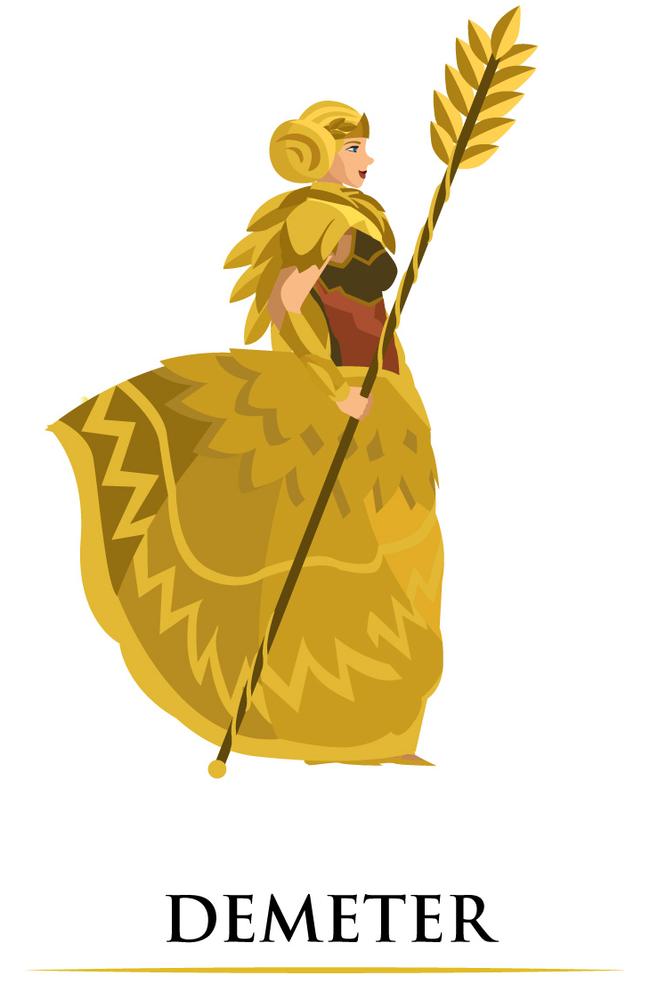 Demeter made sure that everyone had a great harvest.

5. DEMETER: Goddess of agriculture, harvest and fertility
Demeter was the Goddess who blessed the Earth and made sure that everyone had a great harvest*.

In ancient art, she was pictured wearing a wreath made of ears of corn and Greek Mythology records that the harvest was either good or bad depending on her moods.

It is also believed the four seasons were born after she suffered a terrible heartache.

Her daughter Persephone was abducted by the God of the Underworld, Hades, who intended to make her his queen and Demeter endlessly searched for her daughter while consumed with loss and grief.

In her despair, the seasons halted and living things stopped growing and died. The world suffered from famine*.

Zeus was forced to send the Gods to Demeter one by one to try and bring her out of her sadness. Demeter and Persephone were finally reunited on the order of Zeus.

CLASSROOM ACTIVITIES
Refer to the accompanying Greek Myths and Legends classroom workbook with 25 activities. Can be purchased for $5 including GST at https://kidsnews.myshopify.com/products/greek-myths-and-legends

HAVE YOUR SAY: Which of the Greek Goddesses do you think had the best qualities? Why?
No one-word answers. Use full sentences to explain your thinking. No comments will show until approved by editors.