Ancient lands were filled with monsters, animals and beautiful Sirens A cyclops in a scene from film The Chronicles of Narnia: The Lion, The Witch and the Wardrobe.

The wild tales of Greek Mythology suggest the Ancient Greeks were surrounded by monsters, animals and strange hybrid creatures that joined humans and animals together.

Some were friendly and wise, some were vicious and famous for fighting heroes on their quests, while others simply put fear into both the Gods and mortals because of their ferocious and deadly behaviours.

Here are some of the better known of these: 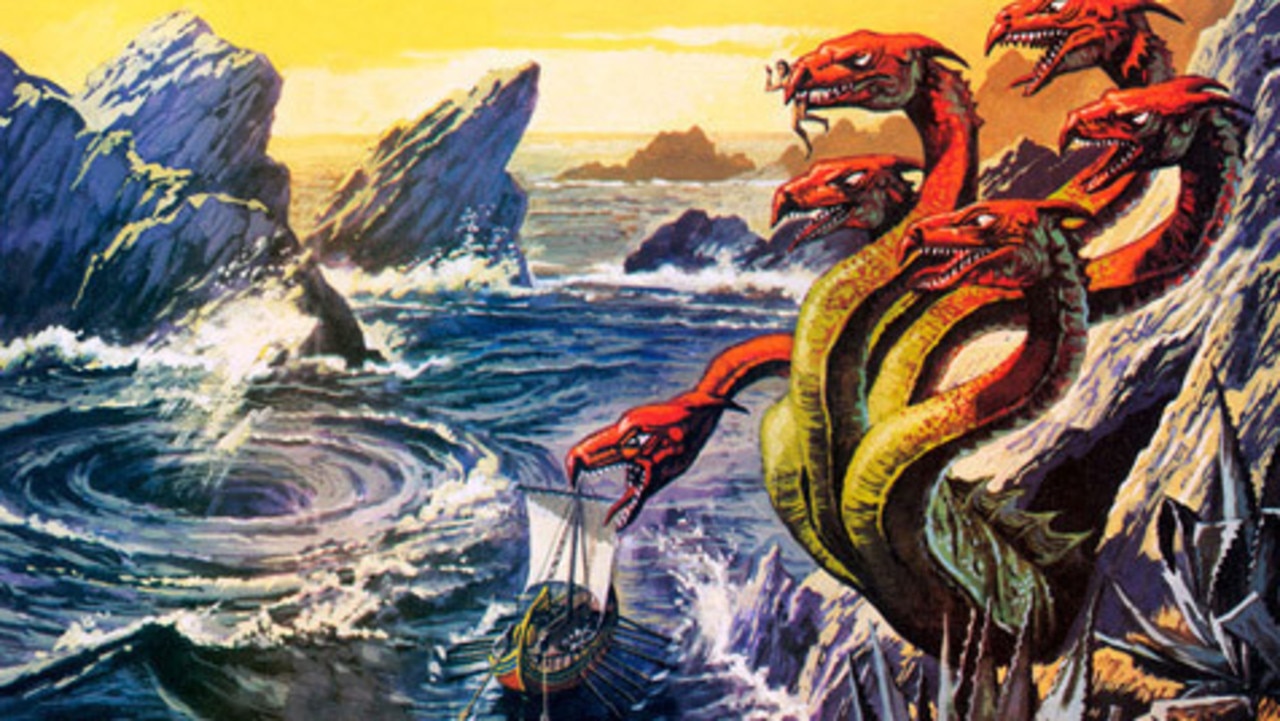 Scylla and Charybdis try to send a boatload of sailors to their deaths.

SCYLLA AND CHARYBDIS
Scylla and Charybdis are two of the best known monsters in Greek Mythology and two of the scariest.

Both were extremely dangerous for sailors on the high seas and they ruled a stretch of narrow waters believed to be the Straits of Messina, that many ships had to navigate through.

Scylla was a six-headed monster which, when ships passed, tried to swallow one sailor for each of its heads.

Charybdis created an enormous whirlpool that threatened to swallow the entire ship.

These two monsters are well-known from the story of the hero Odysseus in Homer’s book Odyssey, Book XII.

Scylla was a supernatural female creature, with 12 feet and six heads on long, snaky necks, each head having a triple row of shark-like teeth, while her upper legs were surrounded by the heads of vicious dogs. From her home in a cave she ate whatever came within reach, including six of Odysseus’s companions.

The name Scylla means puppy and it is believed this monster could only make puppy noises.

She would wait for fish, dolphins and men to pass her way and then rush out one of her heads to drag the victim back into her cave to be eaten.

Charybdis, who lived under a fig tree on a nearby shore to the narrow waters, swallowed and spat out the waters three times a day to create a deadly whirlpool that would trap ships.

When Greek hero Odysseus became shipwrecked, he barely escaped her clutches by clinging to a tree until the improvised raft that she swallowed floated back to the surface after many hours. PEGASUS, the winged horse
Pegasus was an immortal* winged horse, one of the two children of Poseidon and Medusa.

The flying horse is said to have been born from his pregnant mother’s neck after she was killed.

He was then raised by the Muses at Mount Helicon, where he was taken by the Goddess Athena. In all of his excitement for being given to those women, Pegasus began striking the side of the mountain with his hoofs and his marks caused springs of water to turn into flowing fountains of inspiration.

Those springs became sacred to the Muses who loved and respected their “flying horse”.

Pegasus eventually ended up on Mt Olympus and worked for Zeus pulling his chariot.

After years of service, Zeus awarded Pegasus with a constellation*, which carries his name to this day.

Pegasus lived on Mt Olympus until his death. Ever since then, he has been known as an inspiration for artists of all kinds. The Centaur — half man and half horse.

CENTAUR, the horse-man
Centaurs are half-human, half-horse creatures. They have the body of a horse but the torso, head and arms of a man. They were considered to be the children of Ixion, king of the Lapiths, and Nephele, a cloud made in the image of the Goddess Hera.

According to a different myth, however, they were all born from the relationship between a single Centaurus with the Magnesian mares.

One of the best known and wisest centaurs was Chiron.

Although most centaurs were described as wild, Chiron was different. He was modest and civilised and famous for his medicinal skills and teaching abilities.

He lived on Mt Pelion in Thessaly and taught several Greek mythical characters such as Achilles.

He was immortal but he was accidentally wounded by Heracles with an arrow treated with the blood of the monster Hydra, causing him terrible pain. So, when Heracles asked his father to free Prometheus and Zeus demanded that someone must be sacrificed, Chiron volunteered and died, both to free Prometheus and himself from the pain. 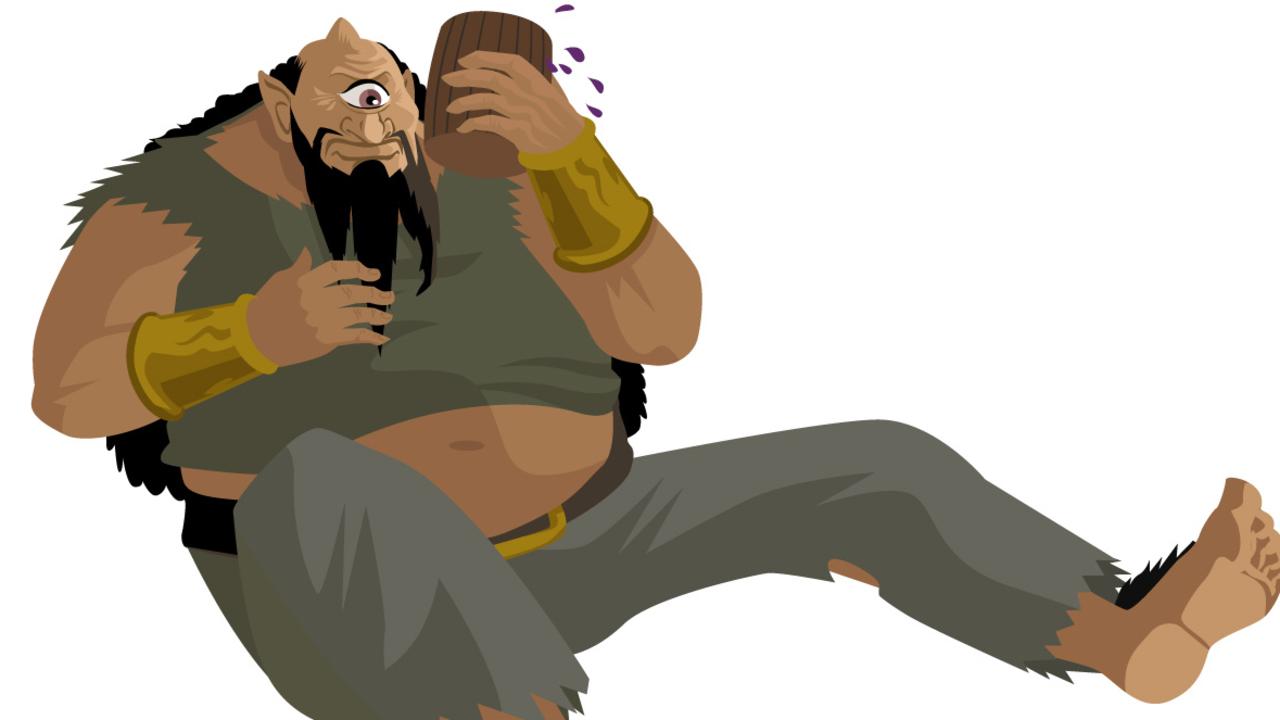 Cyclopes were huge creatures with one eye.

CYCLOPES, the one-eyed giants
Cyclopes were huge creatures with enormous strength and one eye in the middle of their foreheads.

Originally, there were three of them — Arges, Steropes and Brontes. They were all very good blacksmiths.

One day they were taken prisoner by Cronus, but later released by Cronus’s son Zeus.

They were so grateful for their freedom, they created Zeus’s famous thunderbolt as a symbol of thanks.

Greek Mythology also mentions a different kind of Cyclopes. This race was not so smart and the violent one-eyed creatures lived in caves with sheep they had gathered on the island of Sicily.

The word “cyclops” can be translated as “round-eyed,” but many authors of Greek Mythology feel that it is derived from a much older word which originally meant “sheep thief”.

Both describe the Cyclopes well. Gorgons were scary monsters with ugly faces and snakes for hair.

THE GORGONS
The Gorgons were three famous and scary monsters with ugly faces and snakes for hair.

They were the daughters of Echidna and Typhon, who were considered the mother and father of all monsters.

The daughters’ names were Stheno, Euryale and, the most famous of them all, Medusa.

Medusa was once a beautiful young woman, the only human of the three sisters. Her beauty caught the eye of the sea god Poseidon, who tried to seduce her in the sacred temple of Athena. Furious that this event took place in her temple, Athena transformed Medusa into a monster with the deadly capacity to turn whoever looked upon her face to stone.

Medusa was eventually killed by the Greek hero Perseus after King Seriphus ordered him to bring him Medusa’s head. Sirens from Greek Mythology that used to lure sailors to their deaths.

THE SIRENS
The Sirens were mythical creatures that sang so beautifully they were able to attract the attention of any sailors passing by and lure them to their deaths.

Each Siren combined the appearance of a woman and a bird, but the exact appearance would change depending on the artist drawing the images.

Some drew Sirens that had bodies of birds with the heads of women, while others made them look like women with the legs of birds.

In later years, Sirens were drawn more like mermaids with long tails.

Whatever their form, the daughters of the River God Achelous and a muse, they were destined to die if anyone should survive their singing.

The most famous story about the Sirens comes in Homer’s The Odyssey, as Greek hero Odysseus and his men sailed by them.

Odysseus had been warned about the dangers of the Sirens, and he prepared his men by having them put beeswax in their ears to block out the song. They then tied Odysseus to the mast of the boat, as he wanted to hear what the Sirens sang about. The beautiful song caused Odysseus to order that his men untie him, but instead they tightened the ropes and waited until they were clear of the Sirens to release him.

Once Odysseus and his sailors had passed the Sirens unharmed, the creatures threw themselves into the sea and were drowned.

Part Six: Villians and tales with a twist

HAVE YOUR SAY: Which of these monsters and other creatures would you like to make a movie about?
No one-word answers. Use full sentences to explain your thinking. No comments will show until approved by editors.