It took nine years and about $20 billion to build but only a few people will be able to drive on it.

Chinese President Xi Jinping and Hong Kong’s chief executive Carrie Lam opened the bridge on Tuesday. Hong Kong is an island that has been a part of China since 1997. Chinese President Xi Jinping clapping at the launch of the bridge. Film of fireworks was shown on the screen behind him. Picture: AP

The 55km crossing includes a snaking* road bridge and underwater tunnel, which ships can sail over. Cameras on the bridge check if drivers yawn more than three times in 20 seconds. Heart rate and blood pressure of drivers is also monitored.

Building began in 2009 and the excitement of its completion has been clouded* by delays, budget overspends, corruption* and the deaths of construction workers.

The launch was only announced last week by mainland Chinese government officials. Hong Kong officials and transport companies have complained they have been left out of launch discussions.

It is the second major link tying Hong Kong to mainland China to launch in weeks, after the opening of a high-speed rail link last month.

Supporters of the project hail* it as an engineering marvel* that will benefit business and cut travel time.

Others see it as expensive and a failure and a way for mainland China to have more control over Hong Kong, which is called an autonomous* territory. This means that Hong Kong residents have rights and laws different to residents of mainland China.

Hong Kong politician Eddie Chu told The Guardian newspaper the bridge was “basically redundant*” after officials claimed the bridge would see about 25 per cent less traffic by 2030 because of another competing bridge.

Online commenters in Hong Kong complained about the bridge’s restricted access ahead of the launch.

“Such a huge investment using the Hong Kong taxpayer’s money … yet basically it is not open to us at all,” said one comment on the South China Morning Post news website. 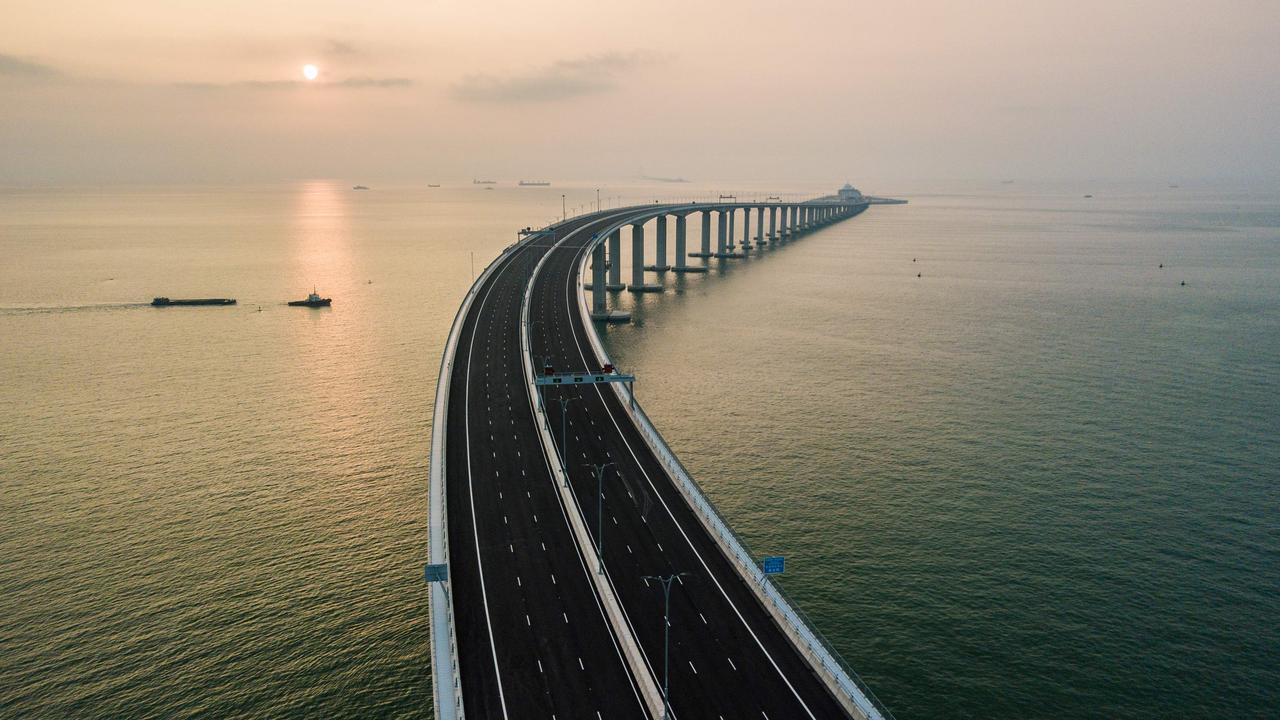 This is an aerial view of part of the bridge. It is difficult to photograph the whole bridge together because it is so far across. Picture: AFP

The bridge is mainland territory. Hong Kong drivers must obey the laws of the mainland while on the bridge. They will need a special permit to cross, available to only a few, including those who pay lots of taxes to the Chinese government, donate a lot of money to mainland China territories or have senior government jobs on the mainland. There won’t be public transport across the bridge, only private buses. People who cross the bridge will go through immigration and show their passport in Hong Kong, as we do when we leave and return to Australia. Picture: AFP

Towers above the bridge have been designed to look like dolphins, in honour of the threatened Chinese white dolphin that lives in the Pearl River estuary*, which the bridge crosses. The bridge’s curves are meant to resemble a snake, according to the designer.

Conservationists claim building the bridge has led to falling numbers of the dolphins.

corruption: dishonesty, such as taking money from someone to make decisions they agree with

autonomous: works separately and makes its own decisions

redundant: not useful any more

estuary: where the mouth of the river meets the sea

1. Why can’t you drive between Hong Kong and China without a bridge?

3. Another link opened recently. What sort of a bridge is that?

4. Will everyone be able to travel across the bridge? Who can and who can’t?

5. Which side of the road will everyone drive on when on the bridge?

Do you think the bridge should have been built? List all of the information in the story that supports your opinion. Add some reasons of your own.

Extension: In the story you read about some of the things on the bridge that help with the problem of people driving when they are too tired. Can you think of some gadgets or inventions that could be put in cars to help drivers know if they are too tired?

Write a description of your invention and create a design.

HAVE YOUR SAY: Do you believe the bridge is a good idea? Use full sentences to explain why or why not. No one-word answers.