Kids set sail on adventure of a lifetime Erin and Dave Carey with their kids Hamish, 11, Jack, 10, and Christian, 6, are planning on travelling around the world on a yacht. Picture: Kelly Barnes

A South Australian family have sold their house to sail around the Atlantic Ocean, refusing to allow COVID-19 travel bans to get in their way.

Dave and Erin Carey and their three boys Hamish, 11, Jack, 10 and Christian, 6, have set their sights on heading towards Portugal and the nearby Azores Islands next month.

The Careys have previously spent two years at sea after deciding to ditch their regular lives and put family first.

“We both kind of felt like we weren’t spending enough time with our kids and doing things that were important to us,” Ms Carey said.

“Our life was full of obligatory* things that we didn’t necessarily want to do but felt like we had to to be a normal part of the community.”

Before setting sail the first time, both Mr and Ms Carey had never sailed before in their lives.

“We’d never sailed before, hadn’t owned a boat and had no experience whatsoever,” Ms Carey said.

The family was inspired after watching a documentary about Laura Dekker, the youngest person to circumnavigate* the world solo.

They then came across SV Delos, a group of friends that runs a YouTube channel documenting their journey sailing around the world.

In February 2018, the Careys packed their bags, bought a boat and headed towards the Caribbean.

They boarded their 47-foot (14.3m) yacht, Roam, and set off for two years around the Caribbean islands, towards the Azores. The Carey family aboard their boat Roam. Picture: Erin Carey

She said family and friends were hesitant at first when hearing of the Careys’ plans to take to the seas.

“Everyone thought we were crazy,” Ms Carey said.

“There were plenty of times where it was really hard to save up the money and make the sacrifices we had to make.”

While their savings were getting low during their first voyage, Ms Carey set up a company called Roam Generation that manages the publicity of other nomads, including SV Delos.

Ms Carey said that although their trip came with challenges, rejecting the norms* of everyday life and learning to become resourceful helped her children, husband and herself develop.

“Because the lifestyle is so challenging, you’re constantly getting this feeling of reward by fixing things, making things or arriving somewhere safe.”

This time around, they have decided to “bite the bullet and go all in”, according to Ms Carey, selling their home at Largs Bay to fund a trip that has no return ticket.

The children will be homeschooled via an American program with prerecorded video lessons.

But it has not come without its challenges, thanks to COVID-19.

The Careys have successfully applied for a travel permit to fly from Adelaide to Portugal in March, via Qatar and Sweden.

Roam is currently sitting in storage in the Azores, where the Careys are aiming to travel to from Portugal.

They will work on Roam for two weeks to ensure it is safe to take to the seas.

Ms Carey said she is aware of the risk involved with quarantine and borders, but they have no choice because the boat has been sitting for 18 months.

“It’s a risk, we don’t know if Sweden is going to shut its borders at any moment,” she said.

If Roam were to stay in storage for more than 18 months, they would be forced to import it to Europe, which would cost $20,000 in taxes.

“Things are just so up in the air at the moment,” Ms Carey said.

Ms Carey said you can only travel the Atlantic when weather permits at certain times of the year, and wants to leave before her children reach high-school age.

The family committed to months of research, having been back in Australia for almost a year and a half.

“It was hard to find a place that allows Australians in at that moment where we don’t have to quarantine.”

Qatar Airways are the only international operator flying out of Adelaide currently, and Sweden is one of the few countries allowing travellers from Australia to enter.

“It’s a risk, we don’t know if Sweden is going to shut its borders at any moment,” Ms Carey said.

Once they have the boat ready, the Careys are hoping to sail into the Strait of Gibraltar and through to the Mediterranean.

“The goal is to make it back to Australia, but who knows how long that will take.”

The Carey family sail through the Grenadines in the Caribbean

CLASSROOM ACTIVITIES
1. Adventure v School Learning
The Carey family certainly have an adventure awaiting them. Normally kids like Hamish, Jack and Christian would be in primary school doing learning similar to you. But instead, they are about to sail around different parts of the world for the second time. Work with a friend and brainstorm the different types of learning they’ll be doing while sailing around the world, compared to living on land and going to a school like yours. 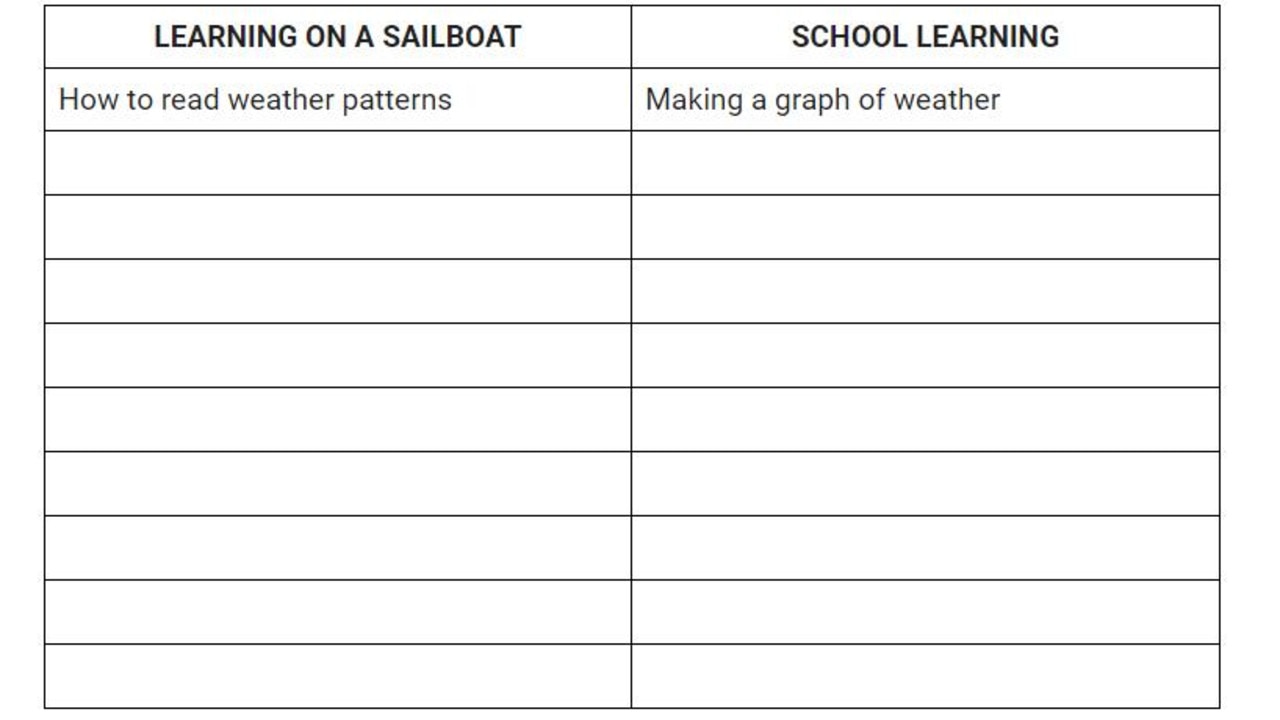 2. Extension
List the advantages and disadvantages of living the life of sailing around the world and learning on the boat versus living in one place and attending school. 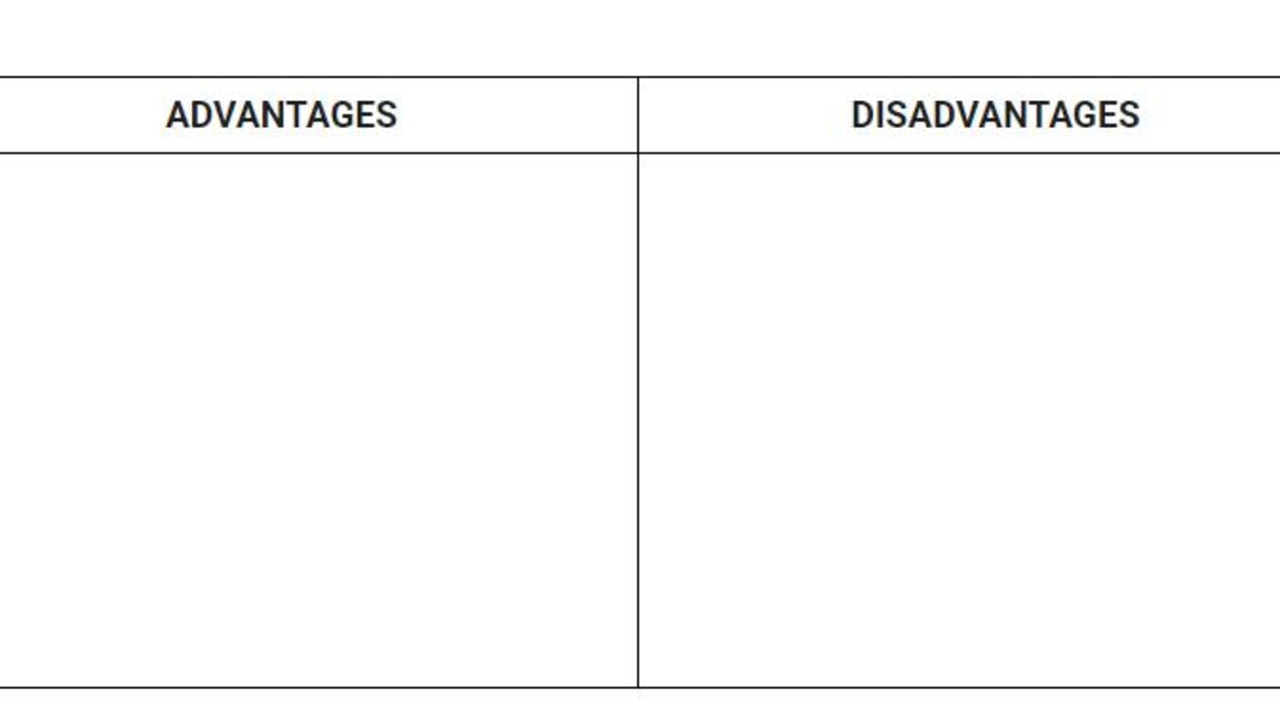 Use a table like this to record your answers

VCOP ACTIVITY
Up-level it
Scan through the article and see if you can locate three words you consider to be basic, or low level. These are words we use all the time and that can be replaced by more sophisticated words. Words like “good” and “said” are examples of overused words.

HAVE YOUR SAY: What would you like most and least about living on a yacht?
No one-word answers. Use full sentences to explain your thinking. No comments will be published until approved by editors.