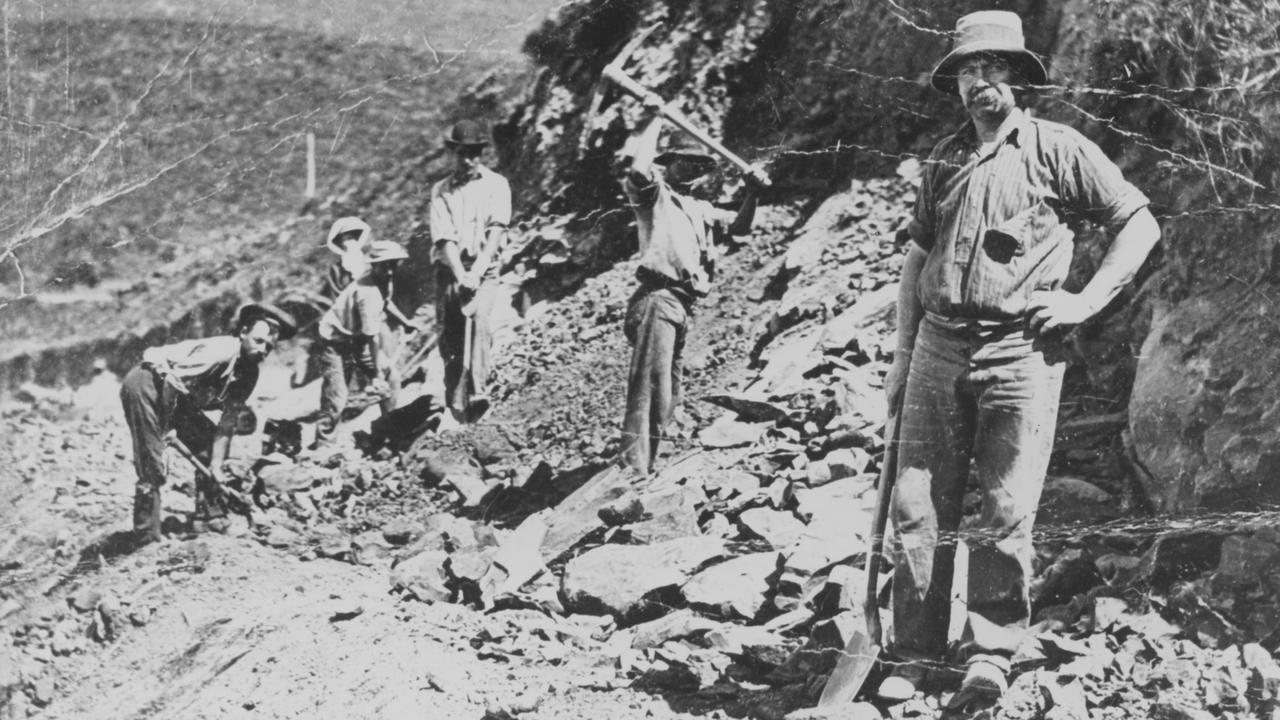 Building the Great Ocean Road was backbreaking work for the returned soldiers.

It’s 100 years since work began on the world’s biggest war memorial, which is not a grand building in a big city but a winding country road on Australia’s southern coast.

Construction on the Great Ocean Road began on September 19, 1919 when a small crew of war-weary soldiers, home from the battlefields of World War I, began chipping away at the cliff faces between Lorne and Aireys Inlet in Victoria.

It took 13 years, but they carved out a track using picks and shovels, buckets and wheelbarrows, eventually building a 243km road from Torquay to Allansford that would become both the largest war memorial in the world, an Australian National Heritage-listed landmark and one of our most popular international tourist ­attractions. Today the Great Ocean Road — one of the first roads in Australia constructed purposely as a scenic tourist route — attracts more visitors than Uluru and the Great Barrier Reef combined. Jewell and Amanda from Singapore at the Twelve Apostles. Picture: Alex Coppel

More than $1.3 billion was spent by visitors to the region last year, but back in 1918 the state government was reluctant to fund the new road, and several councils opposed it, declaring they had “no money to waste on tourists”.

In the end it was mostly paid for by the Returned Services League*, with help from local communities that held fundraising concerts and swimming carnivals, as a memorial to Victorians who served in WWI and a way to ­provide employment for returned soldiers.

More than 3000 men worked on the road, in often very dangerous conditions and wild weather, shifting boulders and scrambling down ropes bolted into the rock face hundreds of metres above the churning ocean. The names of only about 400 of the men are known, the remaining 2600 lost along with historical records.

A documentary marking the centenary of construction, The Story of the Road, is piecing together their stories.

VIDEO: A trailer for the documentary The Story of the Road

The Story of the Great Ocean Road

“A lot of people will pull in for the view or to take a photo without having a sense of how this engineering marvel took place,” Peter Spring, a member of the Lorne Historical Society, said.

“From the ridgeline, the servicemen would lower themselves over and down the cliff with a rope around their waist.

“At the grade level line, they would dig themselves a couple of footholds and then basically start digging into the cliff.

“It was all done with pick and shovel. In those days, so many of the return servicemen were shell-shocked by the war that they couldn’t really use explosives.”

The diggers camped along the road in places like Grassy Creek and St George River, and named key points after the war they had just endured.

Near Big Hill, Somme is an area reminiscent* of the muddy French battlefield where many soldiers were killed or injured.

Sausage Gully and Shrapnel Gully, not far from the Cape Patton lookout, are a tribute to Gallipoli’s Anzac Cove in Turkey.

“The road itself is the memorial to the servicemen,” said Mr Spring, who believes the road should be renamed the ANZAC Highway.

“You’ve got 3000 men who have been in the worst conditions imaginable in WWI and then they came back and tackled this incredible project.

“It is the sheer* doggedness* of those soldiers that made that road.” An early photo of a section of the Great Ocean Road.

The first section between Lorne and Eastern View, where the Memorial Arch stands today, was opened in 1922. Much of the road was unsealed, single-lane, treacherous* in wet weather, and many thought it suitable only for thrillseekers.

“Few tourists are likely to venture* over it … the road is so narrow that a slight error in backward steering would give the sea a plaything and the monumental mason* a job,” declared one newspaper at the time. The early Great Ocean Road was rough, muddy and dangerous.

The rest of the road, which stretched to Warrnambool, opened to fanfare and fireworks at the end of 1932.

Now, the “engineering marvel” lures 6.2 million visitors each year, most driving from east to west, kicking off in Melbourne. The Twelve Apostles attracts up to 12,000 visitors a day. The lighthouse, made famous by Australian kids’ TV show Round the Twist, has stood on the cliffs at Aireys Inlet since before the Great Ocean Road was built. Split Point Lighthouse at Aireys Inlet, which features in the kids’ TV show Round the Twist. Picture: Jake Nowakowski

In the early days, travellers paid two shillings and sixpence to drive the road, plus an extra shilling and sixpence per passenger. The toll was removed in 1936. Some locals, including Timboon Ice Creamery founder Tim Marwood, are now in favour of reintroducing a toll to pay for much-needed facilities and maintenance on the road.

“The sheer volume of numbers is a challenge that has to be managed. The infrastructure is not providing a suitable facility. The interpretative facilities are completely overwhelmed in peak periods,” said Mr Marwood, adding there are too few public toilets at rest areas. “We need a user-pays system for the coast road. I think it’s ­inevitable*.”

VicRoads* and the Victorian state government confirmed that neither had plans to toll the Great Ocean Road or adopt the ANZAC Highway name.

The state and federal governments have committed to spend more than $150 million over eight years for upgrading the road and geotechnical works to keep it open and safe.

The cliffs are being eroded at a rate of 2cm a year, the rock arch known as London Bridge famously fell in 1990 (leaving two startled sightseers stranded and in need of a helicopter ride) and a couple of the Twelve Apostles have crumbled, so now they are just seven and a half of the original nine left. In some places, the road itself seems in danger of sliding into the sea, just metres away from sections of the beach that have washed away. 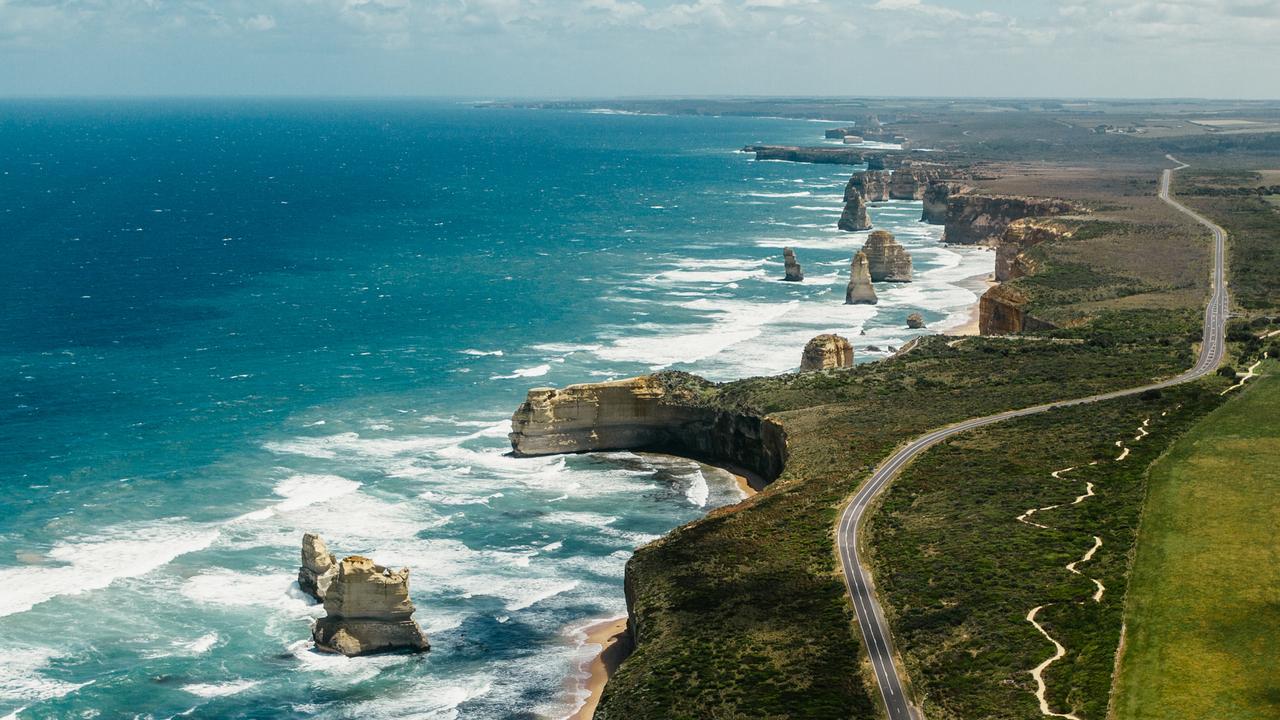 Australia to get Eden Project at former coal mine

Diary of a Gallipoli ANZAC

2. Extension
Imagine that it is 1919 and you could interview the person who came up with the idea of building the Great Ocean Road. Write at least four questions that you would ask them. Then, write the answers that you think they would give you.

VCOP ACTIVITY
A Digger’s Journal
Write a journal entry or two for one of the war veterans as they used manpower not machines to create 243km of track. Use the article to reference the tools being used and try to imagine what it would have been like. Really capture the emotion and hard work with your words.

HAVE YOUR SAY: Do you think the name of the Great Ocean Road should be changed to the ANZAC Highway?
No one-word answers. Use full sentences to explain your thinking. No comments will be published until approved by editors.