Amazing volcanic world discovered deep in the ocean off Australia Mapping of the volcanic seamount chain found off the east coast of Tasmania by the CSIRO vessel Investigator. Picture: CSIRO

Australian scientists have discovered an amazing underwater volcanic mountain range off the coast of Tasmania.

Explorers on the Commonwealth Scientific and Industrial Research Organisation (CSIRO), ship Investigator made the find while mapping the sea floor 400km east of Tasmania. The project is led by scientists from the Australian National University.

A chain of seamounts, or undersea mountains, was spotted in deep water, offering the first glimpse* of a spectacular underwater world.

The mountains rise up to 3000m from the sea floor, but the highest peaks are still 2000m beneath the waves.

“Our multibeam* mapping has revealed in vibrant* detail, for the first time, a chain of volcanic seamounts rising up from an abyssal* plain about 5000m deep,” said Dr Tara Martin, from the CSIRO mapping team.

“The seamounts vary in size and shape, with some having sharp peaks while others have wide flat plateaus*, dotted with small conical* hills that would have been formed by ancient volcanic activity.” A picture created by the multibeam mapping of the volcanic seamount chain by the CSIRO vessel Investigator. Picture: CSIRO

The area is also crowded with marine life. “While we were over the chain of seamounts, the ship was visited by large numbers of humpback and long-finned pilot whales,” said Dr Eric Woehler from conservation group BirdLife Tasmania, who was there to study seabirds and marine life. Humpback whales found in the area where a lost world of volcanic seamounts were discovered off the coast of Tasmania. Picture: Eric Woehler

“We estimated that at least 28 individual humpback whales visited us on one day, followed by a pod of 60-80 long-finned pilot whales the next. We also saw large numbers of seabirds in the area including four species of albatross and four species of petrel.” A black browed albatross found where a lost world of volcanic seamounts were discovered near Tasmania. Picture: Eric Woehler

The seamounts may be important for navigation* for some migratory* animals, particularly whales.

“These seamounts may act as an important signpost on an underwater migratory highway for the humpback whales we saw moving from their winter breeding to summer feeding grounds,” said Dr Woehler.

More surveys will be conducted during research voyages planned for November and December.

This article originally appeared on Fox News and has been reproduced here with permission. 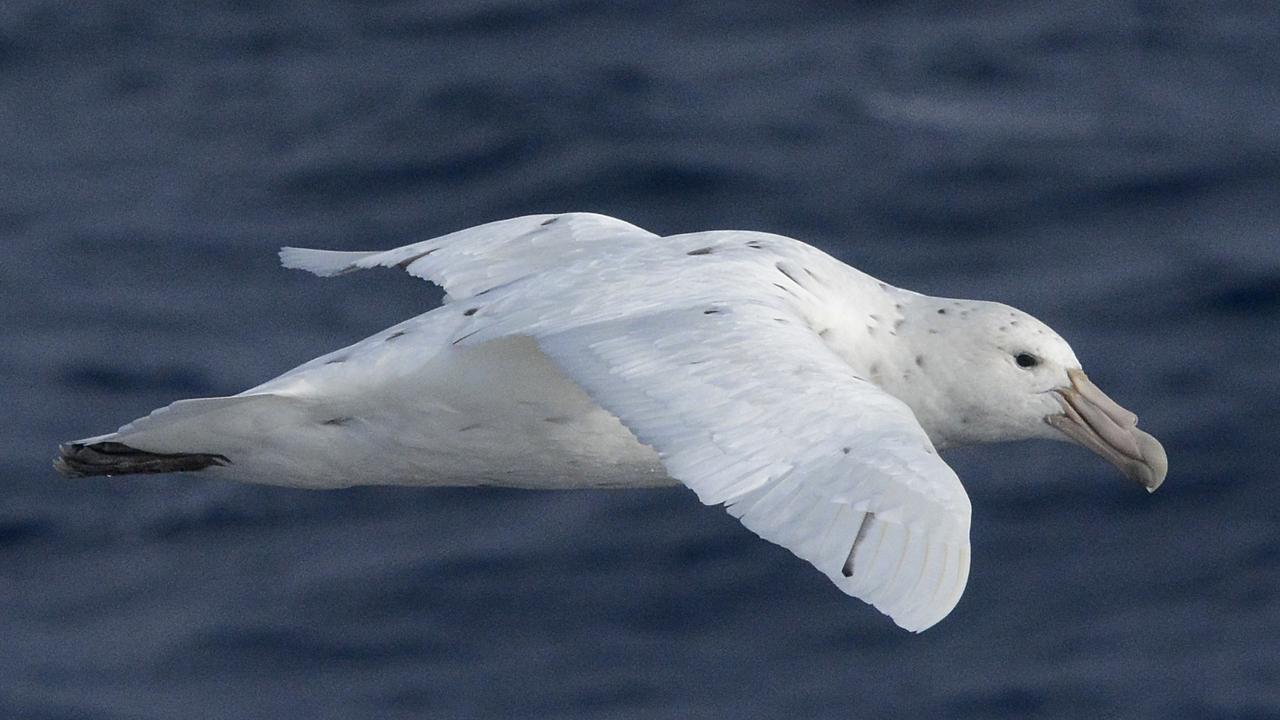 A southern giant petrel found where a lost world of volcanic seamounts was discovered off Tasmania. Picture: Eric Woehler

glimpse: a quick or partial view

multibeam: a system of sending sound waves that bounce back, taking longer the farther they have to travel to and from the thing they bounce off

plateau: level ground on the top of a mountain

navigation: planning and following a route

migratory: an animal that migrates

1. Where is the underwater mountain range?

2. How tall are the biggest mountains?

3. How deep is the ocean there?

4. What two species of whale are mentioned?

5. How many species of petrel did they see?

Create an artist’s impression of what you imagine the sea floor to look like in this section of the ocean. Use the description in the article to help you imagine what it would look like. You can use whatever you have available to create your picture. Some ideas include pencils, markers and crayons, pastels, paint, collage or a combination of these. A painted ocean background with a silhouette image of the mountain range using pastel or a dark-coloured paper collage could look very effective.

Extension: Find out about humpback or long-finned pilot whales’ migration patterns. Write a short explanation of when, where from and to, how and why they migrate. Include reference to how the findings from this research may help the whales migrate. You may include other information if you wish.

HAVE YOUR SAY: What would you like the scientists to learn more about when they visit the undersea volcanoes over coming weeks?