US election: How does it work and what could happen? This combination of pictures shows Democratic presidential candidate and former US Vice President Joe Biden at a drive-in event in Coconut Creek, Florida, on October 29, 2020 and US President Donald Trump at a campaign rally at Green Bay, Wisconsin on October 30, 2020. Picture: AFP

This year’s presidential election is one of the most watched in US election history – regardless of whether Donald Trump or Joe Biden is the winner.

Here’s a guide to what will and could happen.

WHEN IS THE ELECTION?
The US presidential election is held every four years on the Tuesday after the first Monday in November. This year’s election is held on Tuesday, November 3 US time (Wednesday November 4 AEDT*).

States where voting is very close or that change between Republican and Democrat each election are called swing states. WHO CAN VOTE?
People in all 50 states and in the capital city of Washington DC (not a state, but the District of Columbia) get to vote. Generally, to be eligible to vote you need to be a US citizen, aged 18 or older and be registered to vote. There are also some state-specific eligibility rules.

Unlike in Australia, voting is not compulsory. In recent elections, about 55 per cent of the voting-age population voted.

HOW DO PEOPLE VOTE?
People can vote before the election or on election day.

This year, partly because of the coronavirus pandemic, a record number of Americans have voted early, many by mailing in their vote. By November 3 (Australian time), more than 97 million (of about 255 million people of voting age) had already voted – more than half of the total number of people who voted in 2016.

Donald Trump has been claiming that mail-in voting is prone* to fraud*. While that claim is questionable*, it is true that the large number of postal ballots could cause delays in the final count. The electoral college meets every four years after election day to carry out that task. In 2020, the meeting is on December 14.

HOW DOES THE ELECTORAL COLLEGE WORK?
The electoral college was introduced by the founders of the US to avoid states with a larger population being unfairly represented.

Each of the 50 US states and Washington DC is given a set number of electors (at least three each), roughly proportionate* to its size and number of congressional districts.

Of the 538 electors, California has the most with 55 electoral votes (representing its 53 congressmen and two senators), Texas (38) and New York (29) and Florida (29) are the next largest.

All states except Maine and Nebraska use a winner-takes-all system of voting, so whoever wins the most votes takes the entire haul* of electoral college votes for that state.

The electoral college result usually reflects the popular vote, which is each vote made by each individual voter in the general population.

But this is not always the case. In 2016 Democrat Hillary Clinton won the popular vote but lost the election because she did not secure a majority of the electoral college.

WHAT ARE THE STATES TO WATCH?
The main swing states are North Carolina, Florida, Michigan, Wisconsin, Arizona, Texas and Pennsylvania. Arizona and Texas are traditionally strongly Republican but there has been increasing support for the Democrats in the lead up to the election. 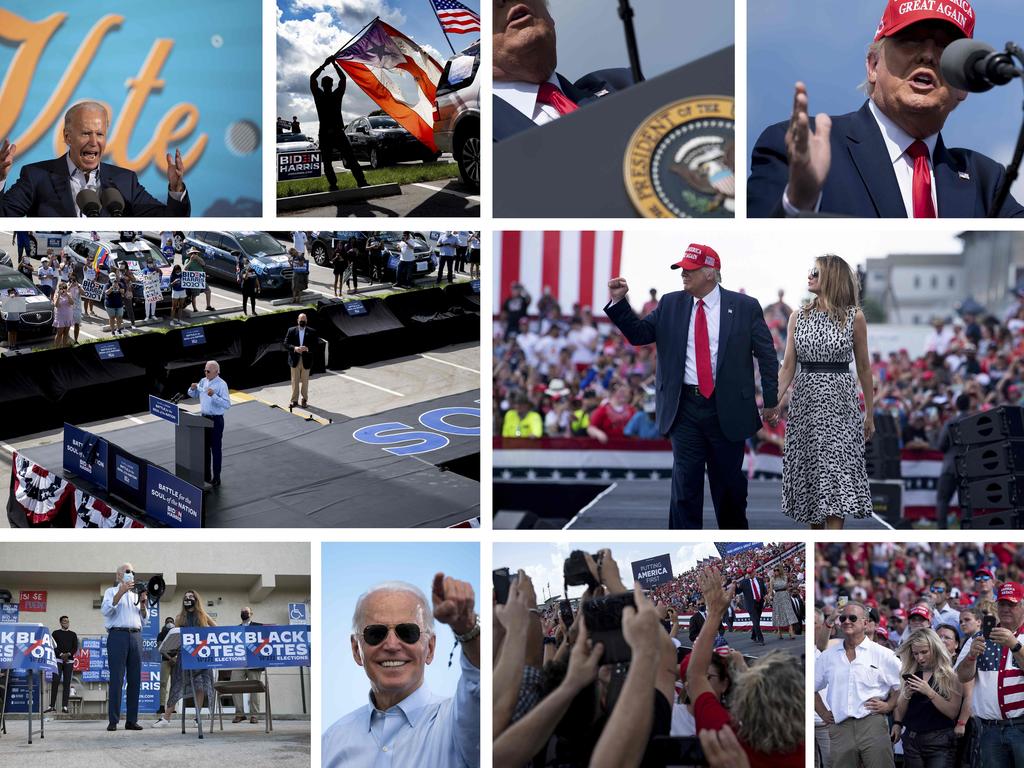 Whether Republicans or Democrats control the House and Senate is important for getting things achieved after the election, such as passing new laws.

It is possible that the Democrats will control both the House and the Senate regardless of who is president.

WHEN DO WE GET RESULTS?
Because of a range of time zones across the US, voting closes progressively* across the day. Voting closes in Indiana (East) and Kentucky (East) at 9am on Wednesday November 4 (AEDT).

By 11am the key swing states of Florida, North Carolina, Ohio and Pennsylvania will have closed. Most polls will have closed by 12pm (AEDT) with just a handful remaining open until 4pm (AEDT). Alaska is the last state to close.

The results for North Carolina, Texas, Maine, New Hampshire and Florida as well as a number of non swing states are expected to be clear within hours.

But the large number of postal votes this year makes the timing of some results unpredictable.

WHEN WILL MAIL-IN VOTES BE COUNTED?
Most states allow election workers to start counting mail-in votes before election day but some swing states, including Pennsylvania and Wisconsin, can’t start counting until election day, making those states slower to report their results.

The formal process of making election results official varies state by state. Some states have deadlines within a week of the election. But the District of Columbia and 26 states, including six key swing states – Arizona, Florida, Michigan, North Carolina, Ohio and Pennsylvania – have set their deadlines between November 10 and November 30. Fourteen states, including the key swing state of Wisconsin, as well as New York, Texas and California, have deadlines in early December while four states – Hawaii, Rhode Island, Tennessee and New Hampshire – have no deadline.

WHAT HAPPENS NEXT?
Under the electoral college process, the 538 electors who have been selected by each state must cast their votes on December 14 for president and vice president.

The president will be inaugurated* on Wednesday January 20, 2021.

WHAT COULD GO WRONG?
This is one of the most controversial US elections ever, partly because Donald Trump has indicated he may try to stop vote counts before they are complete, seize votes or refuse to give up the presidency if he loses. It’s not clear how or whether he can actually do any of these things.

Impeachment: Trump not guilty on both charges

What happens on election day and why?

CLASSROOM ACTIVITIES
1. Compulsory or Not
In recent years only 140 million of the possible 255 million people have voted in the US elections, which is just over half (55 per cent) of the population.

In Australia it is compulsory to vote in elections otherwise you are fined, which results in most people voting.

2. Extension
Why do you think in this strange pandemic year of 2020, have 97 million people voted early in the 2020 election, more than half of those who voted in the 2016 election?

Give your reasons below:

HAVE YOUR SAY: What do you think will happen in the US election?
No one-word answers. Use full sentences to explain your thinking. No comments will be published until approved by editors.