A shape that looks like a ship in the ice as seen on Google Earth and posted on YouTube. Picture: YouTube/MRMBBB333

Conspiracy theorists claim they’ve found a huge capsized* ship on Google Earth about 160km off the coast of Antarctica.

The 121m-long object does look like a boat or ship, with what appear to be chimneys and a line of windows. 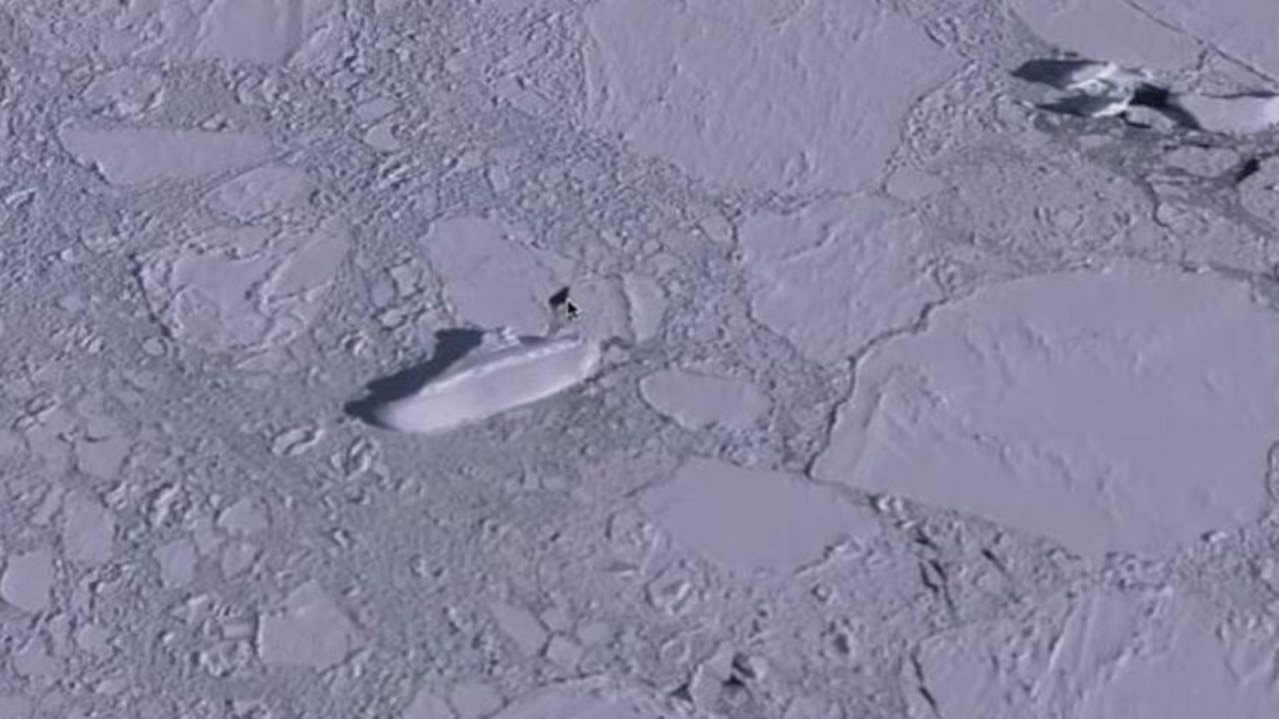 A screenshot of the shape from Google Earth. Picture: YouTube/MrMBBB333

A conspiracy theory suggests a secret and powerful organisation is behind a difficult-to-explain event (see below).

The boat or ice ship discovery has sparked a wave of conspiracy theories online, with some claiming it is linked to a secret Nazi* base in the Arctic, or is there to transport world leaders in times of global crisis.

A clip of the strange find, which is most likely an oddly-shaped iceberg, was uploaded to YouTube last week by user MrMBB333.

MrMBB333 has a large online following. Fans send in strange stuff they’ve spotted on Google Earth and elsewhere, which are then discussed and people try to think up explanations.

Following the ice ship post, YouTube commenters suggested the mystery shape was linked to various government conspiracies, including that is was left there to be used by world leaders to escape natural disasters.

“It probably is a ice ship that was built in the 2nd world war,” one user suggested.

Others seemed to think the object was left there by aliens.

“They’ve been going down there for 80 years or more so there’s no telling what they’ve found or left behind,” one commenter posted.

The answer to why we can see an ice ship on Google Earth is almost certainly far simpler and closer to home than anything to do with aliens. Someone spotted what looks like a capsized ship on Google Earth.

The ice ship find is probably the result of pareidolia, which is a normal and terrific skill humans have.

Pareidolia is the ability to see patterns in randomness. It explains why the brain sees shapes, structures and patterns where they do not exist, such as animals in the clouds.

According to NASA: “Pareidolia is the psychological phenomenon* where people see recognisable shapes in clouds, rock formations, or otherwise unrelated objects or data.

“There are many examples of this phenomenon on Earth and in space.” Pareidolia is the ability to see patterns in randomness. Though this is an artist’s illustration, most of us have seen other incredible things in clouds, such as animals or mythical creatures.

A conspiracy theory is a story to explain an event, suggesting that an organisation is doing bad things and keeping them secret.

The organisations people blame in a conspiracy theory include governments, spy agencies, armies or even alien races.

Conspiracy theories are based on rumours, lies or exaggerations.

People make up or share conspiracy theories to try to make sense of an event they are worried or angry about or don’t understand.

They do this because it is difficult or impossible to explain the event or because they don’t believe (or want to believe) the actual explanation or the people who are giving the explanation. Zooming in a little more helps our brains understand that it’s probably just an iceberg not an ice ship. Picture: YouTube/MrMBBB333

First ever global rule book for the internet

CLASSROOM ACTIVITIES
1. Write an explanation
Write a ‘comment’ that could be put onto MrMBB333’s post about this ‘ice ship’ explaining pareidolia and how this is the most likely explanation for what people are seeing.

Although your ‘post’ is not really being published, when you post comments online they are available for anyone to read. Make sure it is clear, polite and respectful of differing opinions. It also needs to be fairly short. Aim for less than 100 words.

You can use one of these as inspiration or come up with your own theory and write a short narrative about how it got there and why. Your story can be completely made up or be based partly on real life events. (For example, if you were using the theory about it being for world leaders to escape natural disasters – you could include the current pandemic as the reason it is used in your story.)

HAVE YOUR SAY: What’s the best conspiracy theory you’ve ever heard? How do you know it’s just a conspiracy theory?
No one-word answers. Use full sentences to explain your thinking. No comments will be published until approved by editors.