After a freak hailstorm turned a beach white, we look at what causes hail and if it’s dangerous Cooper 10, holds one of the large hail stones that pelted down in Templestowe, Victoria in 2017. Picture: David Caird

A freak* and furious hailstorm has turned an Australian beach into a winter wonderland*.

Heavy hail came down in the coastal town of Cape Paterson in Gippsland, Victoria on Friday and transformed the sandy shoreline into a sea of white. It also turned horse paddocks into icy fields and tennis courts into surfaces more suitable for ice hockey.

It made for an unusual sight and got us wondering here at Kids News, what causes hail?

Here are some answers: Facebook images of the beach at Cape Paterson in Victoria after it was turned into a sea of white. Picture: Brad Richards

WHAT CAUSES HAIL?
Hail is created when small water droplets* are caught in the updraught* of a thunderstorm. These water droplets are lifted higher and higher into the sky until they move way above the freezing level and they form into ice. Once they become too heavy for the updraught to support, they will start to fall as hail. How hail forms from Bureau of Meteorology

Hailstones start as small ice balls (called hail embryos*) if they come into contact with tiny particles in the air, such as a speck* of dust or dirt, or a salt crystal.

Growth into a full hailstone happens in the hail growth zone, where the updraught air temperature is -10 degrees Celcius* to -25 degrees Celcius. Here, hail embryos collide with super-cooled water droplets, causing them to freeze on impact. Once the hailstones have collided with enough of these droplets, building up in size, they become heavy enough for gravity* to take over, and begin to fall.

Hail can only form in thunderstorms or Cumulonimbus clouds*. Hailstones the size of tennis balls.

HOW BIG CAN HAILSTONES GET?
Hailstones can be as big as the size of a cricket ball.

Their size depends on the strength and size of the updraught. Most of the time hailstones are smaller than 25mm which is about the size of a 10c piece. However, in very intense thunderstorms, the upward air motion inside the updraught is so strong that even larger hailstones are suspended or fall very slowly. In these storms, hailstones have more time to collect even more super-cooled water droplets and grow to larger sizes, such as golf-ball or cricket-ball size. 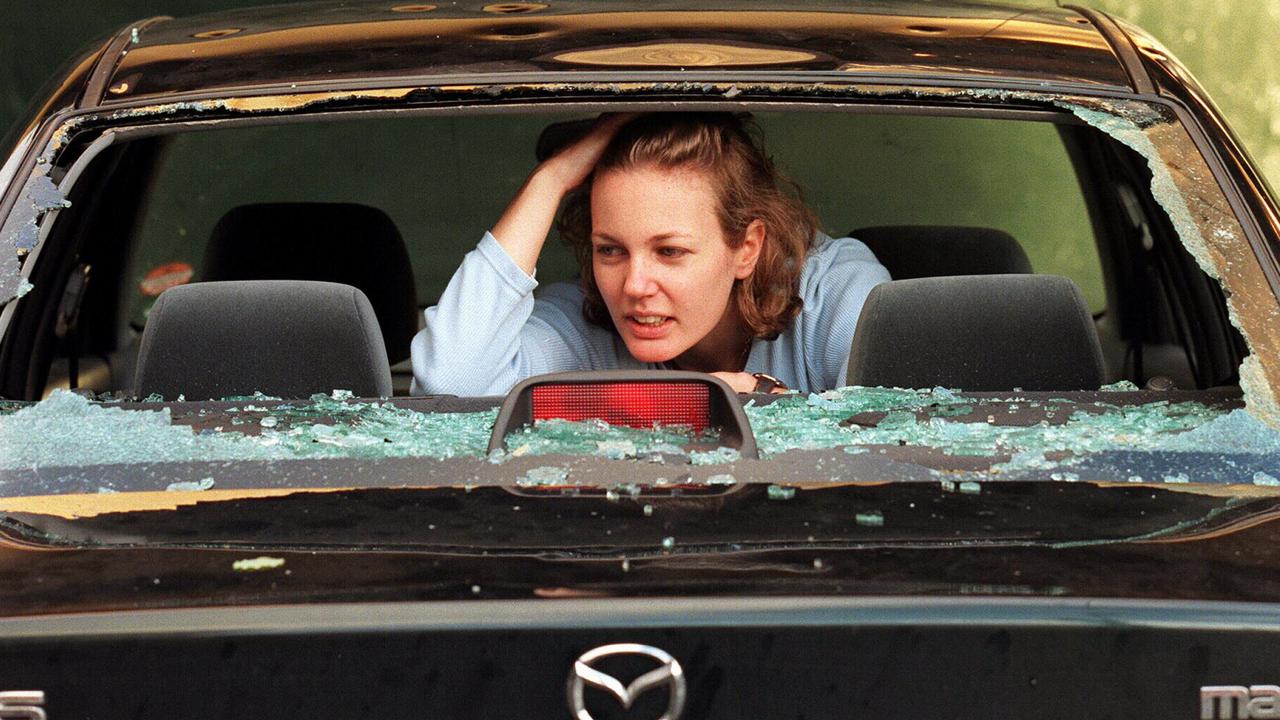 Hailstones the size of cricket balls hit the city at more than 200km/h. The storm hit 85 suburbs, causing damage to 20,000 houses, including windows, roofs and skylights.

More than 70,000 cars had windscreen and panel damage and 25 commercial planes were affected.

When the storm was at its worst, emergency services received a call for help every 10 seconds.

When it was over, the damage bill came to $1.7 billion, the most expensive natural disaster in Australian history. Sydney resident Greg Moore with his ruined attic roof after Australia’s worst hailstorm in history in 1999.

MOST COMMON TIMES FOR HAILSTORMS IN AUSTRALIA
Hail can occur at any time of year, but large hail is most common in Australia during spring and early summer when temperatures are warm enough to promote the development of strong thunderstorms and the upper atmosphere is still cool enough to support growth of stronger storms.

Why does lightning strike twice?

CLASSROOM ACTIVITIES
1. Draw a diagram
Based on the information presented in the article, draw a diagram that shows how hailstones are formed. Be sure to include a heading, pictures, labels and directional arrows to make the information easy to understand.

2. Extension
Weather is actually a fascinating thing, don’t you think? Choose another type of weather event and find out 3 facts about it to share with a friend.

Suggested weather events: cyclone, dust storm, rainbow, snowfall (or choose one of your own).

VCOP ACTIVITY
Quizzing Questions
Kids News has already including some investigation questions into hail … but is there anything else you would like to know about hail, or about weather in general?

See if you can come up with 5 different questions about hail or weather.

What question stems did you use (the start of your questions)?

What question stems did Kids News use?

Can you find the answer to one of your questions by completing a bit of research?

HAVE YOUR SAY: Have you ever been caught in a hailstorm? Was any damage caused to your home or car?
No one-word answers. Use full sentences to explain your thinking. No comments will show until approved by editors.