Volunteers collect plastic as part of Trash Hero event in Bangkok, Thailand on August 25. Hundreds of people gathered on the bank of the Chao Praya river to clean it from the tons of plastic waste carried by the current. Picture: AFP

Young Australians are anxious about the state of the environment, with some blaming adults for the problems with plastic waste.

A new survey of 546 children aged 12 to 18 years found 82 per cent felt hopeless about plastic waste and 25 per cent blamed adults for the single-use plastic waste problem.

The YouGov survey found 97 per cent of the children surveyed said they felt anger or sadness when they saw plastic waste, believing most of it ended up in the oceans.

The release of the survey results come as the Australian Medical Association (AMA) declared climate change a health emergency.

The AMA — which speaks on behalf of doctors — announced it accepted the science that climate change was real and that it would have an impact on human health and wellbeing.

For many people, plastic waste is one of the most visible reminders of humans’ role in global warming leading to climate change.

Sophia Skarparis, 16, said many young people wanted to do something about plastic waste but just didn’t know how to make a difference, which was leading to eco-anxiety*.

Sophia became the 2018 Australian Geographic’s Young Conservationist* of the Year after she collected more than 12,000 signatures to ban single-use plastic bags in NSW. Meghan, the Duchess of Sussex presented her with the award last year. Her own efforts began after experiencing eco-anxiety about the amount of plastic littering the soccer fields she trained at.

“Playing (soccer) allowed me to be in the moment and release my stress but when I started noticing the plastic, it made me stressed and anxious,” she said.

“Most of the fields were littered with plastic and I had no idea where it came from.”

After doing a personal project on the issue she realised many in the community were doing great things and it was possible to take action.

She has partnered with SodaStream, which also commissioned the survey conducted by YouGov Galaxy in June and July this year, to launch a virtual reality experience called Ocean of the Future that shows the impacts of single-use plastic in the oceans.

Sophia said she was grateful to SodaStream and to the Duke and Duchess of Sussex for allowing young people like her to have a voice on plastic waste.

The Sydney resident said it was “really amazing” to speak with Harry and Meghan at the National Geographic awards night.

The couple sat at her table towards the end of the night and Sophia said the best moment came after she had finished making her speech.

“After I came down the stairs, Harry gave me the thumbs up, which was amazing to see. I couldn’t stop smiling after that,” she said.

The Monte Sant’ Angelo Mercy College student said their attendance had allowed her to speak about the issue at a global level.

She said she was frustrated the NSW Government and other governments around the world were not doing more, and believes adults and children should come together to solve the problem. NSW is the only state in Australia not to have committed to phasing out plastic bags.

Sophia’s virtual reality game Ocean of the Future is on at the Overseas Passenger Terminal at Circular Quay, Sydney, NSW until September 7.

HOW IS PLASTIC RELATED TO CLIMATE CHANGE?
Plastic is made from fossil fuels. At every step of its life cycle, including after it is rubbish, plastic creates greenhouse gases.

Climate scientists understand that greenhouse gases are contributing to global warming, which is generally what we mean when we talk about climate change.

International environment organisations such as the World Wide Fund for Nature and Greenpeace regard plastic as a contributor to climate change. 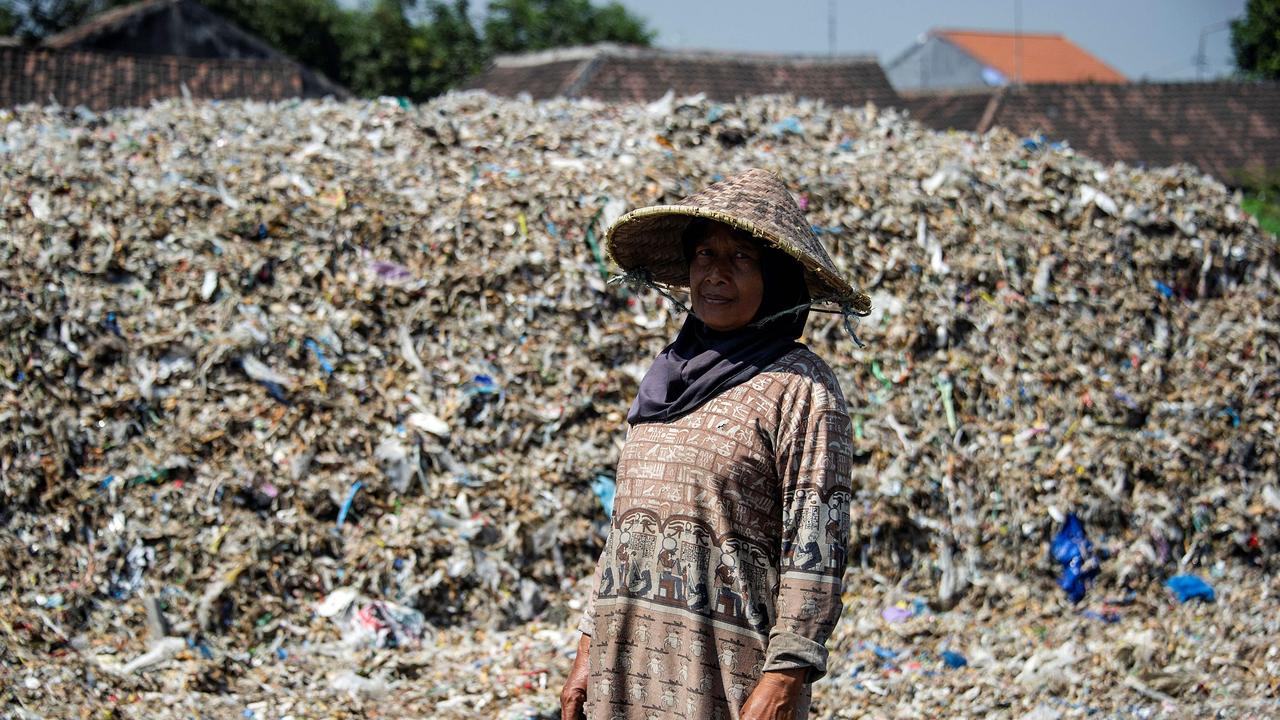 A villager on Java, Indonesia, preparing to sift through plastic waste, much of it from wealthy countries including the US, UK and Belgium, as well as the Middle East. Picture: AFP

Dr Sarah-Jeanne Royer, a researcher at the University of Hawaii, US, found that, as plastic breaks down, it makes greenhouse gases not included in previous climate change models and predictions.

“These emissions* are only expected to increase — especially as more plastic is produced and accumulated* in the environment and degrades* over time,” Dr Royer wrote in an article published by Greenpeace in 2018.

Her team found that single-use plastics were of particular concern as they are made of a substance that is the highest emitter* of greenhouse gases.

“Our research shows that as this plastic breaks down in the ocean, the greenhouse emissions increase dramatically,” she wrote.

“Unfortunately, that’s not all. Plastics exposed directly to sunlight in the air — like on land at beaches, coastlines, fields, and playgrounds — make an even greater contribution to greenhouse gas emissions.”

CLIMATE CHANGE A HEALTH EMERGENCY
The AMA announced this week that it recognised climate change as a health emergency.

AMA President, Dr Tony Bartone, said the evidence is in on climate change — and it is irrefutable*.

“The AMA accepts the scientific evidence on climate change and its impact on human health and human wellbeing,” Dr Bartone said.

The AMA called on the Australian Government to address climate change on health grounds. Tourists try to stay cool in Rome, Italy, during a record heatwave in June. Picture: AFP

Our paradise islands polluted by plastic

We have saved 1.5 billion plastic bags from landfill

CLASSROOM ACTIVITIES
1. Create a diagram
Create a diagram that will help other kids understand the most important things about plastics and the environment.

2. Extension
Do you think that it is right to blame adults for the problems of plastic waste? Write paragraphs explaining your opinion on this question.

VCOP ACTIVITY
Be the change you want to see in the world.
What do you think we mean by the title of this activity?

Sophia wanted to see a change in the world, so she did something about it. What could you do? Think big. Is there more you can do than just pick up litter around the school?

Create a campaign of your own, or as a class to see if you can start implementing a change that could help the environment.

HAVE YOUR SAY: How do you feel when you see plastic waste? Are you and others doing enough to limit plastic use and pollution? What more could we do?
No one-word answers. Use full sentences to explain your thinking. No comments will be published until approved by editors.