Students are having their lunchboxes searched for infected fruit as Tasmania tries to rid the state of its unwanted fruit fly crisis*.

Fruit flies look like normal flies but cause huge damage to fruit and some vegetable crops.

Tasmanians have been told to either eat their fruit, or double wrap it in plastic bags and throw it away (unless it is home grown), while fruit shops and stores have recalled* all fruit and emptied their fresh produce aisles*. 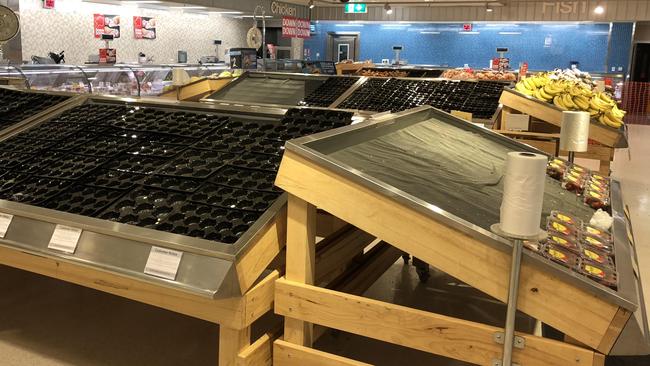 Empty shelves in the fresh produce section at Coles in Kingston as the fruit fly scare continues to bite in Tasmania. Picture: Phil Young

Apples, apricots, bananas, mangoes, oranges, berries, tomatoes and nectarines — no matter where they were grown — have been removed from all shops across Tasmania.

Children and parents are being urged to check for “stings” visible on the outside of the fruit. A “sting” is a mark caused when a female adult lays eggs into the fruit.

If the fruit is bad, you are more likely to see fruit fly maggots (larvae) than actual flies.

Tasmania is the only Australian state considered completely free of fruit fly. But the pest has been spotted in four ­locations in Tasmania’s north in the past five weeks, spreading from Flinders Island in Bass Strait to the fruit-growing centres of Spreyton and Sassafras near ­Devonport and 60km east at Georgetown, near Launceston. Fruit Fly larvae in a mango.

The government, Biosecurity* Tasmania and police have asked every householder, farmer, school and child to join the fight to rid the Apple Isle of the insect.

All movement and sales of fruit including apples, pears, grapes and cherries have been banned for 15km around all outbreak* sites.

At risk is $200 million worth of Tasmanian fruit exports — mainly apples and cherries — to major trading partners such as China, Japan, the US, Taiwan and South Korea.

“The fruit fly incursion*, which appears to be almost expanding week by week, presents a real and long-term threat to agriculture in this state,” Mr Johnston said. Government officials last week said they were confident they had identified and isolated* the source of the problem to a fruit fly treatment centre in Victoria.

North Tasmanian apple, pear and wine-grape grower Marcus Burns, whose Spreyton farm is in the middle of the affected zone, has had to bury pears he can no longer sell and juice stored apples that he would normally have sold in Coles shops in other parts of Tasmania.

“I find it alarming … where infected fruit has come into Tasmania in bulk when it should have been properly treated; if that’s the case fruit fly could have spread all over Tasmania by now and be very hard to control,’’ he said. Tasmanian apple farmer Marcus Burns in his orchard in Spreyton. Burns’ orchard is in the fruit fly infected zone and has apples about to harvest but can’t ship them to Coles and interstate as he normally would. Picture: Melanie Kate

CLASSROOM ACTIVITIES
1. Controlling the outbreak.
A Fruit Fly outbreak is a big problem for the Agricultural industry, can you answer these questions:

Write a list of the steps that are being taken to reduce the impact of this outbreak.

Extension
Using a map of Tasmania with a scale, locate and mark the areas that have been affected by Fruit Fly. Then draw a line around the areas where movement and sales of fruit has been banned.

2. Fruit Fly
Fruit Fly is not the only pest that can affect our agricultural/farming industry. Australia has very strict quarantine laws to prevent introducing problems like this to Australia and spreading them within Australia

Write a jingle (a catchy slogan or verse) to inform and remind people travelling into or around Australia of the potential risk of introducing or spreading diseases and pests. Include what they should do to ensure they don’t spread the problems.

Extension: Research more information about the fruit fly. Write a fact sheet about them. Include information such as; their life cycle (use a diagram), where they live, what they eat, how they multiply so quickly, what you can do to prevent them in your home, what measures are permanently in place to stop their spread interstate. Include a picture of a Fruit Fly.

IN ONE SENTENCE, TELL US WHAT YOU LIKE ABOUT TODAY’S STORY
Please do not use one-word answers. Explain what you enjoyed or found interesting in today’s article. Use lots of adjectives.