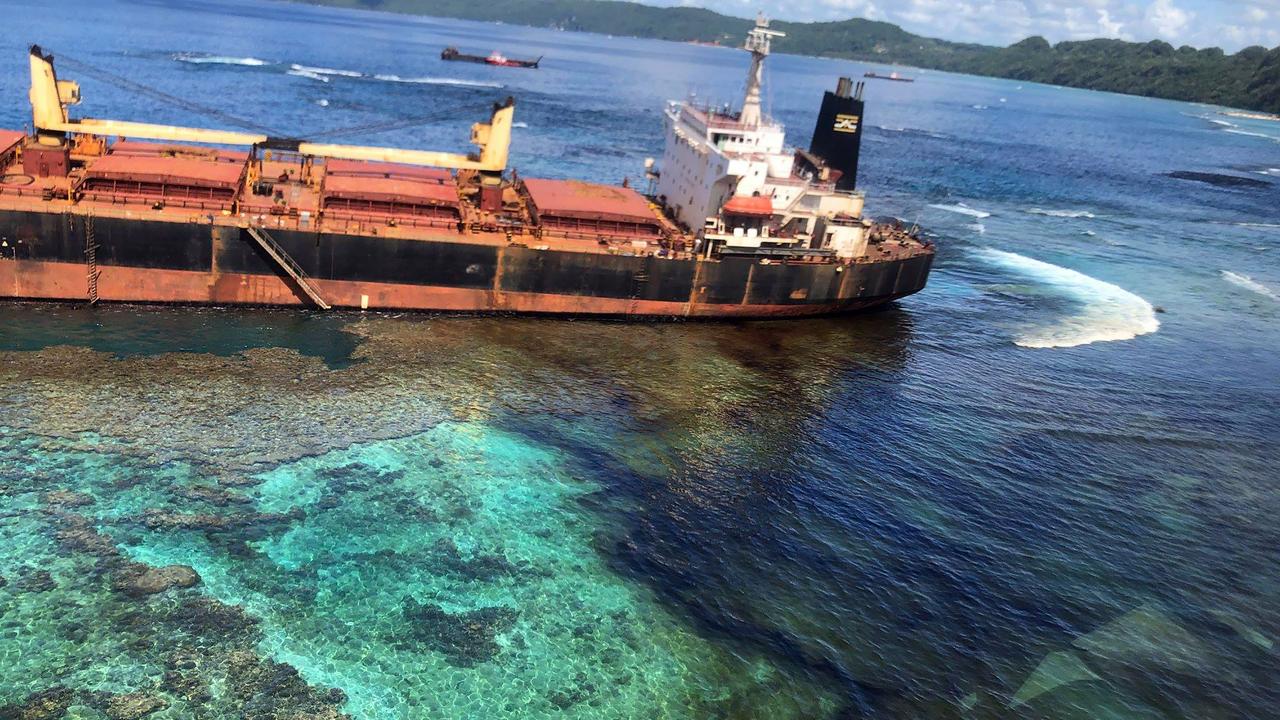 The ship Solomon Trader on the coast of Rennell Island. The ship ran aground and began spilling oil a month ago. Picture: AFL/DFAT

Solomon Islanders are struggling to cope with the impacts of a major oil spill that occurred as a result of Cyclone Oma last month.

A ship called Solomon Trader was pushed onto a reef and grounded on February 5 during the cyclone while collecting bauxite ore* from remote Rennell Island.

Coral damaged the side of the ship and at least 70 tonnes of oil spilt near a UNESCO World Heritage Site.

Another 600 tonnes of oil was also onboard the ship.

Australia is providing technical help and advice to the Solomon Islands government.

Australian Maritime Safety Authority* staff have observed the ship from the air and seen that oil is still leaking. They also reported that, as of this week, the oil covered 5-6km across the shoreline and was moving towards the World Heritage Area, according to the Australian Department of Foreign Affairs and Trade (DFAT). The people of Rennell Island, where the spill occurred, can’t swim, play or catch fish and shellfish in Kangava Bay and can’t collect freshwater from the streams and springs near the coast. Instead, they must rely on supplies brought in from the capital, Honiara, 240km away. The Solomon Islands are a tropical paradise and the people who live there rely on the sea and tourists who come to holiday in the beautiful natural environment. Picture: Michael Wayne

Bad weather hampered* early efforts to assess the damage and clean up.

However, problems with an onboard emergency generator also stalled the clean-up effort.

Environmental group Oceans Watch Solomon Islands’ Chris Bone expressed disappointment that three weeks after the spill, no oil booms* or dispersants* had been deployed in the area.

“It’s already a disaster. It would be terrible if the rest of it were released.”

The Solomons Island government has advised that the responsibility for the cleanup lies with the businesses involved, including the ship owner.

In a statement issued on March 5, DFAT said: “Australia has been profoundly disappointed by the slow response of these companies, and their lack of adequate communications with and responsiveness to the Solomon Islands government.”
OIL SPILLS
Oil spills can happen in the ocean or on land, wherever oil is being mined or transported, including in pipelines or on ships.

Oil is disastrous for the natural environment. It sticks to the feathers of birds and the fur of mammals. The oil limits the insulating ability of the fur or feathers, which means the animals aren’t able to keep themselves warm. They also don’t float in water as well. Oil in the water is poisonous to fish and other marine life and to humans. Humans can’t eat or use any of these marine animals or plants such as seaweed. An oil-soaked bird is examined on an island in an island in Prince William Sound, Alaska, US after the Exxon Valdez disaster in 1989. Picture: AP

There have been many major oil spills that have devastated natural environments, but one that received a lot of attention around the world was the Exxon Valdez spill in 1989 in Alaska. The Exxon Valdex oil tanker ran aground on a reef and spilt 35,000 tonnes of oil. It is considered one of the world’s worst human-caused natural disasters. The oil eventually covered 28,000 square kilometres of ocean.

In water, oil spills are often cleaned up with booms that skim the oil from the surface of the water so some of it can be collected, dispersants that break the oil into tiny droplets and sometimes by setting the oil alight and burning it. Workers try to remove globs of oil from Baked Island in Prince William Sound, Alaska, US, after the oil tanker ship Exxon Valdez ran aground on March 24, 1989. Picture: AAP

CLASSROOM ACTIVITIES
1. List the Problems
Write the initial problem ‘Ship running aground’ in the centre of your page. Create a mind map of all the problems it has caused already and the problems it may continue to cause.

Look over your work. Colour code the problems as HUMAN or ENVIRONMENTAL (or both).

For example: People can’t swim in the area – HUMAN

2. Extension
From the information given and from further research explain why oil spills have such a disastrous impact on the environment. Explain the impacts it can have and how timely clean-ups are important to reduce the immediate and long-term problems.

HAVE YOUR SAY: Write a message to one of the businesses involved explaining to them the need to clean up quickly and thoroughly.
No one-word answers. Use full sentences to explain your thinking. Your answers will not show until approved by editors.