When a young sperm whale washed up on a Spanish beach earlier this year, scientists were keen to find out what caused the animal’s death.

They now believe they know after seeing what was inside the whale’s stomach — almost 30kg of plastic.

The 10m-long whale found on the beach of Cabo de Palos in the Spanish region of Murcia on February 27, was unusually thin. The whale was unusually thin when it washed up on the beach.

Sperm whales usually eat giant squid as well as octopus, small sharks and other fish but this whale had eaten plastic bags, ropes, nets, a drum line, a plastic water container and sacks of straw.

It’s likely the whale would not have been able to digest or rid its body of the rubbish, experts said, resulting in its death from a stomach infection.

What makes the death all the more heartbreaking* is the fact that sperm whales are considered an endangered* species. Six out of the 13 great whale species are classified as endangered or vulnerable*, according to the World Wildlife Fund.

Local authorities in Spain have now started a campaign to clean up its beaches and oceans.

“The presence of plastic in the ocean and oceans is one of the greatest threats to the conservation of wildlife throughout the world, as many animals are trapped in the trash or ingest large quantities of plastics that end up causing their death,” Murcia’s general director of environment Consuelo Rosauro said.

Around 150 million tonnes of plastic is floating in our oceans with an extra eight million tonnes entering the water each year. This has created polluted areas called Great Garbage Patches. 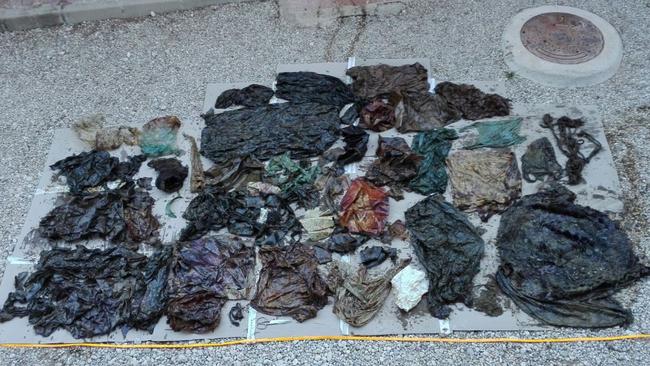 The plastic found in the dead sperm whale’s stomach.

The one closest to Australia is the Great Pacific Garbage Patch — between Japan and America — and the best way to imagine it is to think of a big plastic soup floating in the ocean like oil does. This map of the Pacific Ocean shows the garbage patches.

Here are some startling facts about the Great Pacific Garbage Patch: 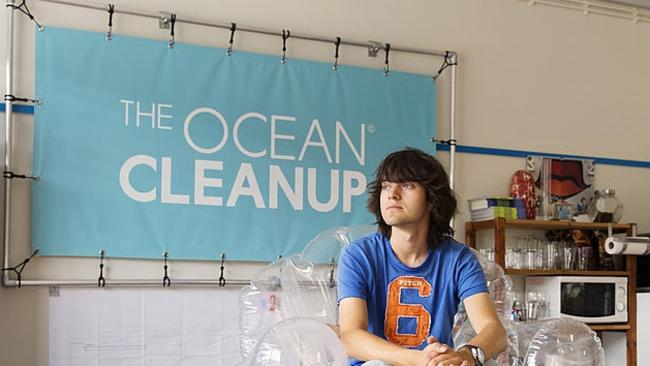 Boyan Slat, who set up The Ocean Cleanup.

TEEN BOY CREATES THE OCEAN CLEANUP
When Boyan Slat from the Netherlands was 16 he was shocked by plastic pollution in the ocean during a diving trip to Greece in 2010.

He made a promise to himself to clean it up.

Slat had an idea with a friend for a school science competition, which involved putting a long barrier in the sea to catch big bits of passing plastic. They won that competition.
Two years later, he started a university degree in aerospace engineering*, while continuing to research plastic cleanups. Soon after starting the course, Slat presented his solutions at a TEDx ideas conference and the video went viral around the world. He knew he was on to something.

He quit university and set up The Ocean Cleanup in 2013. Five years on, Slat remains CEO and founder, employing a growing team of 70 paid staff.

The Ocean Cleanup has begun floating 100km-long curved barriers (made from thermoplastic and high-density polyethylene, both of which are environmentally friendly) in the Great Pacific Garbage Patch and hopes to clean it of all plastic in just five years.

CLASSROOM ACTIVITIES
1. Our Plastic Shame.
This article has three sections, with three different aspects of an issue. What is the overall issue? How are the sections of the article related?

How did the whale die?

List three things that shocked you when reading this article.

Draw a picture of what you imagine the ‘Great Pacific Garbage Patch’ looks like.

How has Boyan Slat helped with this issue? Why did he create it?

Draw a picture of what his invention may look like.

List three emotions that you felt while reading this article. Explain why you felt these emotions.

What can you do to help with this issue?

What impact would this have on the environment?

2. Sperm Whales
Use information from the article and from further research to create a fact file about sperm whales.

Include the following information;

Scientific name, physical features, diet, habitat/distribution, life cycle, social behaviour, and any other information you find interesting. Also include a picture or diagram of a Sperm whale.

Extension
You can either…

a. Create a slide show presentation about sperm whales, using information from your fact file. Include pictures, graphics and animations to make your slide show interesting.

b. Create a slide show presentation about ‘Plastics in our ocean’. Outline how much plastic is in the ocean, how it gets there, what problems it causes and what can be done to prevent/clean-up this problem. Use graphics, sounds and animations to highlight important points. Include pictures if possible.

Extra Resources: Access to internet or school library for information about Sperm whales. Access to PowerPoint, Google slides, or other slide show software.