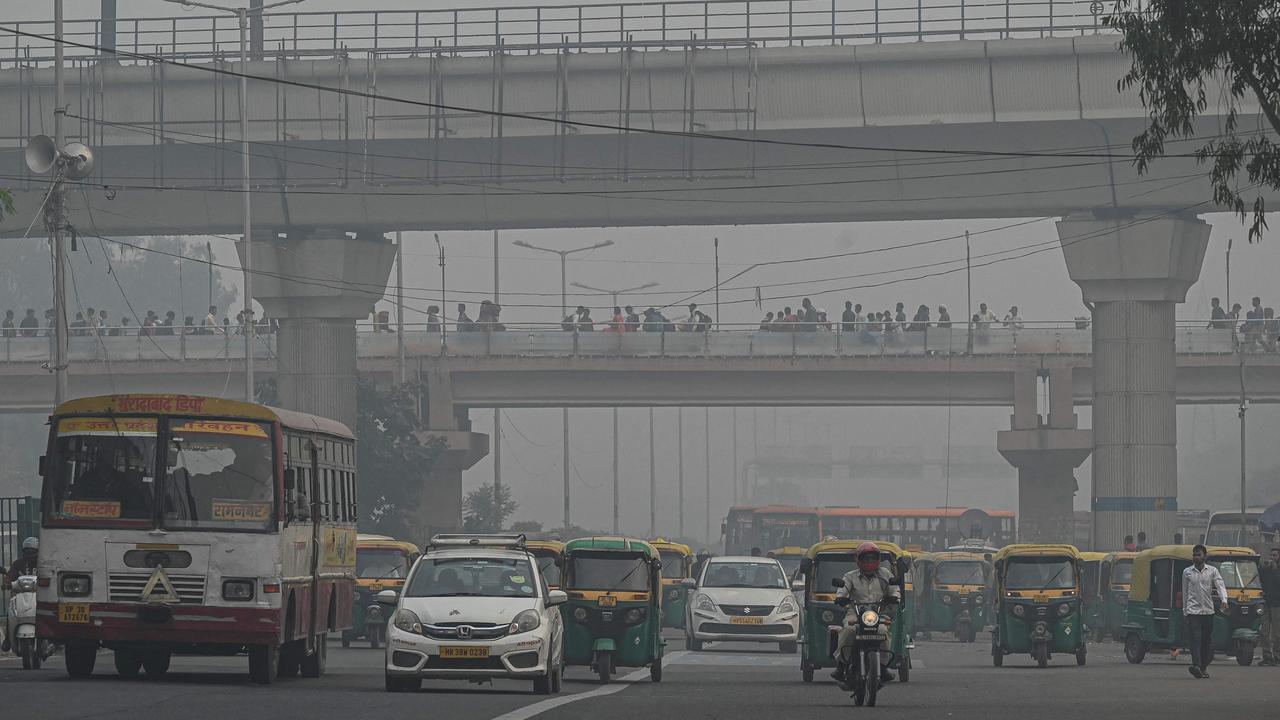 Commuters make their way along a street in smoggy conditions in New Delhi. Picture: AFP

India’s capital, New Delhi, has shut schools and coal-burning power plants as it battles dangerous levels of air pollution in the region.

Air quality has worsened across northern India and neighbouring parts of Pakistan in recent years, as industrial pollutants* and smoke from seasonal crop burn-offs combine into toxic* smog.

Colder temperatures and light winds at this time of year trap the smog over the city.

New Delhi is consistently ranked one of the world’s worst capitals for air quality, with levels of pollutants last week reaching more than 30 times the maximum limit recommended by the World Health Organisation. 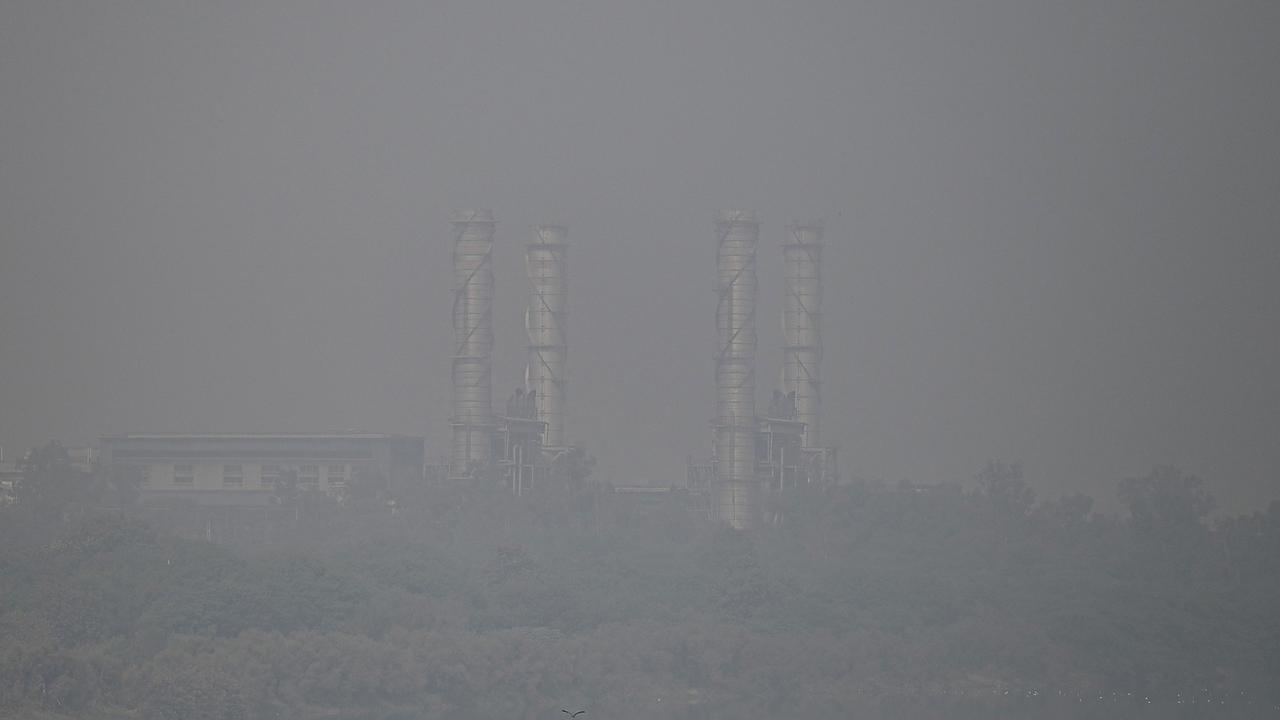 The city ordered the closure of six of the 11 coal-fired power plants surrounding the metropolis* on November 16. They will remain closed until the end of the month in a bid to tackle the filthy air.

The move comes after India moved to weaken anti-coal pledges* at the COP26 climate summit last week, with critics saying India was prioritising economic growth over the planet’s future.

The Indian capital of 20 million people has also cancelled school classes and urged people to work from home, while banning non-essential trucks from entering the city in an effort to clear the smog. 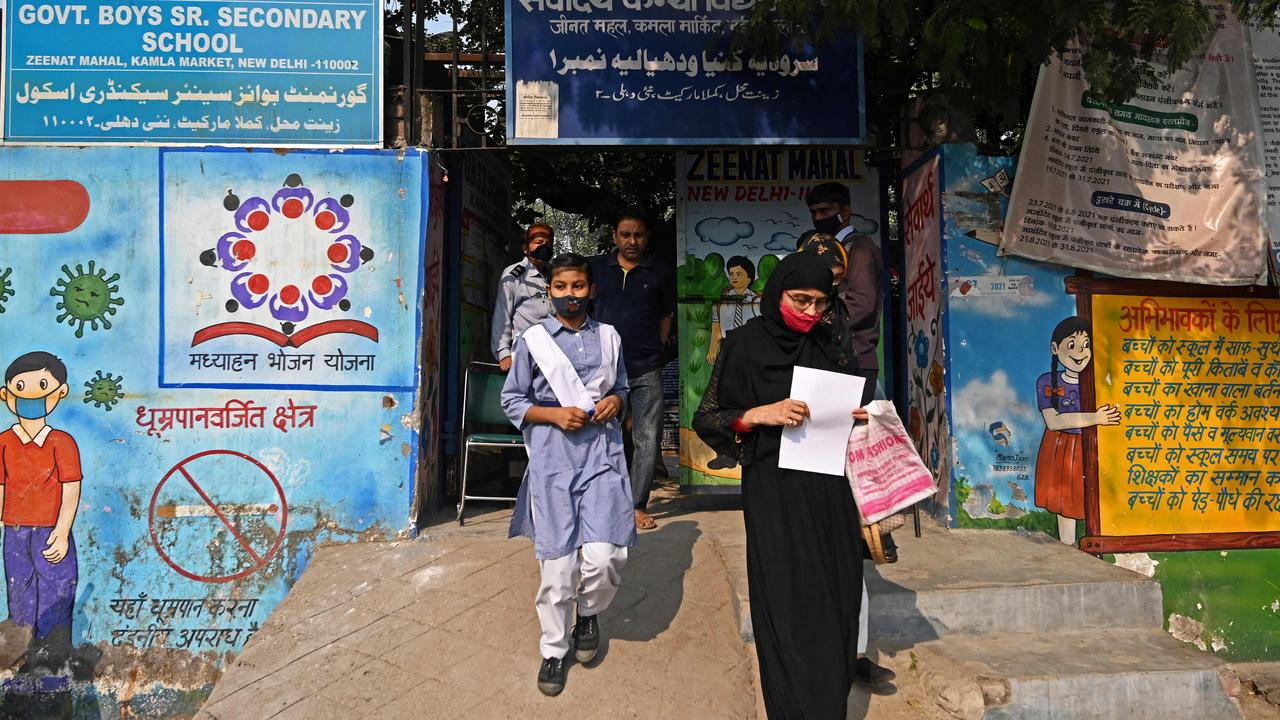 A student leaves his New Delhi school after authorities announced a shutdown to protect citizens from toxic smog. Picture: AFP

An order from the city’s Commission for Air Quality Management said all education institutions should remain shut until further notice.

“Anti-smog guns” – which spray mist into the air – and water sprinklers were ordered to operate at pollution hot spots at least three times a day.

The commission also said that at least half of government workers were being sent home and private firms should follow suit. 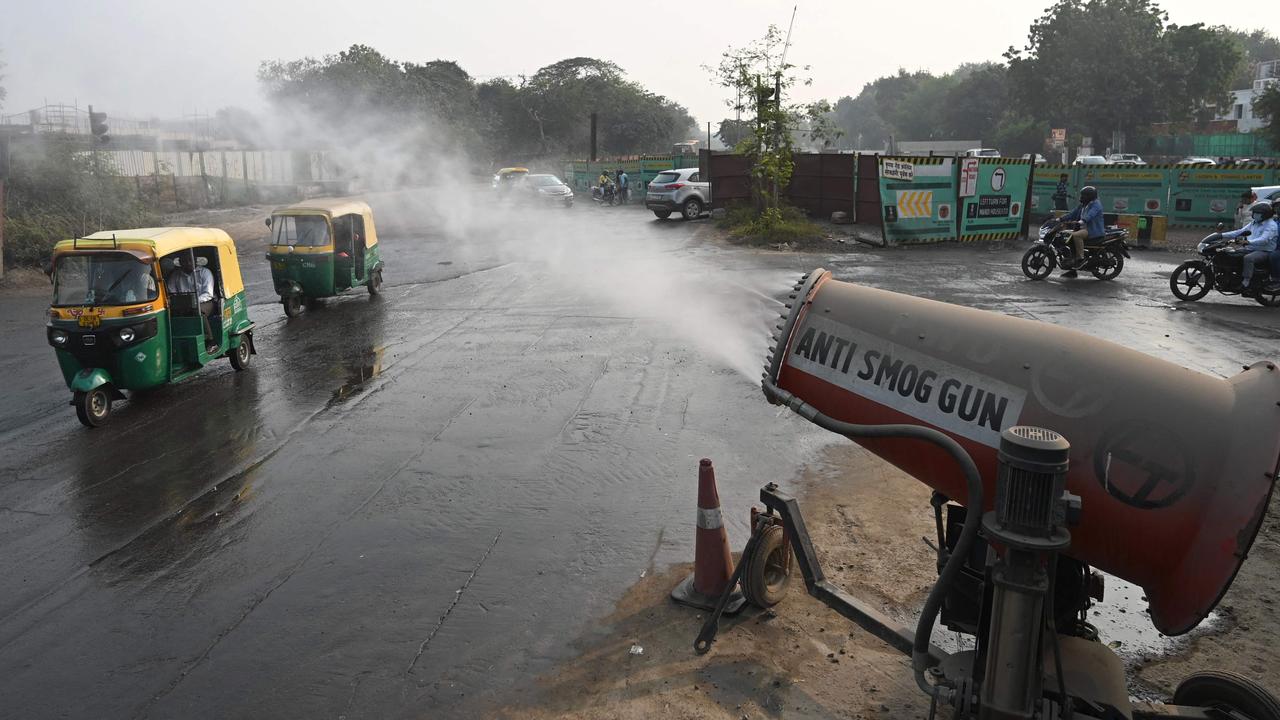 The orders came days after the Delhi government pushed back against a call by India’s Supreme Court to declare the city’s first “pollution lockdown”, which would restrict the population to their homes.

In neighbouring Pakistan, the city of Lahore near the border with India was ranked the most polluted city in the world on November 17 by a Swiss air quality monitor.

By evening the air above the city of 11 million had cleared slightly. But levels of PM2.5 – the smallest and most harmful particles polluting the air – were still at 118 micrograms per cubic metre, almost eight times the World Health Organisation’s daily recommended maximum. 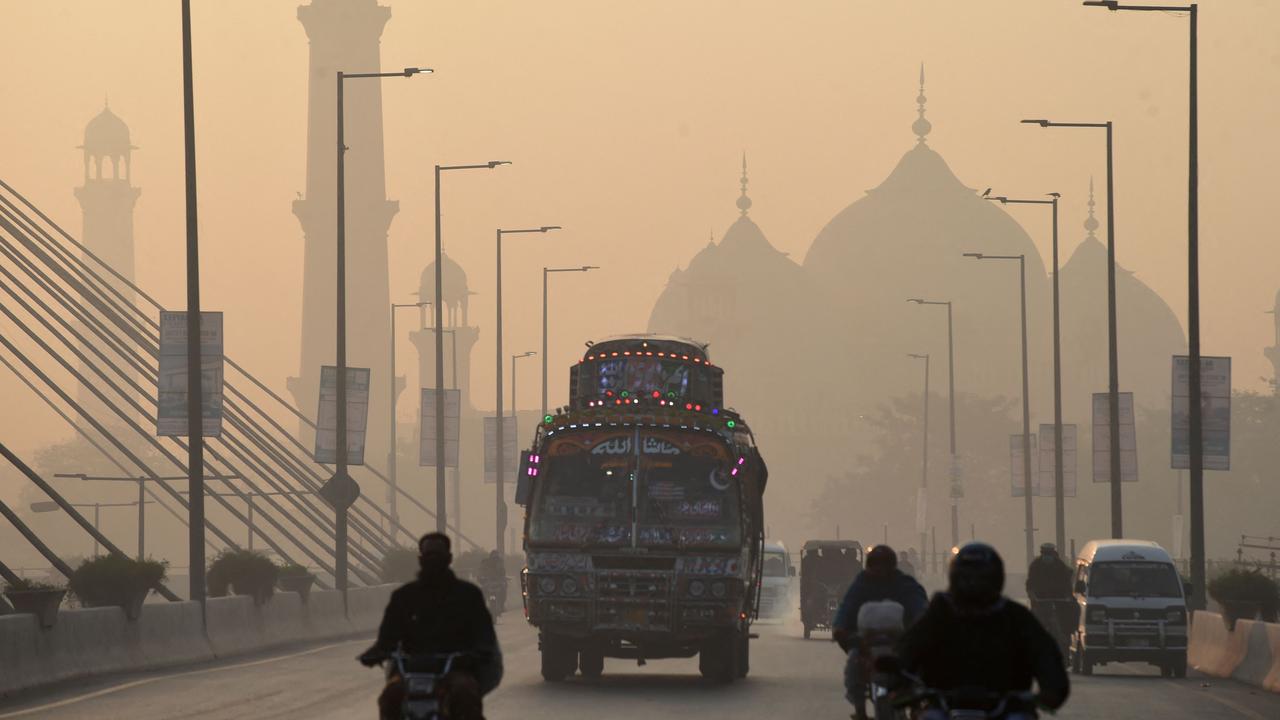 In recent years, Lahore residents have built their own purifiers* and taken legal action against government officials in desperate bids to clean the air.

But authorities have been slow to act, blaming the smog on India or claiming the figures are exaggerated.

“We are poor people, we can’t even afford a doctor’s charges,” shopkeeper Ikram Ahmed told AFP.

“We can only plead with them to control the pollution. I am not a literate* person, but I have read that Lahore has the worst air quality and then comes India’s Delhi. If it continues like this, we will die.” 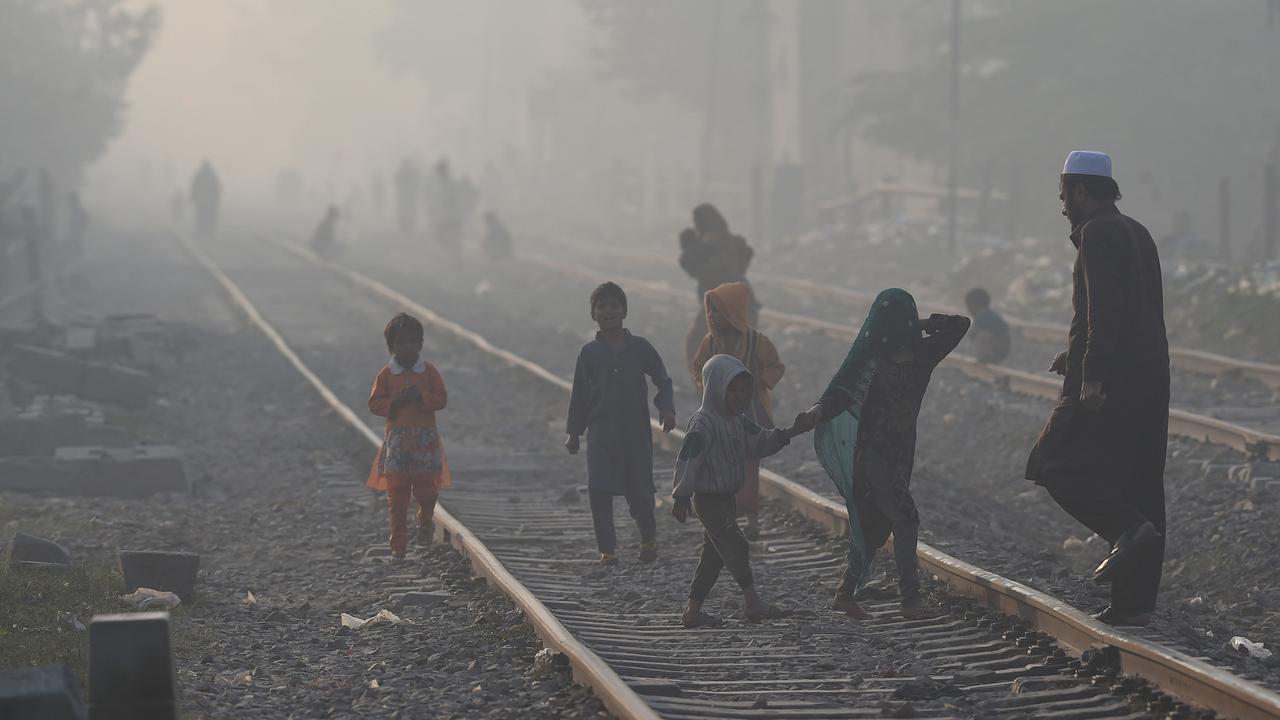 Children and adults walk on railway tracks in the smoggy conditions in Lahore. Picture: AFP

Labourer Mr Saeed said he had stopped taking his children outside for walks because of the dirty air.

“There are factories and small industries operating here. Either shift them somewhere else, give them compensation or provide them with modern technology, so we can get rid of this smog,” he said.

CLASSROOM ACTIVITIES
1. Write a List
What do you think the Indian government could do to stop the dangerous levels of pollution and improve the air quality in Delhi? Write a list of at least five actions that they could take. Next to each action, write sentences explaining how this action would help.

2. Extension
“Kids News should not run stories about air pollution in India and Pakistan. It doesn’t affect kids in Australia!” What do you think about this statement? Write your answer. Your answer must be a piece of persuasive writing. Your purpose is to convince your reader that your opinion is correct.

Search for all the adjectives you can find in the article Did you find any repeat adjectives or are they all different?