Taking your groceries home in plastic bags will soon be a thing of the past right across Australia.

This week, the Victorian Government announced it would ban single-use plastic bags “as soon as possible”. The move means every state and territory in Australia, except NSW, has banned or promised to ban lightweight plastic bags.

It is hoped the phasing out* of lightweight bags will reduce waste and litter and help protect marine life in the state.

Major supermarkets — Coles, Woolworths and IGA — have already announced they will phase out single use plastic bags over the next 12 months. We will all be using reusable shopping bags soon. Picture: Jake Nowakowski

A single-use bag is defined as one that consumers use to carry goods home from a shop. The grey and white bags at supermarkets are all single-use bags.

The Victorian policy will be introduced after consultation* with community and business groups, and will not include the small, thin bags used to carry meat and fruit and vegetables. The new ban will not include the thin bags for fruit and vegetables like these. Picture: AAP

South Australia was the first to phase single-use bags out in 2009. ACT and the Northern Territory followed suit in 2011. Tasmania banned them in 2013. Queensland and Western Australia have announced they will ban them from next year.

Victoria’s Energy, Environment and Climate Change Minister Lily D’Ambrosio said: “We will work closely with Victorian communities and businesses to design the ban, we’re proud that we’re doing our bit to reduce the impact plastic bags have on our environment.”

But not all Victorias are happy, with some saying reusable bags are costly and inconvenient and that they rely on plastic bags.

“Reusable bags are quite big and bulky which makes it hard for me because I mostly use public transport,” she said.

However others have welcomed the decision, hailing* it as a step in the right direction for the environment. 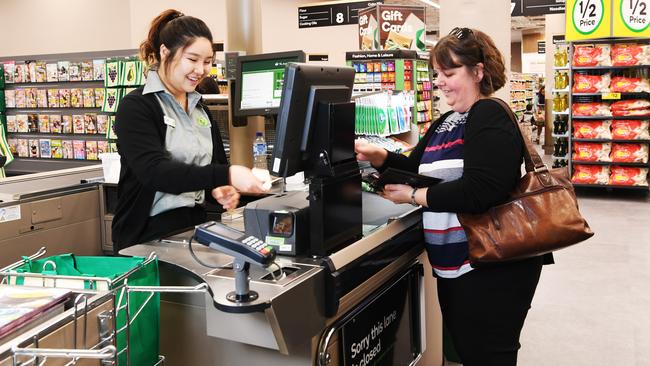 “Plastic bags aren’t biodegradable*. We need to protect the environment we live in.” Olivia Montgomery, 28, from Melbourne’s Frankston South, said: “The ban is good. People use them once and then get rid of them.”

“Hopefully Gladys Berejiklian will be convinced to do what NSW does so well: follow Victoria’s lead,” he said.

A spokesman for the Victorian Government said plastics in the environment break up into smaller and smaller pieces over time, becoming increasingly difficult to manage.

“They can end up in our waterways, lakes and oceans — contributing to litter and posing a significant hazard to our marine life,” he said.

Plastic bags have already been banned in many major cities across the US, Europe, Asia and South America. CLASSROOM ACTIVITIES
1. What does it mean?
In the story you have read that the Victorian Government will work with businesses and communities to design the ban.
What do you think this means?

Extension: Why would some people be against banning plastic bags?
List as many problems that the ban might cause as you can think of.
For each problem, write a solution.

2. Create a poster
Design a poster to help people in your community learn about the phasing out of plastic bags.

Extension: Design another poster.
This poster will help people to learn about alternatives to using lightweight plastic shopping bags.

VCOP ACTIVITY
Narrative writing
It’s the year 2058. Beaches are covered in rubbish. Surfers have needed to modify their surfboards to surf along waves thick with junk. Animals are dying in the ocean from eating plastic and the whole environment is in danger. But then you stumble upon a magic lamp. There is a magic genie inside who grants you the power to save the environment and fix our worlds rubbish problem

Try to start and finish a piece of writing in 40 minutes.
Answer the questions above by writing the answers down or by talking with a friend.

GIANT HOLE OPENS UP IN ANTARCTICA