Australia is burying 67 million tonnes of rubbish ever year. This is one day's worth of rubbish received by the Townsville City Council recycling facility in Qld that had been incorrectly placed in yellow bins.

Australia is burying 67 million tonnes of garbage every year, with recycling rates declining in some categories, a new report has found.

The report by the Australian Academy of Technology and Engineering (ATSE), out on Wednesday, shows we annually discard 2700kg of waste for each person in Australia – that’s more than 30 times the average Australian body weight.

While building materials represented the biggest waste stream by volume, as a category it had a recycling rate of 72 per cent – compared to 60 per cent for paper and cardboard, 57 per cent for glass and 52 per cent for organics*.

Less than 50 per cent of plastics are currently being recycled, the report found, while the proportion of car tyres being recovered had fallen from 16 per cent a decade ago to just five per cent in recent years.

Treasurer Josh Frydenberg announced a ban on the export of several categories of waste, including plastic, paper, tyres and glass, in last month’s Budget – putting immediate pressure on Australia’s waste industries to develop their capacity. 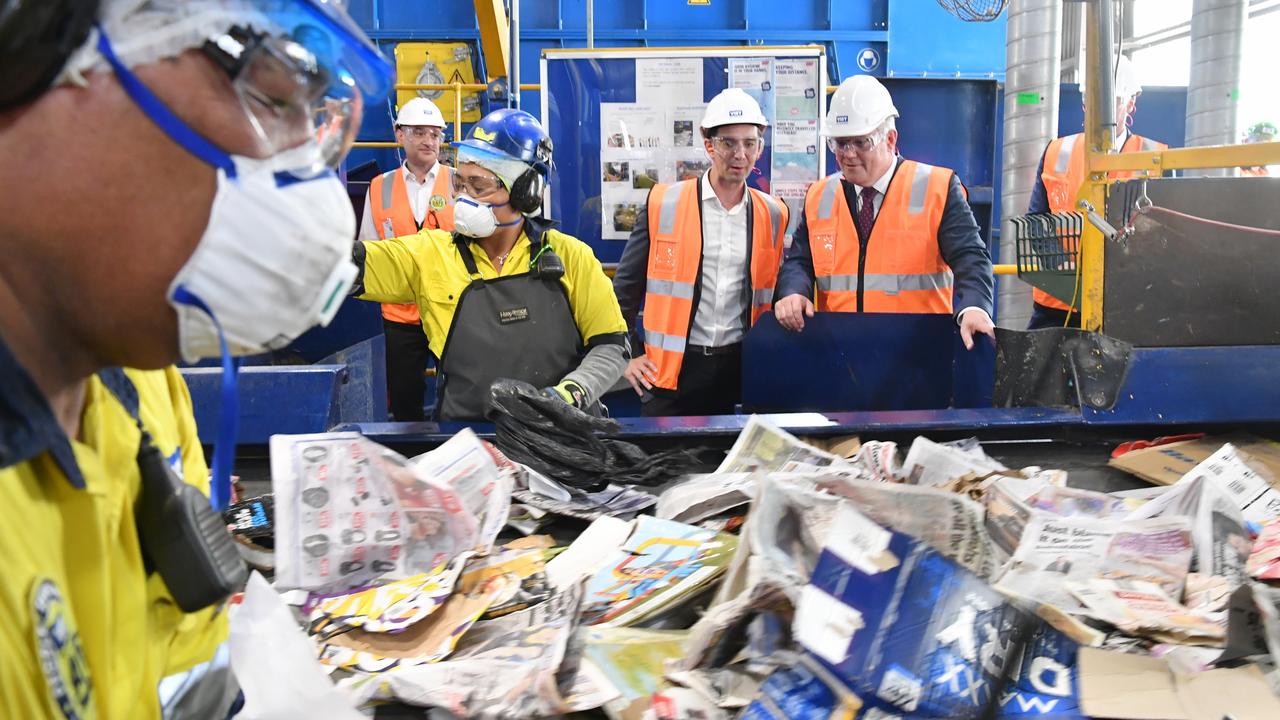 Assistant Minister for Waste Reduction and Environmental Management, Trevor Evans (centre) and Australian Prime Minister Scott Morrison (right) during a tour of the Visy Recycling Facility in Brisbane, Qld on October 12, 2020. Mr Morrison announced in the budget that recycling will get a $250 million boost in a plan to stop more than 600,000 tonnes of waste ending up in landfill. Picture: AAP Image/Darren England via NCA NewsWire

Textor Technologies founder Phillip Butler said Australia’s overall recycling rate of 58 per cent was “nowhere near world’s best practice”, but the challenge of reducing our waste was a holistic* one, involving government, manufacturers, retailers, distributors and consumers, as well as the resources and recovery sector.

Prof Veena Shajwalla, Director of the SMaRT (Sustainable Materials Research & Technology) Centre at the University of NSW, said research suggested consumers wanted to see the benefits of their recycling efforts.

A recent poll of 2100 people conducted by UNSW found that “people do want to play a part … (but they) want to know where their effort is going and if that effort is resulting in benefits,” she said.

“Most people said they were putting in a lot of effort but it wasn’t resulting in something meaningful,” she said.

The ATSE report found that as of 2018, only 10 local government areas in Australia had kerbside collections that could accept all types of recyclable plastics, including plastic bags. 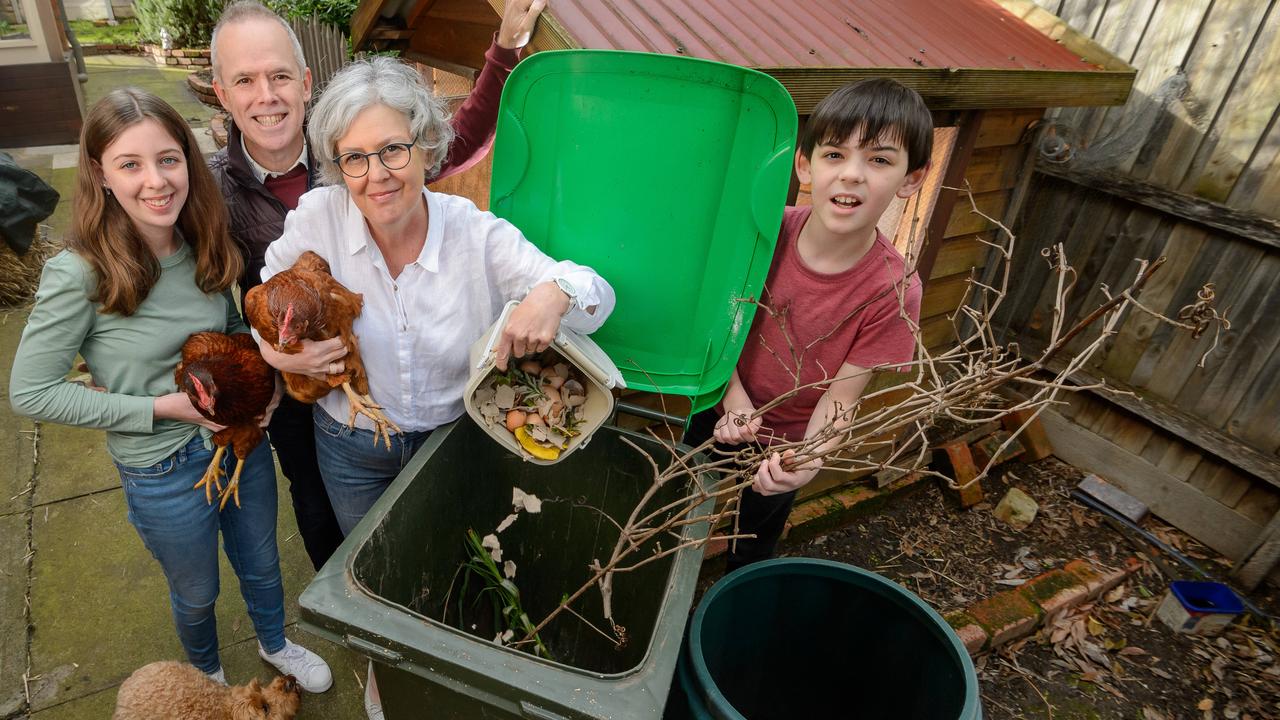 Cate Barry and Brendan, Rachael and Benjamin Baker live in Boroondara Council in Victoria, which has had great success diverting rubbish from landfill with a food/organics bin service. Picture Jay Town

Associate Professor Damien Giurco, Deputy Director at the Institute for Sustainable Futures at Sydney’s University of Technology, said the report “sets out not only the challenge but also the opportunities for Australia”.

He said manufacturers would increasingly be asked to embrace the concept of “product stewardship*”.

“This means those producing products plan ahead to think about the environmental, social and economic impacts of all the products we use in daily life,” he said.

“We should be designing products from the start so that they have a long and productive first life, and can then be re-used, repaired, or made into something else once they reach the end of that first life,” she said.

“Moving to a more circular economy would have enormous benefits – not just for the environment but also for jobs creation,” Ms Walker said.

Why we need to talk about waste and recycling

Learn the three Rs for a simple waste solution

CLASSROOM ACTIVITIES
1. Solve the Problem
What do you think could be done to encourage people to recycle more? Write a list of at least five things or actions that our governments, businesses and other people or groups in our community could do that would help Australia become one of the top recycling countries in the world. Next to each action, write sentences explaining why you think that this would help.

2. Extension
What do you think stops us from being better at recycling? Design a mind map or diagram that shows the reasons why our recycling rates are low. Use the information in the story and your own ideas.

HAVE YOUR SAY: How could you reduce the waste from your household?
No one-word answers. Use full sentences to explain your thinking. No comments will be published until approved by editors.