Remote Cocos Islands polluted by much more plastic than expected The world may be seriously underestimating* the amount of plastic waste along its coastlines, according to researchers who studied Australia’s Cocos Islands.

And they believe the plastic seen on the surface of the Cocos Island beaches and on beaches around the world may just be the tip of the iceberg*.

Cocos Islands is a group of 27 small atolls* 2100km west of the Australian mainland in the Indian Ocean.

The study’s lead scientist Jennifer Lavers said it was what they found when they dug below the surface that most shocked them.

“I’ve been working on remote islands as a marine biologist* for 15 years or so and all of them have at least some debris*, so I’ve come to expect it,” said Dr Lavers, who is from the University of Tasmania.

“One of the big surprises was that when I was digging down in the sediment* to look at how much was buried and where, the quantity sometimes did not drop off with depth.”

Dr Lavers and the team dug holes across beaches on the Cocos Islands and found plastics, mainly in the form of small or microparticles*, throughout the sand layers.

They estimated the true amount of plastic pollution on the beaches surveyed may be as much as 26 times greater than the small pieces on the surface. 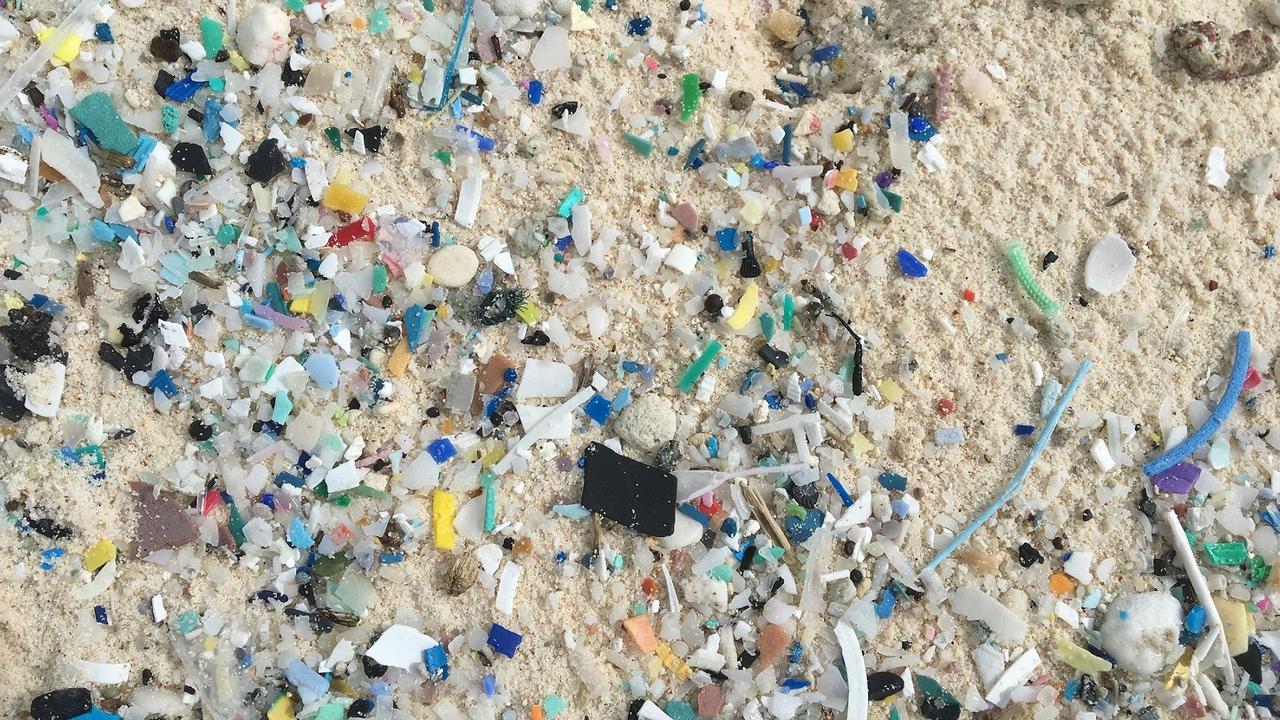 Researchers found that the concentration of plastic in the sand didn’t decrease even when they dug deep into the sand. Picture: Jennifer Lavers/University of Tasmania/AFP

The study, published in the journal Nature Scientific Reports, concludes that global plastic waste surveys “have drastically* underestimated the scale of debris accumulation*”.

The scale of plastic production has exploded worldwide in recent years. Half of all the plastic ever made was made in the past 13 years.

Humans throw millions of tonnes of plastic into the sea every year, and much of it gets washed back ashore onto beaches where it poses a risk to wildlife.

It can also enter the foodchain in the form of microplastics, which have been found at all ocean depths and locations.

Dr Lavers said that though we have heard a lot about the big ocean garbage patches recently, such high plastic concentrations found on a remote group of islands was deeply concerning.

“While the five oceanic* gyres* or ‘garbage patches’ tend to garner* a lot of research and media attention, the Cocos Islands are not located near or within one of these gyres,” she said.

“Plastic is everywhere, in all corners of the ocean, being distributed by current* systems big and small.” 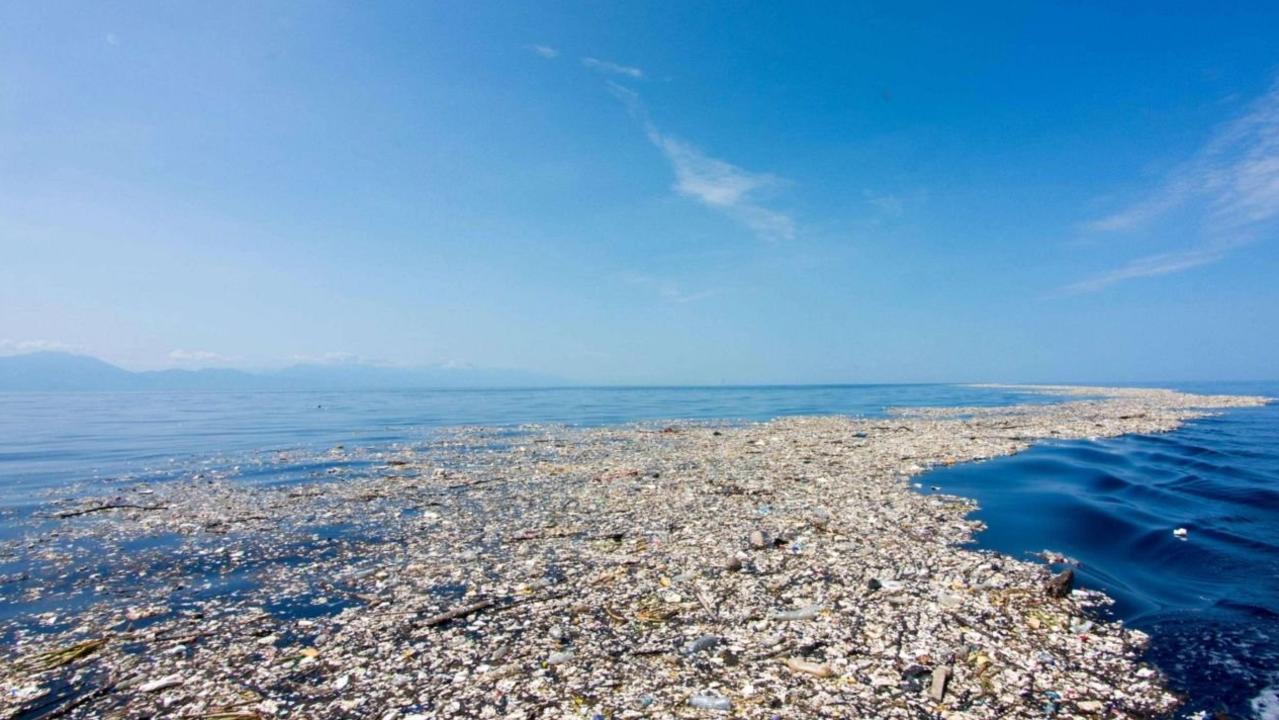 The team estimated that as much as 25 per cent of the plastic items surveyed on Cocos were disposable or “single-use”, such as food packaging, straws, forks and knives and toothbrushes.

Dr Lavers said there needs to be changes in behaviour all over the world, from production to use to re-use to begin to deal with our plastic waste problem.

“Some islands have significant quantities to the point that it forces one to pause and consider all aspects of their life, from the simple items used each day (for example, to brush one’s teeth) to how I communicate the outputs* of my research,” she said.

“These islands change you.”

VIDEO: Cocos Islands are considered a paradise. They are very remote and a long way from any of the ocean garbage patches, yet researchers found much more plastic than they expected, even all the way down through the sand.

Your big ideas on recycling could save the world

CLASSROOM ACTIVITIES
1. Pause and consider plastic in your life.
“Some islands have significant quantities to the point that it forces one to pause and consider all aspects of their life, from the simple items used each day (for example, to brush one’s teeth) to how I communicate the outputs* of my research.”

The plastic situation on the Cocos Islands is probably true in many other places too. It is deeply concerning how much plastic we use in our lives. Many of us have begun to be more plastic aware and try to reduce our use of ‘single-use’ plastic. But we are probably using plastic in areas of our life we are not even thinking of.

In your mind, go through all aspects of your typical daily life. Begin with when you get out of bed in the morning and finish as you return to bed in the evening.

In a chart, list every plastic item that is used. In the second column, mark next to each item if it is ‘single use’. For example, the plastic bag that holds cereal inside the box is usually thrown away once it is finished, as is your toothbrush (single use). In another column write down if there is another option you could use instead of plastic for this product. (Bamboo toothbrush perhaps? paper straws?) If there is not another option that you are aware of use the internet to see if you can find any. The other option might be to make your own of that product (for example toothpaste packaging is plastic – maybe you could try finding a recipe to make your own toothpaste so you don’t need to buy the toothpaste in plastic packaging?)

2. Extension
Look through your list above. Choose three plastic items you would like to eliminate from your daily life. How do you plan to do this?

You might need to convince parents or carers or teachers to help you. Write them a short letter explaining why you would like to stop using these plastics in your life, what other option you could try instead and what the benefits are to you and to the environment. Are there any disadvantages with this change? For example, does it cost more, or take more time? Is it still worth the change? Include these points in your letter.

VCOP ACTIVITY
Recycle and reuse
It’s time to do our part for the environment and recycle, but we are going to try and be a little different in getting our message across. Instead of recycling physical waste, I want you to recycle and reuse vocabulary and facts from the article to create a positive and powerful message about pollution.

You can present the message as a poster, an article, or turn it into an radio or TV ad.

Remember to use your VCOP skills to bring all the information together to really express your message.

HAVE YOUR SAY: Have you changed the way you use plastic this year? What have you changed? What do you plan to do differently in the future?
No one-word answers. Use full sentences to explain your thinking. No comments will be published until approved by editors.