Bits of plastic have been found in the faeces* of people in Europe, Russia and Japan, according to research claiming to show for the first time the widespread presence of plastics in the human food chain*.

All eight volunteers in a small study were found to have several types of plastic in their poo, with an average of 20 micro-particles* per 10 grams of stool*, researchers reported at a gastroenterology* conference in Vienna.

The scientists suggested that the tiny specks — ranging in size from 50 to 500 micrometres* — may been taken in via seafood, food wrapping, dust or plastic bottles. 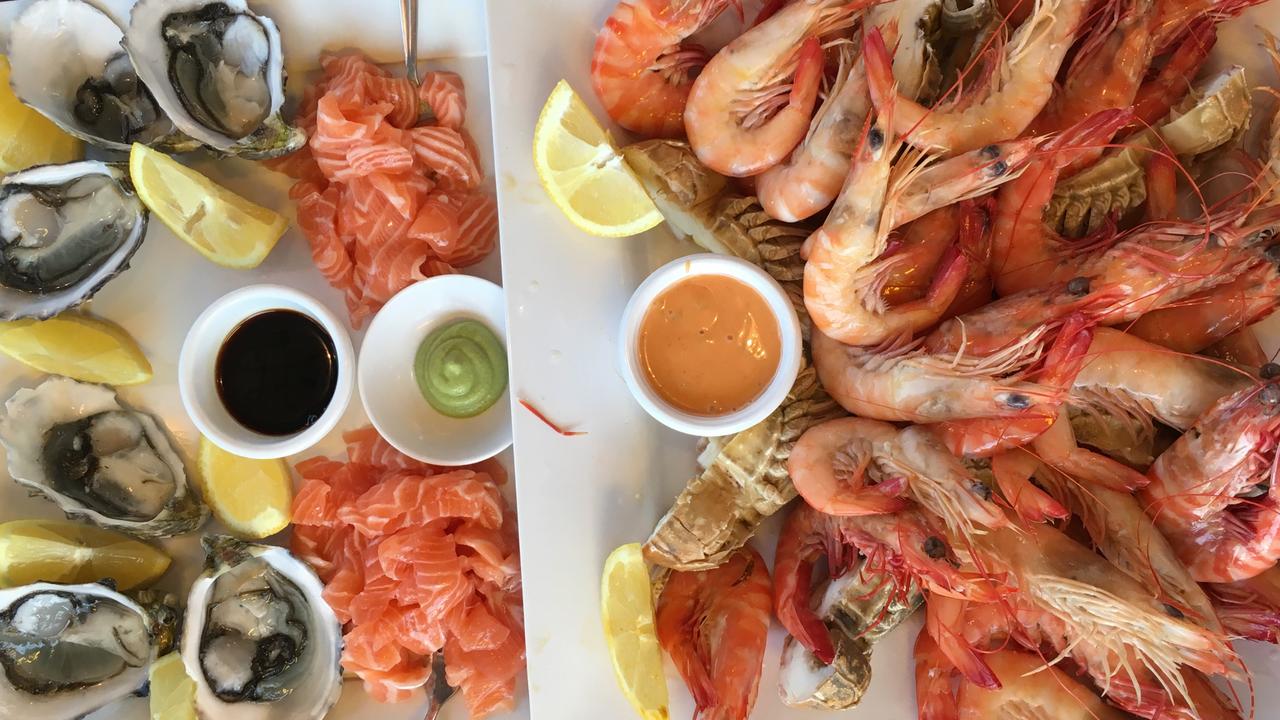 In comparison, a human hair is roughly 50 to 100 micrometres in width.

“In our laboratory, we were able to detect nine different types of plastics,” said Bettina Liebmann, a researcher at the Federal Environment Agency in Germany, which studied the samples.

The two most common were polypropylene (PP) — found in bottle lids, rope and strapping — and polythene terephthalate (PET), present in drinking bottles and textile fibres.

Together with polystyrene (utensils, cups, coolers) and polythene (plastic bags), they accounted for more than 95 per cent of the particles detected. 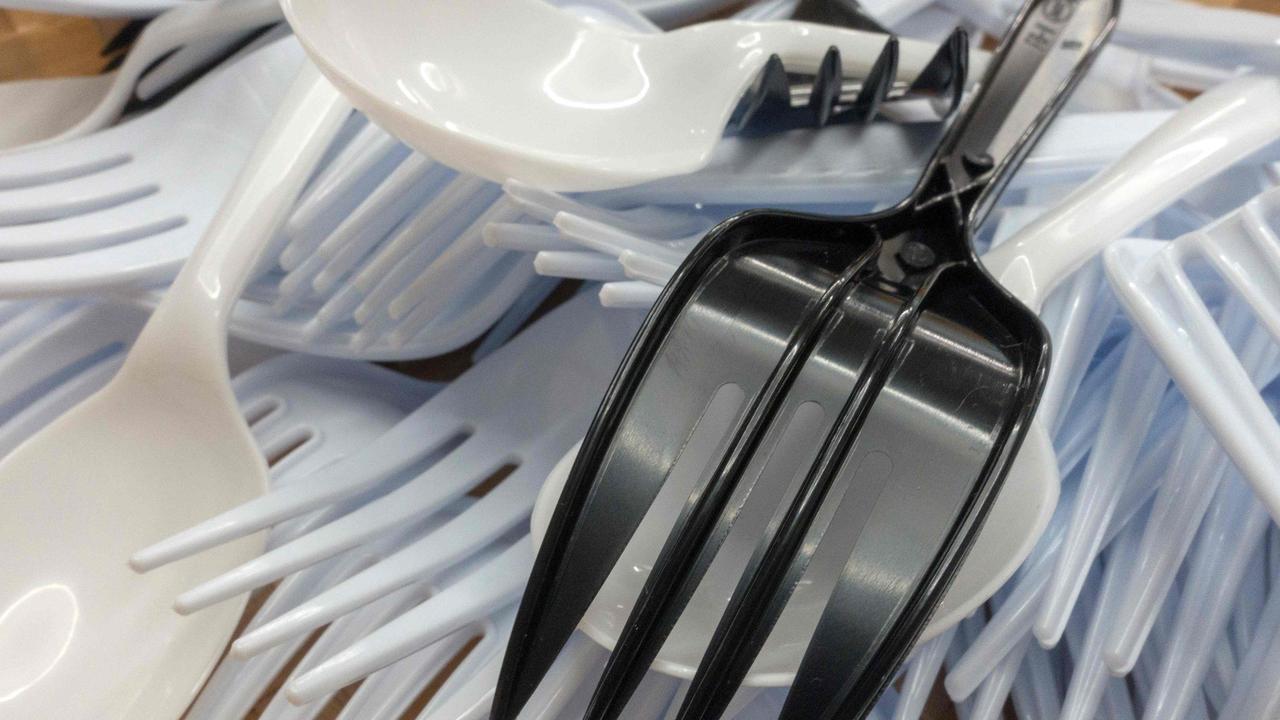 There are many ways our food comes into contact with plastics, including utensils, food wrap and containers. Pictures: AFP

The researchers explained that this study only found the plastic and identified it, but could not say for sure how the plastic came to be in these people.

“We were unable to establish a reliable connection between nutritional behaviour* and exposure to microplastics,” said lead author Philipp Schwabl, a researcher at the Medical University of Vienna, Austria.

In earlier studies on animals, the highest concentrations of microplastics were found in the stomach and intestines, but smaller amounts have also been detected in blood, lymph* and the liver.

“There are initial indications that microplastics can damage the gastrointestinal tract* by promoting inflammatory* reactions or absorbing harmful substances,” Mr Schwabl said.

Each kept a week-long diary of what they ate, and then provided a stool sample. All consumed foods wrapped in plastic and beverages in plastic bottles, and six ate seafood. None were vegetarians. Micro-plastics have been found in bottled water, but this particular study couldn’t tell us whether it is dangerous to our health to be drinking water with plastic in it. Picture: AFP

HEALTH IMPACTS UNKNOWN
Scientists not involved in the study said it was too limited in scope to draw any firm conclusions, especially about health impacts.

“I’m not at all surprised, or particularly worried by these findings,” commented Alistair Boxall, a professor in environmental science at the University of York in the UK.

“Microplastics have been found in tap water, bottled water, fish and mussel* tissue, and even in beer,” he added. “It is therefore inevitable that at least some of these things will get into our lungs and digestive system.”

Much more research is needed, he said, before we can know where plastics found in the gut came from, and especially whether they are harmful.

For Stephanie Wright, a researcher at King’s College London, the real question is whether plastics are accumulating* in the human body.

“What is unknown is whether the concentration of plastic being ingested is higher than that coming out, due to particles crossing the gut wall,” she said. “There is no published evidence to indicate what the health effects might be.” A rubbish-filled creek in Manila, Philippines. Many millions of tonnes of plastic waste are dumped or flow into the ocean every year and some of this ends up in the food we eat. Picture: AFP

Global plastic production has grown rapidly, and is currently more than 400 million tonnes a year.

It is estimated that two to five per cent of plastics wind up in the ocean, where much of it breaks down into tiny particles.

This is a news report about a different study, which found microplastics in bottled water

New Pooseum teaches us about poop

CLASSROOM ACTIVITY
1. Key questions
Although scientists have commented this study is “too limited in scope to draw any firm conclusions”, it does raise some very important questions that could be researched further.

After reading the article, write down a list of questions you now have about plastics in the human food chain.

Choose one of these questions and suggest why you would like it researched and a possible way that further study could be done. When suggesting a way to study, (how, who, how many subjects etc) remember you will likely need human subjects to agree to these tests so they need to be safe and not too intrusive. Think about how you can make the study more reliable than the one in the article so that scientists respect the findings.

2. Extension: Given that plastic is a human-made product and not naturally occurring, there is a fair chance that having it in our food chain could have an impact on our health. What can we do reduce the likelihood of having plastic particles in our food? Write a list steps you can take. How many of these steps will also reduce plastic waste in our oceans and other environments?

HAVE YOUR SAY: What’s at least one thing you and your family could do right now to reduce the amount of plastic you use? Use full sentences to explain your thinking. No one-word answers.