Noisy roads near schools might slow memory development in kids New European research suggests road traffic noise near schools may have an impact on children’s ability to pay attention and remember in class. Picture: John Appleyard

Noisy roads near schools could make it harder for kids to learn, new research shows.

Spanish and Dutch researchers said that being exposed* to road traffic noise at school might be causing children to have issues with attention and memory. With both functions crucial* for learning, the findings could have implications* for environmental noise policies to better protect schools. It is possible the findings will have implications for noise policies to better protect school environments. Wilandra Rise Primary School in Victoria, pictured in 2019, is one of thousands of schools in Australia to experience traffic noise and chaos around pick-up and drop-off. Picture: Penny Stephens

The research team measured road noise changes and intensity in classrooms at 38 schools, and asked the children to sit four computerised cognitive* tests over a year to assess the development of their working memory, complex working memory and attentiveness. Published 2 June in the journal PLOS Medicine, the results showed that kids exposed to higher intensity and changing traffic noise outside the school tended to have slower development of working and complex working memory and attention over 12 months, compared to kids attending quieter schools.

Inside the classroom, the impact to all development measures was more evident after exposure to fluctuating noise rather than for intensity levels. No associations were found after exposure to road traffic noise at home. Kids exposed to higher intensity and changing traffic noise outside the school tended to have slower development of working and complex working memory and attention over 12 months, compared to kids attending quieter schools. Picture: file image

Spain’s Barcelona Institute for Global Health Assistant Research Professor Maria Foraster and colleagues studied a sample of 2680 children aged seven to 10 years at 38 schools in Barcelona between January 2012 and March 2013. The researchers measured markers of annual exposure to intense and changing road traffic noise both inside and outside the schools at the beginning of the year and estimated exposure at home using Barcelona’s road traffic noise map for 2012. The study also controlled for traffic-related air pollution levels, demographics* and other factors. 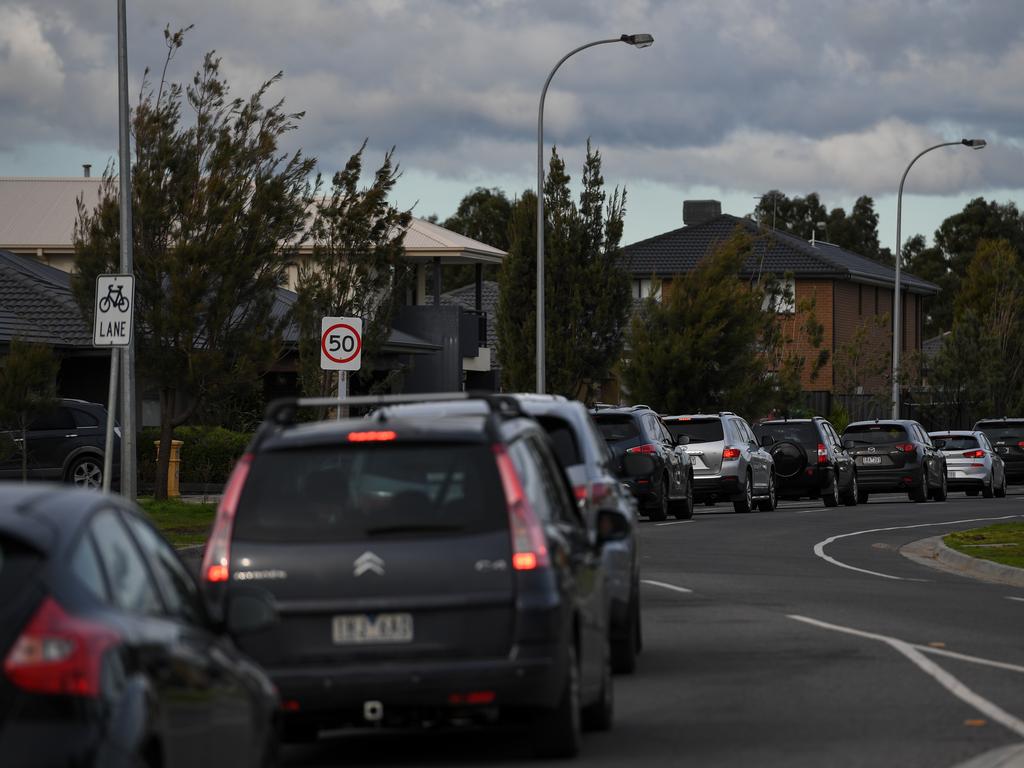 Traffic noise is the most common environmental noise source in Europe. Being a nation of committed car users, Australia knows a thing or two about road noise too. Picture: Penny Stephens

The team did not measure historic noise exposure, which could affect the test scores. However, the authors reported that 98 per cent of the children had attended the same school at least for one year and that noise levels are generally steady over time. The findings have public health relevance* given the number of children around the world who are exposed to road traffic noise in schools, but researchers said similar testing should be done elsewhere before the findings could be generalised across other populations. The Spanish and Dutch researchers said similar testing should be done elsewhere before the findings could be generalised across other populations. Traffic pictured outside Roxburgh Park Primary School in Victoria reflects a common issue with traffic noise and congestion. Picture: file

Traffic noise is the most common environmental noise source in Europe and the second most damaging environmental factor for poor health in Europe after air pollution. While an increasing number of studies look at the health impacts of transport noise in adults, little is known about the effects in children.

CLASSROOM ACTIVITIES
1. Noise in the classroom
Think about your school and the type of outside noise and activities that may affect students in a classroom. List these below:

Do the noises change in intensity or are they fairly consistent?

Is there anything you could do to lessen this noise?

Would this make you think twice about which school you should attend?

Think about:
What is the main topic or idea?

What is an important or interesting fact?

Who was involved (people or places)?