Professor Peter Harrison inspects coral IVF colonies at Heron Island lagoon in December 2020. His team is delighted by the success of the pilot program, which has seen the corals mature in time for the annual mass spawning event.

Researchers have found that 22 large coral colonies* born through the first coral IVF trial on the reef in 2016 have grown to maturity – and were filled with eggs and sperm* ready to spawn after the last full moon.

The November coral spawning, one of the world’s most mesmerising* natural events, was praised by scientists as being one of the best in years. 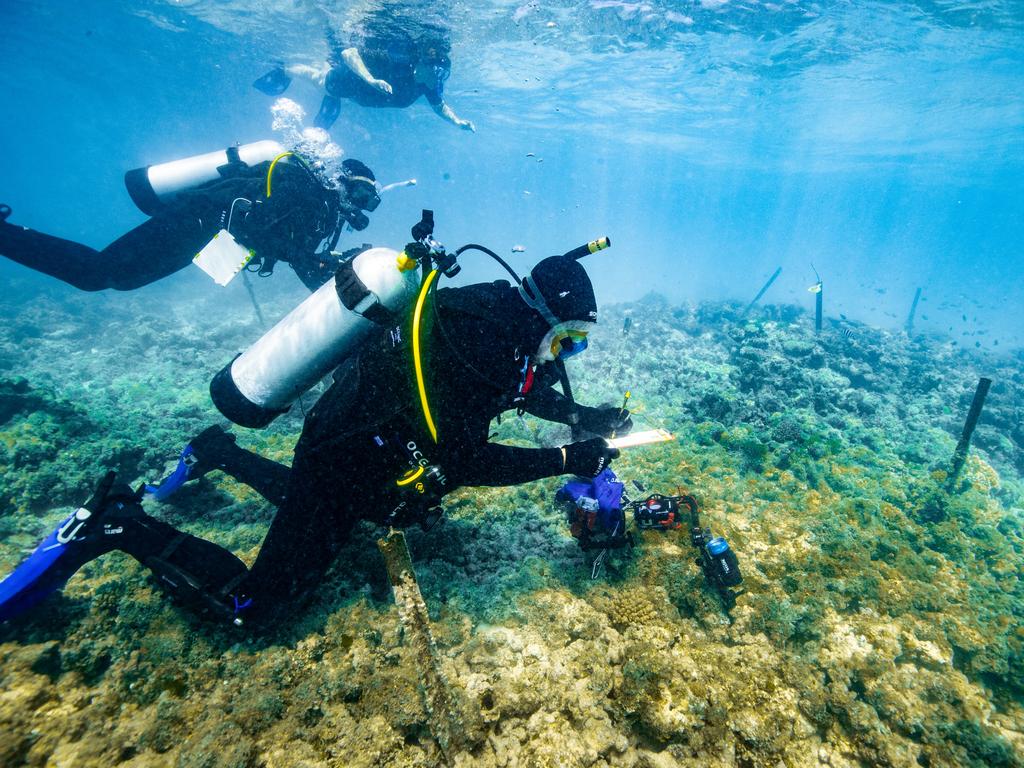 Corals from the first IVF trial on the reef in 2016 – pictured being inspected by Professor Harrison’s research team in December 2020 – have now grown to maturity.

The discovery has delighted researchers and given fresh hope that parts of the reef badly damaged by coral bleaching*, cyclones or climate change can be restored.

“These coral babies have grown from microscopic larvae* to the size of dinner plates, having not only survived a bleaching event but are now reproducing themselves – helping to produce larvae that can restore a degraded* reef,” she said.

“Saving the reef is a huge task, but having proof that this innovative*, cutting-edge science works gives us hope.” Lead Researcher and Southern Cross University Distinguished Professor Peter Harrison said it was the first project of its kind to re-establish coral on damaged reefs by collecting millions of coral eggs and sperm during the spawning season and later releasing them directly onto degraded areas of the reef.

“The ultimate aim of this process is to produce new breeding populations of corals in areas of the reef that no longer have enough live corals present due to being damaged by the effects of climate change,” he said.

“This is a thrilling result, to see these colonies we settled during the first small-scale pilot study on Heron Island grow over five years and become sexually reproductive.”

CLASSROOM ACTIVITIES
1. Name the babies
Think of perfect names for five of the new coral babies. The names have to be very special and say something about the amazing story behind their spawning. Next to each name, write the reasons why you chose that name.

2. Extension
How has science given fresh hope for the reef? Write an explanation of the steps that have led to the spectacular spawning event.

Have you outdone yourself and used some really great vocabulary throughout your writing? First, well done. Second, let’s ensure everyone can understand it by adding a glossary of terms. Pick three of your wow words and create a glossary for each word to explain what it means.