Iceland has held a funeral for a glacier.

With poetry, moments of silence and political speeches about the urgent need to fight climate change, Iceland’s prime minister, activists*, scientists and others bade* goodbye to what once was a glacier.

But on Sunday he brought a death certificate* to the memorial* service. After about 100 people made a two-hour hike up a volcano, children installed a memorial plaque to the glacier, now called just “Ok,” minus the Icelandic word “jokull”, for glacier.

“The symbolic death of a glacier is a warning to us, and we need action,” former Irish president and former United Nations human rights commissioner* Mary Robinson said.

This was Iceland’s first glacier to disappear. But Sigurdsson said all of the nation’s ice masses will be gone in 200 years.

“We see the consequences of the climate crisis,” Icelandic Prime Minister Katrín Jakobsdóttir said. “We have no time to lose.” People hold up signs calling for action on climate change where the glacier once was. Picture: AFP

Jakobsdottir said she will make climate change a priority when Nordic* leaders and German Chancellor Angela Merkel meet in Reykjavik on Tuesday.

“I know my grandchildren will ask me how this day was and why I didn’t do enough,” said Gunnhildur Hallgrimsdottir, 17. A monument is unveiled at site of Okjokull, Iceland’s first glacier lost to climate change in the west of Iceland on August 18, 2019. Picture: AFP

The plaque, which notes the level of heat-trapping carbon dioxide in the atmosphere measured last May, also bears a message in Icelandic and English, titled “A letter to the future”.

“Ok is the first Icelandic glacier to lose its status as a glacier.
In the next 200 years all our glaciers are expected to follow the same path.
This monument is to acknowledge that we know what is happening and what needs to be done.
Only you know if we did it.” 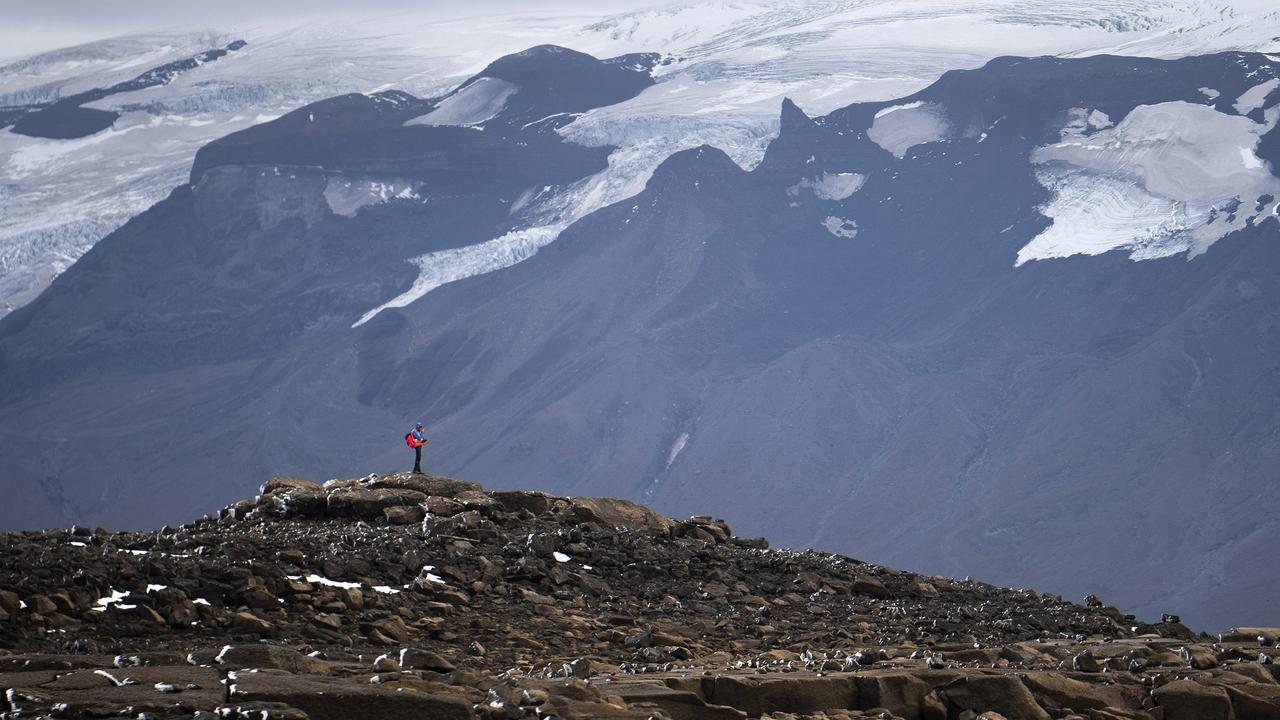 A man stops on his way to the top of what once was the Okjokull glacier but is now exposed rock. Picture: AP

HOT JULY
The ceremony for the glacier came only days after the announcement by scientists that July was the hottest month measured on Earth since records began in 1880.

It’s the latest in a series of peaks that scientists say backs up predictions for man-made climate change.

The previous hottest month on record was July 2016, which was 0.03C cooler, according to the US National Oceanic and Atmospheric Administration (NOAA).

The results had been expected after several European countries including France, Belgium and Germany reported that July smashed previous national temperature records. The Swedish town of Markusvinsa recorded 34.8C, the highest ever temperature measured north of the Arctic Circle.

The July peaks came hot on the heels of a sizzling June, which was the hottest June recorded over the past 140 years. An Icelandic girl holds a sign calling for action on climate change at the site of the former glacier called Okjokull, Iceland’s first glacier lost to climate change. Picture: AFP

The plaque left at the extinct Ok glacier acknowledges to the future generations that we know what’s going on (with climate change), and only the people reading this in 200 years will know if we did enough about it to stop all the glaciers from disappearing.

Rule a line across a page, halfway down. Divide the top half into four boxes. Now label and complete this chart that could be buried in a time capsule in your school, letting future generations know what you knew and planned to do about climate change. This will allow future generations to know what children in 2019 were thinking and feeling and what they tried to do to help stop climate change.

Complete your page by drawing a picture in the space on the bottom half. Label this: My illustration of what the Earth looks like now compared to in 100 years

2. Extension
Complete an Acrostic Poem titled ‘OK GLACIER’ using facts and information about why this glacier is extinct and climate change in general to write a sentence for each letter.

VCOP ACTIVITY
A letter to the future
The plaque, which notes the level of heat-trapping carbon dioxide, also bears a message in Icelandic and English, titled “A letter to the future”.  The letter reads: “Ok is the first Icelandic glacier to lose its status as a glacier. In the next 200 years all our glaciers are expected to follow the same path. This monument is to acknowledge that we know what is happening and what needs to be done. Only you know if we did it.”

What does the last line mean?

Why do you think they wrote it?

HAVE YOUR SAY: If you lived in Iceland, would you go to the funeral for the glacier? What is one thing you would put in a letter to the future?
No one-word answers. Use full sentences to explain your thinking. No comments will be published until approved by editors.