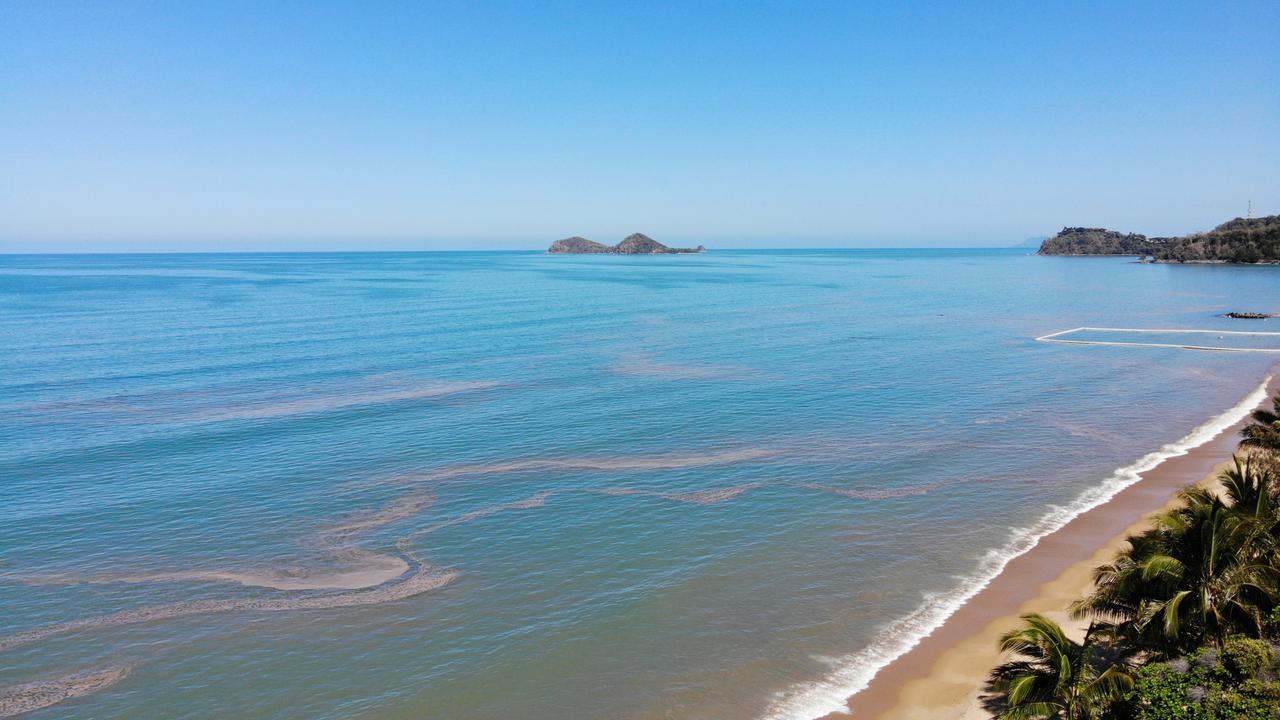 Signs of this year’s coral spawning from the Great Barrier Reef wash in towards the beach on Cairns coast north of Ellis Beach, Qld on Sunday, December 6. Picture: Stewart McLean.

In an Australian first, the incredible annual Great Barrier Reef spawning has been shown live on TV.

It’s hoped that the event will bring the whole country together in awe*.

Coral mass spawning is an annual natural event after a full moon in which multiple species of corals synchronise* the release of sperm and eggs over several days in order to make baby corals, or coral larvae.

“This is an Australian first, it’s a real-time, visual insight into this massive biological phenomenon,” said actor Brooke Satchwell, co-host of the Reef Live program, which is now available as a two-episode documentary on ABC iview.

“It’s a breeding event on such a scale that it can be seen from space.”

The Great Barrier Reef is the only natural structure that can be seen unaided from space and is home to about 9000 species. The Great Barrier Reef is the only natural structure that can be seen unaided from space and is home to about 9000 species.

“They are all regenerating and procreating* because of the synchronicity* of the temperature, light and the Moon,” Ms Satchwell said.

“This is how the reef regenerates and it’s the size of Italy and it’s extraordinary.”

“This is an opportunity for a shared cultural event, up there with sporting events and the Moon landing,” she said.

The broadcast was timed to take place when scientists predicted it was most likely for the spawning to happen, once the ocean temperature has been at 26C or above for a month.

Corals generally reproduce four to six nights after the full Moon in November when there is little tidal movement, and about two to three hours after the sun sets because plankton feeders will be asleep, giving the coral larvae more time to settle on the ocean floor without being eaten. Ms Satchwell said the hope was the live broadcast would help people connect with what’s in their backyard*.

“Hopefully it will connect people to the reef and give a sense of custodianship*, we are custodians* of the environment,” she said.

“It’s magical and needs to be protected, it’s our home. Hopefully this will inspire people to step up to that responsibility.”

Asked whether Australia is doing enough on climate change, which is the biggest risk to the reef, Ms Satchwell said “no”.

However, she also pointed to other factors in the health of the reef including run-off from farms that release pollution into the waterways.

“I think what people forget is that everything is connected,” she said.

“What goes down our sinks also goes into waterways … we are poisoning the whole system including ourselves.

“Our environment is fragile and once it has collapsed it’s gone for good.” 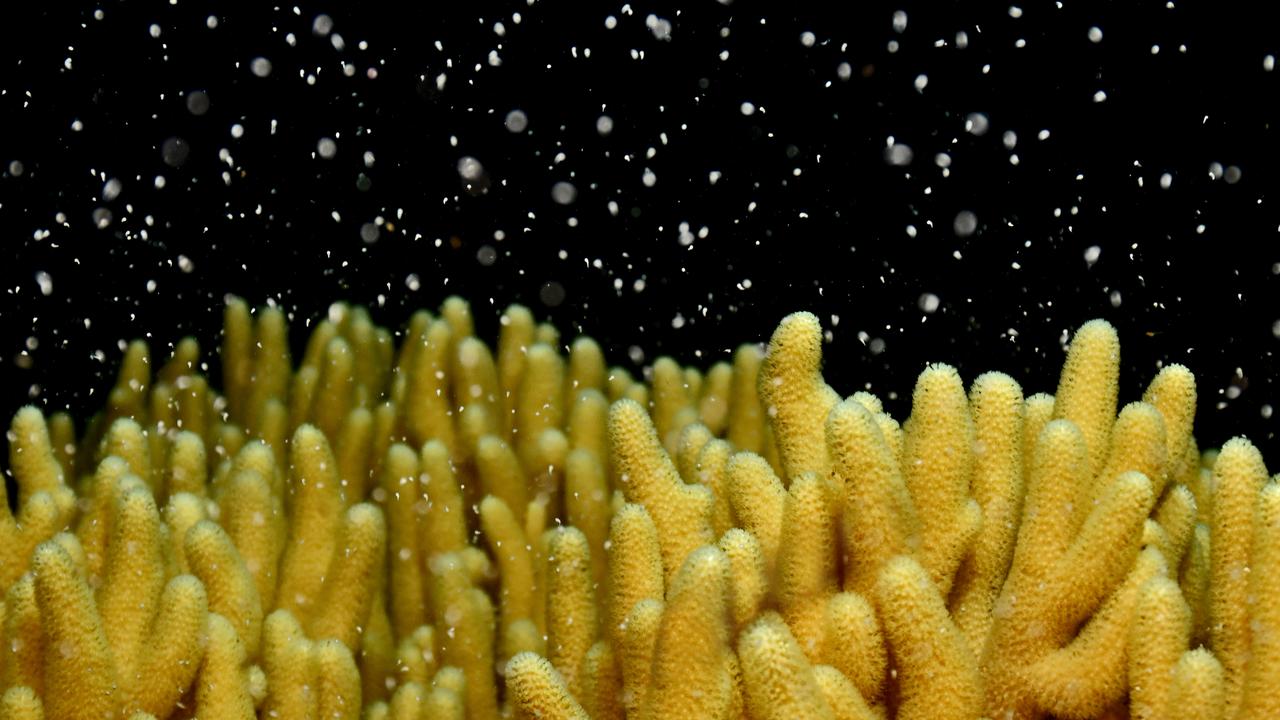 This year the reef experienced its third mass bleaching in five years.

A report from the Climate Council predicted that the reef could be hit with bleaching every two years by 2034 unless more was done to limit climate change.

“A 2C rise in average global temperature will almost certainly mean the collapse of warm water tropical reefs around the world,” the report states.

In order to give the reef a chance of survival, global warming must be limited to 1.5C but it has already reached 1C.

This year the International Union for Conservation of Nature also downgraded the reef’s outlook from “significant concern” to “critical”.

Ms Satchwell said the Reef Live program would showcase the incredible people who were dedicating their lives to supporting and preserving the reef.

During the live broadcast, marine biologist Dr Dean Miller, free diver and marine scientist Lucas Handley, and shark advocate* Madison Stewart reported from above and below the water.

The two-episode Reef Live documentary is now available to watch on ABC iview.

CORAL SPAWNING
Coral may look like a plant, but it is actually classified as an animal. The tiny individual corals, called coral polyps, live with many others as a colony.

Coral can’t move around the ocean looking for a mate to make young coral with. Mass, co-ordinated or synchronised spawning solves this problem.

A few days after a full Moon once a year, when temperature, light and tide conditions are right, the coral releases eggs and sperm, called gametes.

It looks a bit like a blizzard as the billions of red, orange, yellow and white flakes of gametes float to the surface, where the sperm fertilises the eggs. It has to happen in this co-ordinated way as the gametes are only viable or fertile for a few hours.

The eggs and sperm join together to make an embryo* that develops into coral larva, which floats around in the ocean before dropping to the floor and hopefully growing into adult coral as part of new colonies. 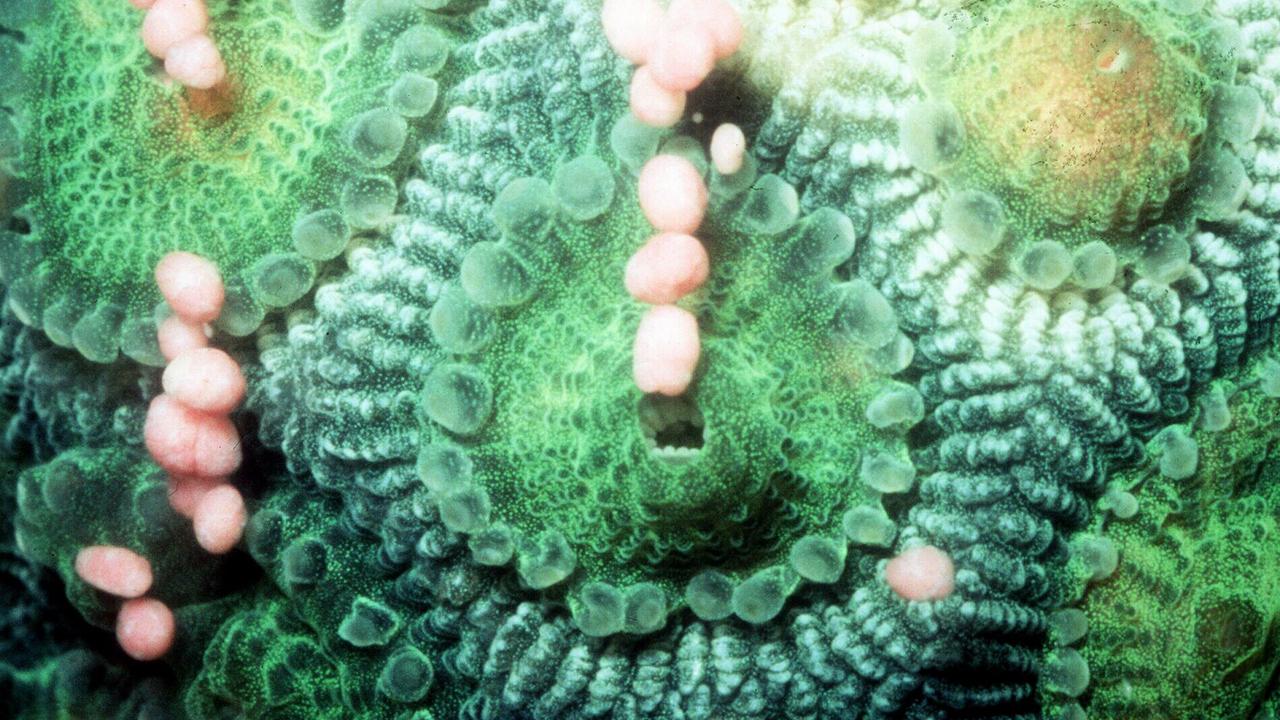 Painting clouds and other ideas to save Reef

CLASSROOM ACTIVITIES
1. Flow Chart
Conditions have to be just right for this spawning event to take place and to be successful.

Draw a flow chart that shows what the conditions need to be for it to take place. Then show what will happen during and after this mass spawning event

Make sure you use diagrams and simple sentences to show and explain the sequence of events that have/will occur during this annual event.

2. Extension
Brooke Satchwell co-hosts this event. Her job was to help explain to viewers what is happening and why it is significant. She along with her co-hosts create interest, intrigue and a sense of pride, wonder and custodianship of the reef.

Write your own version of Brooke Satchwell’s introduction to the live broadcast. It should go for approximately 1-2 minutes. You will need to welcome the viewers, introduce some of your co-hosts, and explain what amazing event you are about to witness. Explain where the reef is, its importance and our role in protecting it. Include any other information you feel is important for the introduction. A lot of the information you will need can be found in the article, however you may also like to do some more research to help you.

Practice delivering this introduction using appropriate vocal and facial expression and body language to evoke a sense of amazement, pride and responsibility for the reef.

If you get the opportunity to watch the event later on ABC iview, compare the introduction you wrote to the one that is delivered. How do they compare? Did they include the same details as you? Is there anything you feel you should have included?