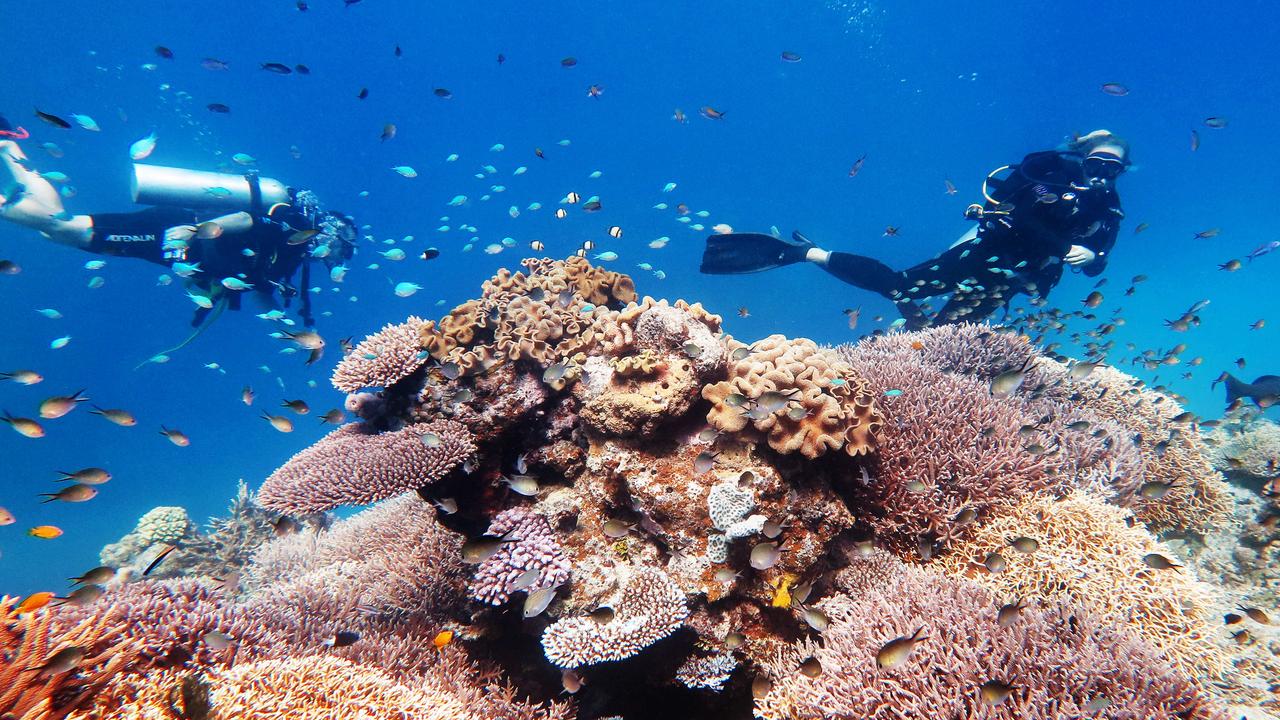 Divers explore coral gardens of the Great Barrier Reef, which has avoided being listed as ‘in danger’ by UNESCO’s World Heritage Committee. Picture: Brendan Radke

The Great Barrier Reef has avoided an “in danger” listing from the World Heritage Committee.

Committee members have voted not to downgrade the reef to “in danger”, following intense lobbying* from the federal government.

Instead, Australia will now have until February 2022 to show how its actions are helping improve the reef’s health and demonstrate why it should not be listed as “in danger”.

Committee issued a draft* decision to declare the reef “in danger”. An aerial view of the Great Barrier Reef off the coast of the Whitsunday Islands, along the central coast of Queensland. Picture: AFP

This prompted a campaign* by the Australian Government to block the “in danger” listing, fearing it would hurt the image of the natural wonder and icon* of Australian tourism.

Ms Ley welcomed the July 23 decision not to immediately add the reef to the “in danger” list and said it was never about Australia “hiding from the challenges facing the reef or the pressures of climate change”.

“It has been about ensuring a fair and transparent* process for the reef and the people who work tirelessly to protect it,” she said.

“Our concern was always that UNESCO had sought an immediate ‘in danger’ listing without appropriate consultation, without a site visit and without all the latest information, and it is clear that this process has concerned not only Australia but other nations as well.” Ms Ley said immediately adding the reef to the “in danger” list “made no sense”.

A dozen other countries agreed, putting forward an amendment* to the draft decision. The amendment said the reef should not be considered for this “in danger” list until 2023.

Nineteen of the 21 committee members spoke in favour of the amendment before Norway proposed a further amendment to bring forward the timetable for considering the reef’s “in danger” listing by one year. This was unanimously* agreed to.

Environmental groups, including the Australian Marine Conservation Society, have campaigned in favour of the “in danger” listing.

“The science is clear, the reef is in danger,” said the society’s boss, Darren Kindleysides.

“UNESCO’s science-based recommendation to the World Heritage Committee to add the Great Barrier Reef to the ‘in danger’ list should prompt faster and stronger measures to protect our natural wonder from climate change and poor water quality.” He said that had the reef been listed as “in danger” it would have sent a message that it was “beyond repair and perhaps not worth visiting”.

“It is simply one of the most important things we’ve got going for the tourism economy of Australia,” Mr Gschwind said. A tourist dives near hard and soft corals growing on Saxon Reef, part of the Great Barrier Reef Marine Park off the coast of Cairns, Queensland. Picture: Brendan Radke

But he said the events should serve as a “global call to action” for more to be done on climate change to protect the reef, which supported up to 60,000 jobs and generated about $6 billion worth of economic activity before Covid-19 hit.

Federal opposition environment spokeswoman Terri Butler said the decision was a temporary reprieve* and that the federal government must “dramatically lift its game on reef protection”.

CLASSROOM ACTIVITIES
1. No Danger
Australia’s Government managed to hold off an ‘in danger’ rating for Australia’s famous Great Barrier Reef. We have only until February next year to ensure the actions we have in place are dramatically helping the state of it.

Work with a classmate and identify five key things the federal government needs to do between now and next year to ensure we are protecting and helping the Great Barrier Reef recover.

2. Extension
Create a catchy slogan to encourage visitors to visit the Reef once border closures and other Covid-19 restrictions are lifted. Your slogan should be short, sharp and to the point and make the reef sound like a must-see holiday destination.