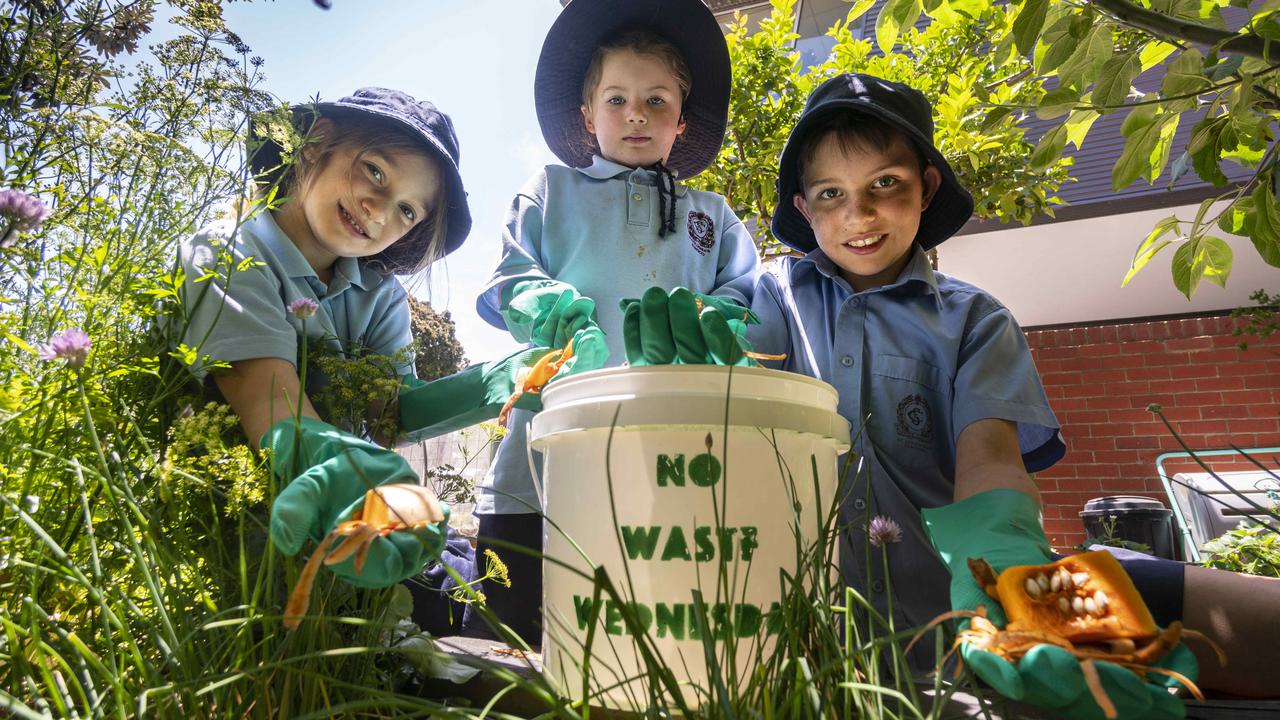 Collecting food scraps for compost is one way students can reduce the amount of waste they create. Picture: Valeriu Campan

Will you eat everything in your lunch box today? If not, what will you do with what’s left over? Save it for another time or throw it in the bin?

A new report by the United Nations estimates 17 per cent of all the food produced around the world gets wasted each year.

Most of the waste — 61 per cent — happens in households, while food services such as restaurants and cafes account for 26 per cent and shops account for 13 per cent, the UN found.

The food waste coming from households alone is estimated to amount to 74kg for each person each year. Some of the discarded lunch items found during a rubbish audit at a South Australian school.

The UN is pushing to reduce food waste globally, and researchers are also working on a way to track where and how food is being wasted.

The report authors said they hoped to get a clearer snapshot of the scale of the food waste problem, which has been difficult to assess, in the hope of encouraging governments to invest in better tracking.

“Many countries haven’t yet quantified* their food waste, so they don’t understand the scale of the problem,” said Clementine O’Connor, from the UN Environment Program and co-author of the report.

Food waste has become a growing concern because of the environmental toll of production, including the land required to raise crops and animals and the greenhouse gas emissions produced along the way.

The UN Environment Program estimates that wasted food is responsible for 8-10 per cent of global greenhouse gas emissions.

If food waste was a country, it would have the third highest greenhouse gas emissions in the world, after only the US and China. Experts say improved waste tracking is key to finding ways to ease the problem, such as programs to divert inedible scraps to use as animal feed or fertiliser.

The report found food waste in homes wasn’t limited to higher income countries such as the US, UK and Australia.

Food waste researcher Professor Brian Roe, from Ohio State University in the US, said food was also sometimes wasted in poor countries because they didn’t have reliable home refrigeration.

He said people in richer countries tended to eat out more which meant food waste was simply shifted from the home to restaurants.

Prof Roe, who was not involved in the UN report, said household and cultural habits could contribute to waste at home, including massive packaging, “buy one, get one free” deals or lack of composting* programs.

‘Use by’ or ‘best by’ dates on products could also be causing people to throw away food.

US food regulators have urged producers to clarify* the meaning of food dates and to be more consistent with their use, saying people could be throwing out food because they think it is unsafe to eat, when in fact the date is intended only to indicate when quality might decline.

“Food waste is a consequence* of sensible decisions by people acting on the best information available,” said agricultural economist Prof Chris Barrett, from Cornell University in the US.

Richard Swannell, a co-author of the UN report, said food was generally more valued, even in richer countries, just a few generations ago, because people often couldn’t afford to waste it.

He said raising awareness today about the scale of food waste globally could help shift attitudes back to that era.

“Food is too important to waste,” he said.

CLASSROOM ACTIVITIES
1. Food Waste
Create a table with two columns. Write “How food is/can be wasted in my life?” at the top of the first column and “Ways I can reduce this” at the top of the second column. Now think about the food consumption in your life at home and school. Do you think you waste a lot of food at home and at school? Write down the ways you might waste food in the first column. Try to think of some ways you could reduce this waste in the second column.

2. Extension
Write a letter to a local restaurant or supermarket asking them to outline ways they try to reduce their food waste. You could also ask them to consider alternatives to food waste such as giving it to animals, using it to cook meals for the needy and so forth. See if you receive a response from them in the near future (make sure you write your email or postal address so they can reply).