Newhaven Station manager Josef Schofield pictured walking in 2016 along one of the future fence lines.

Thirty endangered rufous hare-wallabies have been released in Australia’s Central Desert into a sanctuary created as part of a project building the world’s longest cat-proof fence.

The last rufous hare-wallaby population in Central Australia became extinct in the 1990s.

Some of the released animals had been saved in an emergency relocation after a bushfire elsewhere in 2017 and have been living in a temporary refuge ever since.

Their new home is a 9500ha fenced sanctuary, which is stage one of a project managed by Australian Wildlife Conservancy (AWC) to build the world’s biggest cat-proof fence. The fence is to keep out feral* cats to save dozens of endangered Australian animals from extinction. Ranger Christine Ellis with mother, Alice Henwood, and daughter Barbara and station manger Josef Schofield on a sand dune on Newhaven Station, NT, where the cat-proof fence is being built to provide sanctuary for endangered animals.

The fence, northwest of Alice Springs in the Northern Territory, will eventually form a 100,000ha bushland refuge. That’s an area as big as Hong Kong.

Stage one of the fence, at Newhaven Sanctuary, 350km northwest of Alice Springs, is 44km long and was completed in March last year.

Once the 44km fence was complete, the gates were shut and AWC staff and Warlpiri Newhaven rangers set about removing every single feral cat from the area.

The last cat was removed in December.

There are thought to be 11 million feral cats in Australia.

They are the same species as domestic cats but they live and reproduce in the wild. They hunt mammals, reptiles and birds and can pass diseases onto native and domestic animals and humans. 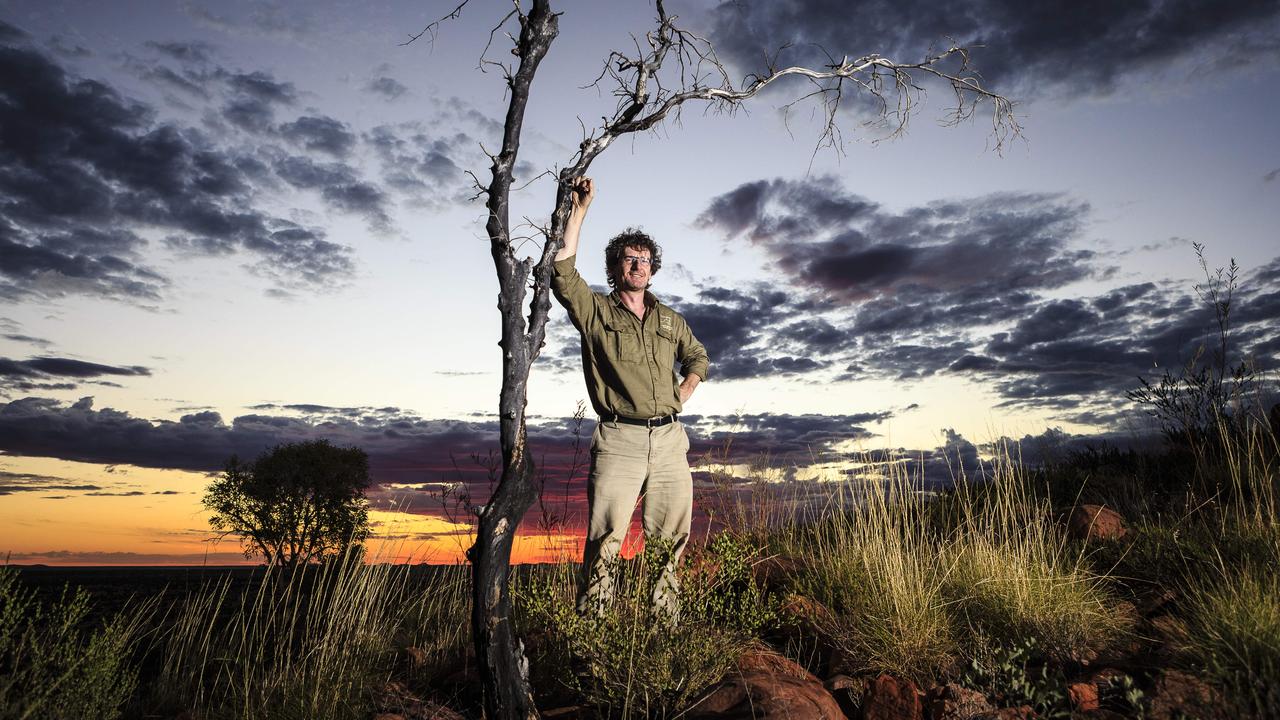 In total, 46 cats, two foxes and all rabbits were removed from within the fence.

As well as the rufous hare-wallabies, other native species to be reintroduced by AWC into the fenced area in the future include central rock rats and phascogales. This little kangaroo is of great cultural significance to the Warlpiri people.

They are endangered in Western Australia and South Australia and extinct in the wild in NT. There are thought to be fewer than 4000 remaining. 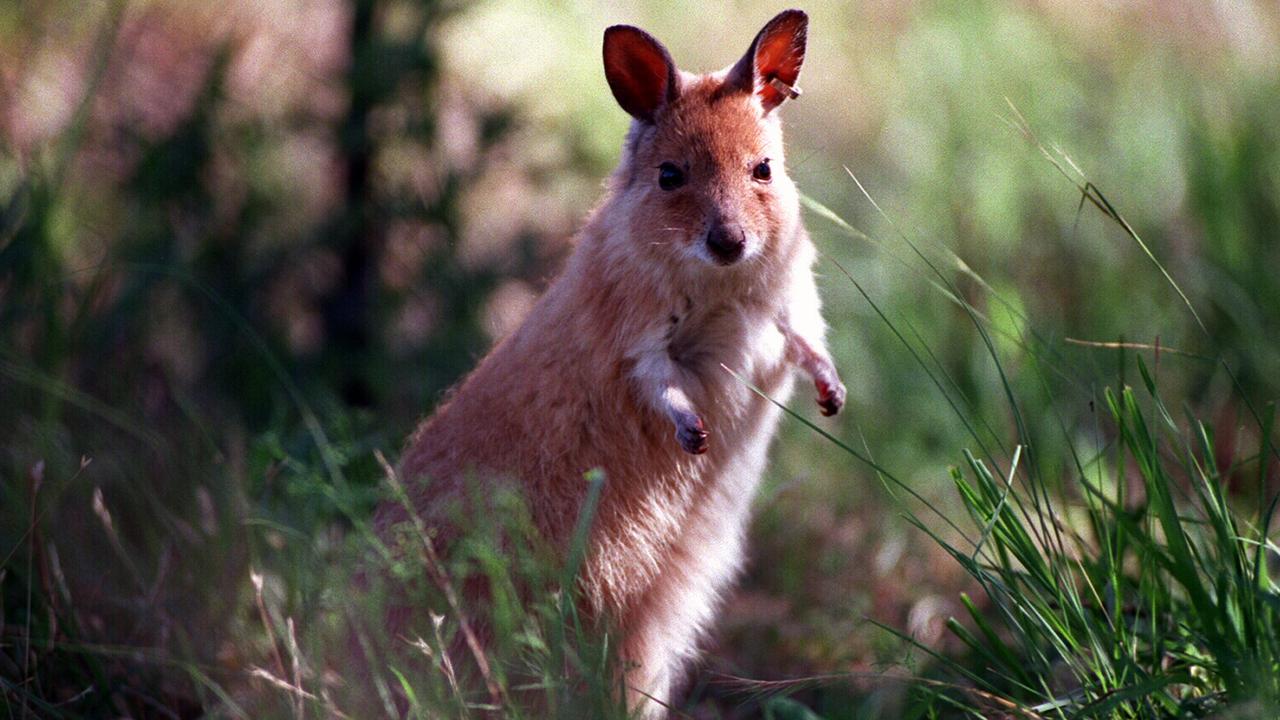 The Newhaven fence project is aiming to increase numbers by more than 400 per cent and will create the only free-ranging population of the species on the Australian mainland for the past 25 years.

The goal is to build a population at Newhaven of 18,000 wild rufous hare-wallabies.

Some of the released rufous hare-wallabies were saved in an emergency translocation from Watarrka National Park south of Newhaven after a bushfire in 2017 and have been living in a temporary refuge elsewhere since then. The other rufous hare-wallabies came from the Scotia Wildlife Sanctuary on the border between New South Wales and SA, south of Broken Hill, NSW.

Rufous hare-wallabies have also been reintroduced into a fenced area within Uluru-Kata Tjuta National Park, NT. A tiny baby frog discovered at a waterhole on Newhaven Station, NT.

ABOUT THE CAT FENCE
Stage one of the project included building a 44km fence enclosing 9400ha of land.

The completed fence is expected to cost $10 million.

The State Barrier Fence of Western Australia, formerly known as the Rabbit-Proof Fence, the State Vermin Fence and the Emu Fence, was built between 1901 and 1907 to prevent rabbits and other agricultural pests moving from the east onto WA farming land. When it was completed in 1907 it was 3256km long. Surveyor Alfred Canning and team marking out the line of the rabbit-proof fence in WA in about 1901. Picture: National Library of Australia

The book is based on a true story from the 1930s of three Aboriginal girls who used the fence to find their way home to their parents after they were taken from them. A scene from the 2002 film Rabbit-Proof Fence.

The other famous fence is called the DingoFence or Dog Fence. This was built in Australia during the 1880s and finished in 1885. Its purpose was to keep dingoes out of southeastern Australia and protect sheep in southern Queensland. It stretches in a wiggly line from southeast Qld west to Cameron Corner (which is a point on the state borders between Qld, NSW and SA) and across SA to the Great Australian Bight. At 5614km, it is one of the longest structures in the world.

Research finds dingoes are not dogs

CLASSROOM ACTIVITIES
1. Animal sanctuary
Create a detailed illustration or artist’s impression of what the completed fenced Newhaven Sanctuary will look like. Start by drawing the cat-proof fence and then add in all the species that the rangers aim to protect and allow to thrive in the sanctuary. Add captions about the type and number of species to be included, size of fence, number of hectares of land and so forth. You’ll find all this information in the Kids News article. The more detail you can include the more interesting and informative your illustration will be to its viewers.

2. Extension
Should we aim to eradicate all feral cats in Australia? Work with a partner and write a list of arguments FOR and AGAINST keeping feral cats in our country.

HAVE YOUR SAY: Have you ever seen a fox or a feral cat? What should responsible pet owners do to make sure they are not contributing to Australia’s feral cat problem?
No one-word answers. Use full sentences to explain your thinking. No comments will be published until approved by editors.