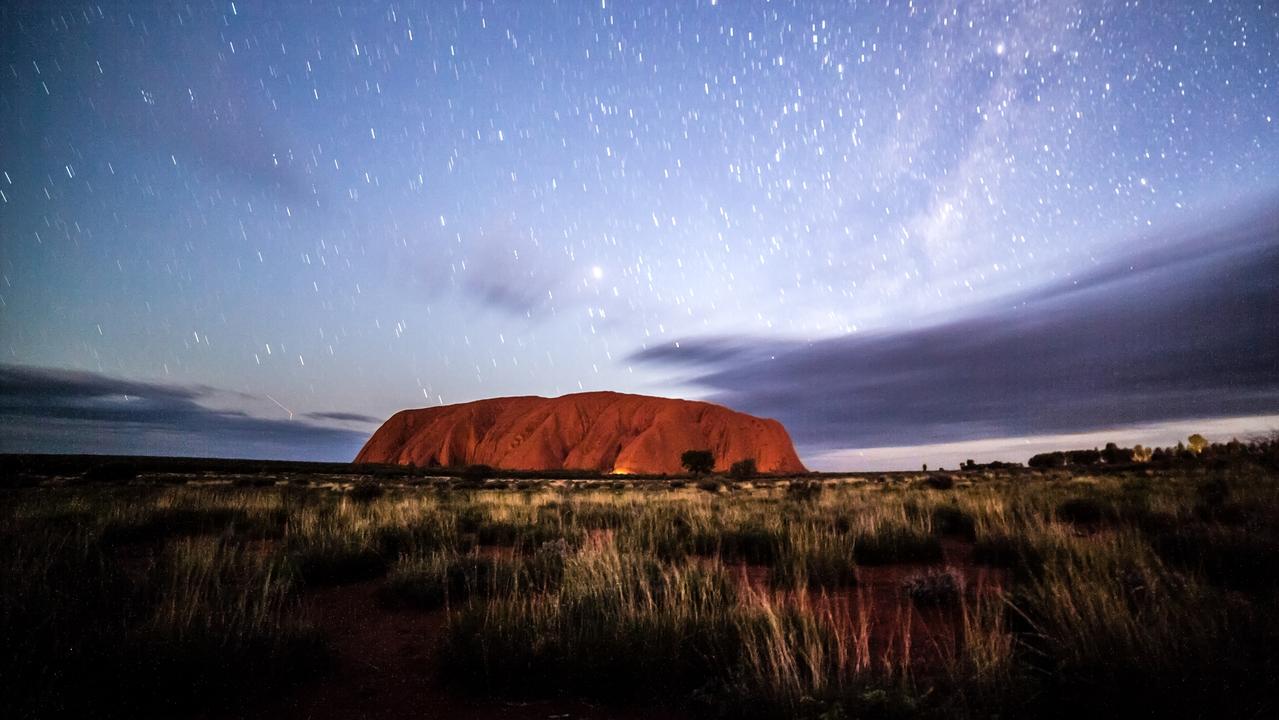 Uluru and the Uluru Kata Tjuta national park surrounding it. Both are being spoiled by tourists keen to climb the rock before a ban begins in October.

Tourists are rushing to climb Uluru* before it is banned in a few months, causing traffic problems on the rock and polluting its surrounding parklands.

Queues of tourists snaking* up to the top of the sandstone rock have been photographed in recent weeks as up to 500 travellers arrive daily.

They are keen to walk to the top of the central Australian landmark* before the climbing ban begins on October 26. Tourists queuing to climb to the top of Uluru. Picture: ABC

Traditional landowners are devastated by the masses rushing to climb Uluru before the cut-off date despite it being common knowledge indigenous* people consider the act deeply offensive*.

“It makes me sick looking at this photo at the disrespect* and disregard* shown for the traditional owners’ wishes,” said a spokesperson from the Darug Custodian Aboriginal Corporation.

“Not only do people climb it but they defecate*, urinate and discard nappies and rubbish on it.

“I, for one, cannot wait for the climb to be permanently closed and our sacred lore*, culture and traditions to be acknowledged and respected.”

About 140 people were climbing the rock each day when the ban decision was made in 2017, but that number has jumped to between 300 and 500 people as the ban deadline approaches.

Tourists flock to climb Uluru ahead of ban

“(Tourists) think they’re doing a good thing by free camping along the way; what they are actually doing is trespassing on pastoralist* and protected land, and a lot of people don’t seem to be getting that message,” Mr Schwer said.

“When there is the kind of influx* of drive travel as we are seeing at the moment, there is an influx of waste.”

Lindy Severin, the owner of Curtin Springs station about 100km from Uluru, said thousands travelling in caravans had been dumping their toilet tanks on the roads.

“There are limited areas to dispose of black waste* in Central Australia — it’s either Alice Springs or Ayers Rock near here — and we’ve got visitors who don’t want to stand in queues to dump waste,” Ms Severin told the ABC. Tourists will still be able to visit and walk around Uluru after October, but they will not be permitted to climb the rock. Picture: Tourism Australia

The decision to ban climbing on Uluru came after it was found that less than 20 per cent of people visiting the park were making the climb, down from more than 70 per cent in previous decades.

Uluru, or Ayers Rock as it was previously known, is sacred* to indigenous Australians and thought to have started forming about 550 million years ago.

Design a brochure with the aim of convincing tourists not to visit right now, or if they must, to behave in a more appropriate way. Carefully choose the images and language that you will use to get your point across.

2. Extension
One way to solve the problem of the influx of tourists would be for Uluru to be closed to climbers earlier than planned, effective immediately. What are your thoughts on this idea? Is it fair or unfair, and to whom? Write a paragraph (or more) explaining your opinion.

VCOP ACTIVITY
Supporting the ban
Whether you agree with the ban or not, it is happening and people are trying to climb Uluru before it closes. It’s devastating that people are disrespecting the country by dumping rubbish and waste, but the increase in tourist numbers is also boosting tourism in the area and thus providing more jobs to the local community.

How can the local council or government support the influx of tourism to the area?

Make a list of initiatives that could be put in place to ensure the tourists cause the least amount of damage while they are there. Think about when the Commonwealth Games were in Queensland, or the Olympics were in Sydney.
Things had to change to support the crowds that would be attending the events and the added tourism to the area. But like these events, the crowds at the rock will also not continue to be this large, so you need to come up with short-term solutions.

HAVE YOUR SAY: If you were travelling to Uluru before October 26, would you choose to climb the rock or not? Tell us why.
No one-word answers. Use full sentences to explain your thinking. No comments will show until approved by editors.