Elections Part 2: Cast a vote and eat a democracy sausage on election day 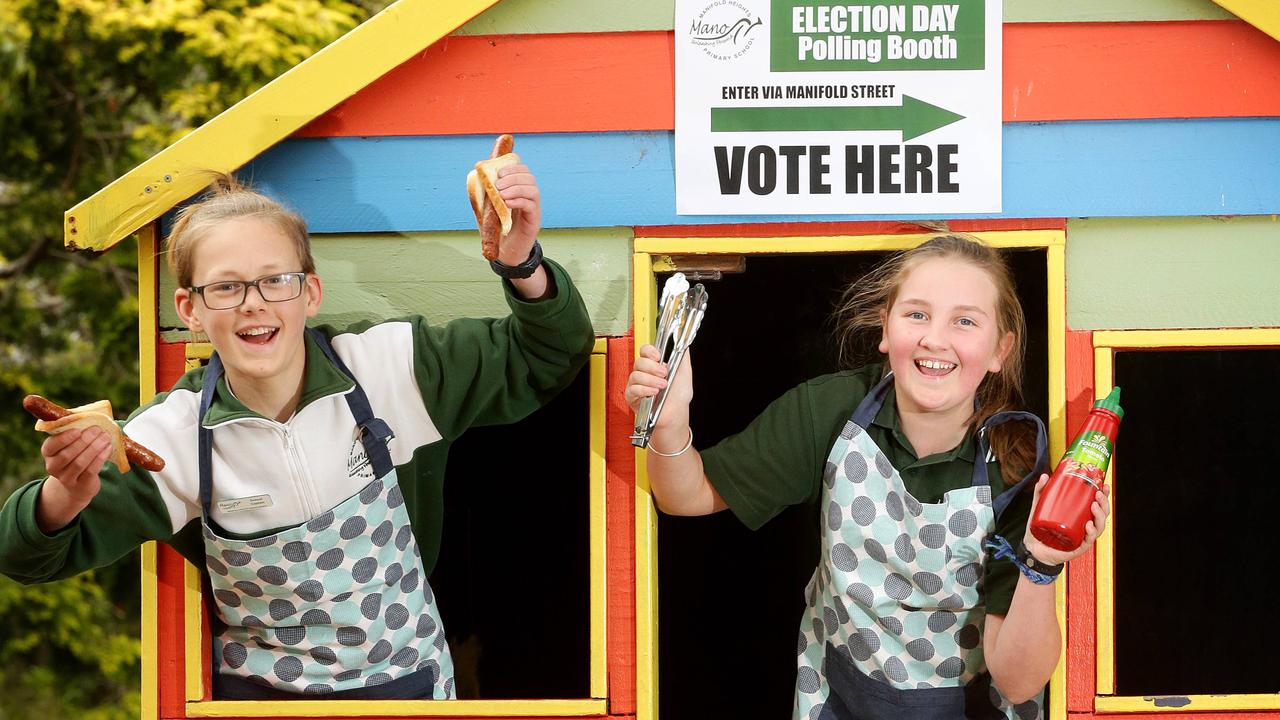 These students from Manifold Heights Primary School helped cook up democracy sausages to raise money for their school at the last Victorian election in 2018. Picture: Alison Wynd

All Australian citizens aged 18 and over have the right to enrol to vote to elect people to represent them in the Australian parliament, where laws and other big decisions about running the country are made.

This means Australia is a representative democracy.

HAVING YOUR SAY
Representative democracies function best when almost everyone votes, because the result is a more accurate reflection* of the wishes of the nation’s people.

Voting is compulsory* in Australia. In countries where voting is optional* or some groups of people are excluded* from voting, people can win an election despite* only a small proportion of the population wanting them to win. Voting is compulsory for people aged 18 and over in Australia, which makes us a representative democracy. Picture: AAP Image

RIGHT TO VOTE
Achieving the right to vote and stand for parliament was a long struggle for some Australians.

In 1902, Australian parliament set a law allowing white women to vote and stand as a candidate in federal elections. However, women who the laws at the time identified as “aboriginal natives” (including women with Aboriginal and Torres Strait Islander, African, Asian and Pacific Island heritage) were not included in this new law.

ENROLLING AND VOTING
It is compulsory and your responsibility to both enrol to vote and to actually vote.

It is your responsibility to keep enrolment details up to date, for instance, if you move house. If you don’t enrol or vote, you are committing an offence under laws called the Electoral Act and you can be fined.

If you live overseas, including Antarctica, you are allowed to vote but it’s not compulsory.

ABSENTEE, EARLY AND POSTAL VOTING
Australia’s electoral system encourages as many eligible people as possible to vote. If you know you won’t be able to attend a voting centre on election day, you can vote early or submit a postal vote. A person booked to have an operation or due to have a baby on election day, or who is going to be a long way from any voting centre can choose to do this.

If you are away from your electorate on election day you can go to a voting centre in another electorate and submit an absentee* vote.

Mobile voting teams visit people who can’t attend a voting centre, such as residents of nursing homes or patients in hospitals.

ON THE DAY
To vote on election day, enrolled voters visit an official voting centre, also called a polling booth. These are often at schools, community halls or sports centres.

At the voting centre, an official crosses each voter’s name off the electoral roll and gives the voter two ballot papers: one for the House of Representative candidates in that electorate and one for the candidates for the Senate. Each paper includes instructions. DEMOCRACY SAUSAGES
Election day – always a Saturday – can be fun. People are out and about in their neighbourhood with an activity in common and there is an atmosphere of anticipation* as everyone waits to learn the results.

You’ll see volunteers outside voting centres handing out information about the election candidate they support. You’re welcome to take a copy of each. When you’re finished with them, pop them in the recycling bins provided. The day even has its own special menu!

Democracy sausages (really just a barbecued sausage in bread or a roll) have become an Aussie tradition famous around the world. A politician eating a sausage when they go to vote makes for a fun news photo.

On the election campaign trail