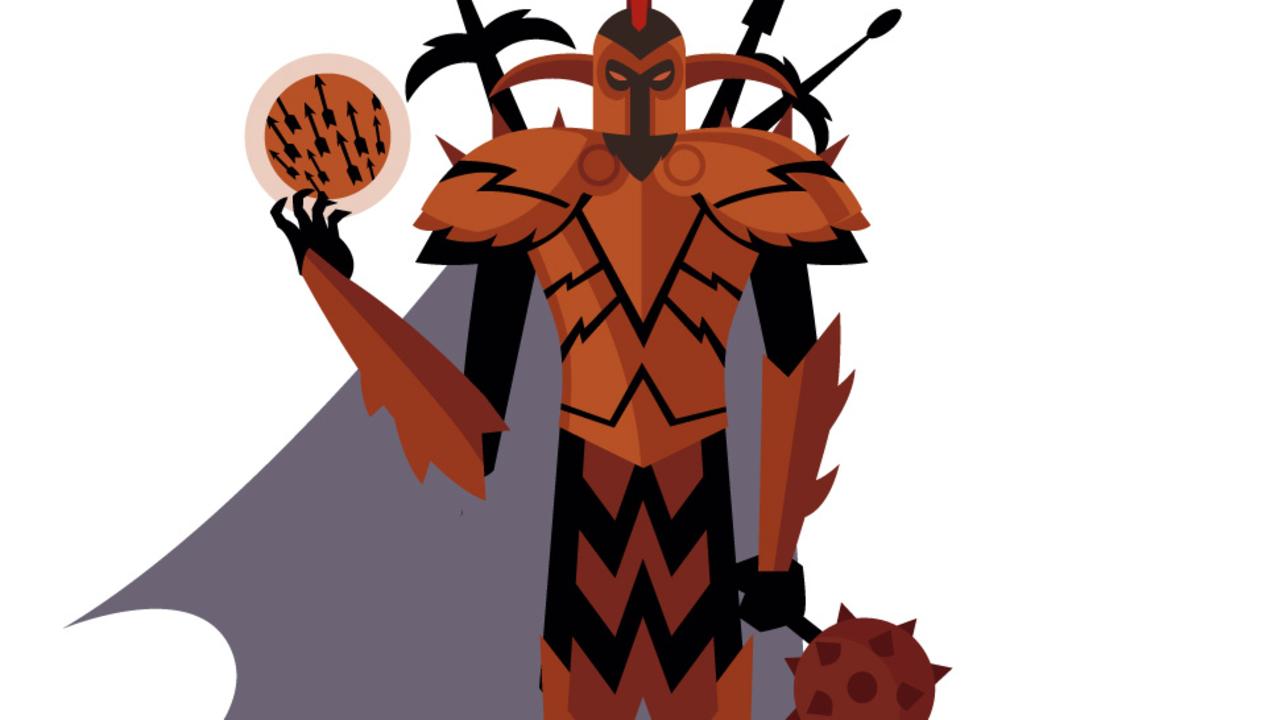 Ares, the Greek God of War.

Along with Zeus, there were six other Greek Gods among the 12 Olympians of Mt Olympus who ruled in Ancient Greece. 1. APOLLO: God of the sun, the light, music and prophecy

Apollo was a very interesting God. He was extremely handsome with long, black hair and an athletic body. He looked younger than his years.

He was also extremely good at archery and had a touch of the dramatic about him — he drove a golden chariot drawn by swans.

Apollo often associated with humans and taught men the art of medicine, so he is often referred to as “The Healer”. But Apollo’s powers could also bring ill-health and deadly plagues* to Earth.

He was also known as the patron defender of herds and flocks and had his own herd of cattle, which he cared for.

Music played a large part in Apollo’s life and he was recognised as the patron God of music and poetry. He was also the leader of the Muses (who were the inspirational Goddesses of literature, science, and the arts) and Apollo was director of their choir.

Apollo is often shown carrying a musical instrument call a lyre. He carried it everywhere. When hymns were sung to Apollo they were called paeans.

Because of his truthfulness and integrity*, he was granted the gift of prophecy (the ability to predict events) and oracles (people who could give a glimpse into what would happen in the future).

Apollo had one oracle who was said to speak directly to him at Delphi, an important religious sanctuary*. The oracle — the Pythia or priestess — would answer questions put to her by visitors wishing to be guided in their future actions. The whole process was a lengthy one, usually taking up a whole day and only carried out on specific days of the year.

Tragedy also played a part in Apollo’s life. He accidentally killed his closest friend, Hyacinthus, in a discus throwing contest.

The Pythian Games were an athletic event held every four years. They were named after the monster python famously slain by Apollo at Delphi. 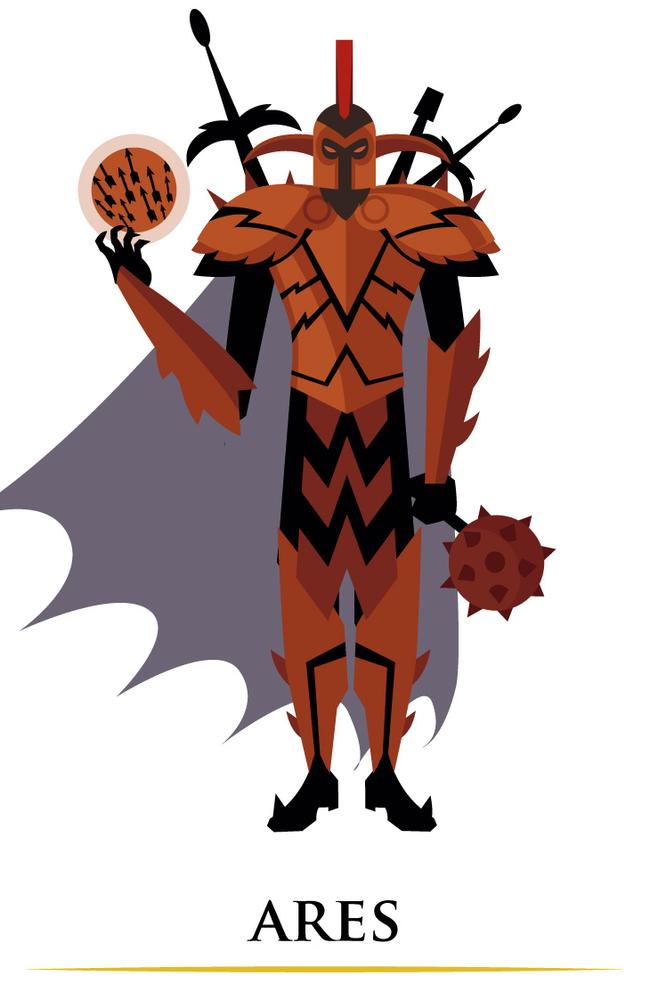 Ares the Greek God of War

Ares was a strange God. He was known as the God of War and wore armour and a helmet, and carried a shield, sword, and spear, but he didn’t like to fight.

Despite being big and strong and possessing a fierce war cry, he preferred to watch others fight rather than take part in the action himself.

The Ancient Greeks didn’t like war either and they didn’t think much of Ares. They considered him a troublemaker and useless in a war.

Once, a group of giants declared war on the Gods because they wanted to control the whole universe. To stop Ares joining the battle, they sneaked up on him and knocked him out, before stuffing him into a jar.

The other Gods heard Ares screaming for help, but they ignored him because they decided they could fight better without him. They were able to defeat the giants, and then let Ares out of the jar after the battle was over.

Ares bragged about how he could have beaten the giants if he’d been free, which made the other Gods laugh.

Ares was famous for switching sides during a battle.

The war between Greece and Troy was one of the worst ever fought, and even the Gods joined in the fighting. When the war started, Ares promised his mother, Hera, to help the Greeks. But he was in love with the goddess Aphrodite, so she easily talked him into helping the Trojans.

In that fight he challenged a mortal Greek warrior named Diomedes, and he wounded Ares. Even though he wasn’t hurt badly, Ares went running back to his father Zeus and starting whining about what had happened to him.

This happened often. Zeus was not impressed by such behaviour. Dionysos the God of wine

Dionysus was the last of the 12 Gods to arrive on Mt Olympus.

Wine was a major part of Ancient Greek culture, meaning Dionysus was viewed as an important and popular figure in Mythology.

He had an extremely unusual start to life.

Zeus is believed to have saved the life of the unborn Dionysus by sewing him into his thigh after Dionysus’s human mother died.

A few months later, Dionysus was born from Zeus’s leg with many saying he was “twice born”. He was sometimes called “dimetor” (of two mothers).

Dionysus grew up to become a mature man, bearded and robed. However, in later times, Greek Mythology shows him to be a beardless, semi-naked youth. It is hard to know which is correct.

As a man, Dionysus learned to cultivate grapes and became the first to turn them into wine. He then travelled to Asia teaching humans the secrets of winemaking.

It wasn’t until after his long journey that Dionysus climbed Mt Olympus and became the 12th Olympian.

Dionysus was a happy God during the harvest, but during the winter he suffered along with the rest of the Earth.

One famous tale about Dionysus was that he was captured by pirates because he looked like the son of a king. They kidnapped him with a plan to ask for ransom from his parents for his safe return. But it didn’t work out for the pirates. They were unable to hold Dionysus because the ropes they tried to bind him with all fell apart once they touched the Greek God. .

Dionysus had love in his life, too. He rescued the Princess Ariadne of Crete from the island of Naxos and fell in love with her. Upon her death, Dionysus placed the crown he had given her among the stars.

One other interesting fact about Dionysus is that it was he who granted King Midas the power to turn whatever he touched into gold, then was kind enough to take the power back when it proved troublesome (see separate later story on King Midas).

KEY FACTS ABOUT DIONYSOS
Rules over: The grape harvest, winemaking and wine, pleasure, festivities and theatre Hephaistos the God of fire and metalwork

Hephaistos was a working God. He was a blacksmith with incredible skills who built palaces, homes for humans, furnishings and armour for battles.

In his workshop, Hephaistos had assistants who were made out of gold and who helped him with his work.

He had his own palace on Mt Olympus in which he made many clever inventions, including the arrows used by Cupid, the God of love and desire.

Hephaistos had a tough start to life. He was born deformed* with a lame* leg and was cast out of heaven by one or both of his parents when they noticed that he was not perfect.

However, that didn’t stop him finding love later in life.

Despite what as described as his ugly appearance, he was married to Aphrodite by Zeus to prevent a war of the gods fighting for her hand.

Hephaistos was worshipped by humans in Athens where he had a temple devoted to him. He was often shown in artwork as working over an anvil. 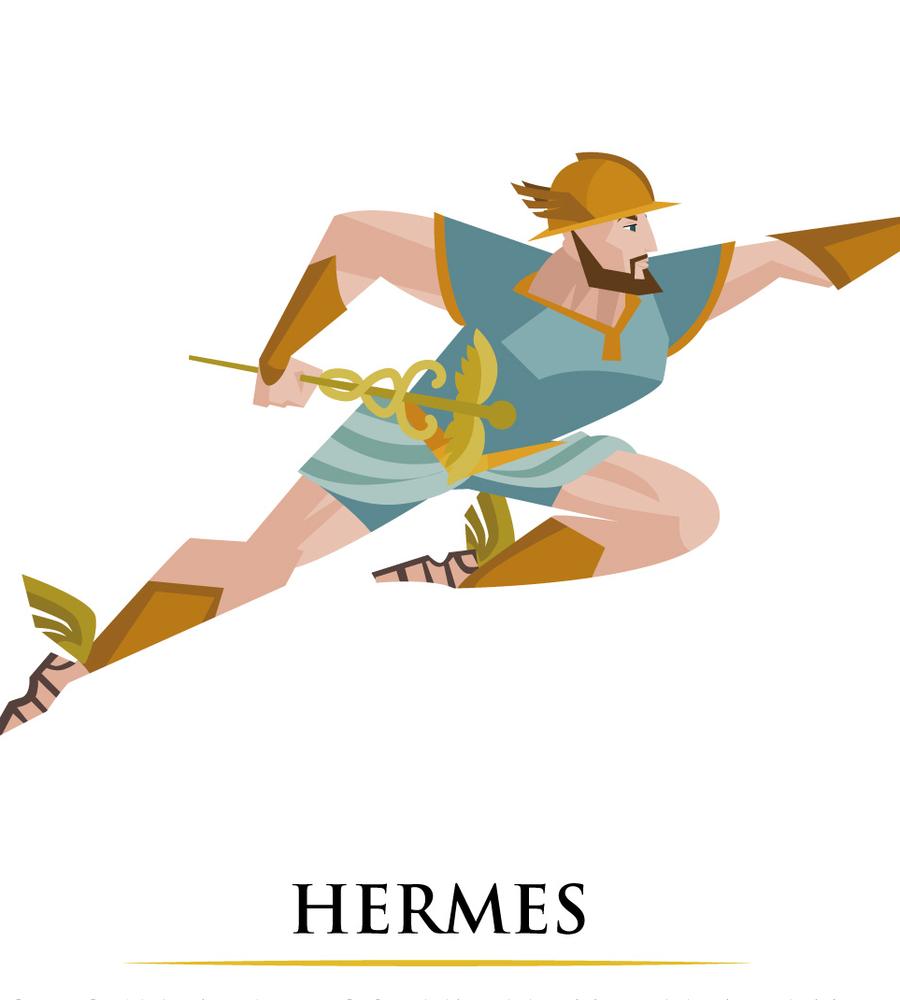 Hermes, the God of Travel

Hermes was born inside a cave on a mountain in Arcadia. It is said he was conceived* and born within one day.

Then, on his very first day of life, he found an empty tortoise shell and decided it could make sound. He created a musical instrument called a lyre by stringing sinews* across it.

Hermes grew up to be a graceful youth, wearing a winged hat and winged sandals. Despite being the second youngest Olympian God, he was named Messenger of the Gods and guide of dead souls to the Underworld.

He was known to be quick and cunning and had the ability to freely move between the mortal and divine worlds (he was also known as the God of borders and transitions).

He was a busy God. He was also the patron and protector of travellers, herdsmen, thieves, speechmakers and wit, literature and poets, athletics and sports, invention and trade.

In some myths Hermes is shown as a trickster where he would fool the Gods either for the good of humankind or for his own amusement.

Hermes played a part in the famous Greek love story of Orpheus and Eurydice. After Eurydice is granted one day on Earth with her husband, it was Hermes who escorted her back to the Underworld.

The symbol that signified Hermes as a divine messenger was his staff (or caduceus, which is a long stick).

This was originally a willow wand wrapped with ribbons. But the ribbons were later shown in Greek Mythology as snakes. To support this, a story evolved that Hermes used the caduceus to separate two fighting snakes which then wrapped themselves together in peace.

Interestingly, Hermes’ son Pan was half man and half goat. Poseidon, the God of the Sea

6. POSEIDON: God of the Sea

Along with controlling the sea, Poseidon was also God of earthquakes, storms, and horses.

He was also the grumpiest of the Gods. He was called the most bad-tempered, moody and greedy of the Olympian Gods.

And if anyone insulted him, he was quick to take revenge.

It was a pact* between Poseidon and his brothers Zeus and Hades that resulted in him becoming God of the Sea.

After the Gods defeated the Titans, the world was divided into three and the three brothers drew straws to decide which they would rule.

Zeus drew the skies, Hades the Underworld, and Poseidon the seas.

Sailors relied on Poseidon, who carried a trident or three-pronged spear, for safe journeys on the oceans.

Poseidon could strike the ground with his trident to produce an earthquake, which earned him the nickname “Earth-shaker”.

Poseidon spent a lot of time on Mt Olympus but preferred his palace made of gems and coral on the ocean floor.

As God of horses, Poseidon often changed into the shape of a steed* and his favourite transport was a chariot pulled by horses.

His son was Triton, who was half man and half fish.

Poseidon wasn’t all good. He once cursed the wife of King Minos.

Minos had proved his right to rule Crete by calling on Poseidon to send a bull from the sea, which the king promised to sacrifice. Poseidon sent the bull, but Minos liked it too much to kill it. So Poseidon asked Aphrodite, the Goddess of Love, to make Minos’s queen, Pasiphae, fall in love with the bull. She did and she gave birth to a son — the monstrous Minotaur, which was half-man, half-bull.

Meet the five Goddesses of Mt Olympus in our next story.

plagues: contagious bacterial diseases that kill many, many people

integrity: being honest and have strong morals

sanctuary: a safe place or shelter

deformed: a person or part of the body that is not of normal shape

lame: unable to walk without difficulty

conceived: created when an egg is fertilised

steed: a horse that can be ridden

Part Two: The 12 Olympians and Zeus, King of all Gods

What are the Pythian Games named after?

Name the God of War who didn’t like to fight.

Why is Dionysus often referred to as “of two mothers”?

What musical instrument did Hermes create?

How did Poseidon earn the nickname “Earth Shaker”?

Refer to the accompanying Greek Myths and Legends classroom workbook with 25 activities. Can be purchased for $5 including GST at https://kidsnews.myshopify.com/products/greek-myths-and-legends.

HAVE YOUR SAY: Which God do you like the most? Why?