Why are so many people protesting across the world after the death of George Floyd? 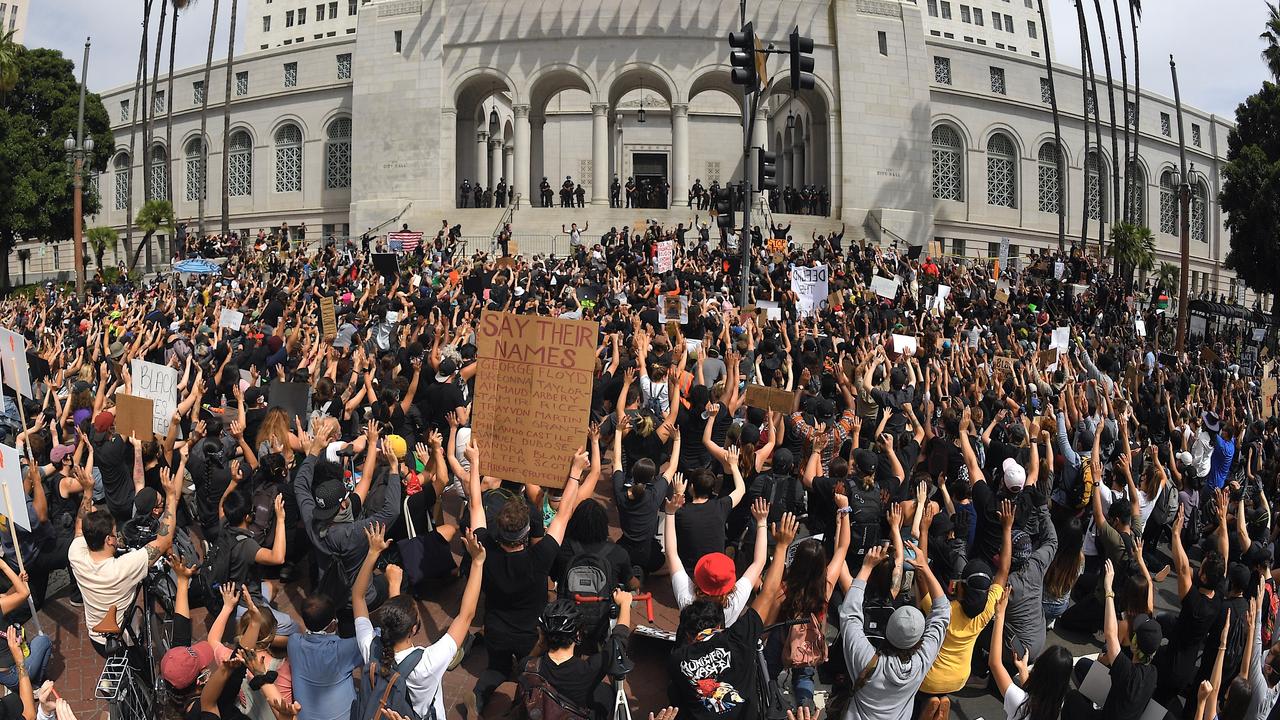 Demonstrators kneel in front of Los Angeles City Hall with their hands up during a protest Tuesday, June 2, 2020, in Los Angeles, US, over the death of George Floyd. Picture: AP

Protests continue across the US and elsewhere around the world over police treatment of black people.

The protests, some peaceful and some violent, began after a black man named George Floyd died after a police officer held him down in Minneapolis, Minnesota, US on Monday, May 25.

On Tuesday, June 1, people marched through Sydney and Perth and protests are planned for other Australian cities.

Kids News explains how the protests began and why so many people are protesting around the world.

If you find this article upsetting, talk about what is upsetting you with an adult you trust or visit or call KidsHelpline at kidshelpline.com.au or 1800 55 1800 at any time for any reason.

GEORGE FLOYD
George Floyd, an unarmed* 46-year-old black man, was arrested after shopping at a store in Minneapolis. The shopkeeper had called police because he suspected the $20 note Mr Floyd used to pay with was fake.

According to witness accounts, video and official statements, police arrested Mr Floyd and then there was a struggle. Mr Floyd died after a white police officer, Derek Chauvin, pressed his knee on Mr Floyd’s neck for more than eight minutes. There were three other police officers nearby.

All four of the police officers involved were fired the next day but it wasn’t until Friday, four days after the event, that Mr Chauvin was arrested for killing Mr Floyd.

THE PROTESTS
Many people saw video taken by several bystanders of the minutes after Mr Floyd’s arrest after these were posted on the internet.

People in Minneapolis began protesting the day after Mr Floyd died about unfair and violent police treatment of people who aren’t white. Soon protests began in other US cities.

Most protests started peacefully, with people marching, holding banners and chanting George Floyd’s name or other things such as “No justice, no peace” and “Defund* the police”. 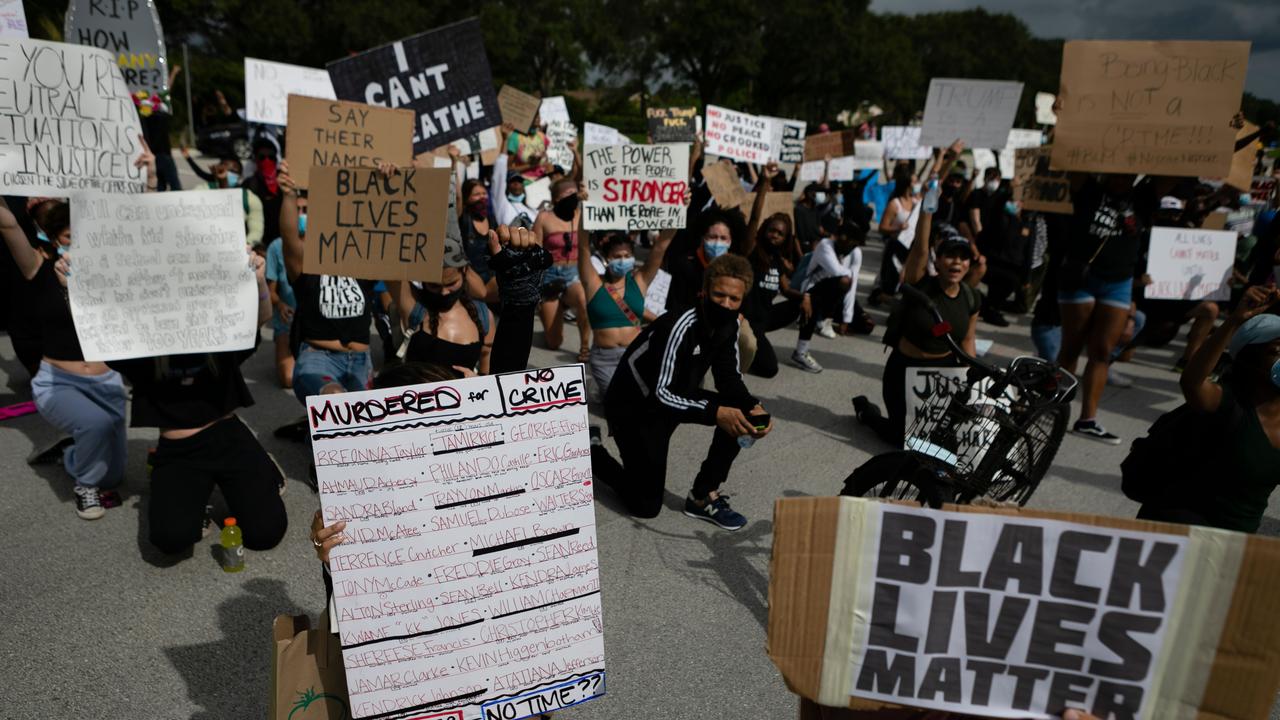 Demonstrators kneel holding signs as they gather for a protest against police brutality and the recent death of George Floyd in Sunrise, Florida, US on June 2. Picture: AFP

Hundreds of people have been arrested while taking part in the protests in the US. 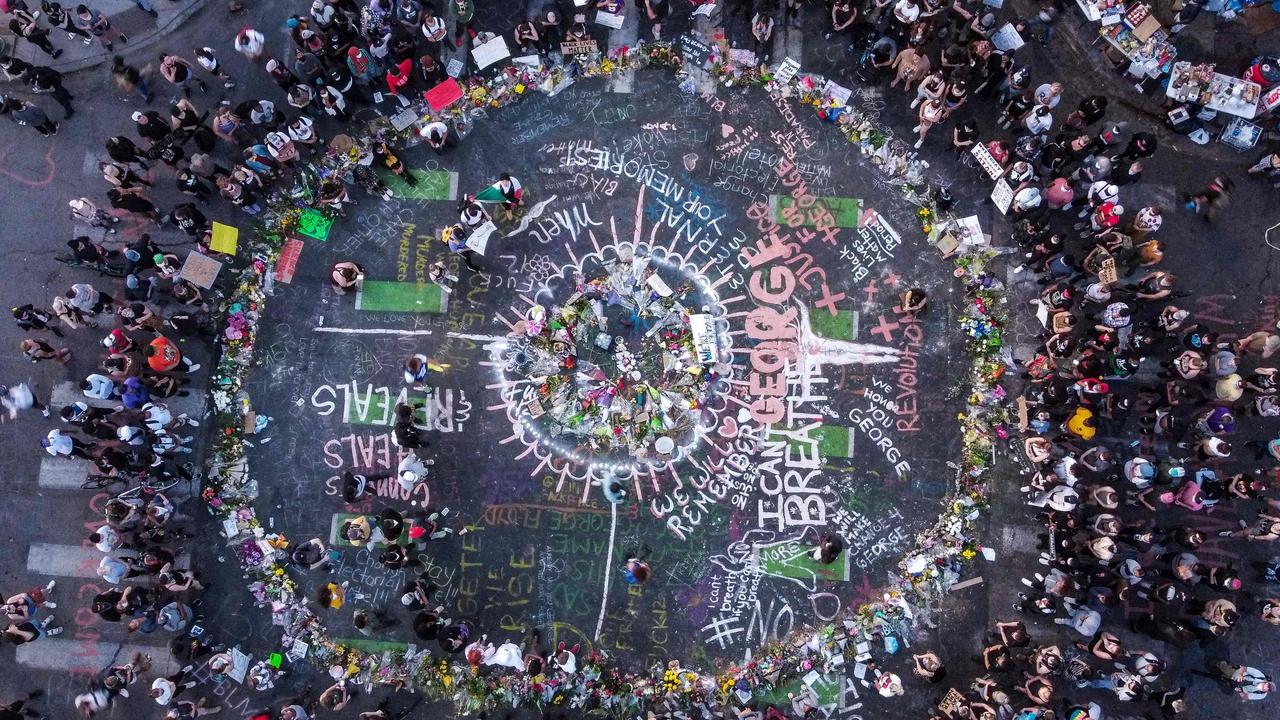 Aerial view of protesters gathered on June 1 near the makeshift memorial in honour of George Floyd marking one week anniversary of his death. Picture: AFP

Several states have called in the National Guard — reserve teams of US Army soldiers — to help control the crowds. Some cities have also set night curfews*, which ban people from going outside while the curfew is in place.

There have been several reports of police officers and National Guard members on duty at the protests kneeling down with protesters to show solidarity*, which means they agree with the protesters and also want change.

There are still many active cases of COVID-19 in the US and there are concerns that so many people crowding together will cause an increase in infection. Protesters and members of the National Guard kneel together during a demonstration over the death of George Floyd in Los Angeles, US on June 2. Picture: AFP RACIAL INJUSTICE
The US, like many countries, has a history of treating people who aren’t white unfairly.

Under US law, everyone has equal rights. In real life, people often have different experiences based on the colour of their skin.

Police are more likely to question or arrest a person of colour, especially black men. In recent times, there have been many other cases of police violence towards black people for little or no reason, sometimes leading to protests. 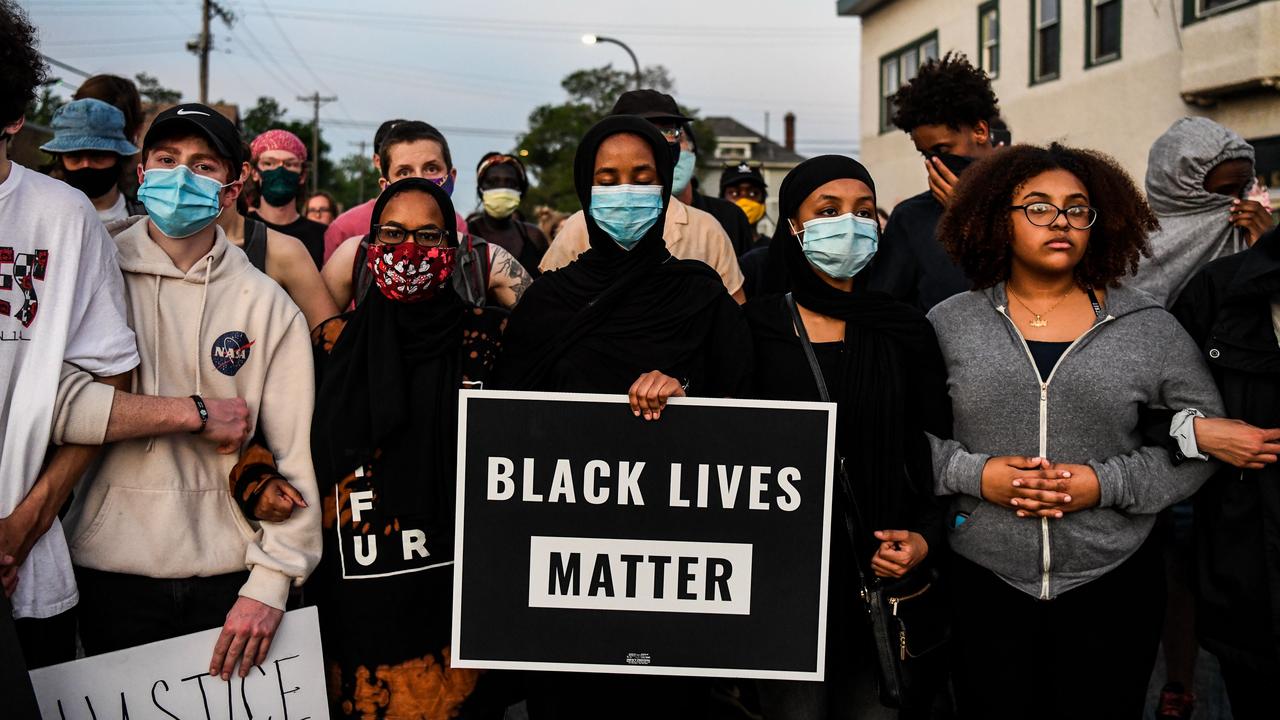 Protesters link arms near the makeshift memorial in honour of George Floyd on June 1 in Minneapolis, Minnesota, US, many wearing masks to help prevent the spread of COVID-19. Picture: AFP 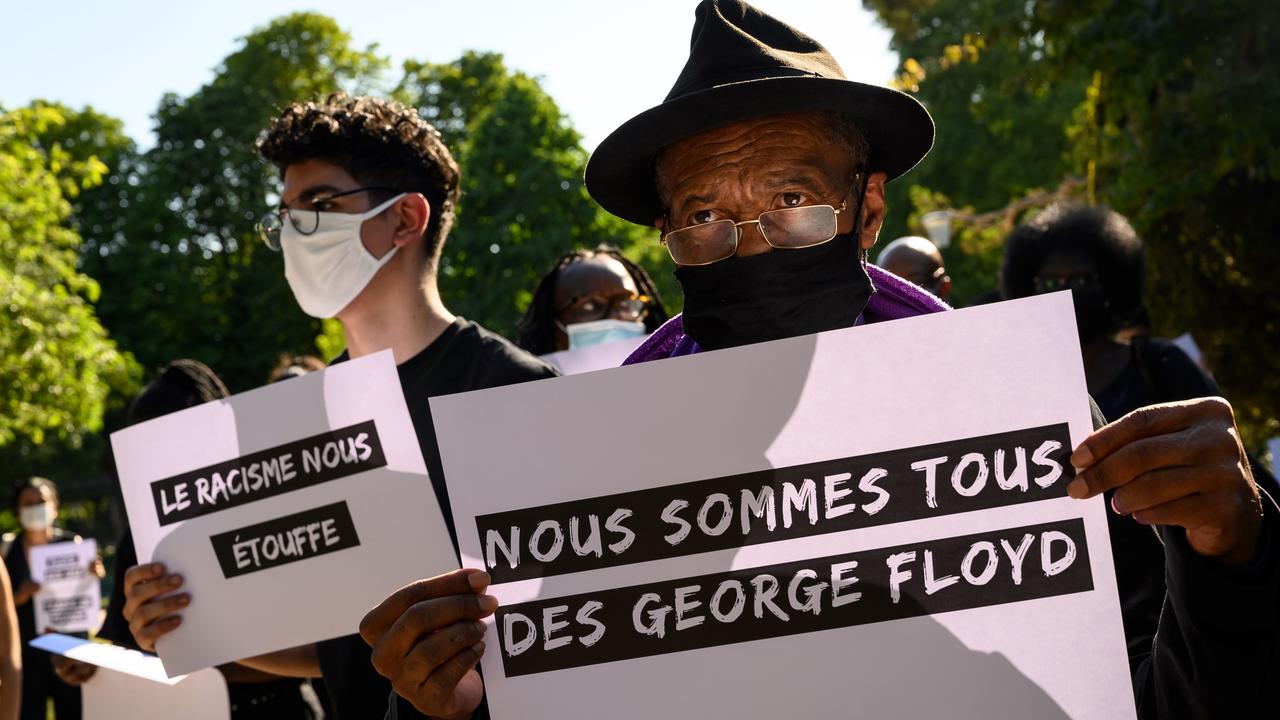 Protesters hold signs in French reading “Racism is suffocating us” (left) and “We are all George Floyd” during a demonstration outside the United States Embassy in Paris, France on June 1. Picture: AFP

PROTESTS IN AUSTRALIA
Tuesday’s protests in Sydney and Perth were peaceful marches. Protesters carried banners with messages such as “Black Lives Matter” and Aboriginal flags. They were showing solidarity with protesters in the US, but also protesting about similar treatment of Aboriginal people in Australia.

At the Perth protest, Aboriginal elders told the crowd they, too, knew of deaths under police watch. The names of indigenous people who have died in custody* were read out during the protest. 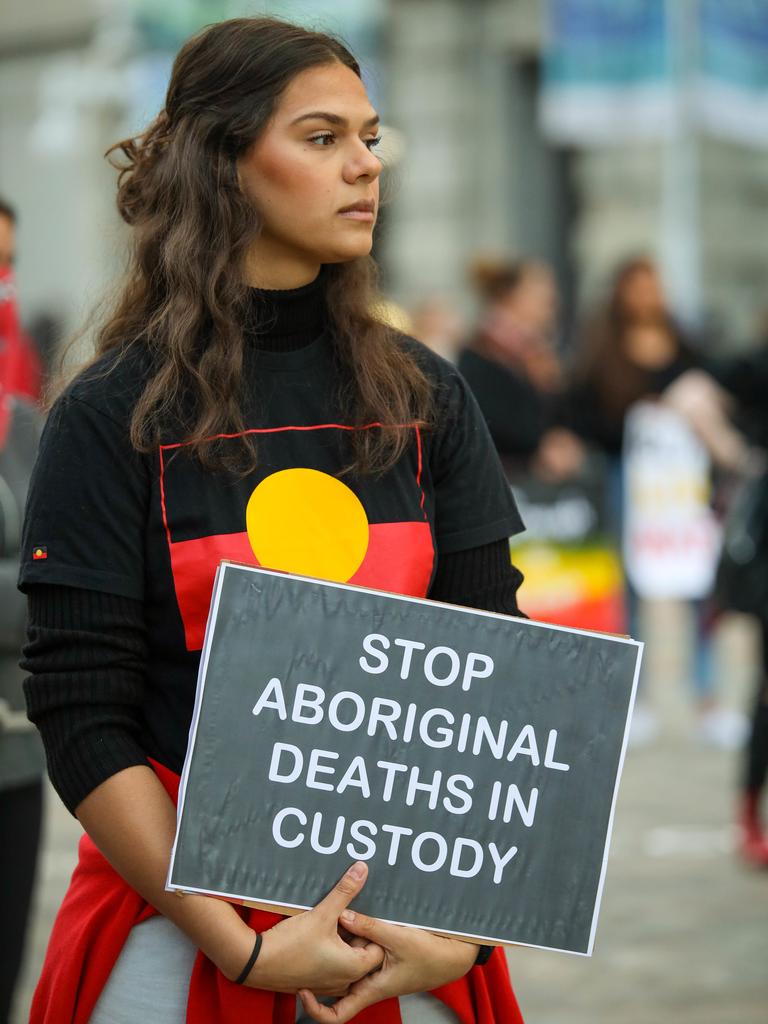 A protester in Perth on Tuesday, June 2, showing solidarity with the Black Lives Matter protests in the US and drawing comparisons to Aboriginal deaths in custody. Picture: AAP

CLASSROOM ACTIVITIES
1. Your opinion
Write a paragraph or more expressing your opinion about what has happened and is happening. Give clear reasons for your opinions. Here are some questions that could help guide you:

What does the death of George Floyd under these circumstances make you think or feel?

Have you experienced or witnessed racism? How did it affect you or others?

Do you think that the protests are justified?

Do you think that burning cars and houses, vandalising property and looting are justified or helpful?

What ideas do you have to help solve the problem of unfair treatment of non-white people by the police and in general?

2. Extension
Peaceful protests are a useful way for the community to voice their opinions. Design a banner that you could carry if you were to attend a protest about this or another cause that is important to you. Your banner may contain words and/or an image but the message should be simple and clear.

HAVE YOUR SAY: Describe your thoughts and feelings about the protests.
No one-word answers. Use full sentences to explain your thinking. No comments will be published until approved by editors.