Mark Knight says Tanya Plibersek has learnt the hard way that calling people names is not on in federal politics any more.

In my political cartoons I often compare politicians to characters in popular books, movies and myths.

The use of popular culture* icons* as visual metaphors* helps make a statement about the politician in question. It helps describe the politician to the reader.

For example, in the past I have drawn Donald Trump as Darth Vader. We all know Vader’s personality, one of ruthless* power, imperious*. So when I put President Trump in Darth Vader’s armour holding a lightsaber I was pasting Vader’s character onto the president and making an association between the two. Anyway, I think Donald Trump would have liked being drawn as the Sith Lord! This week in Australian politics Peter Dutton became the new leader of the Liberal Party which is now in opposition.

When the Liberals were in government, Mr Dutton was seen as the hard man in the parliament. One of his roles was being the Immigration and Border Protection Minister. Australia has had a very firm stance on keeping its borders secure and, at times, some thought these measures were harsh.

But Mr Dutton held firm on the policy and gained a reputation for his resolve* in the face of criticism. But no, I did not draw him as Darth Vader!

What did happen this week was that a member of the new Labor government, Tanya Plibersek, did my job for me, using a visual metaphor to describe Mr Dutton.

Ms Plibersek made a joke about Mr Dutton being the “Voldemort” of the Liberal Party. Harry Potter fans know Voldemort – “he whose name shall never be spoken” – is the arch* bad guy in the Potter series. The blue tinged, bald, gaunt* faced evil wizard gives magic wands a bad name. Peter Dutton is no evil wizard, but he is bald, high cheek-boned and not prone to smiling much for the cameras. As he said of himself, when you are responsible for placing hundreds of asylum seekers trying to arrive by boat in offshore detention, there’s not much to smile about. True.

But Ms Plibersek’s comment made the news and everyone had a bit of a giggle about it. 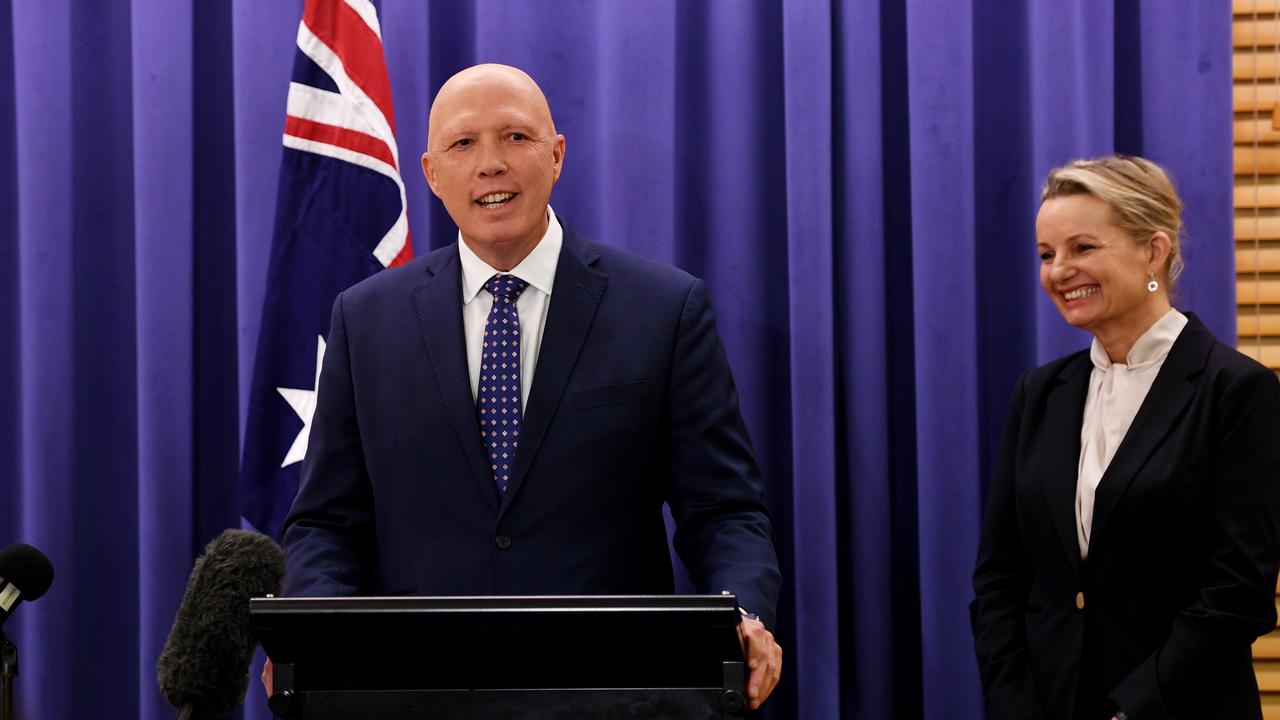 New Liberal Party leader Peter Dutton and his deputy Sussan Ley speak to media after being elected to their roles by Liberal colleagues at Parliament House in Canberra. Picture: Tracey Nearmy

Albo says he wants to change politics in Australia. He wants to move on from the destructive adversarial* style and move to something more constructive*. Calling your opponents names was out.

The PM asked Ms Plibersek to apologise to Mr Dutton, which she did. So I drew a cartoon about the event. Peter Dutton is fabulous to draw and so I took up my pen with relish!

I decided to use a multi-framed comic strip style cartoon.

I started with Ms Plibersek’s name calling. Then Mr Dutton, as Voldemort, waving his wand and turning her into a frog, as wizards do. Then Albo telling her that is not how we play the game these days, so it’s time to kiss and make up. In the final frame, Ms Plibersek turns back into herself, after having been kissed by Mr Dutton, and promises to never do it again.

I guess what I’m trying to say is that when you call people names it usually reflects badly on the person doing the name calling.

Mr Albanese wants the new parliament to move away from the schoolyard style of behaviour. There will be no more name calling.

Let’s see how long that lasts!