Security agents fail to protect the Prime Minister, Scott Morrison, from the great harm of playing a ukulele and singing on national television in Mark Knight’s cartoon.

When politicians hit the campaign trail*, a switch inside their head flicks to election mode and strange things start to happen.

They can be seen walking through shopping centres shaking hands and kissing babies. You will often see them wearing hard hats and high vis vests, pointing at holes in the ground. They make outrageous promises a lot too.

In the last week we have seen the Prime Minister, Scott Morrison, behave a little strangely.

Just recently he was spotted in a hairdressing salon behind the basin, washing a woman’s hair in front of the TV cameras and newspaper photographers. The Prime Minister tries his hand at hairdressing for the cameras on a recent visit to a salon in the Melbourne suburb of Mount Eliza. Picture: Andrew Henshaw

Is hairdressing his new side hustle*, I thought? Are we paying him enough?

Turns out it was an election campaign photo opportunity.

The public’s reaction to it was not that favourable. It was seen as weird to have the PM running his chubby fingers through some woman’s hair. I have to agree.

But that did not dissuade* the Prime Minister of Australia from venturing into the world of election campaign stunts yet again!

It was during a 60 Minutes interview at his family home. We were being given an exclusive look into the private life of the Morrison family and a glimpse of what a regular guy our Scott is.

All was going well until ScoMo pulled out a ukulele* at the dinner table and began to attempt to play the 1977 hit song “April Sun in Cuba” by the band Dragon. I felt for his two young daughters sitting at the table. 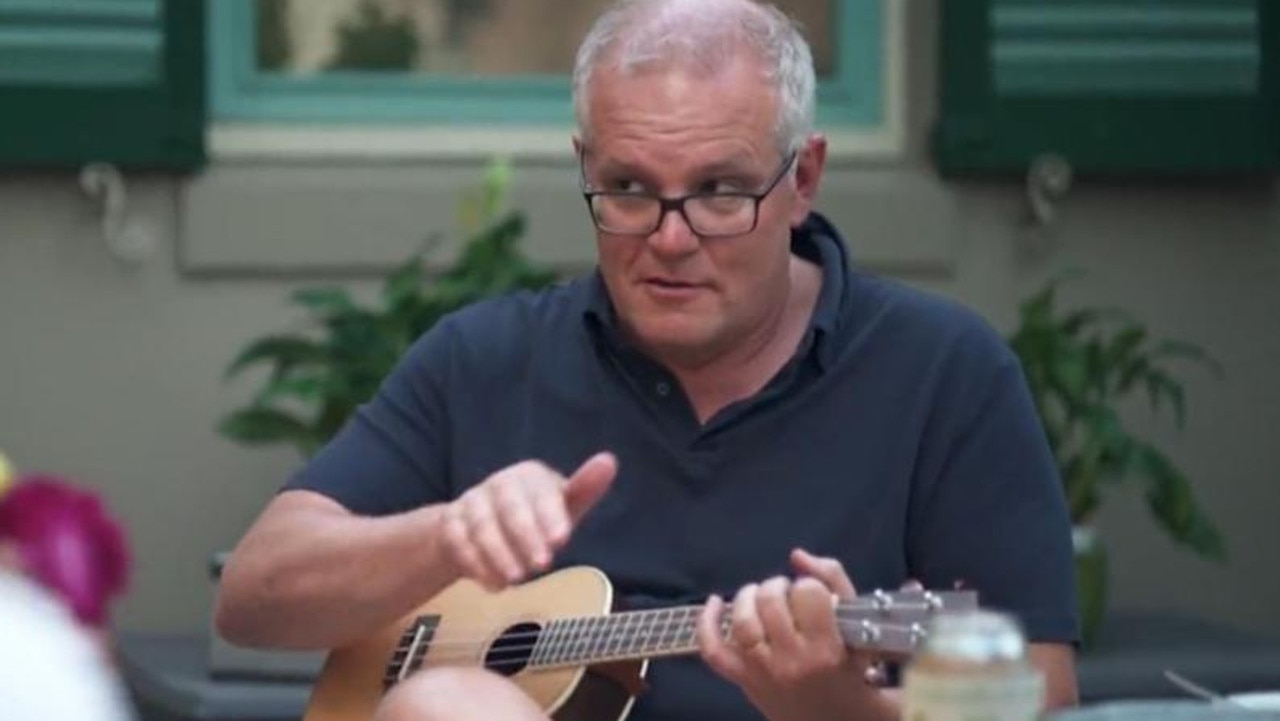 Prime Minister Scott Morrison strums his ukulele at the family dinner table during an interview for television program 60 Minutes.

Todd Hunter, an original member of the band, politely commented on the PM’s “reharmonisation*” of the song. Ouch!

This called for a cartoon! The first thing I did was to start sketching the Prime Minister playing a ukulele. He’s a big bloke and it is quite humorous to draw his big paws holding this tiny little instrument.

The political significance of playing a ukulele was not lost on a public still getting over the 2019-20 bushfires. We all recall at the time that despite the growing fire danger, the Prime Minister took his family overseas for a vacation in Hawaii.

Photographs of the east coast of Australia going up in flames as the leader of the country holidayed overseas did not go down well.

The ukulele is synonymous* with Hawaii and Mr Morrison playing it on national television reignited anger over his absence during a national crisis.

And then there was the daggy dad thing. People felt ScoMo was overdoing that a bit.

As an election approaches Australians are looking for strong leadership after two years of the Covid pandemic, lockdowns and total upheaval in their lives – not ScoMo butchering a classic Aussie hit song!

So the verdict was that the uke copped a public rebuke*. Having drawn ScoMo strumming away, I wondered what my punchline* would be?

The event had not helped the PM’s cause, in fact it may have hindered it. How could I illustrate this in a humorous way?

I thought about the PM’s security officers from the Australian Federal Police. They are the agents that you see around the PM when he is out in the public. They have those earpiece things and wear dark sunglasses. Their job is to protect our leader, to keep him safe from harm. In movies you see them leaping in front of crazed gunman or terrorists. I wondered if I could use them here?

That ukulele did quite a bit of damage! So I started to sketch Federal Police officers diving towards the Prime Minister to defend him from harm; trying to get that ukulele from his grasp before he strummed that first fatal chord!

Alas, as the cartoon shows, they were too late and he strum-bled (that’s a word I just invented) his way through the chorus as a nation screamed. Damage done.

The cartoon seeks to show how some election campaign stunts can backfire. Ukuleles are now on the prohibited* weapons list.

Greta comes to the rescue again

Jane’s V the sign of a little victory for science

CLASSROOM ACTIVITIES
1. What happens next?
Imagine this cartoon is part of a story that is made up of three cartoons. The three cartoons tell a complete story, and Mark Knight’s cartoon is the start of the story. Think about what the story could be and draw the next two cartoons that tell the story.

2. Extension
Being able to draw is only one of the skills needed to be a great cartoonist. Write a list of all of the other skills that you think cartoonists like Mark Knight need to do their job.

VCOP ACTIVITY
Imaginative dialogue
Imagine you were there during the event portrayed in Mark Knight’s cartoon.