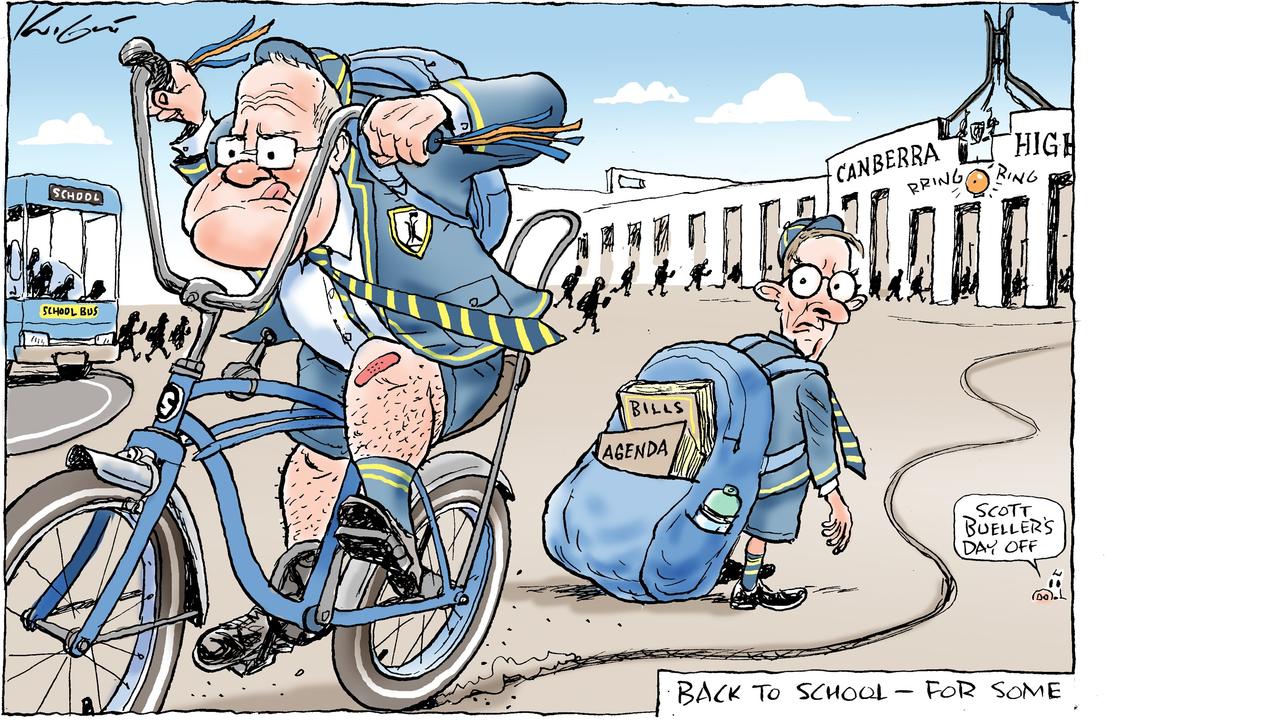 The start of a new parliamentary term is like the first day of school, according to cartoonist Mark Knight, but not everyone was there when the roll was called.

I’m always interested in what school students think when they visit the nation’s capital and federal parliament.

Often these excursions see them attending Question Time in the House of Representatives and watching the politicians at work.

The behaviour of the MPs* on the floor of the house often makes me wonder who actually are the schoolchildren here?

The name calling, interjecting*, heckling* and poor behaviour by the politicians, not to mention the Speaker* trying to bring “order” to what seems at times like an out of control school classroom, makes even the most challenging school kids look like angels! When I first attended parliament I saw with my own eyes the playground antics* during Question Time. From then on, when parliament returns or a new government is elected I have drawn a cartoon about “Back to school” for the nation’s parliament.

Parliament House, that big gleaming building overlooking Lake Burley Griffin, has become Canberra High School in my cartoons. I have drawn the Prime Minister of the day as the head prefect*, and instead of suits I’ve drawn the politicians in school uniforms. I have even created a school bus to transport them all to the parliament.

They have never let me down behaviour wise and the cartoons have been a lot of fun over the years. Question Time take place in the House of Representatives, with the Prime Minister and his team on the left, the Opposition on the right and new Speaker Milton Dick at the head of the chamber. Picture: Getty Images

This week all the politicians were heading back to Canberra, with the newly elected Albanese Labor Government having its first sitting. The Liberal and National Party Coalition were on the opposition benches for the first time in 11 years.

It was a good time to draw another back to school cartoon!

The idea behind this cartoon was that new PM Albo has a lot on his plate heading into this parliamentary term: inflation and the cost of living, a huge budget debt, climate change, the war in Ukraine, and China are just a few of the pressing issues his government has to deal with. Prime Minister Anthony Albanese speaks during Question Time. The 47th parliament is sitting for the first time this week following Labor’s victory over the Coalition at the federal election on May 21. Picture: Getty Images

So I imagined Albo arriving at Canberra High with a huge school backpack filled with text books and notebooks, symbolising the massive agenda* at hand. I’ve seen students staggering to school with these backpacks laden with what looks like bricks, including my own kids. This is the heavy burden of office for PM Albo, the new head prefect.

I also heard that former Prime Minister Scott Morrison would not be there for the first week of the new parliament. It looked like sour grapes* having lost the election, but apparently he had to attend an overseas conference for former PMs*.

To me it sounded like a losers’ club, but that was his excuse for not attending. A note from his mum might have been more believable.

So in the cartoon, as everyone is heading into class for the start of this crucially important term, ScoMo is on his pushbike and pedalling out of Canberra High’s front gate as fast as he can!

Having been in charge only a few short months ago, ScoMo the former head prefect is not sticking around and everything is now in the hands of the new kid and new head prefect of Canberra High, Albo.

He’s got a lot of homework ahead of him!

CLASSROOM ACTIVITIES
1. Write the script
Write a script for a short play called First Day Back at Canberra High.

Your play starts with the scene in Mark’s cartoon. Use Mark’s ideas in the story to help you. Use your research skills to find out what happens on the first day of Parliament for more ideas.

Your purpose is to help kids learn about what happens Parliament in a fun way.

2. Extension
What would happen if the kids from your school took over the Parliament to run the country for a week? Imagine that this actually happened. Write a Kids News story about the week.