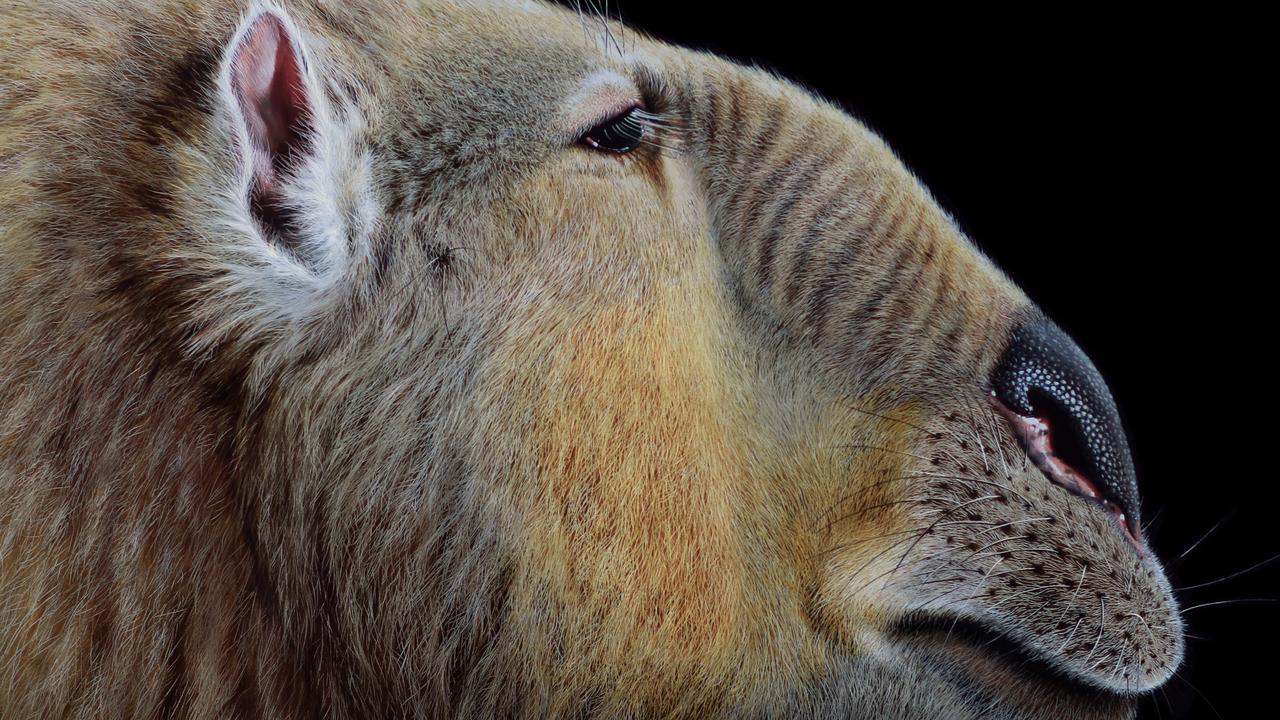 A drawing of Palorchestes azael, whose fossils is one of eight nominated to become the fossil emblem of Victoria. Picture: Museums Victoria

Australia’s states have traditionally adopted emblems to represent their local plants and animals. But now some states are also adding a fossil emblem.

Victoria, too, has just launched a public vote to select an official state fossil, with eight fossil specimens in the running to become the emblem.

The eight fossils, short-listed by Museums Victoria palaeontologists*, include a crocodile-like Cretaceous* amphibian* with a head shaped like an old fashioned rubbish bin lid and a mouth containing dozens of ridged fangs. A drawing of Koolasuchus cleelandi shows it poking its rubbish bin lid-shaped head out of the water. Picture: Museums Victoria

This creature, called Koolasuchus cleelandi, lived about 125 million years ago. The fossil was found near San Remo in southeast Victoria. This fossil of the jaw of Koolasuchus cleelandi was found on Rowell’s Beach near San Remo, Victoria. Picture: Museums Victoria

Another candidate is Palorchestes azael, an unusual marsupial* that was heavier than a buffalo and lived 10 million years ago until as recently as 40,000 years ago.

Palorchestes’ teeth and jaws looked like those of a giant kangaroo, but it was more closely related to wombats. This fossil of Palorchestes azael show its teeth and jaws were like those of a kangaroo even though the marsupial was more closely related to wombats. Picture: Museums Victoria

The best-known fossils of Palorchestes come from limestone caves from Strathdownie in the west of Victoria to Buchan in the east of the state.

Other fossil emblem candidates include Janjucetus hunderi, a small but fierce whale that lived 25 million years ago off the Victorian coast, and Leaellynasaura amicagraphica, a small plant eating dinosaur from the Early Cretaceous period. Leaellynasaura was found in Dinosaur Cove, near the Great Otway National Park. It was named after the daughter of palaeontologists Tom Rich and Patricia Vickers-Rich and is one of the few dinosaur species to be named after a female. The skull fossil of Leaellynasaura amicagraphica was named after the daughter of the palaeontologists who discovered it at Dinosaur Cove. Picture: Museums Victoria

Western Australia became the first state to adopt a fossil emblem when it proclaimed* the Gogo fish Mcnamaraspis kaprios in 1995.

Museums Victoria chief executive and director Lynley Crosswell said: “We know from our visitors that people of all ages are intrigued* by fossils. Our experts have selected eight remarkable specimens from among more than 4 million fossils in the state palaeontology collection – now it’s everyone else’s turn to choose their favourite to be immortalised* as Victoria’s fossil emblem.”

After the public vote, the winning fossil will be submitted to the State Government for official approval as the state’s fossil emblem.

Victorians have until October 4 to vote for their favourite fossil at museumsvictoria.com.au/melbournemuseum/state-fossil-emblem

CLASSROOM ACTIVITIES
1. Which fossil will you choose?
Read about the fossils that Victorians can vote for. Which one do you think should be the state’s fossil emblem? Choose the fossil you think deserves this honour. Write sentences explaining why you chose it.

VCOP ACTIVITY
1. Remember the dinosaurs!
Being immortalised in an emblem is a pretty cool feat, especially when the creature hasn’t roamed earth for millions of years. So what’s the point of it? Why make a fossil an emblem?Write a paragraph explaining why you think a fossil is being made into an emblem, and why each state will have their own one instead of one for the whole of Australia? See if you can use information from the article to further explain your understanding.