New South Wales Premier Gladys Berejiklian has called for a change to the lyrics* of the national anthem to better acknowledge Australia’s proud Indigenous history.

On the eve of round two of the NRL State of Origin, the Premier threw her support behind a push to change the anthem so it declares “we are one and free” instead of we are “young and free”.

The question of a lyric change is gaining increasing attention, as multiple Indigenous NRL players refuse to sing the anthem saying it does not reflect their story as First Nations people.

Ms Berejiklian said she believed the change would “make such a difference” and called for a national discussion on the topic.

“I love our national anthem. I get goose bumps every time I hear it sung or played, but think one word change will make such a difference,” Ms Berejiklian said.

She pointed out the anthem had been changed in the past.

“As a very young schoolchild I remember learning “Australia’s sons let us rejoice*”.

“Today we sing “Australians all let us rejoice”,” she said.

“Similarly I believe singing we are “one” and free rather than “young” and free will acknowledge our proud Indigenous history.

“There should be a national discussion on this involving all Australians including Indigenous Australians.”

She wants the anthem to be inclusive and has been considering the issue for some time. Ms Berejiklian decided to speak out because she felt passionately about wanting to support Indigenous communities.

It was weighing on the Premier that she felt upset for people who didn’t feel included in the anthem, such as on sporting fields.

“I’m so proud of our first nations people and our Indigenous players – I don’t want them to feel they aren’t included. Dignity and respect goes a long way.” 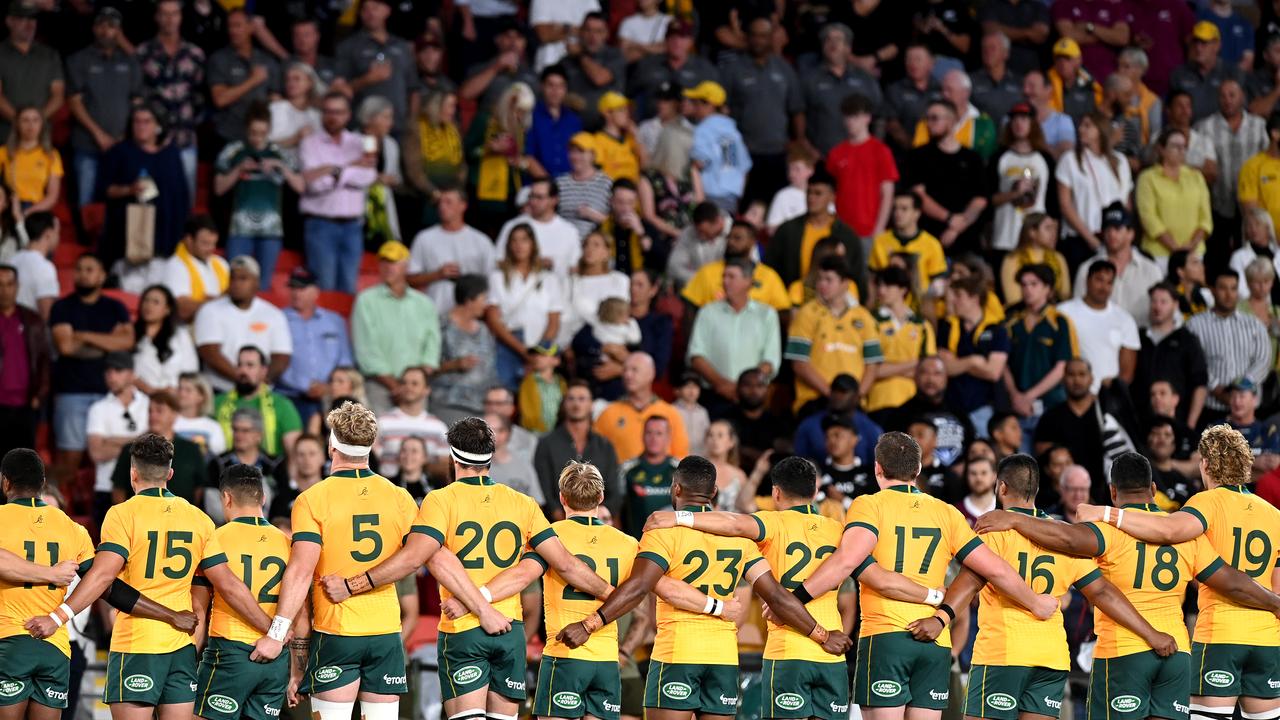 The Wallabies players embrace during the playing of the Australian national anthem before the 2020 Tri-Nations match between the Australian Wallabies and the New Zealand All Blacks at Suncorp Stadium on November 07, 2020 in Brisbane, Qld. Picture: Getty Images

The Premier’s own pride in her Armenian background, and knowing what it is like to feel injustice* also informed her view.

“I’m incredibly proud of my heritage and know what it’s like to feel injustice,” she said.

“We’re all Australian and we all need to come together, no matter our background and heritage, that’s what makes Australia and NSW what it is.”

She is conscious that others will have a different view – some will say it doesn’t go far enough, others will say it’s too radical* – but felt the matter was important enough for her to take a stand on.

Indigenous advocate* Warren Mundine also backs a change to the anthem, saying it was a step to unite the country.

“It’s about uniting people – that’s what the national anthem is about,” he said.

“This is not about bowing* to radical elements* – it’s a commonsense approach to bringing people together.”

Mr Mundine proposed going further and singing the second verse of the anthem in a local Aboriginal language. NSW Labor leader Jodi McKay said the Premier backing a one-word change to the national anthem was “fine”, but downplayed the move’s significance.

“But wouldn’t it be terrific if in Naidoc Week, Gladys Berejiklian committed to flying the Aboriginal flag permanently on the Harbour Bridge,” Ms McKay said.

“It does however distract from actual reform like self determination, land, ending the stolen generation and stopping police brutality,” he tweeted.

“I don’t think the writers of this anthem when they say “young” are intending any kind of offence here,” he told the Today Show.

“We are a young nation. We have old civilisations and we have a rich history over tens of thousands of years but we are a young country. As a country, as a concept of Australia.

“I think it is another example of people taking offence when there was no offence intended. That is an unfortunate tarnishing of our forefathers* and foremothers*.”

CLASSROOM ACTIVITIES
1. Rewrite the Anthem
The lyrics for the Australian national anthem are below. Work in a group of 3-4 to make some changes or rewrite a verse as you see fit to appropriately knowledge our rich Indigenous history.

Australians all let us rejoice,

For we are young and free;

Our home is girt by sea;

Our land abounds in nature’s gifts

Of beauty rich and rare;

In history’s page, let every stage

In joyful strains then let us sing,

Beneath our radiant Southern Cross

We’ll toil with hearts and hands;

To make this Commonwealth of ours

Renowned of all the lands;

For those who’ve come across the seas

With courage let us all combine

In joyful strains then let us sing,

2. Extension
Do you think the NSW Premier’s change of wording is a fair request? She wants it to declare “we are one and free” instead of we are “young and free”.

What difference does this change of wording reflect do you think?

How else could we make our Indigenous history more visible and inclusive?

HAVE YOUR SAY: Should the anthem be changed? What changes would you prefer?
No one-word answers. Use full sentences to explain your thinking. No comments will be published until approved by editors.