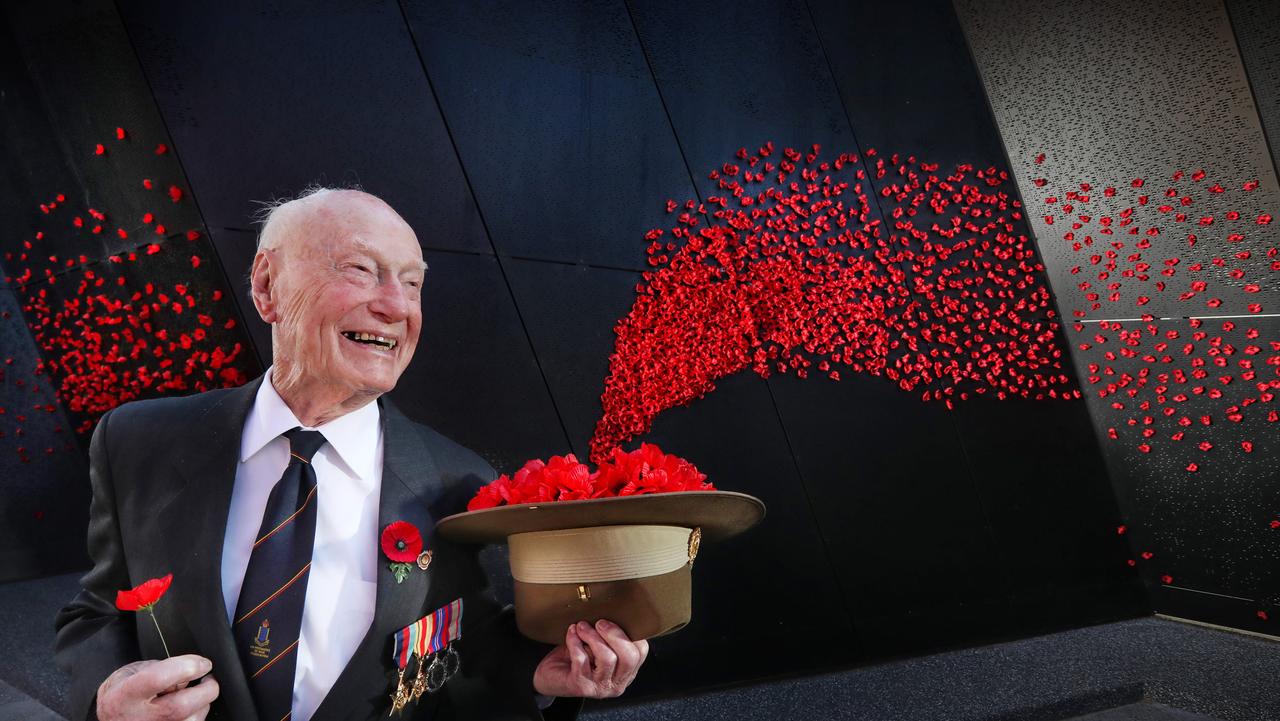 99-year-old WWII POW Jack Bell at The Shrine of Remembrance in Victoria, with the wall of poppies for Remembrance Day. Picture: Alex Coppel.

Millions of people around the world will stop for one minute of silence tomorrow to commemorate* those who fought and died in conflicts since World War I.

Remembrance Day is held on November 11 each year, the same date the war ended.
Tomorrow will mark the 102nd anniversary of the Armistice, which is the written agreement to end the war in 1918.

Australians will observe one minute of silence at 11am, the time when both sides signed the ceasefire document and the fighting stopped. Grace, 8, wears a traditional poppy on her hat as she plants a poppy at the Shrine of Remembrance.

More than 60,000 Australians died during World War I.

People traditionally* wear red poppy pins on their jackets and hats in the lead up to Remembrance Day.

The remembrance poppy was inspired by Canadian Lieutenant Colonel John McCrae’s poem written in 1915 called In Flanders Fields.
His poem describes the poppies growing in the churned* soil of the battlefields of Europe.

They are now used as a symbol to remember soldiers killed at war and pins are sold to raise money for returned soldiers. They are also sold and worn on Anzac Day.

Wreaths will be laid at the Remembrance Day National Ceremony in Canberra and other cities and towns will hold their own services. Ceremonies are a chance for returned service people, their friends and family and the general public to reflect on war and thank those who gave their lives for the country.

The Last Post bugle* call will be played at ceremonies. The Last Post was played during the war to signal that the night sentries were alert at their posts and gave one last warning to the other soldiers.

The tune was eventually incorporated into funeral and memorial services as a final farewell, and symbolises the duty of the dead is over and they can rest in peace.

Armistice Day marks 100 years since the end of WWI

Anzac Day explainer: The dawn of the legend

Veterans go ‘back to hell’ through VR films

CLASSROOM ACTIVITIES
1. Remembrance Day
Draw a large outline of a poppy that fills at least half an A4 page.
In the centre of the poppy write Remembrance Day.
On each petal write facts about Remembrance Day.
Make sure you include what the day is about, when it is, why it is observed and who commemorates this day.
Include anything else you think is important.

2. The Last Post
The article mentions that the Last Post will be played at ceremonies.
What is it?

Research what the Last Post is and why it is played at Remembrance Day ceremonies.

Write a short paragraph explaining the significance of this piece of music.

3. Acrostic Poem
Use the name Remembrance Day to write an acrostic poem about the significance of the day.

Begin by writing the letters down the side of your page.
Then use each letter as the first letter of the line.
You can use single words or short phrases.
Example:

VCOP ACTIVITY
VCOP everything
Create a tally of the VCOP included in this article.
On some paper, draw four columns with the headings Vocabulary, Connectives, Openers and Punctuation.

Highlight the VCOP in the article and tally each element you find.

Extension: Create a graph displaying the data you have discovered! What VCOP is present the most throughout the article?

HAVE YOUR SAY: How will you commemorate Remembrance Day?
No one-word answers. Use full sentences to explain your thinking. No comments will be published until approved by editors.