Few children have enjoyed the postman’s arrival more in recent times than one class in faraway Woodville Primary School in the UK, who recently received a bundle of Australian sunshine from students at Arndell Anglican College in NSW.

Taking part in the first ‘Sunshine Initiative’, the Arndell students signed up to B Kinder Day 2021 and used their official kindness cards to lift the spirits of students whose Covid-19 lockdowns and pandemic experience overall has been so much more severe than their own.

Australian school students are invited to spread their own sunshine to fellow students around the world – and while B Kinder Day is June 22 each year, the cards can be sent to children who could use some cheering up at any time throughout the remainder of the year. After a difficult 15 months throughout the pandemic, Woodville Primary School students in the UK open up their B Kinder ‘sunshine’ cards from students at Arndell Anglican College in Australia. Picture: supplied.

The Sunshine Initiative as part of B Kinder Day is the idea of Danny Mayson-Kinder, who started the children’s charity Fly High Billie after tragically losing her 12-year-old daughter Billie Kinder in a 2016 equestrian accident. With a play on Billie’s first initial and surname, B Kinder Day has grown into a significant charitable legacy* of the lion-hearted little girl known for her exceptional empathy and kindness.

B Kinder Day is Fly High Billie’s annual awareness and fundraising initiative, with the charity’s beautiful selection of cards featuring Billie’s own artworks available to participating schools so that children can write and send the cards around June 22.

For Billie’s mum, empowering* other children to make a difference through the cards, encouraging the expression of their innate* compassion* and goodness, is aimed at reducing such grave challenges as Australia’s youth mental health crisis, schoolyard bullying and youth suicide. 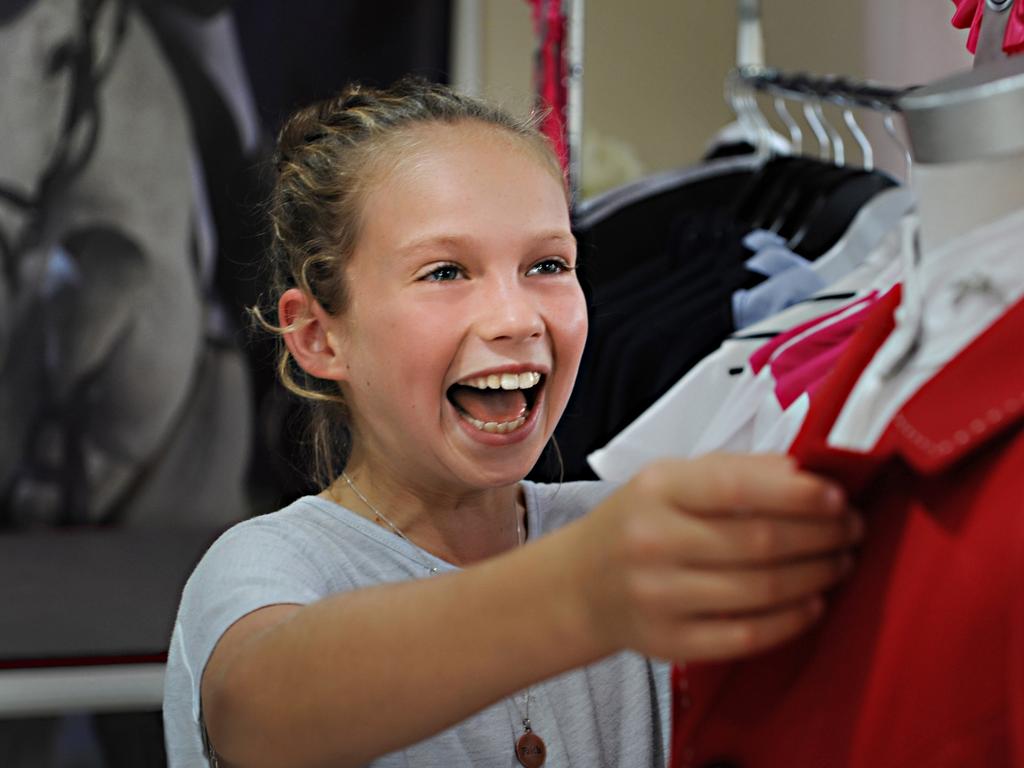 B Kinder Day on June 22 honours the life and memory of Billie Kinder, who tragically died aged 12, by encouraging children to spread kindness, empathy and compassion. Picture: supplied.

While cards can always still be circulated within a school or local community, the idea of directing this year’s B Kinder Day cards into Covid-19 hotspots to spread a little light around the world came to Mayson-Kinder as Australians limped toward the end of 2020.

“Australian schoolchildren have not been as severely affected by the Covid pandemic as children in the UK,” Mayson-Kinder said.

“Arndell’s students were asked what they thought it would be like for their peers in the UK (and) they were encouraged to empathise with them by trying to imagine how it would feel to have been in an extended Covid-19 lockdown during a long dark cold winter, unable to go to school or see their friends and families.

“Arndell Anglican College students decided they would like to reach out across the world with their messages of kindness. The concept was to send ‘a ray of sunshine, one kindness card at a time’.” Keith Petersen, principal junior school, Arndell Anglican College. Arndell students sent cards from Australia to Woodville Primary in the UK to cheer up the students there after a tough time through Covid-19. Picture: supplied.

Keith Petersen, deputy headmaster, head of junior school at Arndell, said the B Kinder Sunshine Initiative was all about the students in Australia looking to find a real way to communicate their care and concern.

“(Sharing) their child-to-child empathy, encouragement and friendship with students in the UK, returning to school after a very long Covid lockdown,” he said.

“The students at Arndell used the wide variety of B Kinder Day cards to send a message of reciprocal* understanding – a message (shining) with Australian brightness – hoping that the friendships offered would open windows of kindness and make new relationships of ‘sunshine’: a line of sparkling light, crossing continents and joining hearts in kindness together.”

Peterson said it was “a very worthwhile exercise which the children have really benefited from and thoroughly enjoyed.”

Geoff McNab, a teacher at Arndell, said the B Kinder Day initiative was “the most impressive and moving school and class event that I have witnessed in my 18 years as a teacher.”

Timothy Refalo, a year 3 student at Arndell, said he liked that his card was being sent a long way away. Timothy Refalo with his B Kinder card before it was sent to the UK. Picture: supplied.

“I could be nice to someone I didn’t know and help them feel happy again after lockdown,” he said.

“I felt that I could make another child like me happy on the other side of the world by sharing Billie’s gift of giving,” she said.

Lily Meredith, a year 5 student at the school, said: “It felt very good that I could write to someone in another country who was going through Covid and difficult times and share with them that we had gone through this too, so that they would not feel so alone but feel more confident and cheered up.”

Woodville students were filmed opening the cards so that their Australian pen pals could later see the impact of their kindness. Woodville’s Principal Sarah Turner said students hope to develop an ongoing pen pal relationship with Arndell.

“The children were thrilled to think that someone was thinking of them from Australia,” she said. “Woodville pupils can’t wait to see the reaction as their cards are opened by Arndell students.” 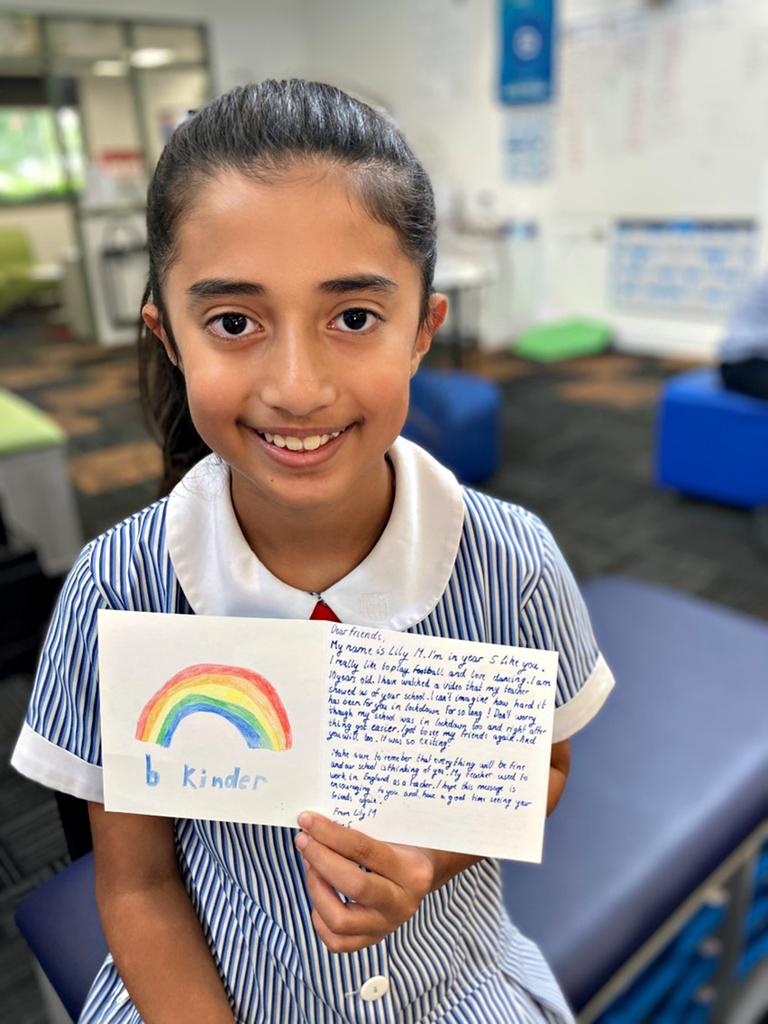 Lily Meredith with her B Kinder card. Picture: supplied.

ABOUT B KINDER DAY

CLASSROOM ACTIVITIES
1. B Kinder Day
Design a bright and cheerful card that could be used for B Kinder day this year. Choose someone you would like to write a heartfelt message to, to brighten their day/week/year! It could be a Victorian school student currently in Covid lockdown, a child in hospital, someone that may be lonely or going through a difficult time.

Write your card out and ask your teacher or parent to send off around June 22nd for B Kinder day.

If you wanted to send more of these cards you could buy them from flyhighbillie.org to raise money for this charity.

2. Extension
Work in small groups to put together a plan to hold a fundraising day or activity for the Fly High Billie charity or to celebrate B Kinder day on June 22nd. If you visit flyhighbillie.org they have some ideas and resources, or you can come up with your own ideas.

Write your plan out and make a time to meet with the principal if it’s something you’d like to help organise.

VCOP ACTIVITY
B-Kinder Initiative
June 22nd is B Kinder Day, but why should we limit acts of kindness to just one day? In fact, we think we should start practising now so we are ready for B Kinder Day.

We want to challenge you to complete five days of RAK (random act of kindness) in one week either at school or at home to support the Fly High Billie initiative. Now, that might sound pretty hard, one RAK a day, so the challenge is for your class, not you individually.

Sometimes it can be hard to even think of something you could do that might be considered kind, so we have come up with five different acts of ‘Kid-ness’ (kindness by kids) to turn B Kinder Day into World Kid-ness Week!

Pick one of the RAKs to complete and try and keep it a secret until it’s completed (it only works if people aren’t expecting it).

Then see if you can complete it before the end of the week. Let your teacher know when you have completed your RAK by writing what you did on a note with the date and your initials. Ask the teacher on Friday or next Monday to add up all the notes to see how many RAKs were completed by the class in the week. Maybe you would like to complete more than one?

Remember VCOP is not just about writing, it’s about talking too. So we picked RAKs that are spoken or written. But maybe you would like to write your own to add to the list?