Every four years Americans go to the polls in November to vote for the next president of the United States.

There are two main political parties: the Republicans and the Democrats. The current president, Donald Trump, is from the Republican party and he is seeking a second term.

Presidents can only serve two terms in office under the US constitution* and while most do win a second term, it is not a given, and so we are about to see if Mr Trump, one of the more controversial presidents, can win again.

I would love to see Donald Trump returned as president, but I’m a cartoonist, and because he is such a maverick* as leader, he provides me with plenty of material for my political cartoons!

But putting my self interest to one side, it will be up to the American people to decide on November 3 if they want Mr Trump or Democrat Joe Biden to lead them for the next 4 years.

This week the Democratic party endorsed* Mr Biden as its candidate. It signalled the start of the last phase of the election campaign as the two leaders go head-to-head, and so I decided to draw a cartoon about it.

Also this week, the Democrats endorsed Kamala Harris as Joe Biden’s vice presidential candidate, the first female of colour to run for the position. She would have to be in the cartoon as well, I figured. I love sporting analogies* to describe political contests because most people usually barrack for one political party their whole life, a lot like how we might support a footy team. It’s their side and they’ll stick with them through thick or thin!

One of the most popular sports in America is baseball. I imagined the Republicans and Democrats fighting out the presidential contest on the baseball field.

I started to draw Donald Trump, the incumbent* President. He is wearing the traditional baseballer’s outfit and is pictured stepping up to the plate with bat in hand ready to take a swing at whatever his opponent, Joe Biden, can throw at him.

Behind Trump is Kamala Harris as Biden’s backstop, which in reality is a job every vice president has to do for their leader. Back them up.

Standing behind the backstop in baseball is the umpire who is in charge of the game. So in the cartoon I have drawn the Statue of Liberty officiating*. A symbol of America’s democracy, I thought Liberty was a good choice as ump.

The last person to add was Joe Biden, the Democrats leader. He would be pitching. And again in reality that is what he is doing during the election campaign, making his pitch to the American people on why they should vote for him to lead their country. Kamala Harris has been chosen as the Democrats’ candidate for the role of vice president and is running with Joe Biden against Donald Trump. Picture: Drew Angerer/Getty Images/AFP 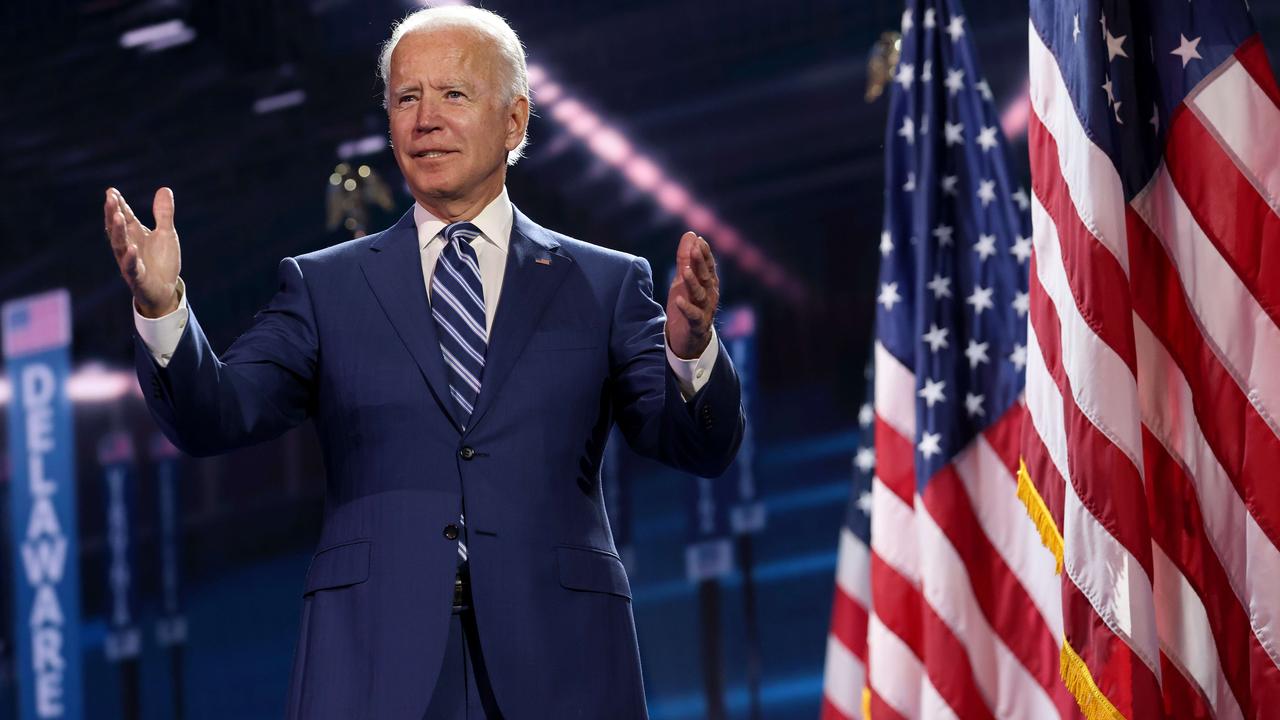 And this is where the punchline of the cartoon is contained. In baseball the pitcher is very important because they have to throw the ball and try and beat the batter. Three strikes and the batsman is out!

Pitchers have a selection of ball throws they like to use: a slow ball, a curved ball, the slider and the forkball are just a few.

For Joe Biden, I selected one of the nastiest balls of all to hurl at Mr Trump … the COVID ball.

The coronavirus cell, as we all know by now, is spherical* in shape and has all those spiky proteins sticking out of it. So I drew it as a baseball, which Mr Biden is about to pitch.

Why? Well the coronavirus has turned the world and America upside down. The US has suffered more than 170,000 fatalities* so far due to COVID-19 and the American economy has been devastated by it.

People are questioning if the President could have done a better job of managing America’s response to the virus.

It has seriously affected Mr Trump’s chances of re-election. The coronavirus could claim the Trump Presidency as its next victim.

So in the cartoon, Joe Biden is getting ready to pitch his COVID ball, one that will really test the batting skills of President Donald J Trump!

What the Moon landing and Trump have in common

HAVE YOUR SAY: What would you like Mark Knight to draw a cartoon about?
No one-word answers. Use full sentences to explain your thinking. No comments will be published until approved by editors.