Actors Emma Watson, Daniel Radcliffe and Rupert Grint in a scene from'Harry Potter and the Prisoner of Azkaban.

“Twenty years ago today a world that I had lived in alone was suddenly open to others. It’s been wonderful. Thank you,” she wrote on Twitter last year.

A special #HarryPotter20 hashtag and emoji accompanied the post. 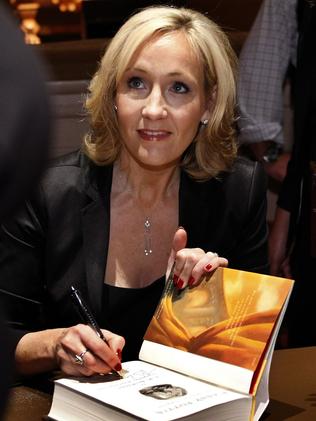 J.K. Rowling signs one of her books. Picture: AFP

Joanne Kathleen Rowling invented an entire magic world of witches, wizards, owls, goblins and more with an orphaned* boy, Harry, in the centre of it all.

He had a pair of rounded glasses, a lightning bolt on his forehead and no idea what kind of adventure Rowling had in store for him throughout the seven-book saga.

Rowling struggled through poverty* and a series of rejections from publishers before winning a £1500 ($2518) publishing deal with Bloomsbury to print 1000 copies of Harry Potter and the Philosopher’s Stone.

Little did she or her publishers know at the time, she was about to start a global literary phenomenon* which inspired a generation. Ron and Harry flying to Hogwarts in a bewitched car. Picture: supplied

Since then seven books have been translated into 79 languages and have sold more than 450 million copies worldwide.

“Harry Potter has had a huge impact on a generation of children who became so obsessed with reading that they would queue for hours to get their hands on the next book,” said Diana Gerald, CEO of the Book Trust. 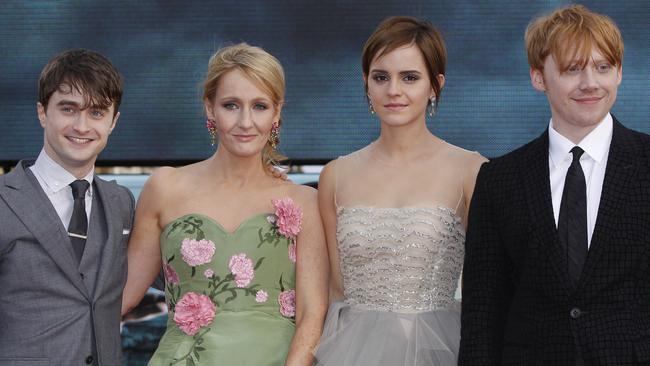 Rowling with the stars of the movies. Picture: AP

Pottermania over the past two decades has led to eight Harry Potter movies, the Harry Potter and the Cursed Child play and script and spin-off books.

In 2016 the offshoot movie Fantastic Beasts and Where to Find Them was released. Fans at the 2016 release of Harry Potter and the Cursed Child. Picture: Simon Bullard

The Harry Potter empire has earned Rowling — a committed philanthropist* — an estimated fortune of £650 million ($1 billion).

CLASSROOM ACTIVITIES
1. 21 years of Harry Potter!
Read or listen to the article carefully and complete the following activities.

Some information is in the article.
You may use other information that you already know or can find out to assist you.

Collate the results of your survey and present it in graph form.
You may be able to use the chart function in a word processing program or a spreadsheet to help create the graphs.

Write a statement based on your results answering the initial question- Is the Harry Potter series popular in your class?

3. Congratulations!
The article says that J.K. Rowling struggled through poverty and a series of rejections from publishers before getting a publishing deal that eventually earned her $1 billion.
Write J.K. Rowling a letter of congratulations on her literary achievements with the Harry Potter series and the impact she has had on a generation of children.
Make mention of the early struggles that she endured and how her writing continues to make a difference in many people’s lives.

Extension
Who is J.K. Rowling? Find out some more information about Joanne Kathleen Rowling.
Write a short biography about her life and achievements.

VCOP ACTIVITY
Author Study
Use facts from the article to create an author study celebrating the achievements of J.K. Rowling.  Set up a display in the classroom showcasing her work and books. Make it as eye-catching as you can to encourage your classmates to read the Harry Potter series.

Extension
Grab a copy of one of the Harry Potter books.
Read the first page and list all the WOW words J.K. Rowling has used.  Check the definition of any words that you are unsure of.

DISCOVER THE POWER OF WORDS

CASTLE UP FOR GRABS

HOW MUCH SCREEN TIME IS TOO MUCH?